I don’t know about you, but I love receiving gifts which you can enjoy later. Even better when the entire family is included. You see, I am big on the gift of experiences and memories rather than material goods. That isn’t always the case, but it is my general preference.  After being married 15 years, Alan is a pro at knowing exactly what I like. 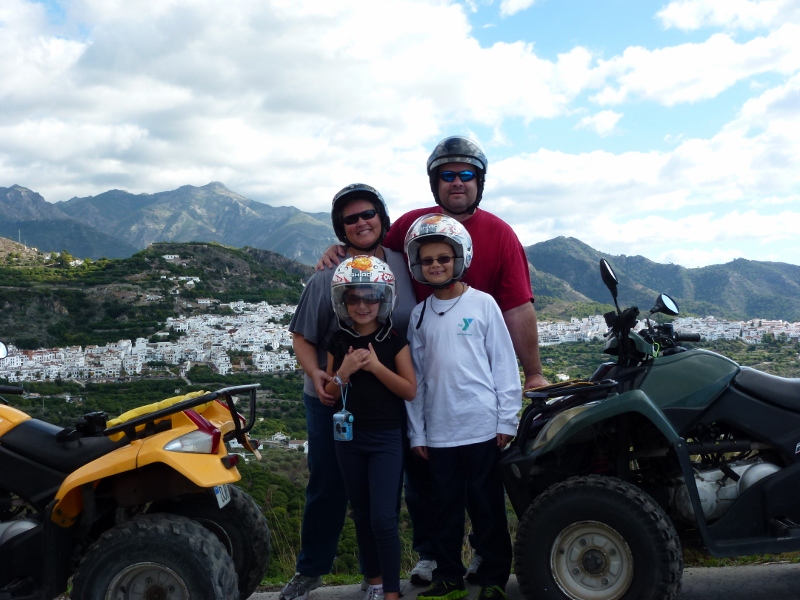 Earlier this week, Alan and the kids “gifted” me a Quad Bike Tour for my birthday. The plan was to go on this tour as a family just 2 days after my birthday. Due to unusual amounts of rain, we needed to postpone a couple of days. This was a bit of a bummer, but as you will see later was also an added bonus.

Late Saturday morning, we were all getting ready for our Quad Bike tour. We needed to protect ourselves while out in the elements, thus jeans and t-shirts were the clothing of choice. Alan was wise enough to pack spare clothes, but the rest of us figured we would be just fine. We hopped into the car and we were on our way to Frigiliana, a small white village nearby. On the drive, we commented how we felt “all dressed up” wearing jeans and an old t-shirt. Pretty sad huh? We have been wearing shorts for the past 6-7 months, so it was very strange to have on pants. I know, I know, life is rough!

We greeted our tour guide, Carl at the local school. We all hopped in his car and we were on our journey to the quad bike tour. After about 5 min of travelling on a single lane, bi-directional, part dirt/part cement, winding road, we arrived at his home in the countryside. After a little socialization and instruction we were on our way.  The Wagoner Adrenaline Junkies (Alan and Anya) were on one quad and the Cautious Wagoner Team (Heidi and Lars) were on the other.

Off we go on the winding dirt road down, down down. I must remind you that we have been having crazy rain the few days prior, so what was once dirt is really slippy slimy MUD!  We toured up and down and all around the hills and mountains in the countryside and the views were to die for. I did bring the camera along, but rarely took pictures. Those I have will be in the gallery. Some of the roads were were on were kind of paved and others weren’t.

Something they all had in common were very steep cliffs along the edge (200-300 feet down) and wide enough for one car.  Needless to say, I don’t like being near the edge and I could found it difficult to look down.  We drove through the smallest village I have ever seen “The Lost Village, aka: The Ghost Village”.  It was in the middle of absolutely nowhere!  This was the real Spanish countryside, without a doubt. There was one restaurant and a few homes. We zipped on through and headed to the fun part, WATER!

A Wee Bit of Water

It was about 70° out and partially cloudy, so I wouldn’t call it hot by any means.  But you get the Wagoner’s near water and we are in it!  We were at the bottom of the mountain and we needed to cross the river. Since it had been raining for a few days, it was likely a little deeper than usual. That didn’t stop us!  We blazed through that thing. Yep even me! In fact, I don’t think Lars and I had a dry piece of clothing to speak of.  We played in the water several times and then headed back to The Lost Village.  We had a little pit stop here and enjoyed a drink an the local family that lives in the village. Then off we went to the fort atop the village of Frigiliana and then returned back to Carl’s home.

Quad Bikes are a MUST DO!

Alan and I have rented Quads all over the place, in all sorts of weather (England, Mexico, USA) and it never gets boring. We typically aren’t the tour type, but you need one here to navigate or you could get lost for a good while.  This was a blast for us all and we would do it again in a heartbeat!  The tour company is planning some Quad treasure hunts soon, so we will check that out as well. We highly recommend doing this tour!  We have a brief video at the bottom.