As we’re traveling on our 8-week road trip throughout northern Spain, we figured that it was time to do some river activity.  We’re in the lovely Asturias region of Spain in the town of Arriondas.  And our activity is (drum roll)…canoeing on the Sella river.  We scheduled our trip with a great local company, Frontera Verde. 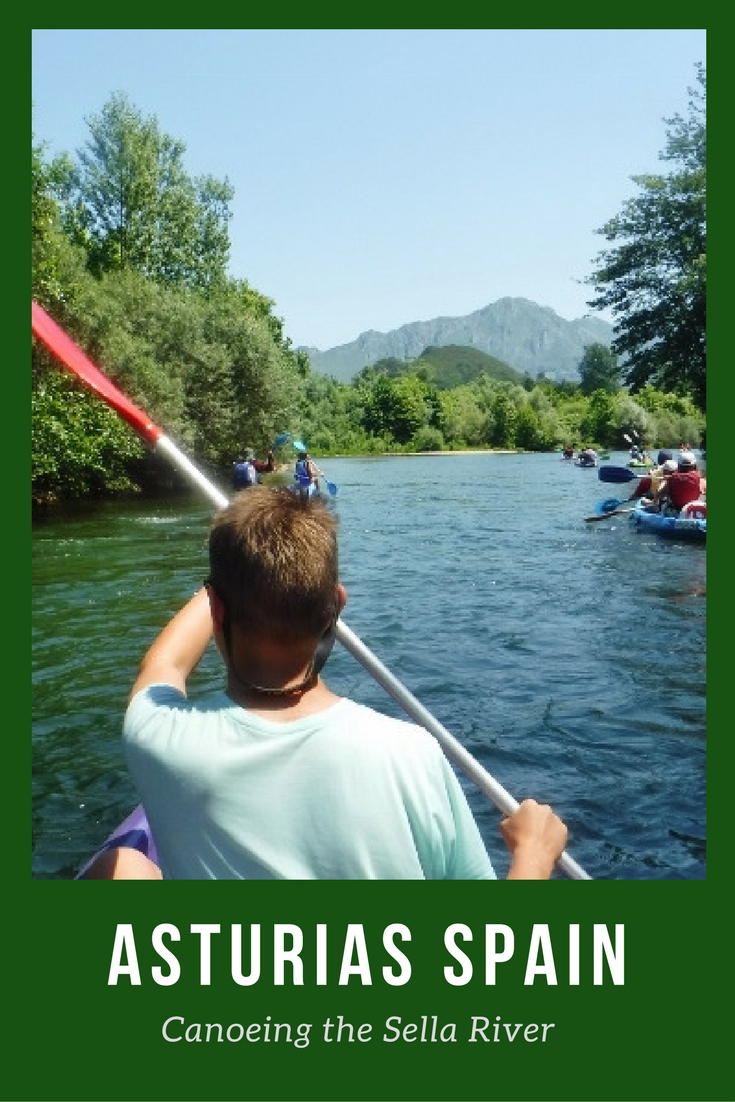 The Beauty of Asturias Spain

Driving through Asturias, it feels like you’re up in the mountains, but elevation here in Arriondas is roughly 100 feet.  There are many valleys, and it’s very green.  When we arrive in Arriondas, it’s obvious that kayaking and canoeing are popular activities here.  In fact, they’re so popular, that every year, the International Descent of the Sella competition is held.  It’s a canoe race down the river Sella to the coastal village of Ribadesella, 20 kilometers away. 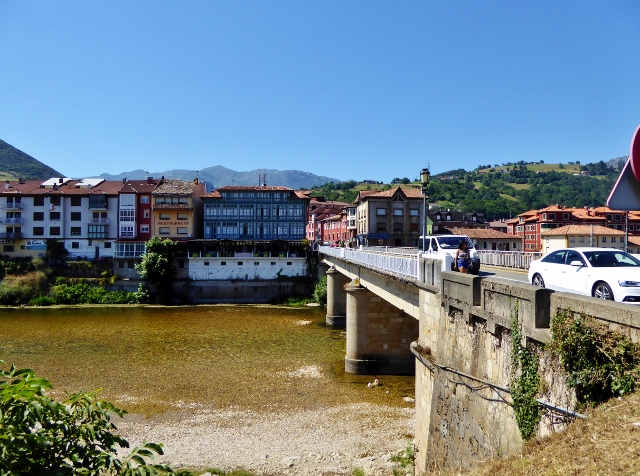 When we arrived at the facility, the prepping and planning was underway, and there were just two families (ours being one) heading out.  We were provided with two big plastic canisters (called drums) to store our belongings (towels, spare clothes, etc.), and they even packed all of us a simple lunch. 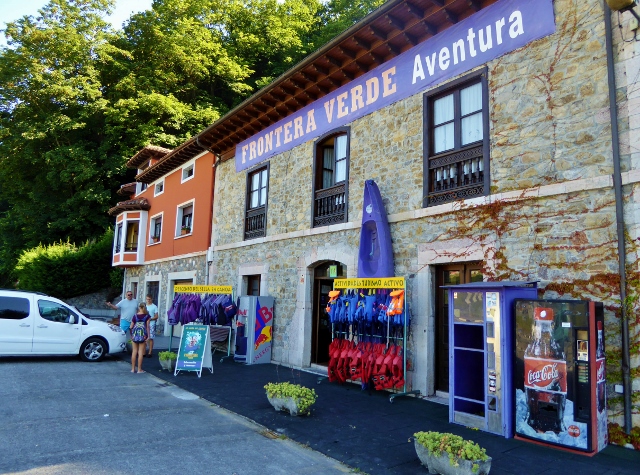 We were shown a map, and given a couple of options:

Of course we opted to go the long route!  The best part, we go down alone.  There’s no guide or timetable.  If we want to stop and hangout, we can.  Man I love flexibility.

Let’s Get On The Water!

Once the families have the lifejackets and drums, the van is loaded up with paddles, and we are off!  Our on-land journey took all of about 2 minutes, as the shop is conveniently located a stone’s throw from the Sella River and our hotel.

As we’re getting our gear situated and lifejackets on, we’re given instruction on the proper way to hold the paddle, and the best way to use it.  I didn’t know it (but it makes sense that I now think about it), but there is a proper way to hold the paddle, and to stroke efficiently.  We do some warm-up exercises, and then it’s time to choose sides.

The canoes we’re going to be using are big, stable, two-man jobbers, and right off the bat, both kids want to be paired up with the Big Engine.  That would be me!  Does it make me feel good to be so highly desired for my canoeing skills?  Well of course, but then it hits me that they probably just want me to be the only engine.  Nope.  Not going to happen!

Lars and I start out together, and we’re trying to figure out the best way of launching.  As I mentioned earlier, the canoes are large, so they’re very forgiving, and it’s easy to get going.  I should mention that the river is fairly low, and it only has Level I or maybe Level II rapids, so not dangerous at all.

There were a bunch of other people of various ages on the river, so this activity is truly for everyone but the very young.  We’re trying to stay away from the big groups, and just do our own thing.  Invariably we get caught up in a traffic jam every once in awhile, but we’re able to regroup.  It’s very relaxing and the scenery is absolutely gorgeous.  We are so Water People!

After some time, we decide to pull over, and rest, and cool down.  The river isn’t warm by any means, but it’s so refreshing to hop in, and just lay down on the smooth rocks while the water flows over my legs.  Ahhhh!  That, and we get to watch everyone enjoying the river. 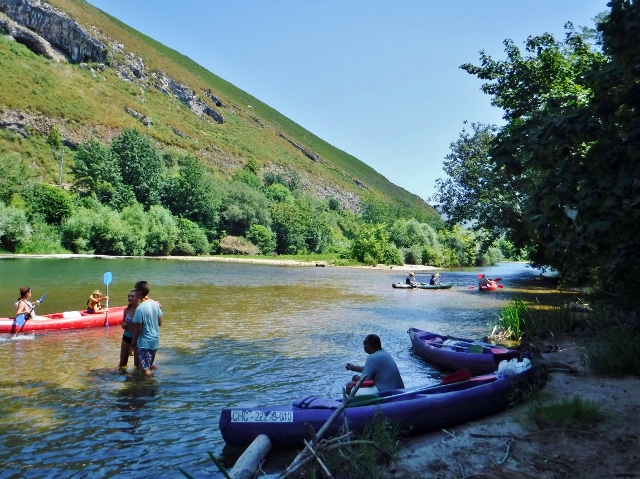 When we get back in the canoes, it’s time for the kids to switch engines.  Anya and I have kayaked together before in Puerto Rico, so we keep in a good rhythm.  There were a couple of accidents along the way.  You know the type…I was moving my paddle, and accidentally splashed the teensiest bit of water down her back.  And then she responded by “accidently” splashing me in the face.  Even the safest family activities are fraught with peril.

If you’ve followed our blog for any length of time, you know I’m a big (read: heavy) guy.  I may be a Big Engine, but the downside is when we hit the shallows.  Parts of the river are only 6 inches or so deep, so our canoe is dragging a bit.  Quite a bit actually.

It’s at that point where I tell Anya to turn her Little Engine up to 11, while I lean forward and paddle my butt off.  I would like to tell you that we made it all the way down the river without having to get out, but that would be a lie.  All told, I think there were a couple of occasions where either Anya or I had to pull the canoe out of the shallows.  This would probably super humiliating, but there are others out on the river who were much smaller than me, and they were getting stranded as well.

Anya and I make a good rowing team, and Heidi and Lars are doing well together, so we keep the same partners.  As we’ve been paddling down the river, there are areas along the shore where businesses have cropped up, and they’re selling food, snacks, and all manner of alcohol.  As the day progresses, we see the results of those imbibing said alcohol, and it’s pretty funny.  Luckily, the river is not too fast or deep, so we don’t see any accidents.

Whoops!  I spoke too soon.  Before I tell you what happened, let me first explain that the canoes are very good at floating, but not so good at changing directions.  They don’t exactly turn on a dime.  It is also good to note that the river is loaded with people canoeing.  (In the literary world, that’s known as foreshadowing…)

We’re doing our own thing, staying relatively close together, and during the most technical part of the river, there’s some rather large rocks in the middle, and it’s causing some of our fellow canoers problems.  Some are getting stuck in the rocks, while others are crashing into other canoes.  It’s not too bad, but it comes up on us kind of quickly.  We see an older lady struggling a bit to get to her feet.

We’re around the rocks, so the current is flowing faster than before.  Anya and I manage to just miss her, and I’m telling Anya that instead of trying to stand up where the current is running the fastest, she should just float downstream to get to the slower running water.  And it was about 50 feet later, that we see her husband outside of his canoe clinging to it and trying to walk upstream.  I’m guessing he was trying to help recover his wife AND steer the canoe.  He was not doing either of them successfully, and that’s when we slammed right into him.  We knocked him right off of his feet.  I had about two seconds to steer out of the way, and failed miserably.

Time For Another Break

I felt so bad, but there was really nothing we could have done.  Had I not been distracted by his wife, I would have seen him sooner and been able to miss him.  Plus I was a little disappointed that nobody else was helping either of them.  By the time we recovered our composure, we were a bit too far away to help. 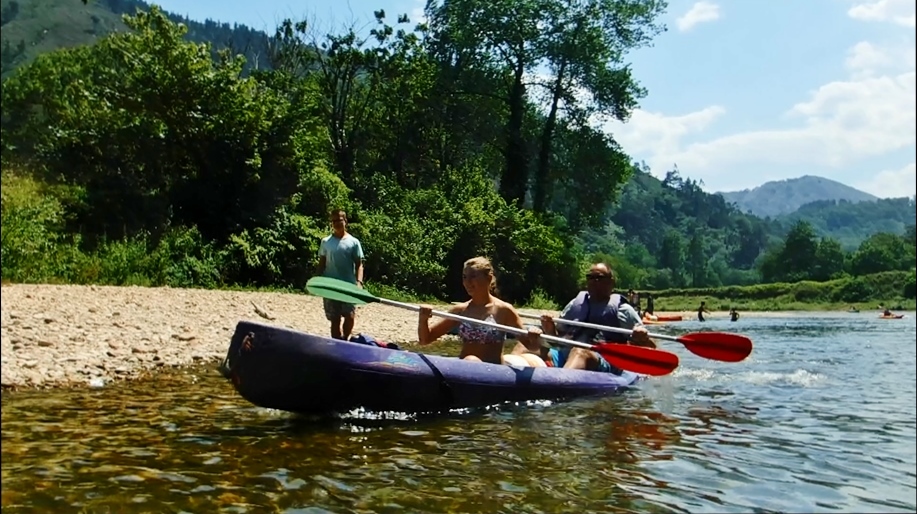 Now we are approximately two hours in, and my legs and arms are starting to sound off, so what does that mean?  Lunch time!  We pull over to a nice spot in the shade and break out the lunches.  Lunch consists of water, ham & cheese sandwiches, some crackers, and an apple.  After we’ve been paddling for hours and hours (really just hours), that apple tasted soooo good.  The crackers too!  As we’re eating, I’m watching, and waiting for the couple to come down and pass us, and either give us the international sign for:

“Please do not concern yourself about slamming into my chest.  We’re on the river, and Mother Nature has a habit of throwing obstacles in one’s way.  We have recovered and will continue our journey forewarned.  Be well fellow traveler, and enjoy the sustenance that you richly deserve.”

Either that, or the other international sign.  We never saw the couple again, but we were able to relax and recharge our batteries before heading out.  After another hour or so, with the afternoon sun out, I was starting to tire again.  And in the space of 30 minutes or so, two things happened that really irked me:

I will admit that the last kilometer was a bit rough.  Both Anya and were pretty tired, and around every bend, she asked, “Are we there yet?”, and I’m responded, “It’s around the next bend.”

We finally see our pickup spot, and that helped buoy our spirits, and we made a mad dash to the finish line as it were.  Once we got out of the river, and were able to stretch our legs a bit, we were pretty impressed with ourselves.  With very little canoeing experience, we paddled 14 kilometers!  That’s definitely going in our Wagoners Abroad highlight reel!  I enjoy these activities that bring us closer together.

Oh, and by the way, Anya and I beat Heidi and Lars! 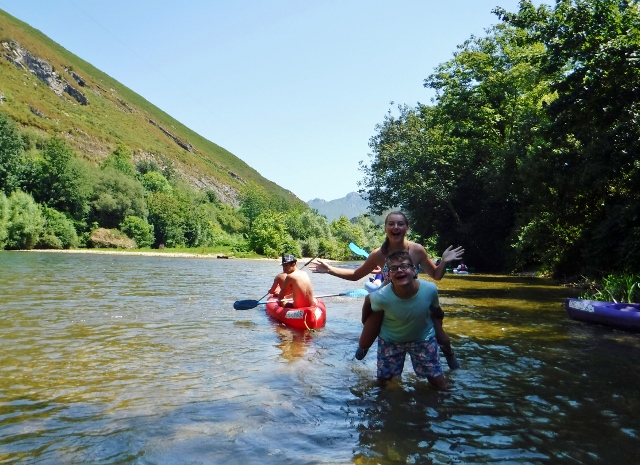 There are also many organized tours for you to enjoy from being active on walking or biking tour, to enjoying a food or wine tour.  There is so much to do and Viator has so many great offers for you.  Click here to see their latest  Spain Deals!

Disclosure: Our experience with Frontera Verde was provided by Trip4Real, and all opinions are our own.