Our final day in Portugal meant packing up and heading out.  Traveling in general is a bit more complicated than usual because we all have to make sure we pack all of our equipment (cables, cords, etc.).  It’s further complicated because we need to remember those power converter doohickeys.  They tend to blend into the sockets, so it’s very easy to leave them behind.

Once checked out of the hotel, we were on the road.  Doing some route investigation, Heidi came up with a rather unique, nay, bizarre thing to see on our way out of Portugal.  And I am not lying when I say bizarre.  I think it’s safe to say we pegged my Bizarre-o-Meter at about 11.  I think it’s also safe to say that this is a multi-national, multi-cultural meter, so bizarre for me is bizarre for anyone and everyone. 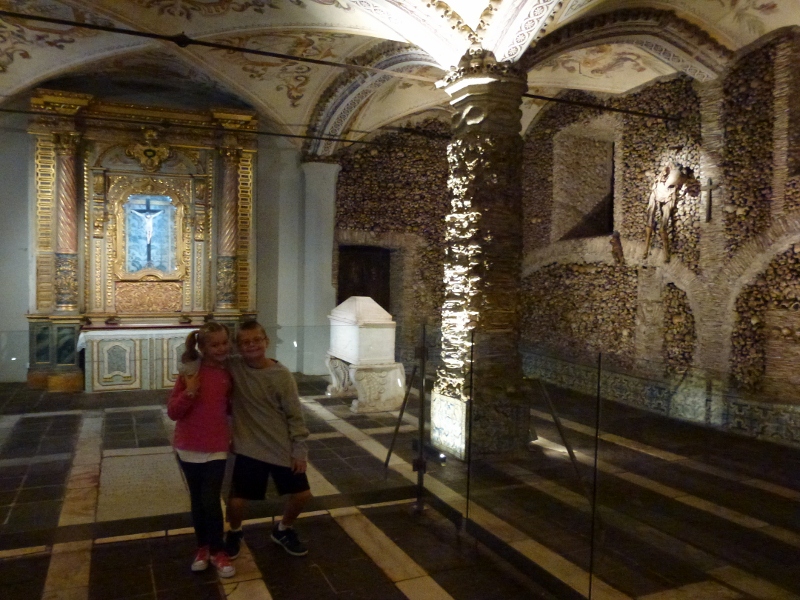 “So what was it?” you ask.  It surpassed the 10 foot ball of twine, the largest pair of shoes, and that famous truck stop where Elvis went to the bathroom.  In the local (remember Portuguese) vernacular, it’s called Capela dos Ossos.  That’s Chapel of Bones to you and me.  So like any tourist attraction, you pay your money to the friendly greeter at the front, walk in, see what you’re going to see, stand in amazement, etc. etc. 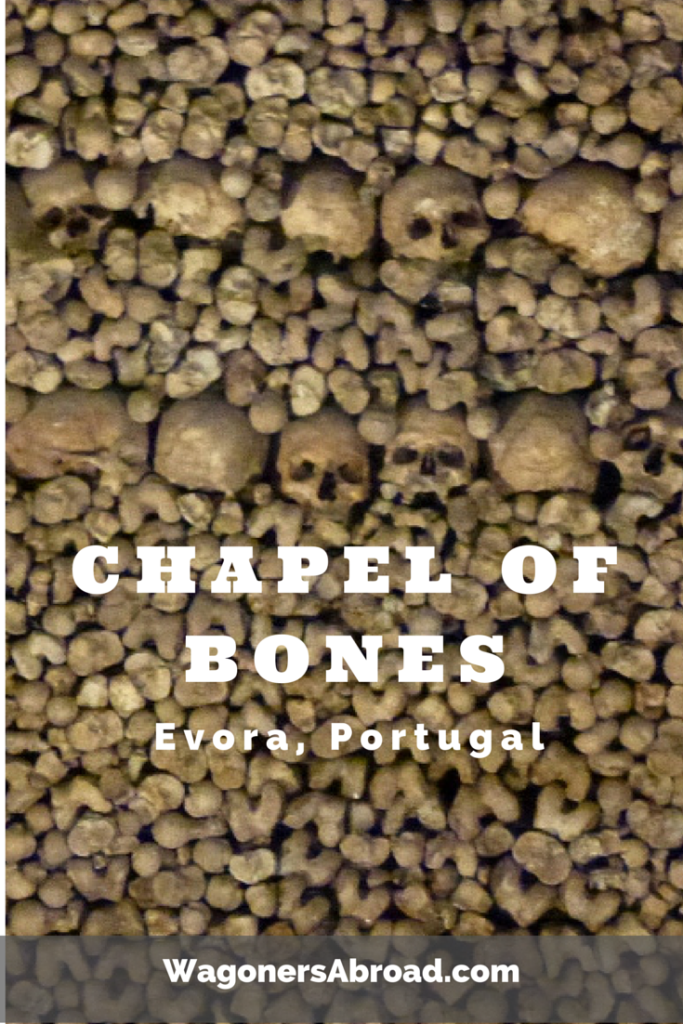 This place was a tad different in that you walk into a small chapel, and there are literally thousands of bones in the walls and columns.  In the walls, the leg bones (femurs) are placed such that you see the end of the bones, not the length of it.  Oh, and there are skulls used as ornamentation as well.  On the columns, the bones are arranged so that the entire bone is visible.  Yeah…bizarre!  The Franciscans must have been drinking or smoking something, because I can’t for the life of me figure how someone (let’s call him Idea Guy) would propose such a novel use of human remains, and then some lackey would agree that it’s a good idea.

By the way, that Portuguese up above?  It means We, the bones that are here, await yours.

Side note: So there is an interesting dynamic that exists between a brother and sister. I’m an only-child, but having two kids has put me in a position of seeing this dynamic first hand. This Torment Dynamic consists of one sibling tormenting the other in a not-so-nice manner. If I were looking for a scientific analogy, it would be like a magnet with a north and south pole. In this situation, the poles would be Sister torments Brother and Brother torments Sister. Today, the needle swung to the Brother torments Sister position. When our daughter asked, “Where do all the bones came from?”, Our son told her, “8-year olds”. What can I say, he’s my kid. I take 50% responsibility.

Those who know me, know that I’m not a Church type of person.  I’ve gotten past the worry of spontaneously combusting when walking into a church, but this gave me the willies.  It was interesting to see, but I’m not sure I would do it again.  The town was quaint, but I wouldn’t go back just to see the Chapel.

With all of us creeped out, it was back on the road.  After about another 30 minutes of driving we were back in Spain. Since we had a lot of ground to cover, I did a quick search of the nearest big town of Mérida.  And I discovered it had a World Heritage Site consisting of a Roman Theatre and Amphitheatre.  We got there just before they shut down for siesta, and found out they only take cash.  Guess what?  We only had enough cash for 1 adult and 2 kids.  The nearest ATM was blocks away, so what did I do?  I went in and left Heidi all by herself of course! 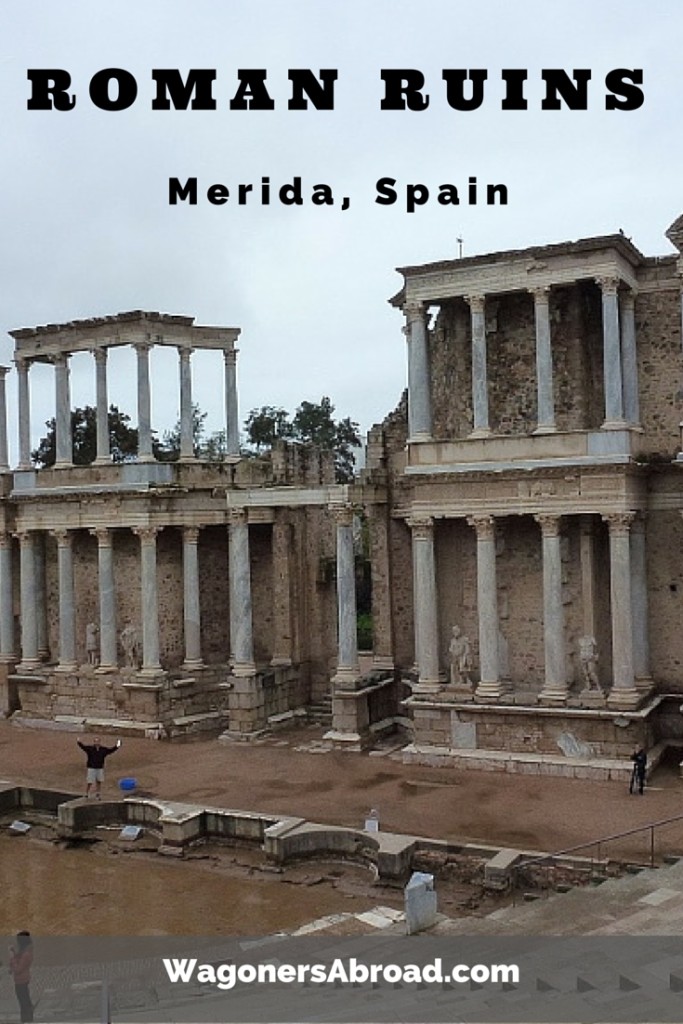 Actually, while we were trying to figure out what to do, a very nice Spanish man gave us a 10 Euro note.  Heidi and I were not going to take it, but he insisted.  We relented, and I asked him for his address so that I could send him the money.  He gave me his card, and we both thanked him, paid the entry fee, and we were in!

Side note: When traveling, and with life in general, I try to be as helpful to strangers as possible. Today that came back to help us out. So for all of you readers out there, I want you to wish some serious Good Karma towards Juan A. in Madrid. He’s the guy who helped us all get in to see the site. A big Gracias goes out to Juan!

Once we were in, it was absolutely astonishing!  World domination, slave trade, and barbaric customs aside, the Romans knew how to build amphitheatres.  This particular one was built during the reign of Augustus and completed in 15 B.C.  To see the setting, and imagine the gladitorial combatants was incredible.  Given that it’s over 2000 years old, the stands (cavea) were in surprisingly good shape. After the kids and I enacted a few battles (I won, of course), we walked over to the Roman Theatre.

Again, it was an incredible sight to behold.  As I stood on the stage, and looked out at all of the imaginary faces of people garbed in Roman attire, I spoke aloud, “Friends, Romans, countrymen, lend me your ears…”

Of course, none of the real faces knew what I was saying (I’m speaking English in Spain), but Heidi and the kids could hear me from where they were standing.  To think of all of the Greek/Roman tragedies and comedies that have played out on that stage was amazing.  I probably enjoyed it the most, but I think it’s safe to say that all of us enjoyed the travel diversion.

As I write (OK, type) this, we’re on the outskirts of Sevilla on our way home. We’ve got another three hours of driving to go, but it was a good day, and a great trip!