It’s another lovely tasting for us, this time French wines.  This is not a typical large-scale winery, but a tiny new winery.  It’s at Domaine des Amiel, and it is literally outside our front door and under our apartment.  So Heidi and are ready to start enjoying Montblanc wine!

So before I get to the wine part of this post, let me tell you where we’re at.  We’re in the small town of Montblanc.  Now that’s probably not the place you’re thinking about.  You’re probably thinking of Mont Blanc.  That one is in the Alps, and over 500 kilometers away from us in Montblanc, which is close to the Mediterranean coast.

Where is the Where?

Now that we have the WHERE covered.  Wait…Let me show you the where proper WHERE is.  It’s easier if I show you on the map, as you can see it is just about 45 minutes south of Montpellier France.

Technically, Montblanc is a commune (the French meaning), which is roughly equivalent to a municipality.  With a population of roughly 3000, it’s small, even by Almuñécar’s standards.

Heidi found our apartment through Airbnb, and the owners are two brothers, who also happen to have a small winery.  Talk about fantastic luck!  (Actually, it’s 95% Heidi’s hard work, 4% luck, and 1% my good looks…)

The Making of Wine

As I mentioned above, the winery is called Domaine des Amiel, and it’s run by Aymeric and Jordan Amiel.  Their family has been in this particular area of France for at least 14 generations, so their roots really run deep in the community.  When we met Aymeric, it was readily apparent that he’s very proud of the work he and his brother are doing, even though they haven’t been winemaking long.  They are proud to be certified as permaculture farmers.

As Aymeric describes in his bio, the work of a winemaker, is actually 4 jobs in 1:

Not only are the Amiel brothers doing the wine thing, they’re also opening a small restaurant right next to where they do the winemaking.  I guess he’ll have to add Restaurateur to his list. 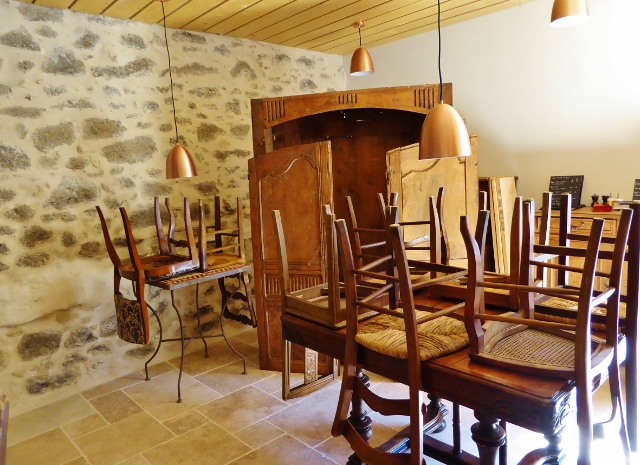 Prior to the tasting, Aymeric showed us where they do all of the winemaking.  He explained all of the construction they’ve had to do, and showed us the vats that house the wine.  The vats had movable or floating caps to seal out air from the wines.  I’d never seen them in use before, but it allows a lot of flexibility when making wine.  They do all of the mixing, and testing in-house, and I was surprised at how much technology they used in their pursuit of making great wines. 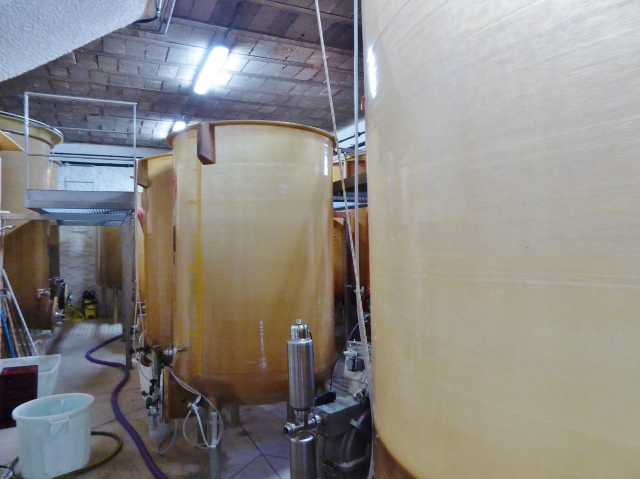 Throughout the tasting, he explained the brothers’ philosophy on making wines.  They want to make wines in an eco-friendly, sustainable way, that are great to drink.  And boy did they nail that!  They were also wanted to make sure that their wines were affordable, so that they’re accessible to all manner of wine drinkers. 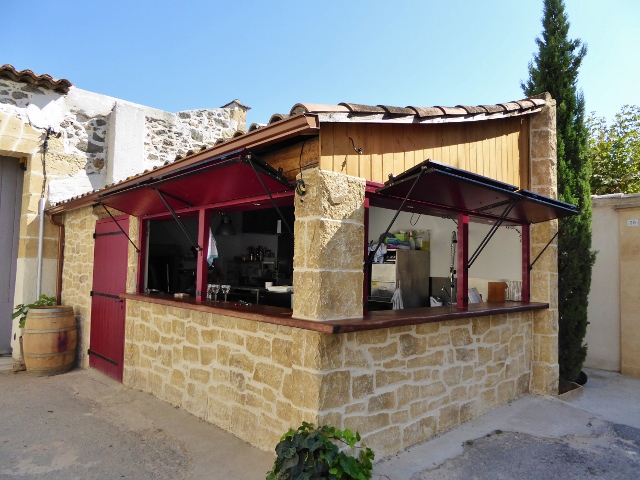 Heidi asked if their winery ever has “WWOOF Workers”.  I was thinking, “What the heck is a woof worker?”  It turns out that WWOOF, or World Wide Opportunities on Organic Farms is what she was talking about.  I had never heard that term, and
it’s basically a loose network of national organizations that facilitate placement of volunteers on organic farms.  The idea being that someone may want to volunteer their time/experience in exchange for room and board.  A great concept where everyone’s a winner!  The answer was “yes” they do have WWOOF workers come and help!

Our Favorites of the Tour

During our wine tasting, Aymeric brought out 8 different wines.  They have two lines of wines.  The Heritage Range are what the typical wine connoisseur might expect.  The labels and the wine reflect family members and their heritage.  For example the plow represents their grandfather and all of his hard work in the past.  The baby carriage is for the new baby in their family and a young wine. 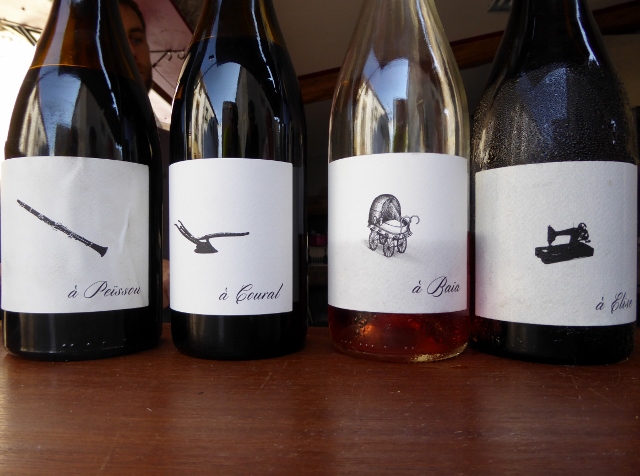 They also have the Brothers’ Range, which is more open to experimentation and fun.  Looking at the bottles’ labels, you can tell that a lot of thought has gone into the individual branding within the lines.  There are some great stories behind the label artwork!  They are often a play on words and very well thought out.  For example: the Mounto Daballo is a play on Lucky Luke (A cowboy known as the “man who shoots faster than his shadow”). 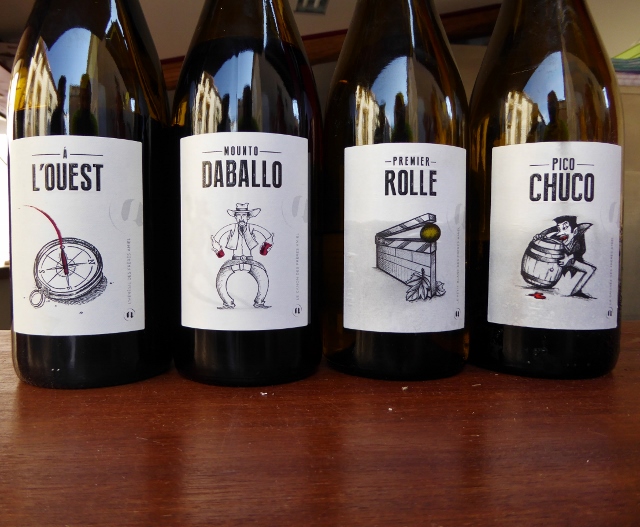 All of the wines were very good.  There were a few standouts however.  I would say that I preferred the wines in the Brothers’ Range.  They were very different tasting, and go beyond the traditional wines that I’m used to.

For the Heritage, our favorites were:

For the Brothers’ Range, our favorites were:

And if I had to pick a favorite, it would probably be the Mounto Daballo.  Or the Pico Chuco.  I don’t know…it’s just too difficult to pick only one favorite.  The sell their wine all over the world, so be on the look out or check out their website below.

This was one of the most fun and educational wine tastings we’ve had.  We’ve seen the large wine producers, so it’s refreshing to see two brothers making wines the way they want to do it.  I truly hope their endeavors are fruitful, and I would love to come back to see their progress. 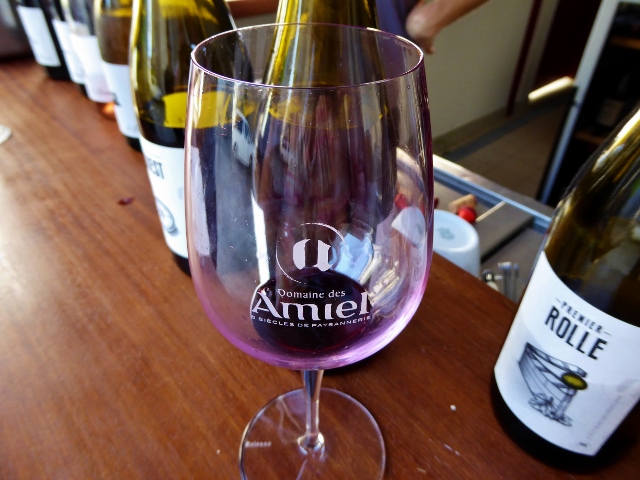