I give you all fair warning that this will be a different kind of post.  It’s about the card game Twenty One (Blackjack).  There, you’ve been warned.

One of the things that’s interesting about being a parent with multiple kids, is that I get to see different thought patterns at play, for example, boy mentality vs. girl mentality.  Last night I saw some interesting dynamics, which was kind of funny. 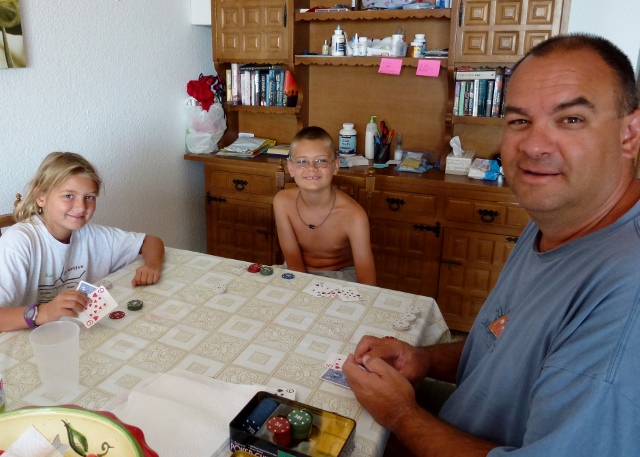 This all started during our Summer 2013 Road Trip.  We brought a deck of cards with us, and you can only play Go Fish so many times, so I taught the kids Speed.  We had a blast with that, but it’s more of a two person game.  To get everyone involved, I taught the kids 21.  Blackjack!  Now I know you’re opinion of my parenting wisdom probably dropped a few points, but stay with me.  Part of the learning was that I was having Anya count everyone’s totals to work on some math skills, and to get the kids thinking about probability and gaming strategies.

The kids did very well, but one of the key things that was missing was the betting aspect of the game.  After all, when you’re playing with money (or it’s equivalent), it changes the nature of game.  We didn’t have chips or enough coins to use while we were traveling, and I commented frequently that we should play with chips.  So I was very surprised when I got a kit of chips for my birthday.

I must say that our first game using chips confirmed my thoughts on how the kids would play.  It was funny to see the gears in the brain cranking away.  I gave both kids an equal amount of chips.  Ten Ones, five Fives, and one Twenty-Five.  These are Euro denominated chips, so that added a bit of novelty.  I set the minimum bet to 2 Euros, and the fun began.  Both of the kids did the minimum bet at first, but once they understood that they could bet more, that’s when things got interesting.

Anya upped her betting, while Lars stayed at the minimum.  Once she had won a few, she bet big:  25 Euros!  Lars was telling her not to bet that much, and unfortunately she lost.  After about 10 or so hands, Anya was a little below what she started with, and Lars was a bit up.  It was getting late, so I announced the final hand.  Anya without pausing, pushed all her chips in.  And Lars bet the minimum.  I told him that this was the last hand, and he may as well bet everything.  He was so reluctant to do it, and I had to explain that we would be done for the evening, and finally he was all in.

The final hand, I pushed (tied) with Anya, and Lars won!  He was so excited, and wanted to count all of his chips.  It was so funny.  It was like he actually won real money.  After he counted his winnings, we put the chips and the cards away, and the kids were asking if we could play again the next day.  They were following me around buzzing with excitement.

This is when I got devious.  I suggested that we should play with real money.  I would take $100 out of each of their savings accounts.  It’s only a small percentage of their total savings, and using real money would make the games even more interesting.

Immediately, Anya started thinking about how much money she was going to make, and Lars went the other way, and didn’t want to lose any of his money.  This little exercise confirmed what I already knew:

Lars is risk-averse, and Anya is not!

The big lesson was not to gamble in real life.  I hope they understand and follow it, but it was a lot of fun watching them think through the implications of betting.

Stay tuned for next week’s Life Lesson where I discuss Playing with Fire.