We have officially recovered from our trip to Paris, and today we decided to visit the local olive oil factory.  It’s only about a 15 minute drive, so we all piled in the car and drove up the windy road to Otívar.  We also wanted to see if we could find the people we ran into the last time we visited and see how Olive Oil is Made. 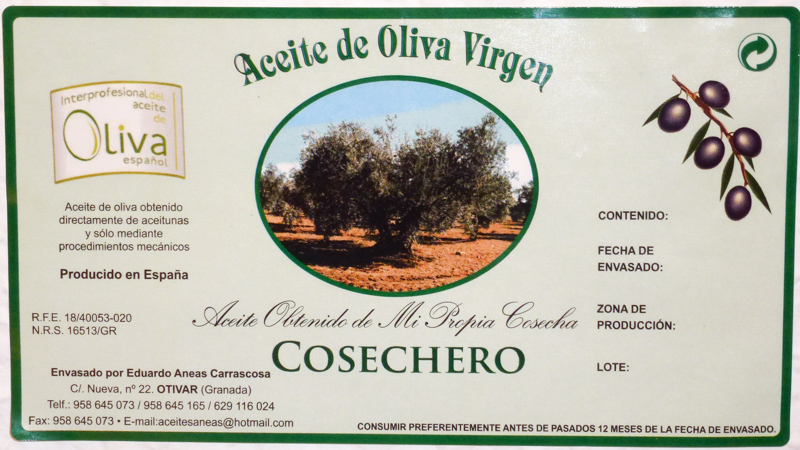 If you recall in an earlier post, we met a nice family who was picking olives.  I took a bunch of pictures, and tried to e-mail them to one of the brothers (Paco), but the e-mail address I had was not correct.  It was my hope that we would somehow get Paco’s correct address, or phone number of something.

Once we got to Otívar, we we looked for a tiny road that led to the factory (Fabrica de Aceite Virgen Extra).  Not only was it a tiny road, but it was very windy and very steep.  Heidi was the passenger, so she was the one who had the death-defying view.

After some zigging and zagging, we finally made it to the small factory.  Once there, there were a few people milling about.  There was a young man standing in a container, shoveling what looked like olive leaves.  I asked him if we could take a tour.  He said yes, and indicated to just look around.  I wasn’t sure if I understood him correctly, and he got out of the container, and again motioned for us to look around.

I asked him if he knew Paco.  He said no, and indicated that the factory was run by the Aneas family.  This wasn’t an official tour, so we started to look around, and saw many conveyer belts which moved the olives to the various parts of the factory.  Walking further along, we see people congregating around a room.

Inside the room is a man sitting on a chair, and his in front of the “pouring machine” filling a big plastic bottle with…olive oil.  It was pretty cool.  We were in the pump room, and there were several bottles already filled, and many yet to be filled.  There was a lady waiting for her bottles to be filled (5 gallon size), and they both suggested that we take a taste.

I motioned with my finger, “dip my finger in it?”.  They nodded.  So I dipped my finger in the free flowing liquid, and tasted.  “Yum!”, I said.  I don’t know the Spanish word for yum, but they got the point.  I then acted like I wanted to drink from the fountain, and they laughed.

We wound up buying (and probably overpaid) some oil.  This was a cool little factory!  It seems the locals just show up with their plastic bottles of all sizes and “fill ’em up”.  Of course they pay for it.  It was great to know that the olives we picked a few weeks ago ended up in this factory to become olive oil.  Who knows, maybe it is the bottle we purchased.

While were weren’t trying to find Paco per se, we were trying to find a family member who knew him, and could provide me with his e-mail address.  Or, conversely, pass on my contact info.  The workers at the Olive Oil Factory suggested we inquire at a local restaurant.  It is run by two Fajardo brothers, so a good place to start.  These are not the brothers we ran into, but much older (uncles?).  At the restaurant, we asked one of the brothers if he knew Paco.  “I am Paco”, he said.  With both Heidi and I talking, we said that we were looking for a Paco with a younger brother and sister, all of them in their 20’s / 30’s.

The man thought for a moment, and asked, “Rubio?” while pointing at Anya’s head.  “Is this Paco blonde?”.  I thought about it, and nodded that yes, the Paco that we’re trying to find is blonde.  He suggested we go to the farmacia (pharmacy) in the center of town and ask there.

We drive a little bit, and walk a bit, and find the pharmacy.  I’m in line behind an elderly gentlemen, and when he’s finished, I ask the lady behind the counter if she knows Paco Fajardo or his mother, and I show her a picture of the Fajardo Mother.  I tell her that I’m looking for the Paco that has a sister and brother.  The lady is a bit suspicious of me, but the gentleman she was helping says, “I know where she lives.”

I walk out of the pharmacy with him, and he tells me she lives in the last house on the right. What the heck?  What’s the worst that can happen?  I walk down, ring the door, and it’s the Mother who opens the door!  She doesn’t recognize me at first, but then it comes back to her, and she says (in Spanish), “Oh yes, the American family who helped us pick olives.”

I explain to her that the e-mail address that Paco gave me didn’t work and I wanted to get him the pictures I took.  She invites me in, and the daughter is there, along with the Mother’s mother.  Cool!  So I get the daughter’s e-mail address, and she has her computer out, so I break out the USB drive that I happened to bring.  She pops it in her laptop, and starts copying.  While copying, I ask the family names.

There is the father, Paco, the older son, Paco.  The younger son, Felipe, the daughter, Maria, and finally, the mother, Maria.  They smile as I understand the whole father/son and mother/daughter naming, and I say, “Es muy facile!” (it’s very easy).  We all laugh, and I write down our blog, and tell them how to search for the article I wrote.  It’s a bit complicated, so the daughter pulls up Google translate, and I type what I’m trying to say, and the Maria’s understand.  Thank you Mr. Google!

The younger Maria shows me pictures she took of her and her mother’s trip to the Alhambra in Granada, and they were very beautiful.  They suggested that I take the family there as it’s very tranquil.  Once the files are copied, I say thank you, shake their hands, and say goodbye.

I am very pleased that the Fajardo family will be able to see the pictures I took.  And we have some locally grown and harvested olive oil.  It’s a great way to start the new year!

4 thoughts on “How Olive Oil Is Made”