It has been a long weekend here celebrating Spanish Holidays.

Sunday’s are usually quiet.  Heidi ran across an article which described a quaint Christmas Market at a mansion in the hills very close to Almuñécar.  So, we decided to take a mini road trip through Costa Tropical.  The palace is called Palacete de Cazulas (Cazulas Mansion).  It’s a swanky country residence with beautiful grounds and chapel.On the way to the mansion, we passed this gentlemen, and had to stop and take a picture. 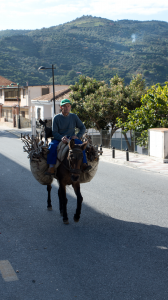 The drive into the hills was on some very narrow roads, which can make for some breath-taking views of the “Don’t drive off the road!” variety.  Actually, once you get over the fear of plummeting to your death, the vistas are quiet spectacular.  I’m still amazed by the terraced farming that’s done here.  It’s absolutely gorgeous.

Once we arrived at mansion, we made our way to the Christmas Market.  I will be honest.  It was a bit of a let down.  There was a medium-sized room with people selling handmade necklaces, crafts, etc.  At one table, I pointed out a nice necklace to Anya.

Alan: Isn’t that beautiful?
Smiling Vendor: I am beautiful, aren’t I?
Alan: Ooops! Did I say that out loud? I have to work
on my Inside Voice.

We had a good chuckle over that exchange.  She was a Brit, and I do so enjoy their sense of humor.  The kids found a vendor who was having a “Guess the Number of Candies in the Jar” contest.  So for 50 cents, the kids made their guess.  We didn’t win.  I wound up buying a slice of toffee cake which was very nice.

Once we were done looking at the mansion, we decided to head home.  Anya had plans to go to a birthday party, and she needed to get ready.

Remember my post where I wrote about how we sort of luck into things?  Well, sometimes you have to make your own luck.  As we were driving home, I spotted a group of people, and they were harvesting something from the trees.  I asked Heidi to stop, and once she found a safe place to park, we started walking down the path to see if we could talk with them.

As I’m walking down the path, I’m thinking:

Good.  I keep walking.  I get about halfway down, when they notice me, and they’re probably wondering who the hell is this guy?  In Spanish, I ask them if it’s OK to watch what they are doing and take some pictures?  They were very friendly and said “Sure!” (in Spanish).  As we’re watching them, we start to talk to them, and it turns out that they are a family.

The “kids”, (two men and a woman), look to be in their late twenties/early thirties.  One of them (Paco) realizes that my Spanish is not so good, so he and I have a discussion in Spanish/English.  For the rest of the family we needed to speak in Spanish.  We ask what they’re doing, and it turns out that they’re all harvesting the olives from the trees.

I ask the mother if it’s OK to take pictures of her, and while she seemed a bit embarrassed, she gave me the OK.  She started telling us that her kids are here to help with the harvest.  Paco told me this is what he does “on holiday“.  I got a good chuckle out of that.  The mother informed us that both of the “boys” are professional workers (one is an architect).  I don’t remember all of the information she said, but she was obviously very proud of her brood.

While this is going on, Heidi asked if the kids could help pick olives. They all said “Yes” at the same time and were thrilled for the helpers. Lars and Anya start helping them pull off olives.  They surround a tree with a durable fine net, and just pull the olives off, and let them fall on the netting.  On the smaller trees, they use a bucket. They said it will take about 2 weeks to get all of the olives.

The Father comes over, and starts talking to us, and he tells us he has family in Kaui Hawaii, and talks about California.  He then points out the location of the olive oil factory just across the ravine. He, Heidi and the Mother have a long conversation about us going to see the olive oil factory and how these trees have been in their family for over 3 generations.  They have lived in this town their entire lives, except the Mother, lived in France for some twenty-odd years, and speaks French.

Anya and Lars are very excited about this, as we have been practicing slightly for our trip to Paris this month.  Each of the kids as her a question in French “How are you?” and “Do you speak English?”.  The Mother was tickled and continues with a (very) mini conversation in French.  Heidi explained to them that the kids desire to learn several languages, so it is good to practice when we can.

Paco asks if I could e-mail him the pictures that I’m taking.  I agree, and get his address.  It turns out that the family’s surname is Fajardo.  You will see the Fajardo name on produce trucks here.  I tell Heidi that the family name is Fajardo, and we’re both impressed, until the Mother tells us that “Fajardos are everywhere!”.  In fact, the entire town is full of Fajardos, but we are still impressed.

We decided we have intruded on their family work long enough and we are pushing it for time to get Anya back to her party.  We climb back up the hill and head for home.  The kids were bursting with energy and said that was “the best day ever!”.  I think they had a good time, actually we all really enjoyed it.  Just goes to show you that you have to step outside of the box sometimes and make something out of nothing:  a drive on a winding mountain road turns into an olive lesson.

We plan to return to the olive oil factory very soon, as they are pressing olives for the next couple of months.  It is only about 20 minutes away and they said we could go any day we like.

5 thoughts on “Spanish Holidays and an Unexpected Surprise”