In Spain the Holiday Season doesn’t end with New Years.  In fact, many of the locals were most excited about January 6th, Dia de Los Reyes (Day of the Kings).  It seems this is the Grand Finale to the Christmas season, or the end of the 12 Days of Christmas.  The night of the 5th, children leave out their shoes.  When they awake the morning of the 6th, they find presents from the Three Kings.

Dia de Los Reyes commemorates the arrival in Bethlehem of the three Wise Men (Magi):  Balthasar of Arabia, Melchior of Persia, and Gaspar of India.  They followed the Star of Bethlehem bearing gifts of gold, frankincense and myrrh for the baby Jesus.  I won’t get too deep into any religion here, but you get the idea.

The eve of Dia de Los Reyes there is typically a celebration in the streets.  Our little village of Almuñécar did have a procession scheduled, but we decided to see if either of the “bigger cities”of Granada or Malaga had anything going on.  With a little research, it was determined that Granada really put on a good parade on this eve (The Cabalgata de Los Reyes).  This was now our destination of choice for the celebration.  Granada is about 50 minutes away and is full of things to do. We will have to get into all of that another time.

The parade was to begin about 5:30pm and last about 3 hours.  We wanted to explore a bit of Granada first, so we left the house around 1pm.  We managed to spend a few hours walking around the Albayzín (also Albaicín or El Albaicín), the Moorish quarter of Granada.  Then about 5pm, it was time to find a spot along the parade route.  We didn’t know what to expect, but as we approached the starting point we could see nothing but a sea of people.  At this point we opted to head down several blocks and catch the mid-section of the parade route. 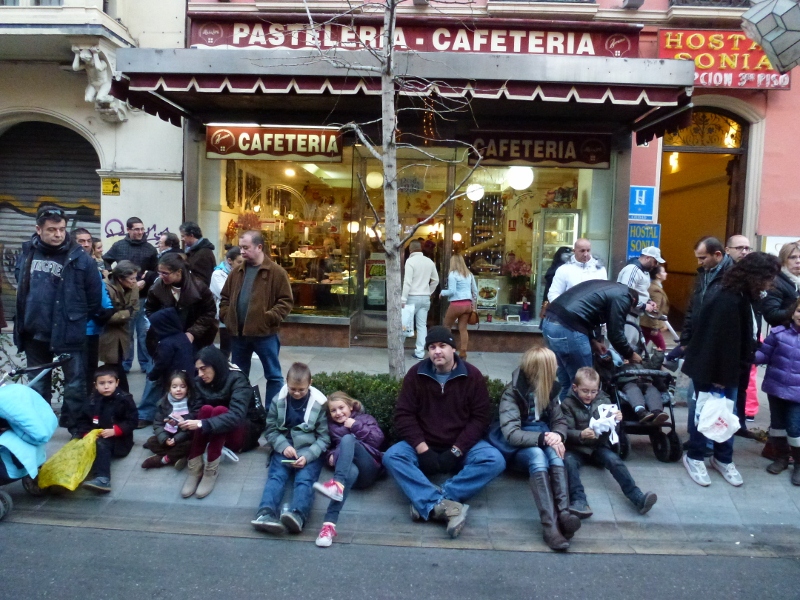 This of course meant we needed to wait for the parade to get to us.  At least there was plenty of elbow room and the the temp was still in the upper 40’s out.  As time goes on, the street fill with more and more people.  We are now deep in our own sea of people, there’s no moving or going back now.  We have prime spots right on the curb with bushes behind us.  After about an hour and the temperature dipping quickly, we can see balloons off in the distance.  There are Police escort lights flashing and we can faintly hear the beat of drums.  It’s coming!

The kids are so excited as is everyone around us.  We notice that all of the local children each have some sort of plastic bag or sack they are carrying.  What is going on?  The parade approaches and the music is louder.  The energy fills the air and we are no longer aware of the dipping temperatures.  People are singing dancing and full of happiness.  The first massive float comes by and they are throwing CANDY!   Now we know what the plastic bags are for.  Each float passing by for over an hour was throwing candy everywhere.  It felt as if it was just raining candy.

All of the kids were frenzied.  Imagine how kids are with one piñata, and this was an hour plus of the piñata experience.  Candy was landing on my head, on the ground, on my chest (yep, i caught some on the chest).  Alan was just as giddy as the kids. With his height, it was as if he was a candy magnet.  The kids and Alan had all of their pockets and even their hats filled with candy.

The parade itself was quite entertaining. They had floats that depicted each of the Three Kings as well as the gifts they brought.  There were groups of people or bands in magical, religious, belly dancing, Bedouin or clown type costumes.  They were dancing and throwing candy from absolutely every direction.  We even got to see Sponge Bob.  There were many more, but I can’t remember them all.

One very memorable float came with very loud fun music.  The entire crowed was singing and dancing along with it.  As it approached it was full of people dressed like chickens. We couldn’t stop laughing.  I think it was the Spanish equivalent of “The Chicken Dance”.  All people young and old were happily participating in the song and dance. It was a great experience and we managed to exit with the sea of people and work our way back to the car.  We so enjoyed this experience and are pleased that we made the day trip.