Greetings One and All.  I must be the luckiest guy on the planet.  “Why?” you ask?  Because I get to do super cool stuff and then write about it.  So what’s on tap today?  A Sailing charter in Costa Tropical!  And if you’re one of those impatient types who want to skip ahead, well then yes, we had a great time! 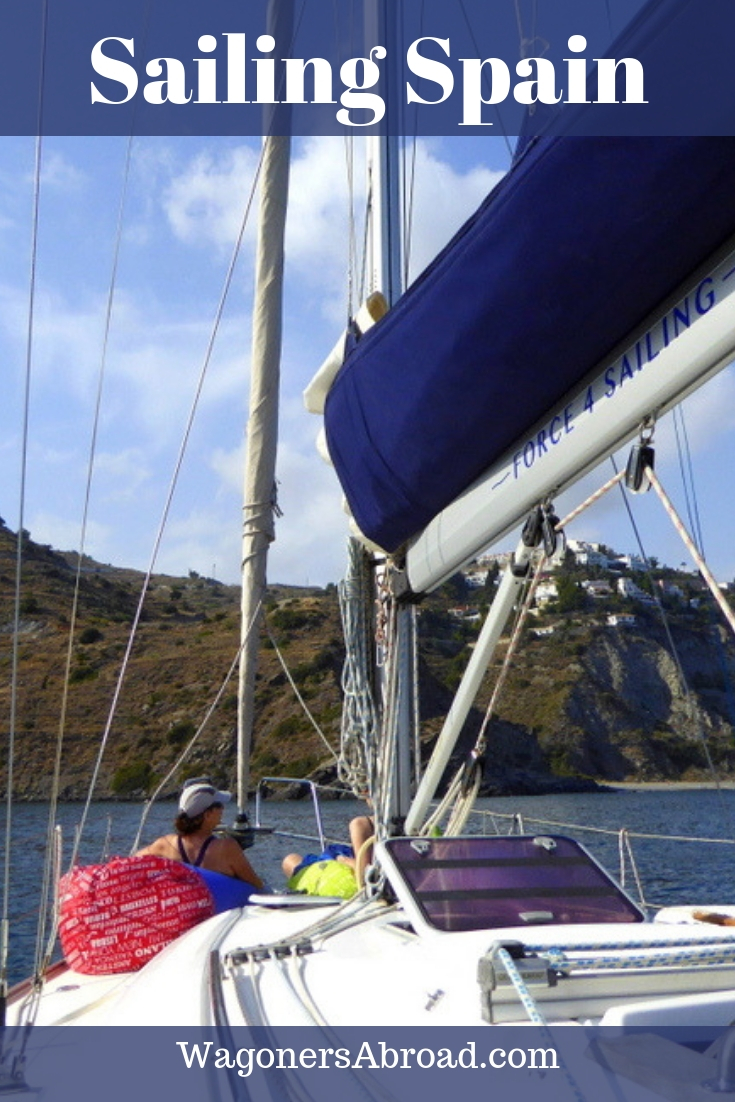 A different view of the Costa Tropical

Our small town is located next to the very luxurious Marina del Este, and there are normally some very nice boats there.  I’m not a huge boat guy, but I do love a lake, an ocean, or a sea, and it just so happens that the Mediterranean is a beautiful body of water.  When Heidi told me we were going on a sailing tour, I got pretty excited.  The first thing that occurred to me was, “Who are we going to bring?”.  Lars had plans, and generally, Anya is the age where she would probably be someplace other than where Heidi and I are.  Fair enough…I remember being that age.

The first people that popped in our heads to bring along were Bruce and Maria.  They’re a retired couple, and they have been officially adopted by the Wagoners as family.  We had room for 6 people, and it turned out that Anya was interested in going…if she could bring a friend.  It turns out that Anya’s friend was not able to join us, so I thought for sure Anya would bail on the activity, but lo and behold, she opted to spend 4 hours sailing with us “old people” (her words).

The plan was pretty simple.  Show up at the dock at the predetermined time, and everything else would be handled.  I like simple.  We brought some towels, sunscreen, and some dry clothes.  Food and drinks would be provided, so other than our fellow sailors, it was time to head to the marina. 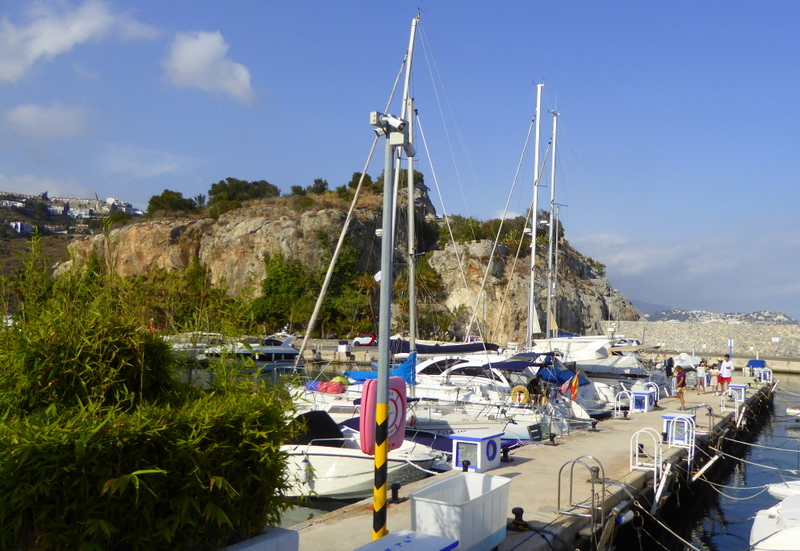 Marina del Este is in La Herradura, but it’s only about a 10-minute drive from our house up and down some windy roads.  With the car parked, we made our way to dock, the boat and crew were there to greet us.  They run a charter boat business and they have a very inviting boat.  They offer 3, 4, and 5-hour charters, and they’re very customer-focused.

Once we were aboard, we were given a short safety briefing (location of the lifejackets, fire extinguishers, and the location of the bathroom, sorry, head).  When the “official” stuff out of the way, we made our way out of the harbor. 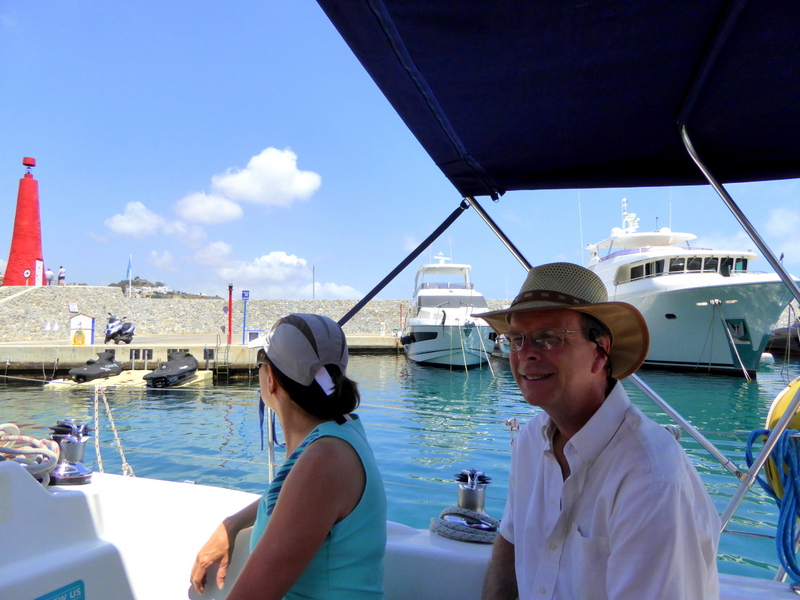 What To Do and Where To Go in Costa Tropical

One of the things I liked about our charter was that we were in charge of where we went.  I think all of us were in a go-with-the-flow kind of mood, so we told them to show us the area.

With the boat out in the open water, it was time for…drinks!  So out came the cava, beer, and soft drinks.  Strangely enough, Anya asked if she could have a beer.  Given that she pretty much only drinks water, I was surprised at her bold request.  And it was a resounding, “No!”.  Gotta love the effort though!

I almost forgot.  Not only was there the boating, but they trail a kayak and a standup paddleboard behind.  So there are activities beyond just sailing (and drinking!) once we anchored somewhere.

There’s A Lot To See

There wasn’t an abundance of wind, so we motored most of the way, and that worked out well.  A few members of our party are prone to sea-sickness, so the less bouncy the better.  As we motored around, they showed us several points of the accessible only by boat.  Quite a few of these places are popular with the divers and kayakers.  Namely the caves.

I’ve frequently heard people mention the caves as an interesting attraction, and I can understand why.  There’s one cave with a statue the Virgin Mary nestled in one of the bigger caves, and there’s even a statue of her underwater.  Some of these caves where huge.  Big enough for several kayaks to fit in.  I might want to get a closer view in the future, so consider this a scoping trip. 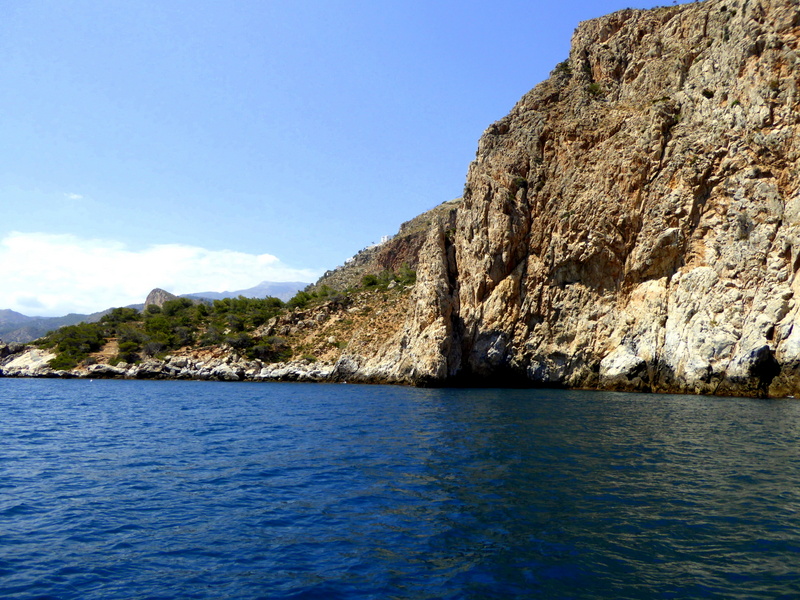 We went past La Herradura around to the area where Cerro Gordo National Park begins, and the vistas from the boat were stunning.  Once we came close to Playa Naturista de Cantarriján (nudist beach), we had an interesting conversation about the new clothing-optional restaurant that recently opened.  Not exactly my cup of tea.

At this point, we were about halfway into our 4-hour charter, and with our stomachs grumbling a bit, it was time to find a sheltered place to anchor.  Once anchored, it was time for some sailing tapas, and even more cava (which was excellent by the way).  The food was good and took the edge off those hunger pains. 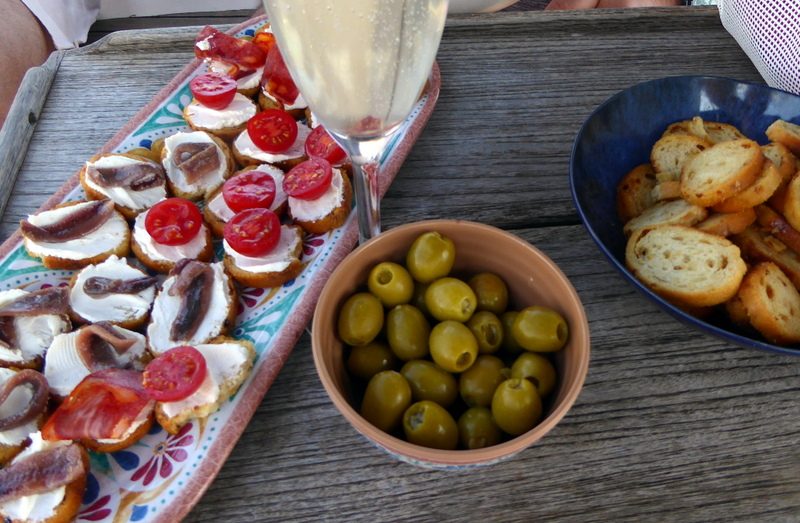 Being fed, we could take our pick of the standup board, the kayak, and even snorkeling.  Anya was the first to jump in the water, and based on the high-pitched scream and yelling she did, I assumed the water was a tad cold.  She practically jumped out of the water and stood on the back of the boat getting warm.  After warming up, she hopped on the standup board and was checking out the area.  She didn’t fall in…not once!

Maria wanted to get her feet wet, and she let out a bit of a yelp when her footies got wet.  Heidi was bolder and just jumped in.  When she surfaced, she didn’t immediately yell out, but her mouth was wide open like she wanted to scream, but was too cold to do so.  After about 5 seconds, she let out a yell as well.

Now being the big strapping manly man that I am, I decided that I didn’t want to go in.  The water is cold after all!  I’m not stupid.  After about 5 minutes, I knew I had to go in, or else I would never live it down.  So reluctantly, I jumped in.  Not once, but twice, and yes, it was freaking cold!

Our four hours flew by, and it was time to head back to the Marina.  With all of us back on the boat, and the water toys securely tied-up, we raised anchor and headed home.  Along the way, we looked at the amazing houses with the million-dollar views.  We discussed the locals who own some of the properties, and there are even a few celebrities (like Bruce Willis and George Clooney) who are rumored to have Mediterranean residences in the area.

When Heidi first told me about the charter, I thought 4 hours would be too long, but it was just right.  Nobody got sick, we all enjoyed our little piece of the Med, and we consumed great food and drink.

I have to say, I fell in love again with the Costa Tropical.  It’s so interesting to see the beaches and neighborhoods from the water.  It gave me a new view (and appreciation) for both Almuñécar and La Herradura.  This is an activity that I would like to do again, and I can highly recommend booking a sailing tour. 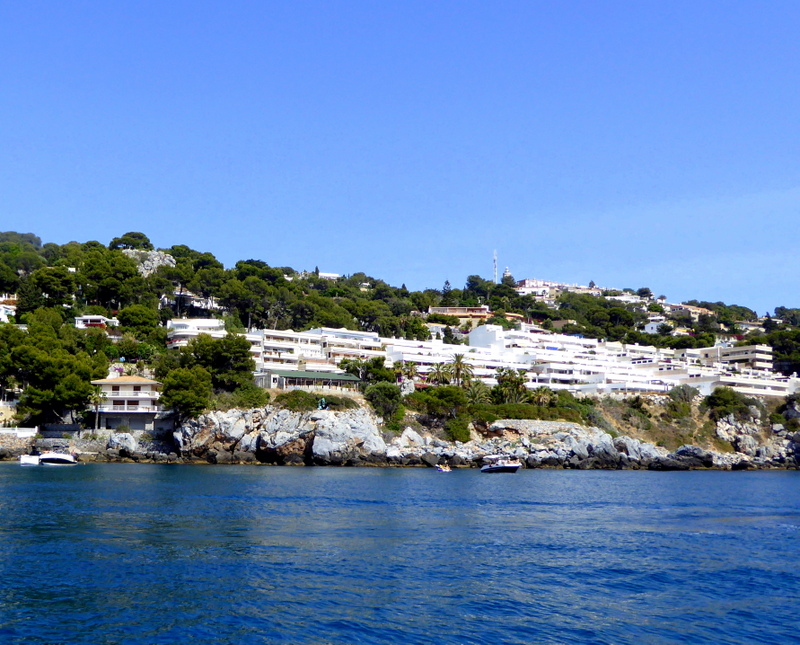 If you find yourself in the area, do yourself a favor and get an additional perspective our little slice of paradise and enjoy a sailing charter on Costa Tropical.