As the biggest Non-Foodie in the household, it’s probably a bit odd that I’m doing a food post.  (Actually, Heidi is really twisting my arm…just kidding honey.)  In general, when it comes to new foods I pretty much avoid them, but I made an exception for today’s post:  Fruits.  Specifically, Spanish fruits grown locally right here in Almuñecar. 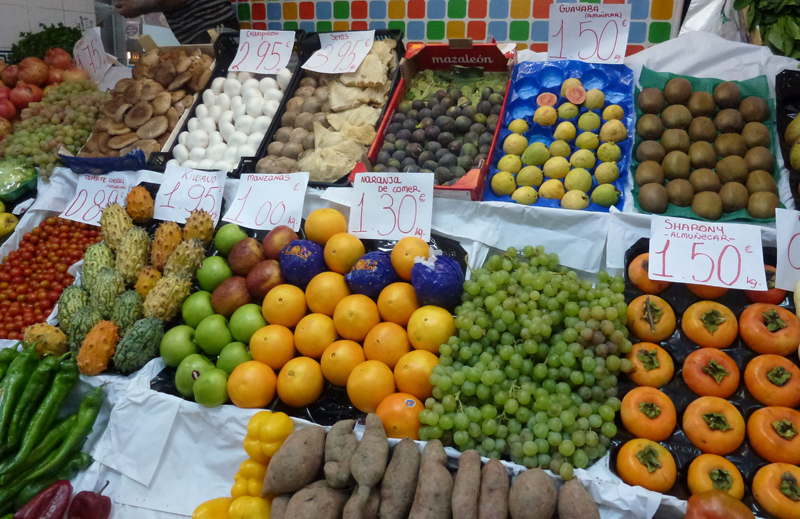 This post is actually a long time in the making.  We have seen and tasted some of the local Spanish fruit, but it was time that we did it properly with formal taste testing with the entire family involved.  (If I have to suffer, then so do the kids…all in the name of embracing culture right?)

Since we were doing this right, Heidi sourced all of the fruit at our local municipal market (think Farmers’ Market) called Almuñécar Mercado Municipal.  The selection there is first rate, and the prices are better than the local grocery store as well.

Here’s what we’re going to be tasting… 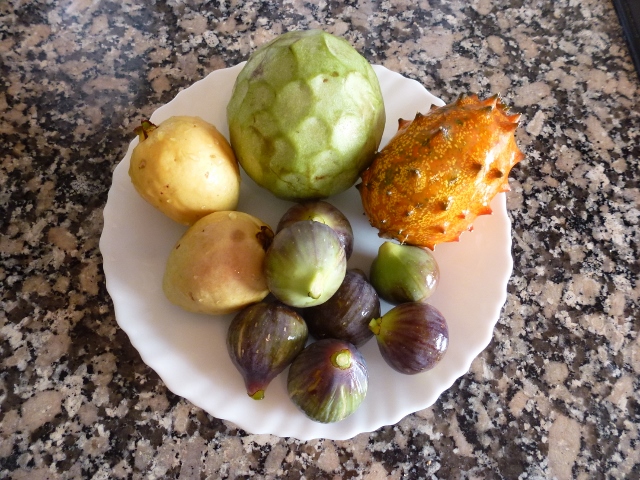 If you think they’re pretty interesting on the outside, check this out… 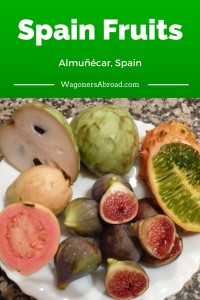 So what are the Spanish fruits we’re tasting?  Starting at the top we have the venerable Cherimoya ([Chirimoya] – aka Custard Apple), Horned Melon [Kiwano], Fig [Higo], and Guava [Guayaba].  So let’s get started shall we?

First off is the Chirimoya.  We first heard about these when we moved here.  They kind of look like an artichoke, and the locals here love them.   In the center of town is a pretty good sized orchard of these trees.  We have a few trees close to our place as well and one of the maintenance guys swore up and down that this was the best fruit EVER.   Supposedly, Mark Twain called the chirimoya “the most delicious fruit known to men.”  And the result?  It was very sweet, but the consistency was a bit odd.  Similar to a pear, but not.  It was very creamy and kind of, well…odd.  I’m sorry Mark, but if you’re somehow reading this blog, you’re wrong.

Next up is the Horned Melon.  Now this thing looks pretty cool.  Great yellow and bright orange skin, and those horns.  Be careful with the horns!  They are very sharp.  I have no idea how you tell if this beast is ripe or not, because squeezing it will result in some serious pain.  Heidi cut it up, and inside it’s a beautiful color.  The texture is a bit different, but reminded me of the seeded center in a cucumber.  The seeds are packed around a slimy cover.  It was very bitter and had the tartness of a lime.  A vendor told Heidi that these are great with some brown sugar.  Really?!  Brown sugar would make a teaspoon of sand taste good, but what do I know?

On deck is the  (whoops–already used that word) Fig.  I’ll be honest, other than the occasional sleeve of Newtons, I’d never eaten a raw fig, and didn’t know what to expect.  I was a bit surprised and disappointed when Heidi cut one up.  First, it looks nothing like a Fig Newton, and is very non-descript on the outside.  On the inside, it looks kinda creepy, and otherworldly.  Like most fruit, if the skin gives a bit when you squeeze it, it’s ripe.  What’s the verdict?  Of all the fruit, this was probably the most palatable.  It was very seedy, but sweet, but the inside looks like a bleeding alien bug, so it kinda wigged me out.  Lars absolutely loves them and this was the main purpose of the trip to the daily market in the first place.  Lars tried them a couple of weeks ago in Frigiliana and we have video of his reaction at the bottom of this post.

Last but not least is the Guava.  One of the things I noticed about the guava was that it was very fragrant before Heidi cut it open.  It has a sweet aroma that smells like, well guava.  (Somebody needs to invent the internet equivalent of Smell-o-Vision!).  It’s got a syrupy sweet flavor, but ultimately the consistency was a bit too slimy for us.  Guava juice is good.  Dehydrated guava is great.  The fresh guava just didn’t do it for us though.

And the winner is?  The general consensus is that the Fig is the winner.  That said, if we had included a Pomegranate (Granada) in this test, it would have kicked butt!  Heidi budgets quite a bit more for groceries in the Fall, just to accommodate the daily purchase of pomegranates.