During our summer break/vacation, we spent a week just outside of Granada, and on one of the days we ventured into town, we decided to do our first Segway Tour in Granada with Ensegway.  What was it like?  Was it fun?  What did you see?  I will answer all of those questions, but you’ll just have to keep reading. 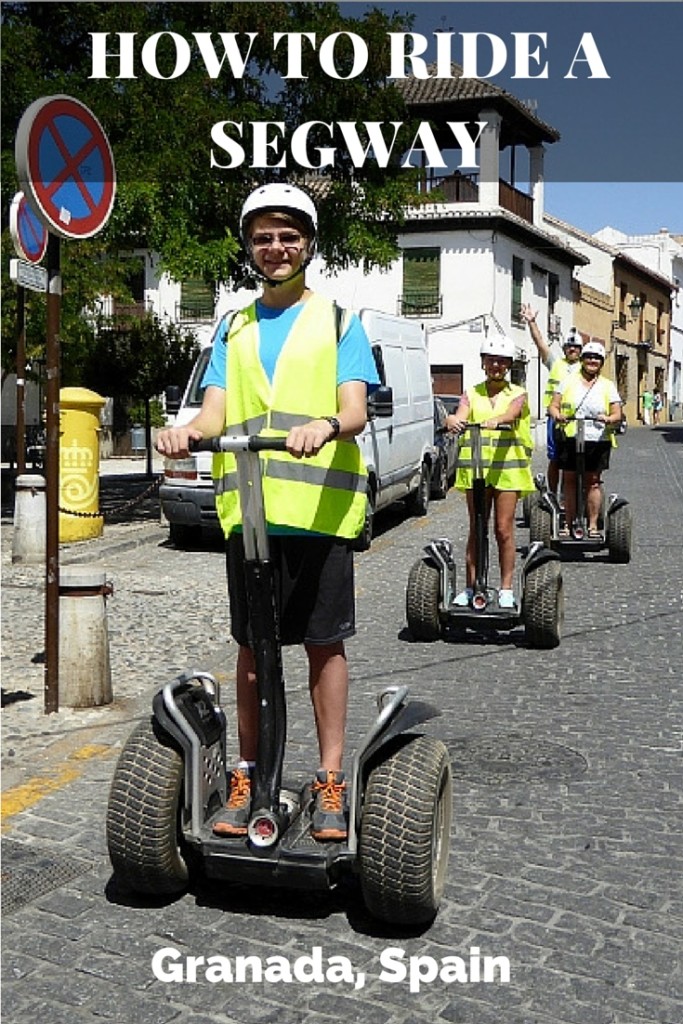 Sidenote about the Segway:  Even before the Segway was officially released, I avidly followed any developments about Project Ginger, or “IT” as it was referred to in the late 90s.  I have always wanted to ride on one, and over the last several years of us traveling around the globe, we’ve spotted tour companies using the Segway, and it’s always been an item on the Bucket List for us to do a family tour.  Call it an early birthday present, or a very late Christmas present, Heidi was pretty clever in scheduling the surprise.  Everyone else knew about it before me.  I guess what they say that, “Dad is always the last to know” is true.

We were not staying in Granada, so we made sure we had plenty of time to find parking and get to Ensegway for our morning appointment.  I’ll be honest, we’ve been to Granada a number of times, and while it’s a very popular tourist destination, the city has just not really resonated with us.  This go around though, my opinion has changed, and we’ll have to schedule some additional trips in the future.

So on to the tour.  We arrived early, and our guide Juan arrived, and was very friendly.  He gave us a few options on where we could go.  We chose the Albaicín tour.  We’ve walked the area before, but we were open to seeing new stuff, and Juan assured us the views were fantastic. 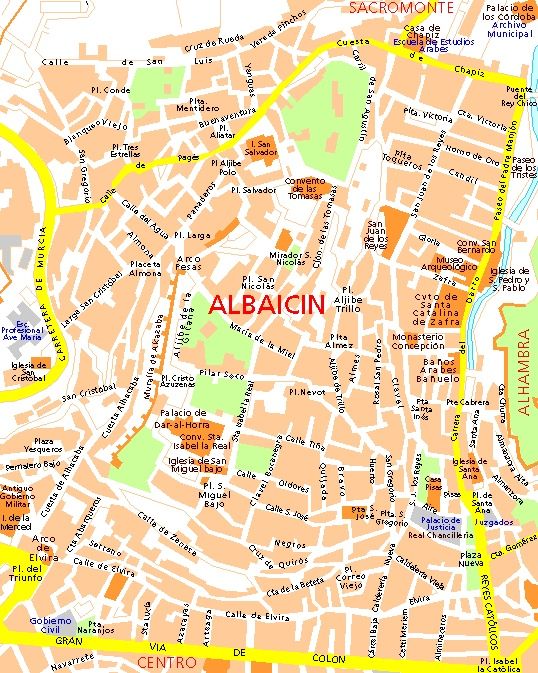 How To Ride A Segway Granada

Having never been on one, I had no idea how to ride a segway or how difficult it would be.  The technology is pretty amazing.  The thing looks like it should just fall over, but there’s plenty of magic that keeps the Segway upright and stable.  Juan gave the kids the first instruction, and Anya just sort of hopped on, and looked like an expert in about 2 minutes.  Same with Lars.  And same with Heidi.  Once it was my turn, I was nervous.  How could I live with myself if I crashed, or didn’t get the hang of it right away?  I’m sure I could do it, but I now have a teenage son who would never let me live it down.

How’d I do?  Fantastic of course!  As if there was any doubt.  Juan is a great teacher.  I was so good, that he put me at the head of the group**.  Kind of like an Assistant Tour Guide.  It turns out that the Segway very easy to operate.  The key is to relax, and just go with the flow.  The key is to control your speed with your hips.  Hips forward, go faster.  Hips backward, slow down or stop.  Only a very subtle change in the body’s center of gravity is needed.  The key is don’t fight the machine.  I know, I know, that’s a lot of keys, but it is really simple.
** My immense skill may not exactly be the real reason why I was up front.

Making Turns On A Segway Tour

There are handlebars to rest your hands and they act as an aid to stabilize you, but they don’t turn like the handlebars on a bicycle.  Instead, the post on which the handlebars are mounted moves parallel with your body.  Think of facing a metronome, and the arm that moves back and forth is similar to the movement of the handlebars.  The Segway is extremely maneuverable.  You can rotate about the center axis, go backward, and they can go fast.  I found the Turbo button on mine, and I’ll cover that in a bit.

Once we had our protective gear (helmets and bright jerseys) donned, and our training completed, we were on our way into the Albaicín.  Our first stop was a building which used to house a Hammam, or Arabic bath in Granada.  Pretty cool.  For those who don’t know, Granada has a long history that predates the Visigoths (not the heavy metal band!).  Muslim forces conquered Granada (and most of Andalusia) in the early 700s.  With the fall of Córdoba (1236) and Seville (1248), Muslims were seeking refuge in Granada.  In 1491, the Christians came in and defeated the last emirate in Andalusia. 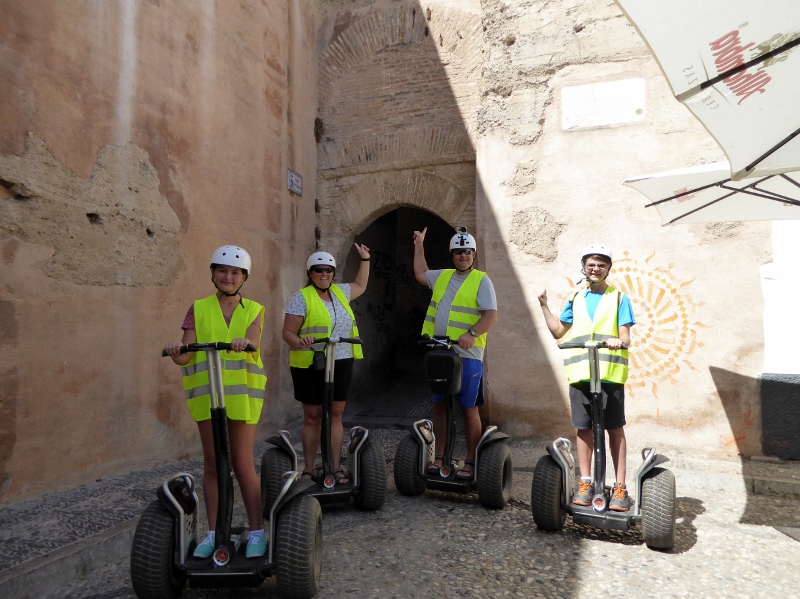 A lot of the original muslim architecture was either destroyed, or covered over, but there are exceptions.  Typically the mosques were saved as they were structurally sound, but they were turned into Catholic churches.  Along our journey, we saw one church that has a typical Christian architected doorway, and along the same wall, there is an Arabic-inspired door.  Juan explained that this is one of the few churches left that has both types of doors. 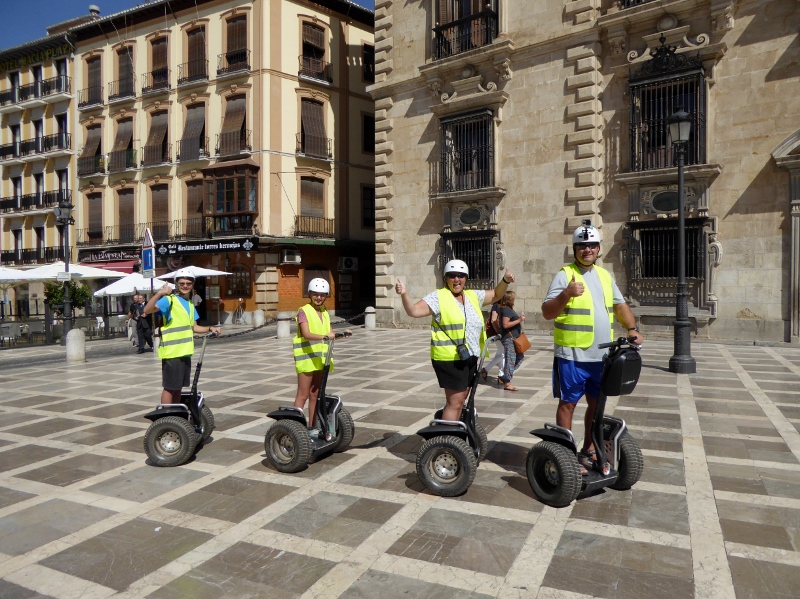 Time For The Segway Tour Of the Albaicin!

Now I mentioned earlier that we had walked around the Albaicín before, but there were some great benefits to touring with the Segway:

Juan was kind enough to stop frequently, and explain the buildings, architecture, or history during our tour.  Here we are with the Alhambra right behind us. 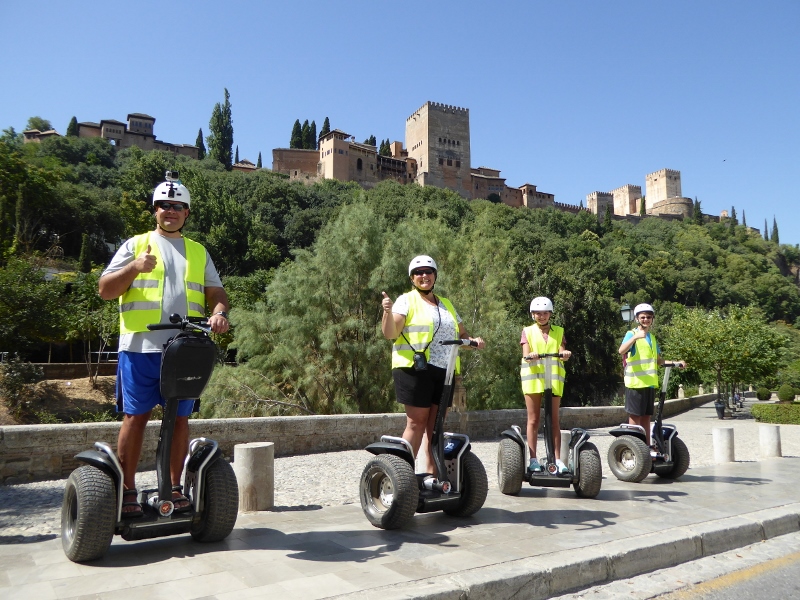 Pretty nice, huh!  Juan led us up the hill, and stopped midway and took a breather to grab some water from one of the many city fountains.  Talk about refreshing.  Once we were back on our machines, we continued up to the top of the hill for a truly beautiful view.  We were near the Church of San Cristobal and then on up to San Nicolas Square.  From this vantage, we could see the Alhambra and a great view of Granada below.

After some more fantastic views of Granada, we started to make our way down, and we were winding back and forth through the pedestrian-only streets.  Of course people stopped and stared (I could see the envy in their eyes), and I felt like royalty.

Juan provided us with a superb tour of the Albaicín.  He took us to places that most tourists don’t see, and provided us with a ton of local history.  The kids were fascinated with him and his story telling.  You see he has a degree in history and his passion shows when he is sharing the history of Granada with us.  I mean come on, who wouldn’t want to know about the Queen taking over the Granada area and then granting Christopher Columbus money to go explore.

The Segways were very easy to ride, and made for an efficient way to get around.  If you find yourself in Granada (or one of the many other cities they service), and you want to take a non-standard tour, give the Ensegway people a call. 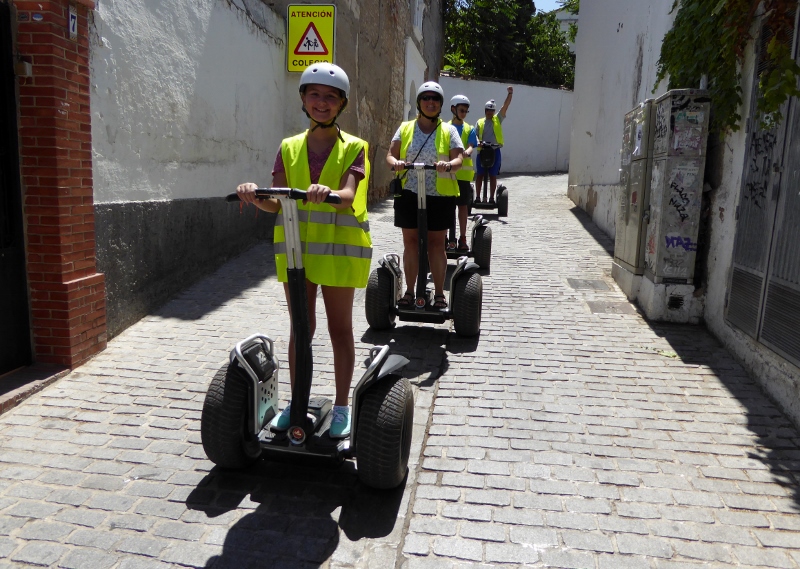 While you are there, why not Book Your Food Tour!

Also view our segway tours in other cities!

There are also many organized tours for you to enjoy from being active on walking or biking tour, to enjoying a food or wine tour.  There is so much to do and Viator has so many great offers for you.  Click here to see their latest Granada Deals!

Where to Stay in Costa del Sol

Disclosure:  We partnered with EnSegway Granada on this service in exchange for our honest review.

8 thoughts on “How To Ride A Segway Granada Spain”