There are a few things that we miss from the U.S.  The most common thing is food, but for me specifically, I miss having a motorcycle on which to rip around.  We’re currently in Siem Reap Cambodia, so when I saw a sign that read Goshen Motorcycle Adventures, I knew the Motorcycling Gods were looking favorably on me. 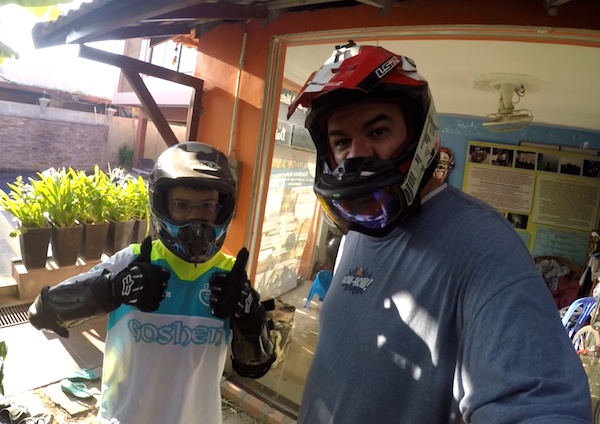 When we checked into our lodge, I noticed a couple of big motorcycles (not mopeds).  Real, honest, motorcycles that have big engines and fat knobby tires.  It was late in the day, and I just happened to see a father and daughter coming back from a tour, and they had that unmistakable sign that every dirt biker will recognize:  A large, dirty smile.  They were very dirty, and happy, so I asked them about it, and they basically gave me the thumbs-up sign.

I talked with the owner (Seyha), and told him that I was interested in doing a tour with Lars.  He then asked me a hugely important question:  “What do you want to do?”  Wow!  I was not expecting that.  Seyha listened to me as I told him that it had been a few years since Lars or I had been on a motorcycle, and we weren’t looking for anything too extreme.  He asked me when we would like to do the tour, and I gave him a few options.  He offered to get a small bike for Lars, and it was going to take a couple of days.  No problem with that.

Over the next few days, he and I exchanged emails about the content and length of the tour.  I reiterated about our desire to get off the beaten path, and just explore the countryside.  He had some good places in mind, and he assured me that we would like it.

On the morning of the tour, Lars and I were both a bit nervous.  I knew Lars was worried about getting on a bike, and I was nervous for him.  I had some pants and boots, and a shirt since I know it’s next to impossible to find clothing sizes for me here in Southeast Asia.  We went down to find Seyha with his big smile, and he started working on getting Lars’ equipment put on.  Pants, shirts, socks, big boots, gloves, knee/elbow protection, and the helmet.  Whew!

Seyha made sure that everything fit well, and we went to check out the bikes.  The two big bikes were for Seyha and I, and true to his word, Seyha had a small (100cc) bike for Lars.  This was perfect!  Then it dawned on me.  Lars has never used a clutch!  His old bike was an automatic, so he had never used a clutch.  Damn!  How could I be so stupid?!  (Don’t answer that!)

The three of us were going to ride through the streets to get to the trails, and this changed things.  There’s no way I wanted Lars dealing with traffic, while trying to learn a clutch.  It was just too much to ask.  Seyha had an assistant ride Lars’ bike to our destination, and Lars would ride on the back of my bike.  It was a bit cramped, but it got us out of the city, and into the open spaces. 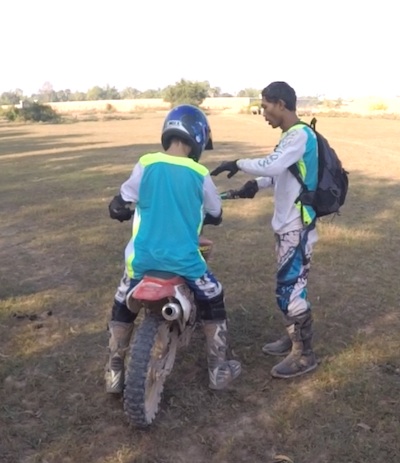 Our open space turned out to be a big field.  We stopped, and Seyha explained that it would be a good idea to let Lars get the hang of the bike just riding around the open lot.  It wasn’t completely deserted.  It did have a couple of “residents”: 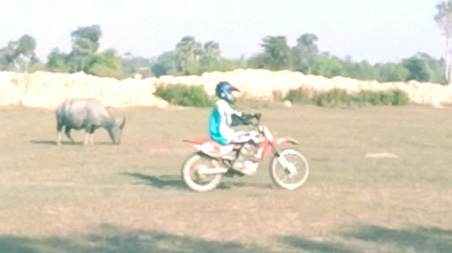 Yes…that is a water buffalo!  Pretty crazy, huh?  How many kids can say they’ve ridden a dirt bike around a water buffalo?  I’m guessing it’s a small number.  They were just roaming around the field eating, and not even noticing Lars.  Once Lars found his groove, we decided to head out and do some real riding.

There were a couple of spills, but nothing too major.  We saw some fantastic scenery before we broke for lunch.  We stopped at West Baray which is a man-made lake that was constructed during the 11th century.  There were a number of places to eat, so we parked our bikes, and Seyha explained the different foods that were cooking on the BBQ.  My man Lars stepped up to the plate, and ordered two quail and some rice, and we bought a half-kilo of lychees. 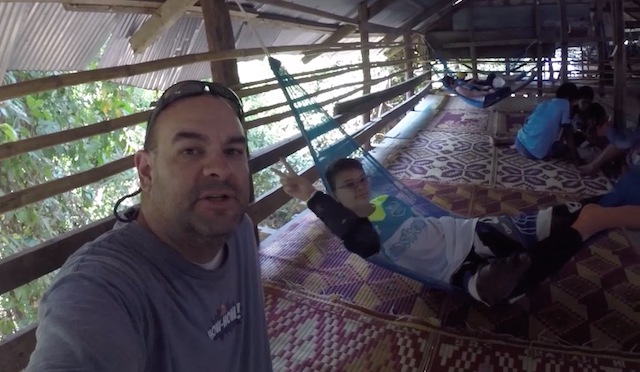 Maybe it was all of the riding, and being tired (in a good way), but those were some of the best lychees we’ve had…ever.  After some hesitation about how to eat the quail, Lars dug in, and started eating.  Lars noticed an egg-shaped object that was part of the quail, and Seyha explained that it was in fact a quail egg.  I guess they cook it with the rest of the bird.  While Lars was chowing down on his quail, I was able to have a good chat with Seyha.  He’s a very down-to-earth, and likeable guy.

We finished our drinks, donned our gear, and made our way around the lake.  There was another spill (Lars ran into a tree), but it wasn’t major.  Having watched Lars all day during our ride, and reviewing the videos, I have to say Lars did a fantastic job.  He kept his cool when he was having problems, and was big enough to let us know when he wasn’t comfortable riding on a particular part of the trail.  When he did get into trouble, he did a good job of compensating.  I was more than pleased!

Once we were around the lake, we made another stop to get another drink, and relaxed.  I could tell both Lars and I were getting tired, so I suggested that we head home.  Seyha did his internal GPS calculations, and managed to find a relatively quick way to get home.  It did entail us going through some Siem Reap traffic, but Seyha was right there to help Lars.

At the end of our 6-hour ride, we were very tired, very dusty, but we had those large dirty smiles I mentioned earlier.  Man, what a day!  That was some great riding.  A huge thanks goes out to Seyha for organizing the adventure.  He not only listened to our needs (as far as equipment), and provided us a custom tour that is difficult to find in the touristy spots like Siem Reap.

Another thing I noticed during our ride was that while he was leading the group, he was checking behind him to make sure Lars and I were OK.  He’s a very safe rider, and I would have no problem riding with him again.

We saw some cool terrain, tried some new food, and exercised our “motorcycle muscles”.  I had the GoPro running and we got some good footage.  Enjoy!

Disclosure:  Goshen Adventures was kind enough to sponsor Lars’ part of the tour.  All opinions are our own.