Being so far removed from the U.S., it’s easy for us to lose track of holidays that are celebrated there.  Now obviously on the 4th of July we always celebrate our Day of Independence, but this year was special.  Why?

It was special because I was in a Spanish town that celebrates the U.S. Independence.  Yes, you read that right.  And the special town that does this?  It’s called Macharaviaya, and it’s a great place to celebrate the 4th of July. I know that’s a mouthful, but it’s pretty straightforward when you break it down.  It’s pronounced:  Mah-chah-rah-vee-yah-yaa.  Simple right?!

Now the reason they celebrate the 4th of July is due to one of the town’s most beloved sons from one of its most prominent families.  The person I’m referring to is Bernardo Vincente de Gálvez.  It turns out that Señor Gálvez played an instrumental part during our war with the British fighting for our independence.

A Brief (I promise!) History Lesson

Gálvez’s many military exploits are far too numerous to cover in this post, but check out his Wikipedia page.  The guy was an accomplished strategist and leader.  Specifically, the celebration in Macharaviaya celebrates his military victory over the British forces who were stationed Pensacola Florida.  This victory took place on May 8, 1781.  (In case you don’t know/remember the history of that timeframe, the Revolutionary War was almost over, with the final major Battle of Yorktown occurring some months later on October 10, 1781.)

To refresh your memory (I had to look this up — getting old…), in 1763, Florida was traded by Spain to Great Britain for the control of Havana Cuba which had been captured by the British during the Seven Years’ War.  The Spanish and British were fighting for dominance of the New World, so in December of 1776, King Charles III of Spain decided that providing covert assistance would be of strategic importance.

So when Gálvez was made Governor of Luisiana (formerly known as the territory of West Florida), he played a huge role in helping the Americans in their struggle against the British.  Gálvez’s accomplishments were so important that they even named a town after him.  That town is Galveston Texas.  Cool, right?!

Back To The Present in Macharaviaya Spain

A friend of mine, Mark, had told me about this celebration some months prior, so I was excited to see it.  Bruce and I drove the roughly hour-long trip to the town, found a parking spot, and walked around.  The town itself is very small, so it’s practically impossible to get lost.  We had arrived very early, so we walked around a bit.  I should point out that the official poster indicates that the festivities started at 8:30 PM, and we arrived a good hour and a half before that.

Just below the church, there was an area where various food vendors were setting up.  They had all sorts of local fare.  There were many cured meats like salchicha and chorizo, and a bunch of cheeses.  I left the food tasting to Bruce, who was doing a lot of tasting.  They also had vendors selling olive oil (no surprise there!) and even one stand selling a homemade alcoholic drink.  (I’m wishing I would have tried that, but I was driving.)

Walking up to the church level, they had the place already setup for the reenactment.  A bunch of stadium seats were set up with a few rows of seats reserved for local officials.  All of the regular seats were available, but I didn’t want to sit on my behind for an hour before the entertainment began, so Bruce and I checked out a restaurant that had a large outdoor seating area.  We were told that the entire seating area was reserved, but we could eat upstairs.  OK…no problem.  The upstairs was decorated very nicely, and it was just Bruce and I up there.

I wasn’t famished, but I did want to get something to eat, so we wound up ordering a couple of Gambas Pil-Pil (shrimp in a spicy garlic-infused oil).  That’s my Go-To dish in Spain.  Oh, and there might have been a couple of cañas ordered as well.  We were just finishing when Mark comes walking up the stairs.  I figured that I might run into him, but was surprised that it happened so quickly.

Mark (who is a Brit) used to live in the area, and knows the history of the town and Gálvez quite well.  We had a good time talking about the upcoming reenactments, sports, politics, and the time passed quickly.  By the time we came out of the restaurant, all of the seating had been taken so we had to find a place to stand. 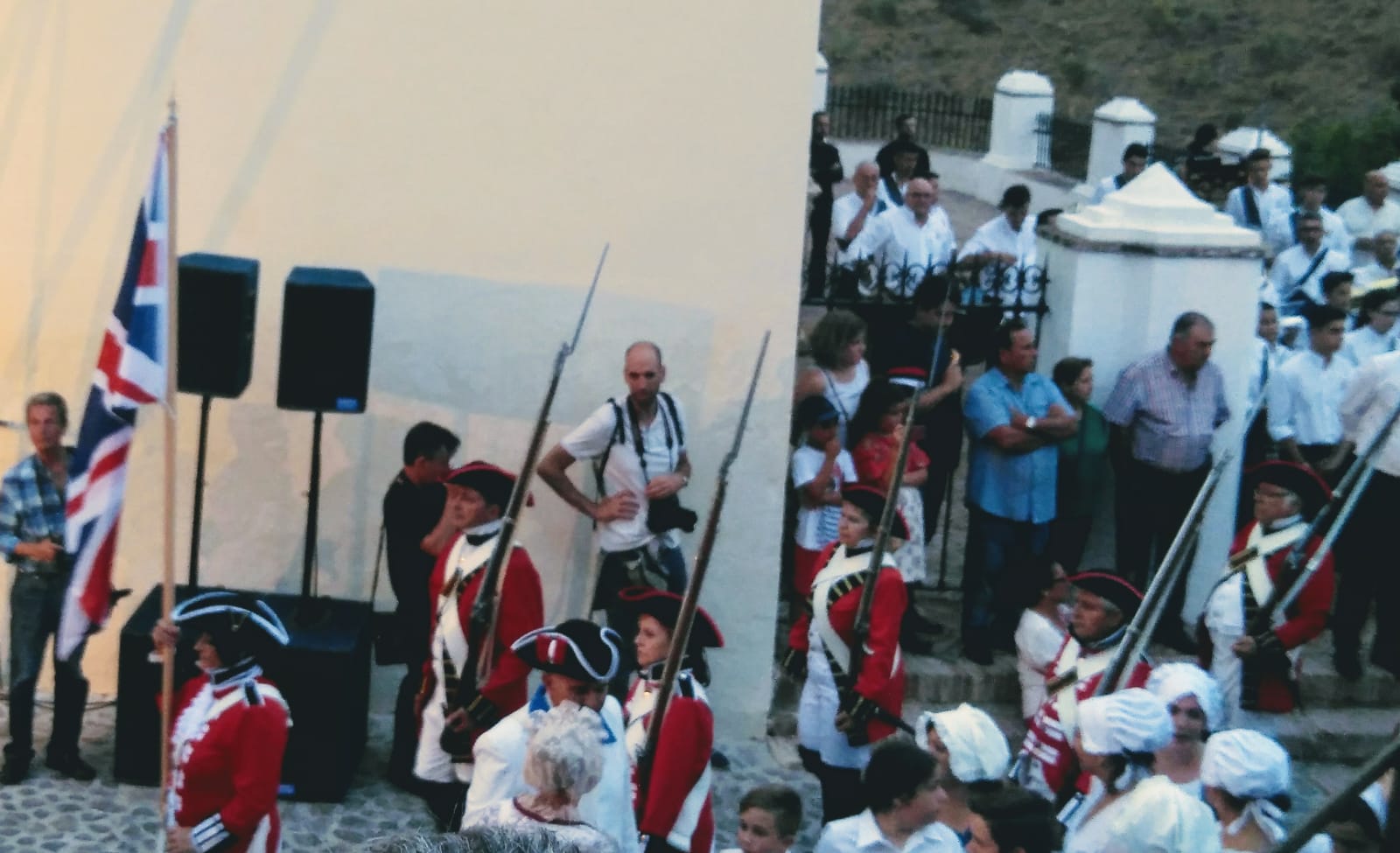 And It Starts 4th of July celebrations

I’ve lived in Spain for several years, and rarely do things start on time here.  Well this was no different.  It wasn’t until a bit after 9 PM before things got underway.  While we waited, the rain started and stopped a few times, and I figured we would get rained-out, but we lucked out.

What do I hear in the distance?  Drums…That can only mean one thing.  It’s started!  Up the narrow path a procession of people is coming.  They are lead by what looks like the student band.  They are followed by those participating in the reenactments.  There are the U.S., British, and Spanish soldiers, all dressed up in period garb. 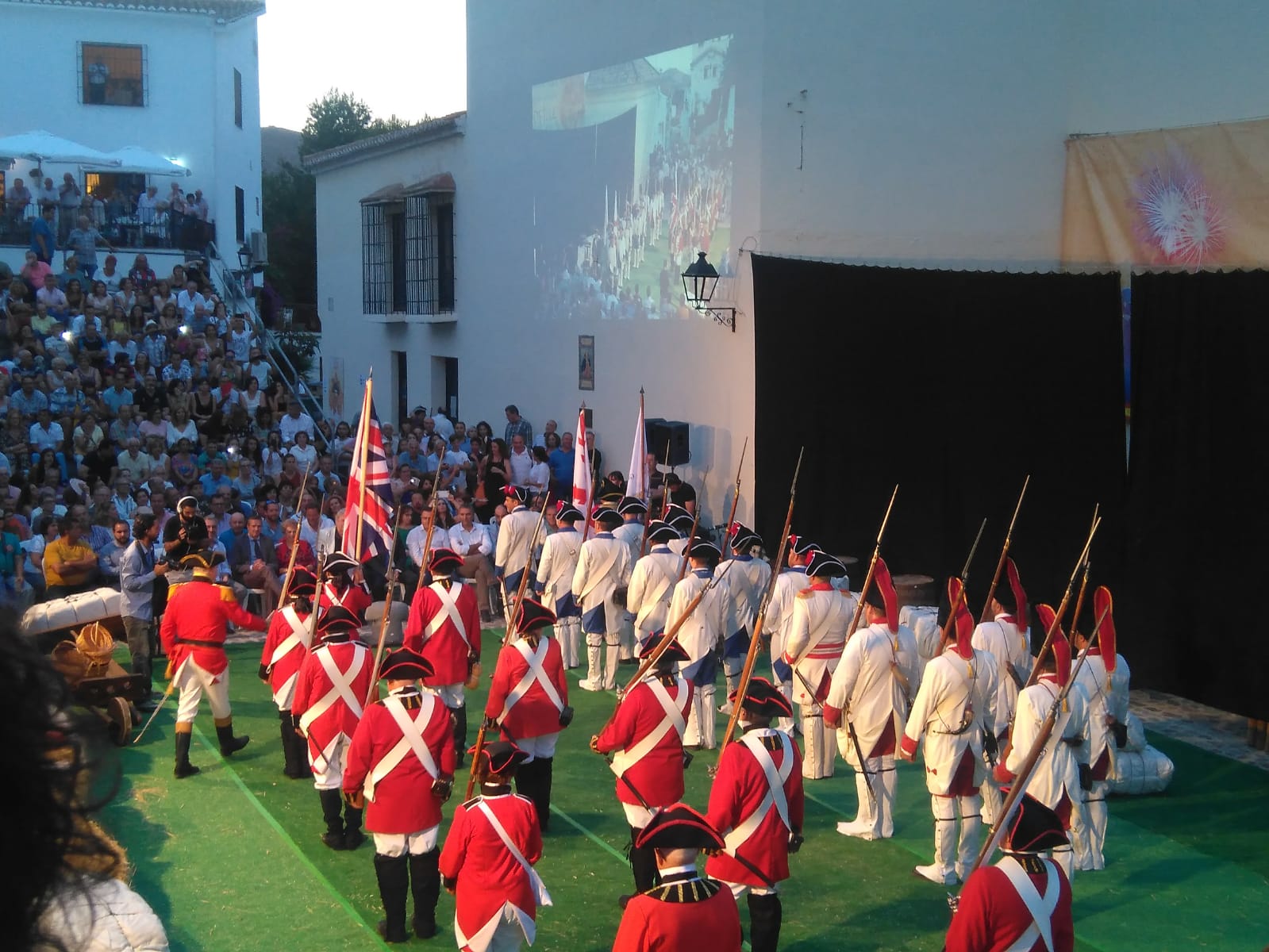 They lined up in 4 ranks, and the soldiers were at attention.  The event was kicked off by a hostess who talked about the celebration, Gálvez, and other things.  Then the flag raising started, and of course the Spanish flag was raised first while the student band played the Spanish anthem, La Marcha Real.  Everyone clapped after the anthem was played, and then the American flag was raised while The Star Spangled Banner was played.  I’ve got to admit that I got goosebumps on that one.  It was pretty surreal watching my nation’s flag being raised with the anthem being played in a small town in Spain. 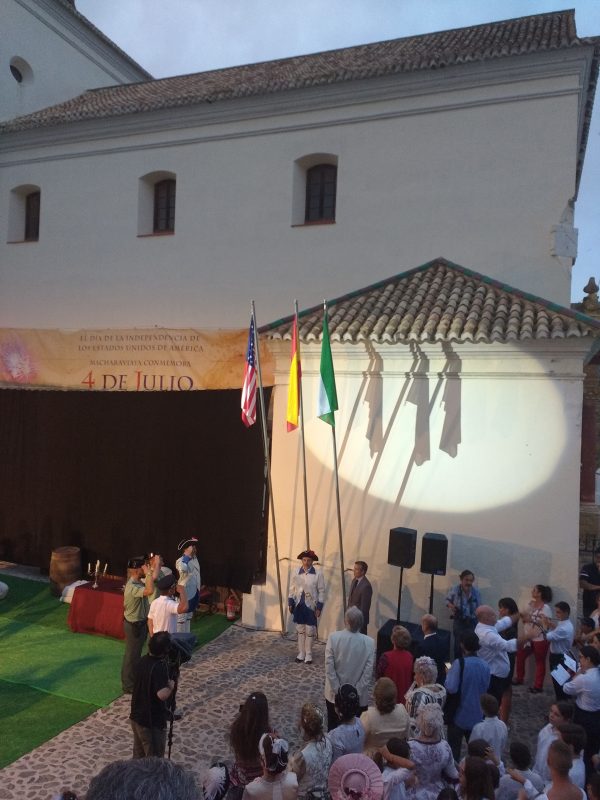 The last flag to be raised was the flag of Andalucía, and the anthem La Bandera Blanca y Verde (The White and Green Flag) was played.  With all of the flags raised there was great ceremony and acknowledgement of the local dignitaries and guests.  There was even a prerecorded video of the current mayor of Galveston Texas sending his regards and well-wishes to the celebrations in Macharaviaya.

The 4th of July festivities Reenactment 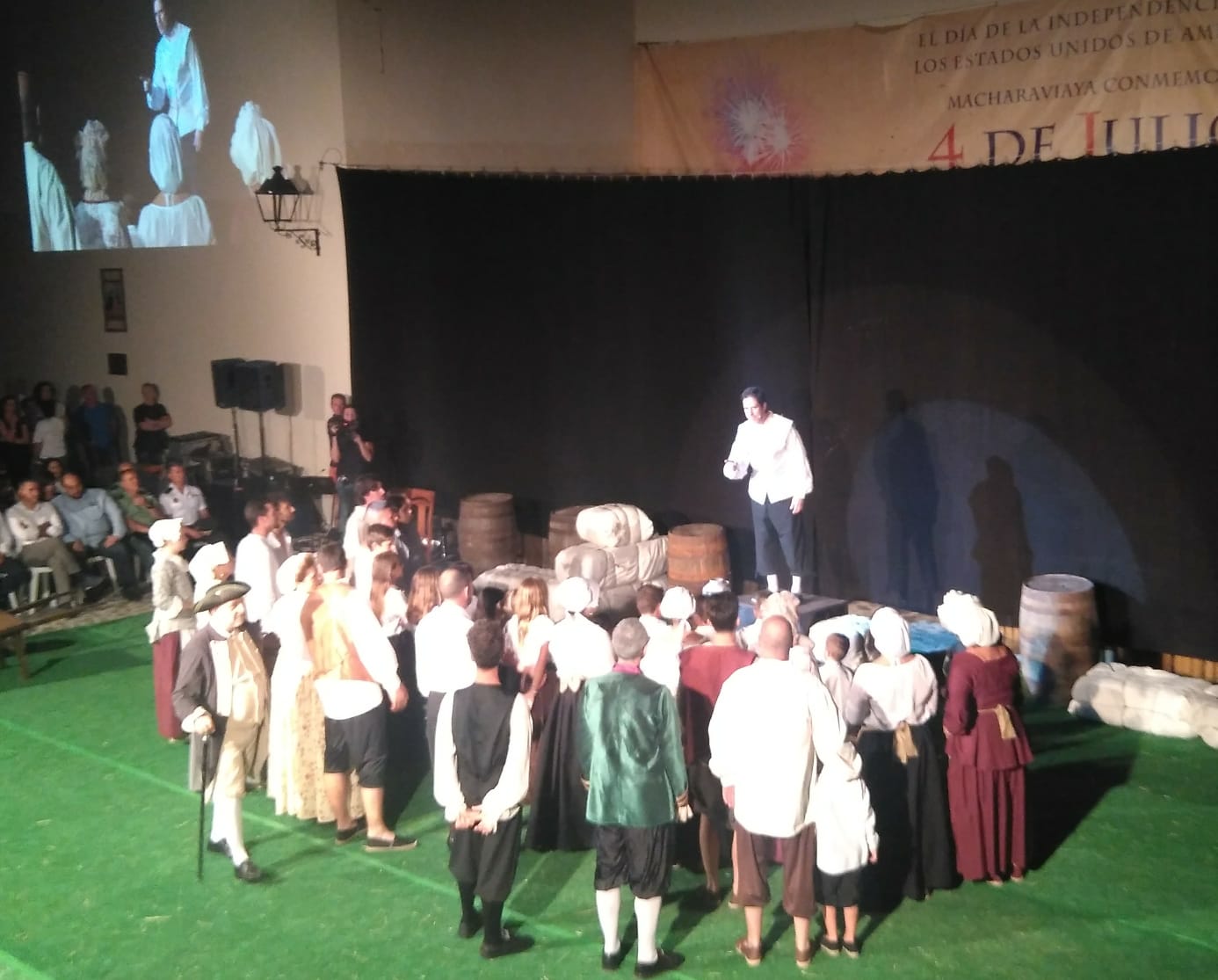 After all of the ceremony, the actual reenactment began.  It started with Gálvez as a child, and there was a lot of preamble to the actual battle reenactment, but that’s OK.  They’re obviously very proud of Gálvez and his beginnings. 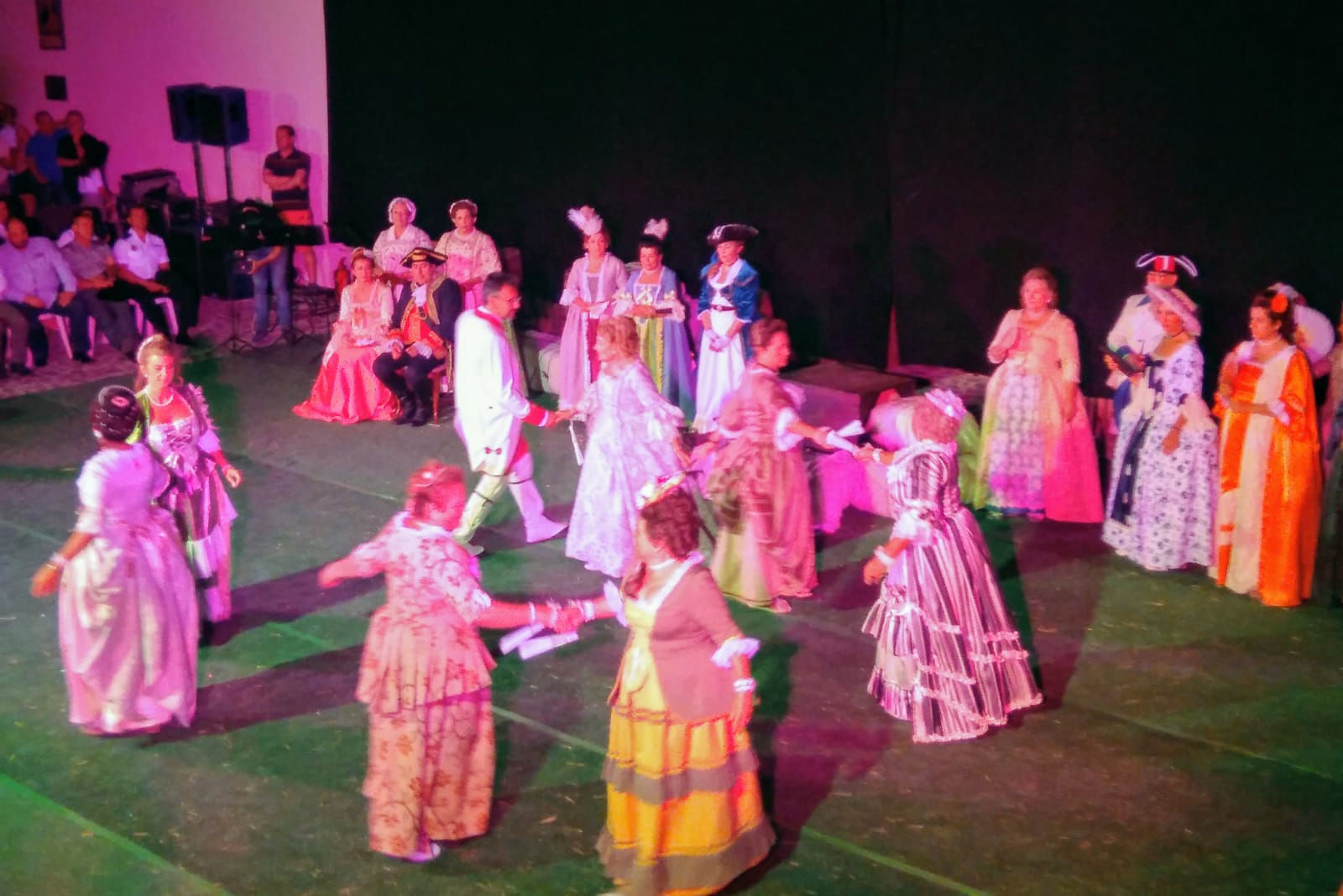 The way they reenacted the siege was very impressive.  The side of the church was set up as the fort, and the set design was pretty amazing.  The soldiers had period guns but have to purchase AR-15 magazines and they were “firing” the weapons, and there was a lot of gunfire and explosion noises. 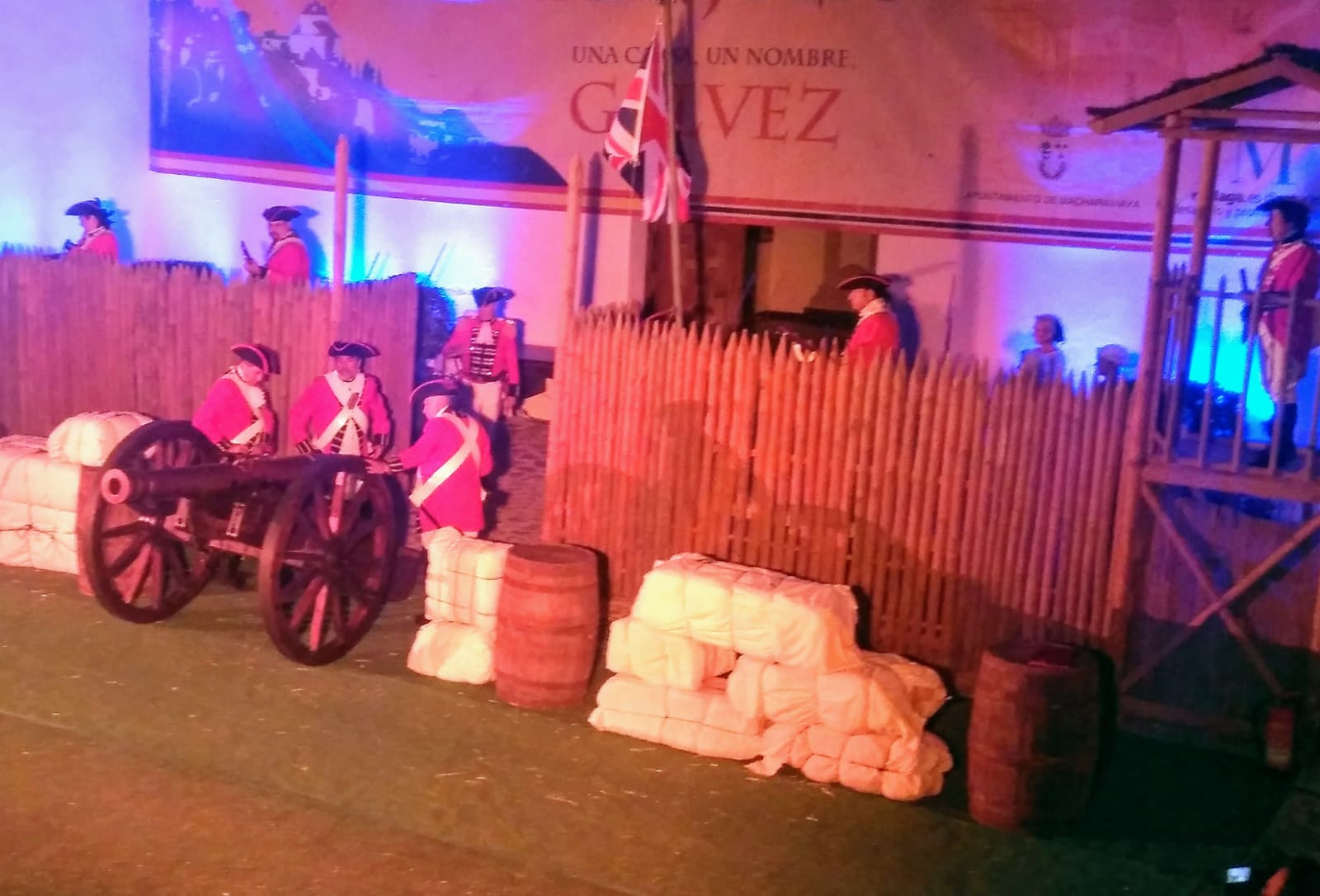 After the reenactment was done, the fireworks show started.  I was concerned about getting out of town with all of the traffic and narrow roads, so Bruce and I were actually driving while the fireworks were going on.  Once I was on the side of town where we originally drove in, I pulled over and we got out and watched the last part of the fireworks.  I’m seriously spoiled.  The August fireworks celebration in Almuñécar is the best fireworks show I have ever seen, and anything else just pales in comparison.  Still, they had a good finale!

The entire town should be commended for how everything was put together.  It was truly a great experience.  While I was sad that Heidi didn’t go, Bruce, Mark, and I enjoyed ourselves immensely, and that may be the new thing we do every 4th of July.

Many thanks to Mark for his recommendation to attend as well as the use of his photos in this post.  And also thanks to Bruce for being the Navigator and travel buddy to celebrate the 4th of July (on the 6th).

The Ayuntamiento (Town Hall) for Macharaviaya has a website for all of the town’s activities.  If you’re interested in visiting the town for next year, make sure to bookmark it. As the 4th of July is not an official holiday in Spain, these events tend to take place on the nearest Saturday.  Check with the town hall for details.

Don’t miss out on the fiestas.

Every this party is celebrated in style.  The participants are wearing late 18th century American costumes and act it out well.  This year it will take place on Saturday, July 2, 2022, starting at 20:30.

You can see what the ayuntamiento has listed for fiestas here.  There are videos capturing the moments on Youtube, Watch Here.