Let me just start by saying “I love our Spanish town of Almuñécar”.  As with most places in Spain, there is always something to celebrate and this weekend was no exception.  The town is full of tourists and there is an energy we just love.  For the past 5 days, we have been partaking in parades, parties, friends and tourist sites.  I will just warn you, I am wiped out, so be prepared for me to just ramble on in this post. 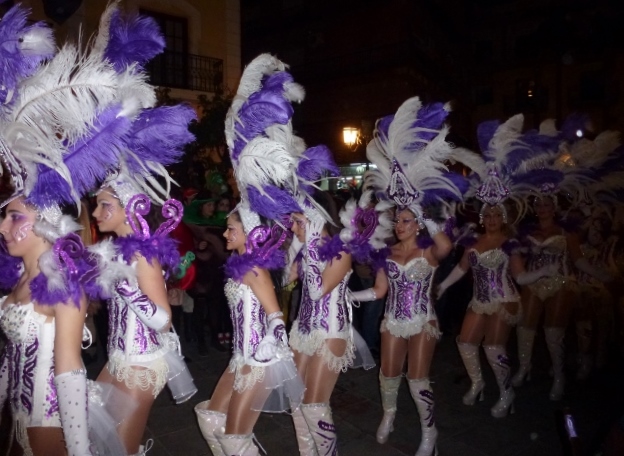 It was a  holiday weekend and the kids scored both Friday and Monday off from school. Friday was Día de Andalucía, celebrated on the 28th of February,  and it just so happened to coincide with the Carnaval festivities this year.  I knew the weekend would be full of activities, but I wanted to get the exact info.  So on Thursday, I stopped by the tourist office to see what was going on.  Hot off the press, I picked up the printed materials with details of both holidays and noted there were several Carnaval parades and parties.  I blasted out a quick email to some of the other newer expat families in the area, so they were aware of the festivities.

Side note: For some reason activities aren’t published until the week prior, sometimes the day prior to the actual events.  We are now used to this, but c’mon people you must know what is happening well in advance!  Why not share that info with the rest of us with a little more than a couple of days notice?

On Friday there was a parade to raise the Andalucian Flag and immediately following was an all afternoon party in Parque El Majuelo.  This was a traditional afternoon party in the park, complete with Flamenco dancing, bouncy houses/slides, a huge paella and several other activities.  We met up with our friends, the Ullan family from Ullan Adventures (temporary 2 month residents of Almuñécar). 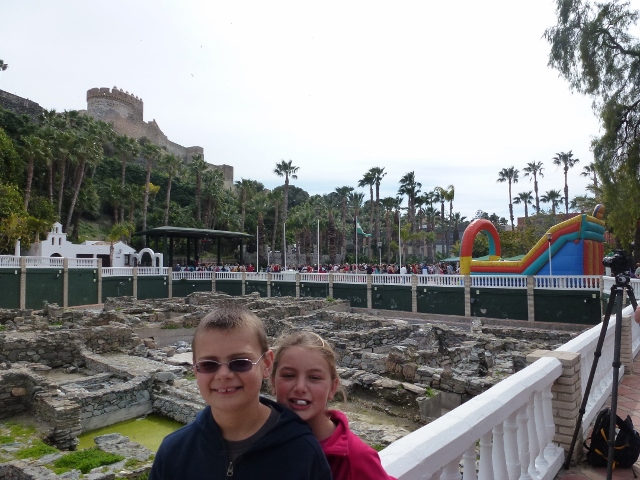 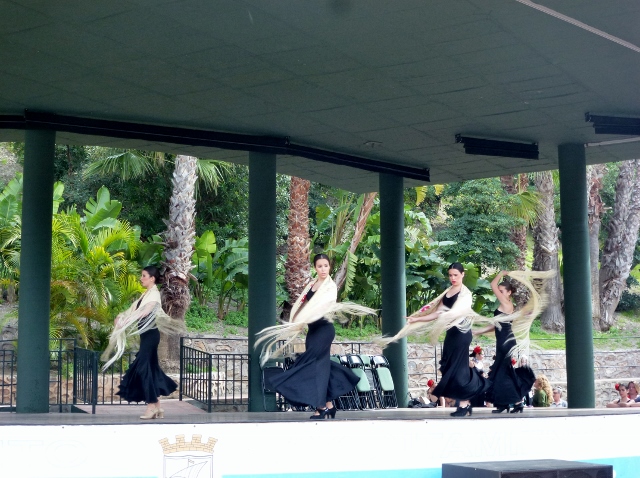 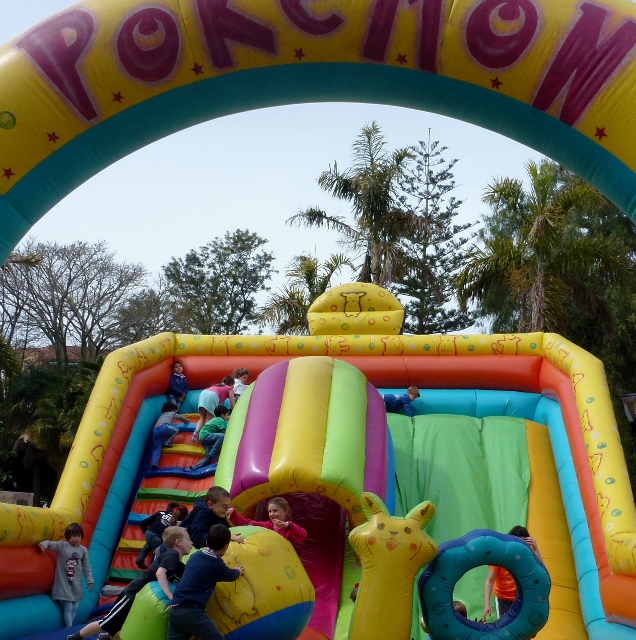 A little fun for the kids at the park. 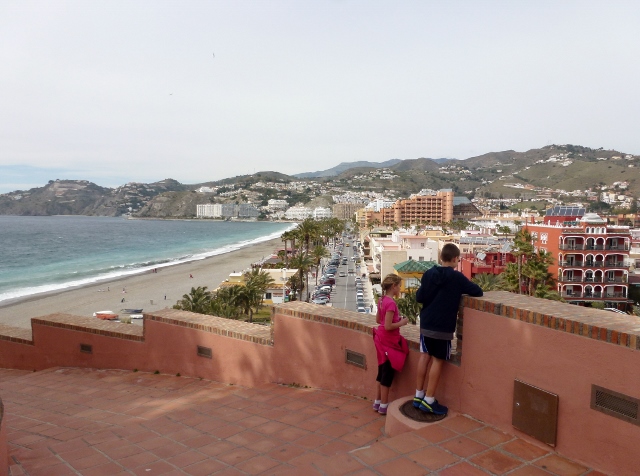 Alan and I have been wanting to capture some time-lapse photos around town and figured this would be the perfect weekend, full of activity, to do so.  Alan took photos at the park, along the paseos and then later from atop the San Miguel Castle (the castle was free today, so we took advantage of that).  It is only a couple of euros to begin with, but when we just wanted to go take a few pictures, it was nice that it was a freebie!  We met up with the Ullan family again at the castle and then hung out for a bit at the park below.  We ended up walking over to our favorite pizza place, Farinel, and called it a night. 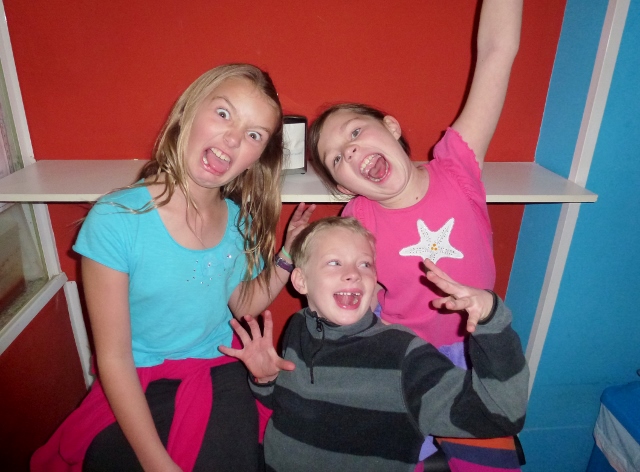 On Saturday the Carnaval celebrations began.  From the print out, it appeared there were about 2 parades each day.  One midday and one in the evening, with a party to follow each evening parade.  From what I was told, the early parades were more for kids and the evening parades were bigger and better.  I was remembering Carnaval 2013 in Cadiz, and had high hope for something spectacular from our town.

The Ullan family came over to our house for dinner and then we headed out at 8:15 pm for the parade.  It was going to start at 8:30, but we knew the route and would just catch up with it where ever it was.  We trekked downtown only to find it was business as usual.  There were no streets blocked off, no music playing, no costumes to be seen.  What the heck?

This flyer I have in hand has the exact route and we were in the middle of it, well of nothing.  Then in the distance the kids and I could hear some drums.  We ran ahead to see and we could see a bit of dancing going on in the distance.  Turned out it was just a few party goers having fun.  I asked a couple of clowns walking by about the parade and they said that the parade on Sunday midday was “the one” to see.  This night was just a party at 10 pm in the town square.

At this point it was about 9 pm, so we all made our way to the town square.  There was a stage, so that was promising!  We eventually did get word that there was a bit of a parade going on where we thought it should have been and we ran back over to catch it.  It turned out to be one group of feather covered dancers in some seriously high platform thigh high boots.  There was music and we followed them for a while and had a bit of fun.  We returned to the town center and the party was now going.  The feathered ladies (with the token guy) eventually made their way to the town plaza as well and the party was now official. 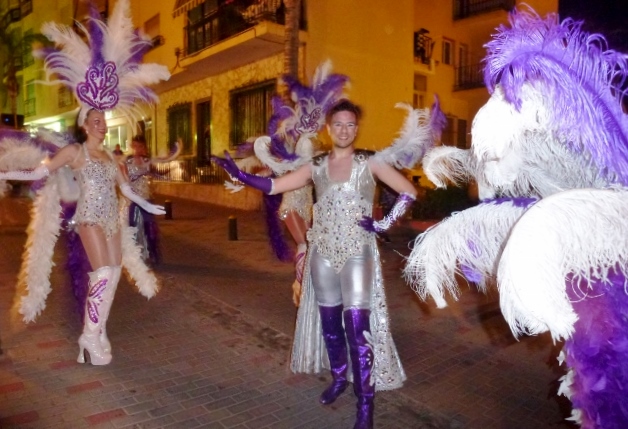 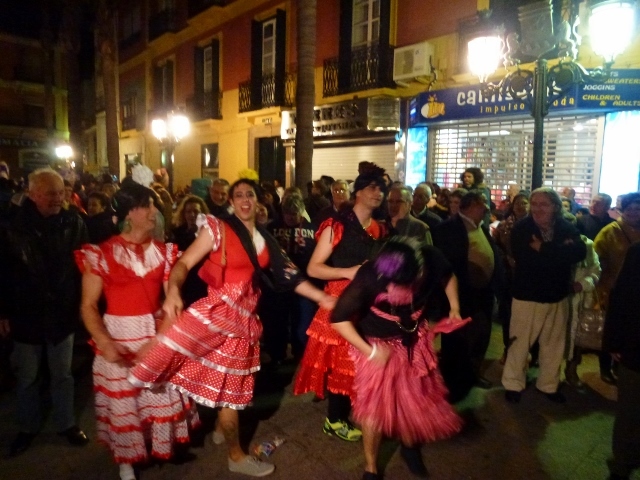 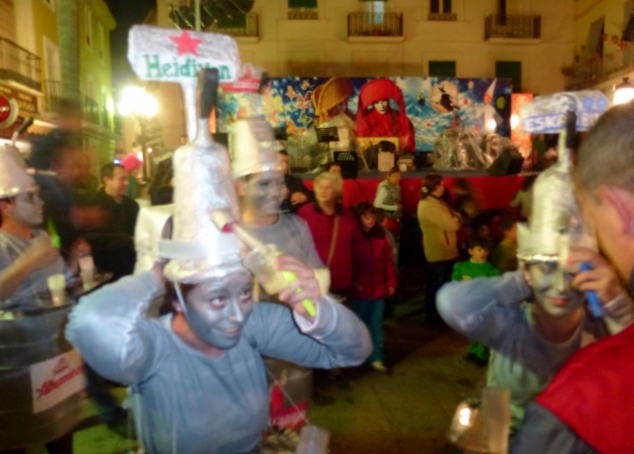 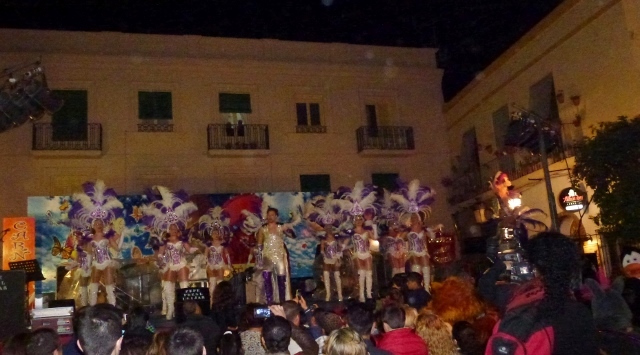 We ended the night a bit earlier than most of the locals as we were heading home at 11 pm and swarms of people were just arriving.  I am sure it was a good time!   We all met up again the next day to see the “big parade”.  This was a bit bigger than the night prior, maybe 5 groups of dancers.  It was fun to watch and it looked like they were all having fun.  There was another parade later that night, but I think we were all DONE with trying to find the parade and then have it be a small deal.  Hey, I’ll be honest with you, it was far more spectacular than the parades in Apex, North Carolina. 😉 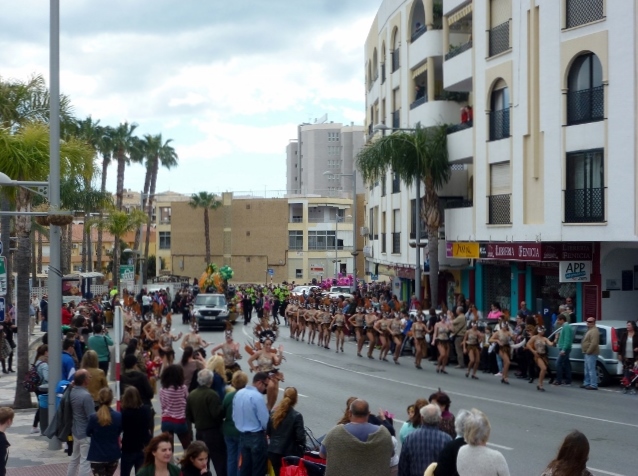 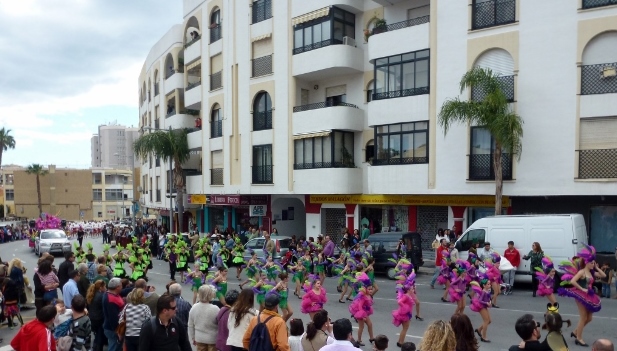 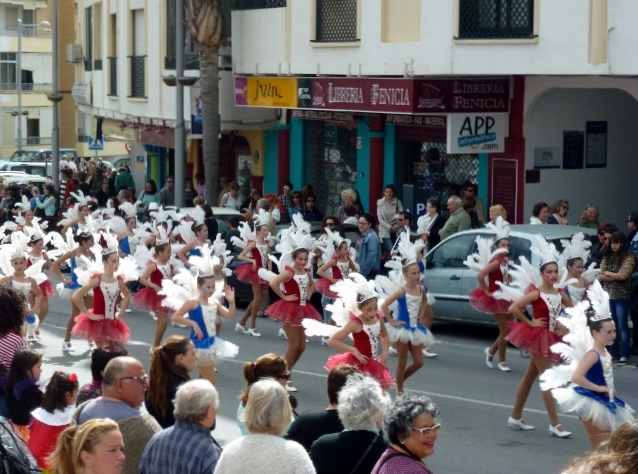 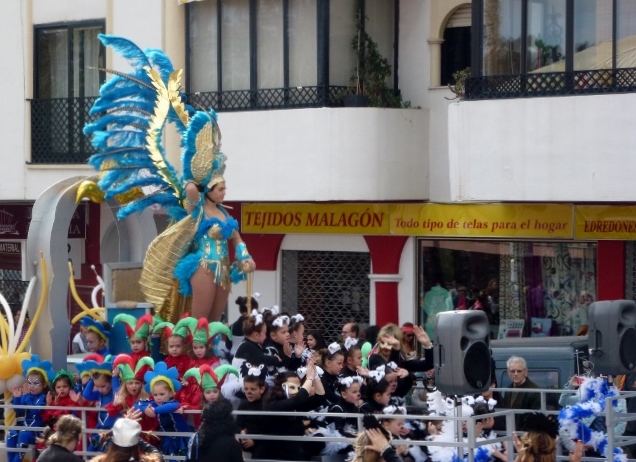 Today was our final Carnaval parade at the school.  We had a blast last year and each class had a theme to dress to.  It was great seeing a mass of lady bugs, sea creatures or butterflies.  At 11:30 am there was a party at the school and the kids all paraded around town with music blasting out of a truck the entire way.  This year was a bit of a let down in comparison.  There wasn’t a theme for the kids to dress, so there was not a mass of one type of costume.  They did parade around town, but without music.  That just made it feel more like a walk along the beach rather than a celebration.  There was plenty of music at the school and the party vibe was going there. 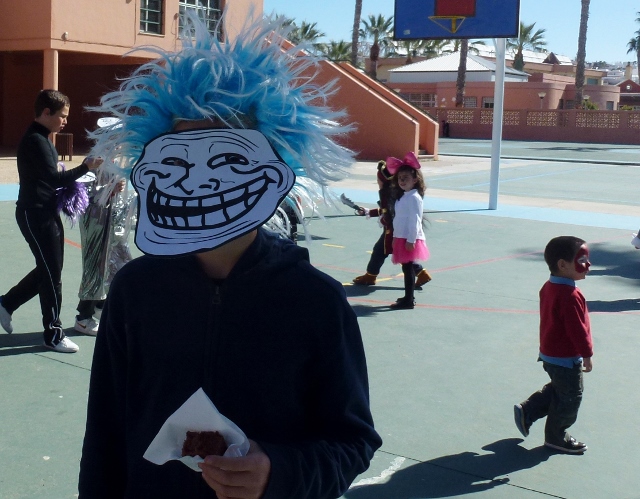 Lars as a troll – Carnaval at school Almunecar Spain 2014 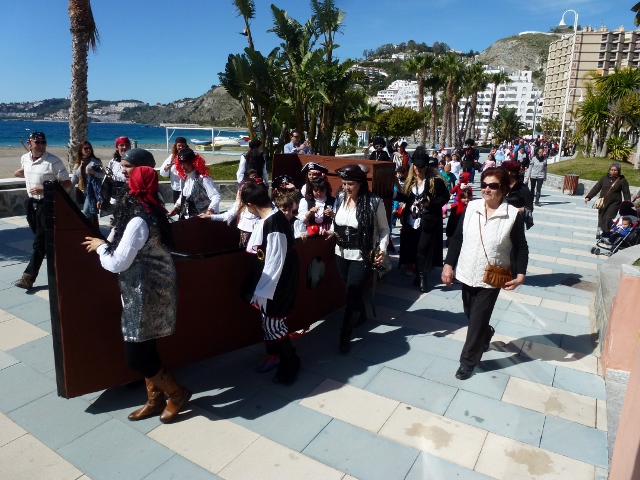 The pirate mom group leading the way along the Paseo 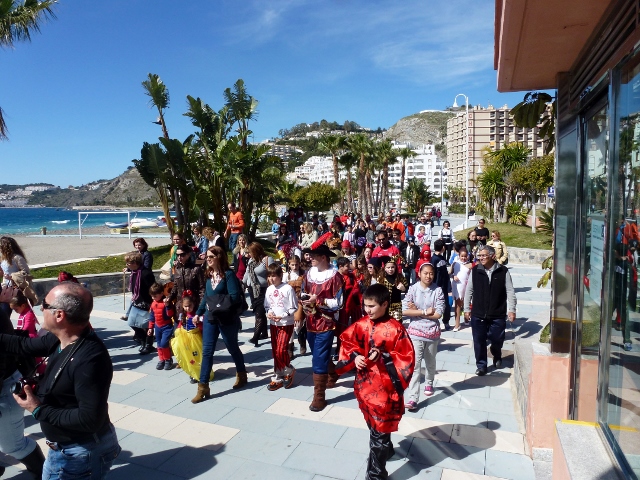 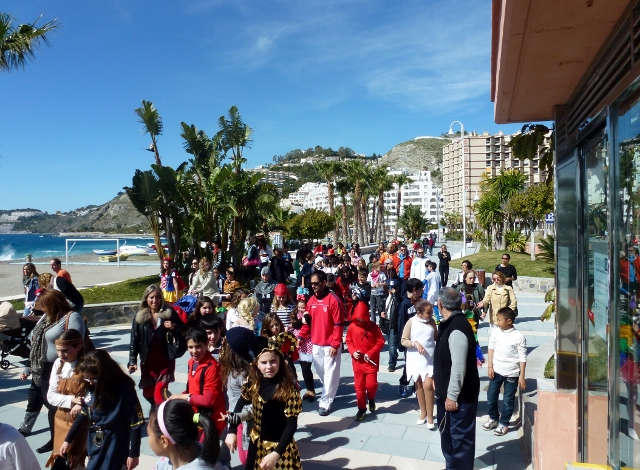 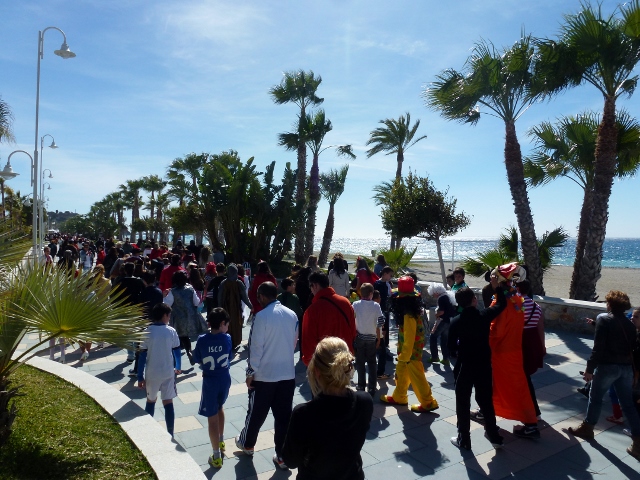 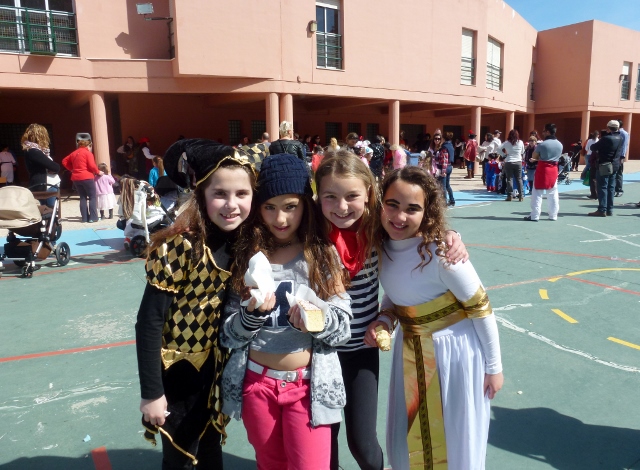 All of these parades were nothing in comparison to the processions over Semana Santa, but they were fun.  I am not sure if I was just not feeling it this year or if it was just not as exciting.  I am sure some of it is related to us not being “new” here anymore, but I am not sure that is it.  There just didn’t seem to be as much energy as in past celebrations.  Of course, this was our first Carnaval here, so maybe this was the norm.  I know it isn’t fair to compare to Cadiz, as that is one of the largest celebrations on mainland Spain.

Am I just becoming a party pooper?  Perhaps we’ve been so spoiled with just happening upon awesome things and now that we are looking we aren’t finding them.  I feel like we ran all over this weekend looking for the excitement.  Instead we found small celebrations, not typical of this town.  That said, the party at the park on Friday was great and typical.  Well, at the least we had some good quality time with friends and now need to just get back into our routine and “work”.  Ha!

As I looked at all of the photos for this post, I realize I did have fun.  I think my expectations were a bit too high.  I am just feeling in a blah funk lately.  I am going to have to dig in and see what is going on.