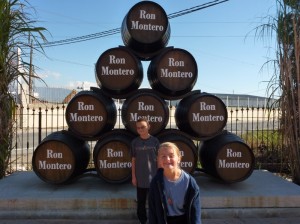 What do we love most about being expats and living in Spain?  We love to explore the local culture!  Just 15 minutes from our home is the Bodega Montero (Ron Montero Rum Distillery).  The factory and cellar for Ron Pálido Rum!  While we aren’t huge hard alcohol drinkers, we thought it would be good to take the free tour.

Bodega is a Spanish word that may refer to: a warehouse, a winery, cellar, bar or convenience store specializing in Hispanic groceries.

Ron is the Spanish word for “Rum”

Ron Pálido or Ron Montero is very well known Spanish Rum and can be found in most local Spanish stores.

Costa Tropical was well known for its sugar cane production for more than 1000 years and Motril was at the hub.  We plan to visit the Pre-industrial Sugar Cane Museum in the near future.  This museum shows the manufacturing and commercialization processes used between 13th and 18th Centuries.  We can’t wait to go check that out as it is supposed to be a one of a kind museum in Europe.  Motril is the nearest “bigger city” to Almuñécar, so we are often there for shopping rather than tourism.  We are now making a point to discover what is right tourist sights are right under our noses!

Ron Montero Bodega (Rum Distillery) was founded in 1963 by Francisco Montero Martin, who can be best described as a gentleman with a refined taste for quality spirits and a never-ending desire to achieve the “perfect rum” characterized by an exquisite taste and fine aromas.

This Rum distillery is run by a family which has been cultivating sugar cane for generations, whose guiding principles have always been quality of its products and artisanal production techniques, the laying of enormous importance on the quality of raw materials used, and scrupulous respect for the Crianza times in the system of “Soleras” and “Criaderas”.

Today Rum Montero sells 240.000 litres of rum a year and the Motrileños, the people of Motril, together with those who have had the opportunity to try this rum, are its most enthusiastic ambassadors.  Despite sugar cane production having come to an end in the area, Montero Rum keeps producing its tasty products the same way they have always done.

We arrived on a Saturday and joined the tour in English.  Our tour guide was a family member of the founder and his wife was offering the Spanish tour.  This rum distillery was once the site for production and storage.  It has now become storage only and their production is in a factory nearby in the hills.  There are several sites with information on the area and the Bodega.  If would like to read more on Spanish Wines.