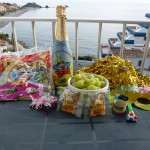 Our preparations for New Years Eve in Almuñécar, Spain

A few days ago we returned from a wonderful trip to Paris.  Now what should we do for New Years Eve?  I did a little research on-line and read that the town of Almuñécar hosts a party in the main town square, just in front of the Town Hall.  Our research also included a little asking around and found out about the Spanish traditions on New Years Eve.

It seems that this evening is mainly spent with family and friends at home.  At the stroke of midnight you are to eat one grape with each “gong” of the clock for good luck.  (Okay, how many grapes is that?   Yep, 12 grapes!  One every 5 seconds).  Then you head out to the streets to party.  The kids were very excited and just had to partake in this tradition of grape eating.  We also decided we would check out the Town Hall. So, next was to wait a day for New Years Eve to arrive.

Lars was working on his homework downstairs and Anya was outside playing.  I was still typing up blog posts and editing pictures from our Paris trip, when “ping” up pops an email.  The email was from Lars, downstairs!

dear mom,
As you know tonight is New Years Eve, i am so excited  i cannot focus on my homework. i guess i am just counting down the hours until Anya and i put a grape in our mouth every 5 seconds. hooray only 11 more hours.

As you can see the kids were very excited and it was a long day.  While picking up a few items at the grocery store this morning, we noticed they were selling little fiesta kits for under 1 Euro.  We picked up a couple for the kids as well as some Champin (sparking juice).  The kids were really going to live it up now.  About 6 pm, Alan and I decided we wanted to adorn ourselves with the fun Fiesta hats too.  Out we go to buy another 2 kits.  Now we were set.

We watched a little TV and at 11:30 we sparkled ourselves up, grabbed the 48 grapes and headed out to the Town Square.  We arrived about 11:40 pm and there were a hand full of people roaming around.  At least we weren’t the only goofy ones wearing the streamers and hats.  We did have fellow sparkled people and within the next 10 minutes more and more people began to arrive.  Many were carrying bottles of champagne, little cups with their grapes and other festive items.  Ah, now we were in the right place. This is far better than the 4 of us sitting at home waiting for midnight! 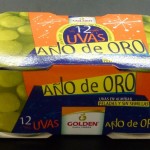 They sell cans of 12 grapes in the market, just for New Years Eve

There were 100+ people out there with us waiting for that clock on the Town Hall building to strike 12.  Hoping that the church just up the hill would sound off its bells. Two minutes to go! Start handing out the grapes.  (We of course had the globe grapes, rather than being wise and buying the tiny grapes.  They even sold can’s of twelve. Oh well, we would give it a go.)

Typical Spain for us.  There wasn’t really any organized party at all. It was just a bunch of people who showed up at the Town Hall Square.  The entire crowd in the Town Square was looking around waiting for the other to begin.  There was no countdown, though one group of fun people created their own countdown yelling out 10, 9, 8…. So most of us followed their lead and enjoyed the moment.

We began to hear fireworks all around us, but no church bells. It was time!  We all began to shove grapes in our mouths and gobble them up.  By the way, this is next to impossible to accomplish with globe grapes.  Everyone was eating or drinking, so there wasn’t much noise at all.  It was very strange for it to be quiet and not have people screaming and making noise.  Then moments later the noise from the people began.  This was so much better than just sitting home. Sometimes you just gotta make things happen for yourself!  We stayed about 15 minutes or so and enjoyed the fireworks and walked around town.

We arrived home about 12:30 am and had the kids get ready for bed.  About 12:40 am we hear “ding dong”. It’s the door bell. Who is knocking on our door at this hour?  It was a friend from up the street to see if Lars can come out to play.  LOL.  Oh my goodness. The boys have class together and we thought “what the heck” go on and play.  Lars was just tickled. They were heading over to his friend’s house for fireworks.  Anya could go too, but I was going to be there with them.

One minute later we were out the door and walking up the street.  The boys were just ahead of Anya and me, but within sight.  I could see them goofing around on the ground and then a HUGE bang!  I realized he had fireworks with him and they were going to do them now.  Oh, I am so glad I came to see.  Don’t want the boys out on their own in the middle of the night.  (I am sure that isn’t what they were thinking, yeah a mom is here).  We had a bit of fun and then ran home to get Alan and a few things to blow up (an orange and a muffin).  Now we were all out having a good laugh and watching these items disintegrate right before our eyes.  I am sure this would not be legal in the U.S.

Side Note by Alan

When Heidi came home to get me, I was already comfortable, and was not interested in going out again.  But then she motioned to me in a strange way, and that got my curiosity up.  When I asked Lars’ friend about the fireworks, he showed me.  It was a real (and good-sized) firecracker.  Not some namby-pamby sparkler that is definitely not a firecracker.

If it’s one thing that I have a lot of experience with, it’s fireworks.  I have some great fireworks stories.  They involve fast fuses, burning bushes, smoking hands, and dispatched fire trucks, but that’s for another time.  Needless to say, when I saw the quality of the firecracker, I was sold.

So we grabbed a very ripe orange.  I peeled just the bottom out, and placed a firecracker inside.  A muffin was also grabbed, and we made our way down the street a bit.  The first to be sacrificed was the muffin.  It was carefully placed on the ground, and the fuse lit.  Boom!  Guess what?  No more muffin!

Up next, the orange.  Lars’ friend had taken out the firecracker I put in, and showed me an even bigger firecracker (I’m starting to really like this kid!).  For those of you in “the know”, this bigger firecracker was about the size of an M80.  All those childhood memories of blowing stuff up with explosives come rushing back, and I’m a just a big giddy kid, all over again.

With the orange “loaded”, it gets lit, and we back up a bit further than we were with the muffin, and then BOOM!  Pieces of orange go everywhere.  A piece of orange shrapnel wizzes by me, and almost hits Heidi.  The blast site shows some juice, but that orange is blasted to smithereens!

The next one was a dud, and you’ve got to hate those.  Do I go over and pick it up?  What if it goes off in my hands?  Well, Lars’ friend picks it up, and I tell him, “Es peligroso.” (it’s dangerous), and he throws it away.

The last firecracker was lit and thrown down a drain.  Once it was dropped, this rush of thoughts came into my head.  Is that a sewer drain?  What’s in sewer drain?  Sewer gas!  I hope we don’t really cause some damage here…The explosion was really loud.  So loud that I wanted to see what, if any, damage was done.  Luckily, nothing obvious, so with that, we said good night to Lars’ friend, and went back home.

Well after 1 am, we could still hear fireworks all over town.  There were parties going on in the homes around us.  People are starting to walk the streets and head out to play.  We decided to head home and call it a night.  Looking over our balcony, we see the restaurant below just opened and has a DJ.  How fun that the party begins at 1 am, but we are so tired.  We decided it is still time to call it a night. We had so much fun.

Times Square this was not, but it was a special night none the less. We all want to wish you a Happy New Year from Almuñecar, Spain.

See how other expats celebrate in over 57 countries LINK

They sell cans of 12 grapes in the market, just for New Years Eve

Our preparations for New Years Eve in Almuñécar, Spain

We arrived at the Town Hall Square

Let’s get his party started

Walking back, having a good time. Fireworks everywhere.

Off to light some Fireworks

One tired party hound. She woke at 8:30 am only to fall asleep again, on the couch