Spain really goes all out when it comes to celebrating Semana Santa (Holy Week), as many of the citizens of Spain are Catholic.  This is especially true in the Autonomous Community of Andalucia (Southern part of Spain).  Seville is best known for their elaborate Semana Santa events, with Malaga being second in the rankings.  We decided to stay in our small town of Almuñecar and enjoy what it had to offer. 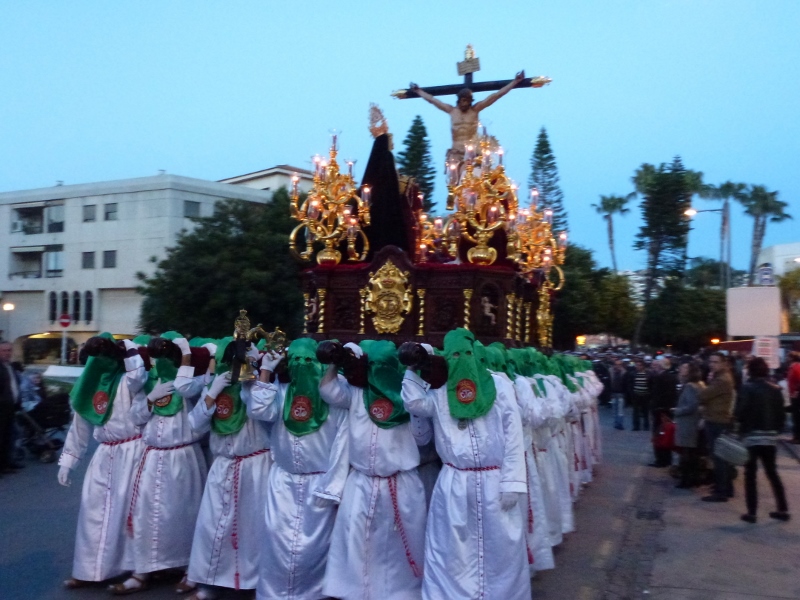 Each day of the week there were public processions and events.  We were away for the first couple of days, but we were able to partake in the events from Wednesday through Easter Sunday.  For our first procession, on Wednesday, we walked into town and the timing couldn’t have been better.  We came to the end of the street just as the first procession was passing by.  There were a total of three processions, beginning at 20:30 with the final one wrapping up at 02:30 (yes, that is 2:30 am!).  We made it for the 1st two, with a stop in between, for pizza dinner, at 11:00 pm.  The kids were thrilled to finally eat dinner like a local and stay out and about until 1:00 am.

It was exciting for the kids to see so many of their friends actually participating in the processions, all dressed up and holding candles.  So for that reason alone, I am most pleased we stayed “home” and enjoyed the events here.  The kids were full of so many questions, many of which we didn’t have the answer off-hand.  A quick check with Google the next day, really helped us out. I’ll just give you one example:

Q: “Why do they wear the pointed cone hats?”  (This is not something that has a good connotation, where we come from)

A: “‘They are penitents – people who are paying for some kind of sin or are asking something of God. According to tradition, they are dressed like that because it makes them look like cypresses, which in turn look like candles, the traditional symbol of a soul ascending to heaven.’

We found it fascinating how elaborate, yet serious the Semana Santa procession was.  The tone was somber and slow with either serious faces or completely covered.  During the procession on Holy Thursday, it felt like a funeral.  Women were walking by in black dresses with traditional black lace veils, known as mantillas, in mourning of the death of Jesus Christ.  The floats (not sure what they are called) range from small to flat-out huge!  The people who carry the very heavy floats are called “costaleros”.  They are honored to carry these “thrones” and do so with solemnity and grace.  They use a small cushion, “costal” to protect themselves from getting sores from the wood rubbing against their skin during the long processions.  Some of them were barefoot and many others had roman style sandals.

The largest floats we viewed were covered in Silver or Gold.  Alan counted one that had nearly 200 men carrying it.  Each man had one arm on the float and the other on the shoulder of the man in front of them.  Each step in sync with the cadence of the funeral march beat, a dull thud in the distance.  They stopped every 5 minutes or so for a much-needed break, as these go on for hours.   I just couldn’t get enough of the ambiance and seeing everyone take such an active role in the events.  Those standing along the side of the road would genuflect (Making the side of the cross from Head to Chest then Left to Right) as each float would pass by.

I am no expert on all of the symbolism in these events or Catholicism, but you can read more about Semana Santa in Spain here.  If you have your two cents to add to any of this, please feel free to comment.  We would love to hear from you.

We did our best to capture the ambiance in a very brief video for you.  Enjoy!