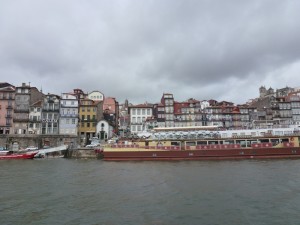 Picture this…You’ve traveled to the city of Porto Portugal.  Maybe you’ve done a lot of research, and you know exactly where you want to go, what you want to see, and how you’re going to get there.  Or, perhaps there is so much to choose from that you get overwhelmed.  The psychology of dealing with too many choices is well documented, but here is a tip to help you digest it all, when visiting Porto Portugal.

Are you ready for it?  This may be the most important travel tip you are likely to ever read, so write this down.  Here it is:

Did you feel the earth shake just a bit.  I know, I know.  It’s not that big of a deal is it? But I will tell you why these types of tours can be a lifesaver.

These are just a few of the reasons to purchase a tour.  Give it a try the next time you’re in a city with too much to do.  We used City-Sightseeing Tours Hop On Hop Off. Check deals here!

We arrived in Porto, and the weather forecast was rain.  All day, every day.  The parking forecast was similarly bleak.  Getting to our apartment, we could see that parking was going to be a serious pain.  We wanted to get around and see the city, but walking around getting drenched was not my idea of a good time.

So it was decided that we would do a Double-Decker Bus Tour.  We also decided to add the optional River Cruise and Port Tasting.  So we hop on the bus (Blue Line), and rush to the top.  On this particular double-decker, most of the top part of the bus was open.  Ahhh…fresh air.  Only the first three rows were covered.  At that particular moment, it wasn’t raining, so our son and I sat in the fourth row.

So the bus gets started, and it starts to trickle.

So our son and I scoot forward, and try get our heads under the roof.  And it starts raining harder.  Now while he and I are perched on the very front of our seats trying to keep our heads dry, something unbeknownst to us was happening literally inches behind us.

Side Note #1:  From an engineering perspective, the seat is a pretty amazing invention.  The angle of the seat back, for proper back support is critical.  A curved seating surface can vastly improve butticular (is that a word?) comfort.  For outdoor seating, however further design consideration is necessary.  The choice of seating material can be important for reasons of durability.  One thing that is often overlooked however, is drainage.  Adequate drainage should be addressed when outdoor seating is planned. 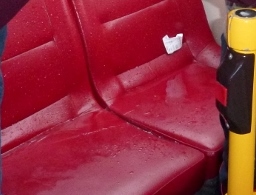 What our son and I failed to realize was that while we were sitting on the very front of the seats, the back of the seats were collecting water.  Obviously the guy who designed our seats missed the class on Seat Drainage.  The other thing that was conspiring against us was we were going slightly uphill.  This increased the amount of water that was collecting.

When the bus started heading downhill, that pool of water had to go somewhere.  And that somewhere was a rush to our nether regions.  I’m not talking about soothing jacuzzi-temperature water.  It was cold rain water.  The effect was umm… exhilarating! Not only did the seats not have drainage, but the upper floor didn’t have any as well.  So the bus goes down hill and there was a huge rush of water (a little river) that went from back to front, which necessitated the front-row passengers to pick up their feet and avoid the pool.

So with a soaked butt, and no end to the rain in sight, we made our way down to the bottom level.  Once seated, it was time to get hooked into the audio portion of the tour.  So we break out our awesome studio quality earbuds that come with the tour.  OK, so they’re not studio quality as such.  They were in actuality pretty cheapo, but given that we were just listening to a pre-recorded speaking message, it wasn’t a big deal.

So we plug the jacks in, and…nothing.  So we unplug, and replug.  Still nothing.  When I unplugged, I did briefly hear something, so it was time to fiddle.  It turns out that I needed to push the jack all the way in, and then pull it out just a fraction in order to hear the audio.  Silly me.

Once we got the audio sorted out, we sat back, and continued with the rest of the bus tour.  It’s common for bus tours to have multiple lines which run through different parts of a city.  In this case, we did a big loop on the blue line which covered the city, but also took us across the Douro River to Vila Nova de Gaia where all of the Port wine tasting is done.

When we finished our loop, we did some walking around Praça da Ribeira.  It was very quaint.  There were nice (but expensive) restaurants, and boutiques selling various handmade goods.  After browsing through the shops, it was time to do the Douro River Tour.

All of us boarded a fairly small craft, found some seats, and relaxed a bit.  The boat had a large indoor section, with a small open section at the fore of the ship.  We alternated between the inside and outside.  I offered to take pictures of couples or families.  (Gotta build up the Good Camera Karma.).

The boat took us under the famous Porto/Gaia bridges, the most famous of which is the Dom Luís Bridge.  It was designed by a person who was involved with the same company that designed the Eiffel Tower.  The boat turned around, and headed out towards the Atlantic.  We were able to clearly see the man-made embankments that protect the mouth of the river.

It was about an hour-long, but it was very relaxing.  I was able to talk with some of my fellow travelers, take pictures, and take in a different view of the city.  Highly recommended!   Check here for the Duro River Cruise deals!

There are also many organized tours for you to enjoy from being active on walking or biking tour, to enjoying a food or wine tour.  There is so much to do and Viator has so many great offers for you.  Click here to see their latest Porto Deals!

Family Friendly Places to Stay in The Old City

Read more on “A Must Do When Visiting Porto Portugal – Day 2“.