As we’ve described many times before, we are a family that prefers to drive when we are on vacation.  We like the flexibility that comes with the ability to get off the beaten path.

So of course, we did a fair amount of driving on our Summer 2013 Road Trip through Europe.  Actually we did a LOT of driving? Heidi takes care of all of the planning for our accommodations, and since it’s stressful, and takes her a fair amount of time, I figured that I should handle the bulk of the driving.  Plus, Heidi is an excellent navigator.  As this is the most driving I’ve ever done on a vacation, I figured a post of my thoughts on the subject would be appropriate.

You might be asking, “How many miles did you drive?”.  It’s a pretty big number.  As Heidi mentioned, we drove 7658 km or 4758 miles.  That’s like driving from New York to L.A., and then slightly more than halfway back.  We almost drove a third of the circumference around the Earth’s equator!  That makes for a sore behind, but we saw and did things that we would not have been able to do taking a plane, train, or bus.

My general impressions of driving on our road trip through Europe:

Italy – Our journey through Umbria and Tuscany [Toscana] was very scenic.  The view of miles and miles of vineyards was amazing.  They have crazy drivers though.  The two minor accidents we had (within 72 hours of each other) were in Italy caused by sub-moronic drivers.  The maximum speed limit was bumped up a whole 10 km/hour to 130, so that was pretty nice.  Hey…that extra 6 miles per hour can really make a difference!

The other interesting thing was the way they handled the toll-roads.  We were not exposed to toll roads in North Carolina, but they are used extensively throughout Italy.  Basically, if you get on a highway type road, you’ll be paying some cash.  It wasn’t outrageous, but I would definitely recommend budgeting for tolls if you’ll be doing a driving vacation.  Heidi has shared our Road Trip through Europe Costs and you will get an idea of the price of tolls.

For getting around, I was glad that we had purchased SIM cards (both voice and data) from an Italian carrier.  Being able to pull up Google navigation was a life-saver.  I didn’t see as many supercars as I was hoping for, but I did see a couple of Lamborghinis, a number of Ferraris, and don’t forget about the Paganis!

Austria – Driving into Austria was breathtaking as this was our first exposure to the Alps.  They have excellent signage, and the roads are well maintained.  Again, there are a lot of tolls, but they weren’t excessive.  Once again, being able to use navigation on our phones was very handy.

Our SIM cards ran out of minutes during this leg, so navigating became more troublesome, but we never got too lost, and only had to do a few U-turns. 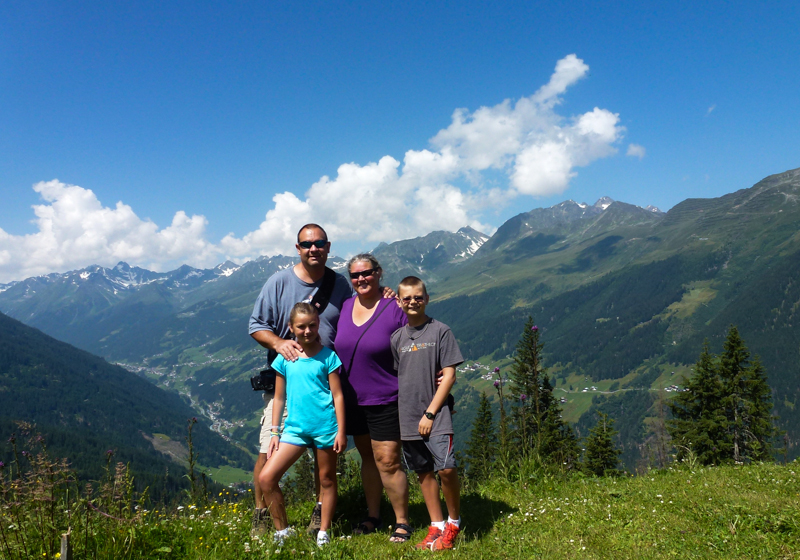 The Alps – Sometimes the windy roads were a bit much, and there were a lot of long tunnels throughout the Alps, so there were times where we couldn’t see the splendor the Alps had to offer since we were inside the mountains.  As I was the driver, I could not always see all of the beauty, but I was mesmerized by what I did see.

Liechtenstein – Our initial plan was to drive into Liechtenstein (I love saying that!), so that we could check another box, but we had run out of minutes on our SIM card, and were more interested in getting to Interlaken.  It turns out, we just skirted Liechtenstein, so I’ll put half a check.

Switzerland – Absolutely gorgeous views, and very nice roads.  We stayed in Interlaken, and it was absolutely stunning!  We are a sea/ocean family, but the spectacular sights convinced us that we could be mountain people too.  There were a lot of windy roads, but the pay-off was always there.

I saw more supercars in Switzerland than anywhere else.  Nice Porsches, Audis, and Ferraris. 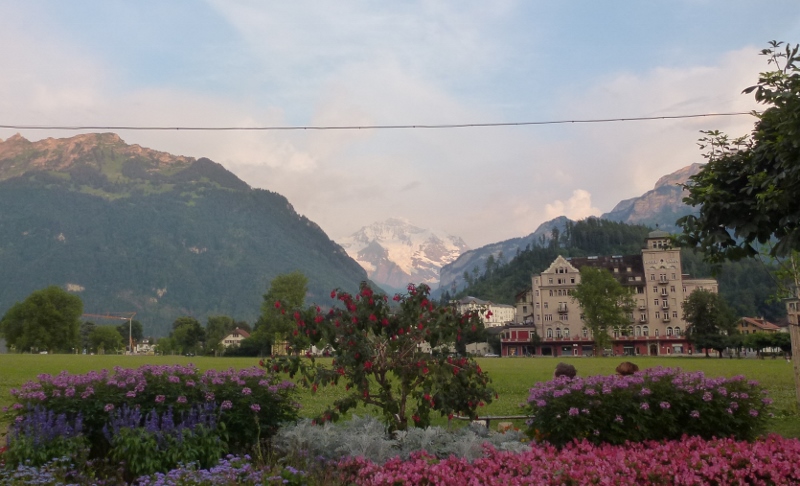 France – The drive from Switzerland into France was probably the most impressive.  There is a group of mountains that jut out, and they look almost other-worldly.  As I recall, they were near Aiguille du Dru (part of the Mont Blanc Massif).  The combination of the mountains and the glaciers make it one of the most scenic views we saw during our entire trip.

Another beautiful scene were the endless fields of sunflowers we drove through.  A lot of the time, the flowers would be facing away from us, so the joke became that the sunflowers didn’t like Heidi, so they were turning away from her.  (After a lot of driving, my sense of humor sort of loses it’s potency…)  We did finally find some fields that were facing us as we drove by and they were spectacular! 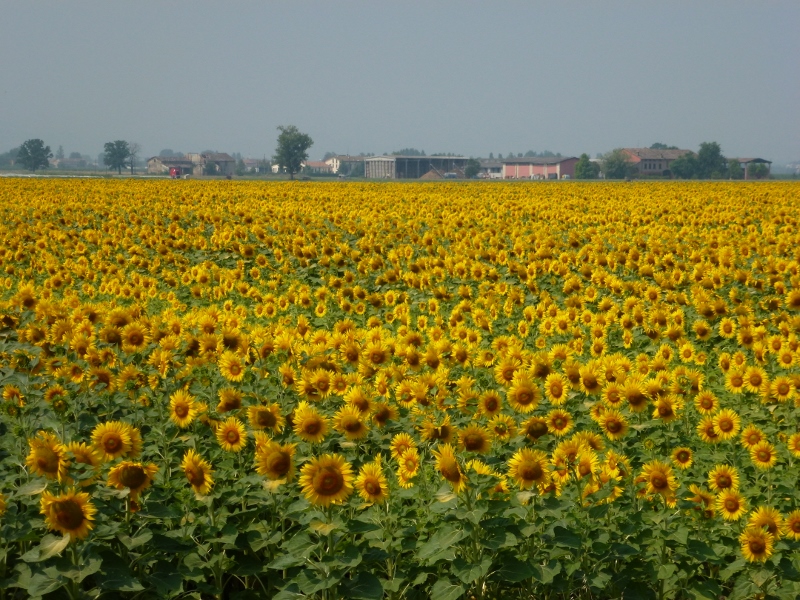 Andorra – Andorra was a bit of an anomaly.  It was very windy into and out of the country, and we got to add it to our Countries Visited list, and we can now say we’ve been to the highest capital in all of Europe (big whoop!).  The kids were not overly fond of the windy roads, but it was beautiful, and I could see myself going back for skiing or perhaps a motorcycle tour.  My birthday is coming up, so if you all want to chip in and get me a gift, that would be great. 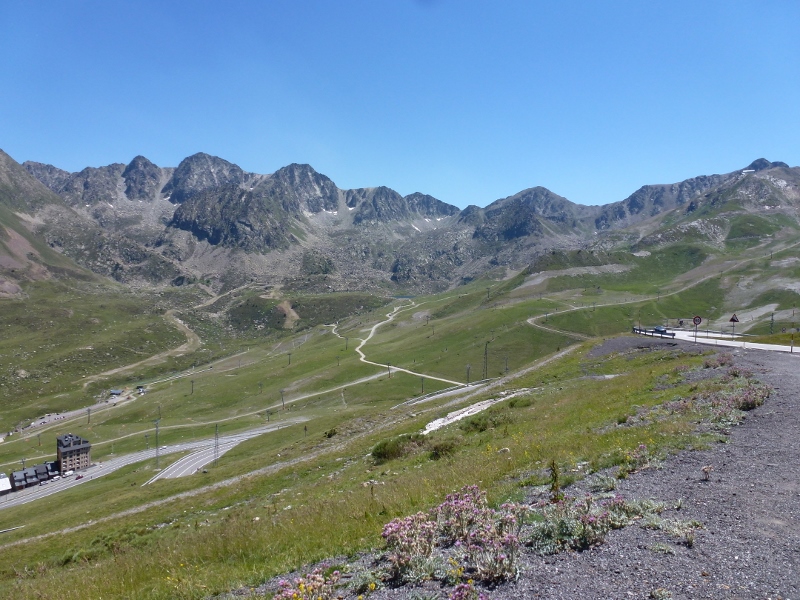 Spain – Once we were out of the mountains and got back into Spain, the terrain became more desert like, and reminded me of parts of Nevada or California, with a lot of open stretches of open space.  Since we’ve been in Spain, I’ve been impressed with the roads, and the quality of the maintenance.  We also knew that we were getting close to home, so that was a bonus.

To sum up, it was a great trip.  The car did great…no mechanical problems, and we got decent gas mileage.  The kids overall did a good job, and didn’t complain much.  Heidi was a great navigator (as always).  Since we did the Summer Road Trip for 2013, I’ve got a radical plan for next year.  Next year it will be the Hitchhiking Summer Road Trip through Europe.  I’m not exactly sure how it will work just yet, but I figure I’ll let some other family drive us around for a change.