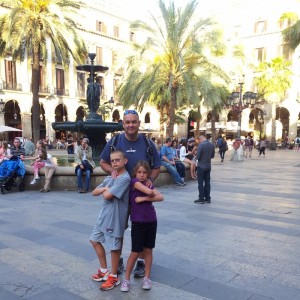 Time for our Summer Road Trip!  As you know we kicked it all off with a Splash at the Big Water Fight!  The next morning we were up, packed and out of the house by 11am for the first leg of our Summer Journey.  Today our goal was to make the 9-ish hour drive to Barcelona or at least most of the way.  The drive through the Sierra Nevada’s was just gorgeous, with beautiful orchards and farms along the journey.  After about 7 hours, just a bit past Valencia, we decided it was time to call it a night.  We stayed in the town of Castellón, at the Vincci Castellon Center.   It was a very nice hotel with a big family room, with underground parking and breakfast included.

The underground parking was a great selling point, until we tried to park underground.  The gate opens and all we can see is a very dark passage,  going down about 100ft, with cement walls on either side.  Remember Alan mentioned the road width in Setenil de las Bodegas, well this didn’t have a sign and we knew it was going to be tight.  Alan made it down the first segment without even breaking a sweat, but then came the turns.  Yep, we had to basically make a U-turn and then another and go down one more long dark passage.  I am thinking “How far underground do they need to make this thing?”  The last turn was a doozy.  With centimeters to spare and me outside of the car on the passenger side, Alan and the kids looking out the driver’s side, Alan again navigated that turn slowly and well.

The car was parked and up we go to our very spacious room!   Rather than a big meal out, we opted to hit the local grocery store for a fresh baguette and some deli meat and make quick sandwiches back at our room.  We settled in and had a good night’s sleep, and then it was time for breakfast.  It is funny we are so used to breakfast in Spain now, yet we pretty much eat toast.  The standard breakfast included with hotels is toast, deli meats, tomatoes, olive oil, cheeses, fruit, coffee, juice and a couple of cereal choices.  I of course love it, but the rest of the family usually goes for cereal and toast.  This time was different! Lars decided he was going full Spanish on us and had toast with tomatoes and he loved it!

After our meal, that seemed to never end as the kids decided they were going to try just about everything this time, we packed up.  Oh no!  It was time to navigate that garage again.  Once again, Alan amazed me.  He made it up both levels with no assistance from me.  Of course, I did grip the hand rail on my side of the car, so I am sure that helped him a little.  Off we were to Barcelona!

On The Road Again

It was now about 11 am and we didn’t need to be at the ferry terminal until about 6pm.  After a relaxing 2 ½  hour drive and over €30 in tolls , we were in Barcelona.   We decided to go ahead and check out the location of the ferry terminal and then go explore Barcelona.  We found the Port and then went to grab some lunch and let the kids run around.   About 5:30 we headed back to the Port, only to find out it was the wrong Port.  No stress as it was just down the road a few kilometers and we had plenty of time.  We arrived at the ferry terminal and checked in.  We parked the car in the area for our ferry and were told to return to the car at 9 or 9:30pm with a hand gesture saying “approximately”.   Hmmm, I thought we were leaving at 8pm?

A Little Exploration In Barcelona 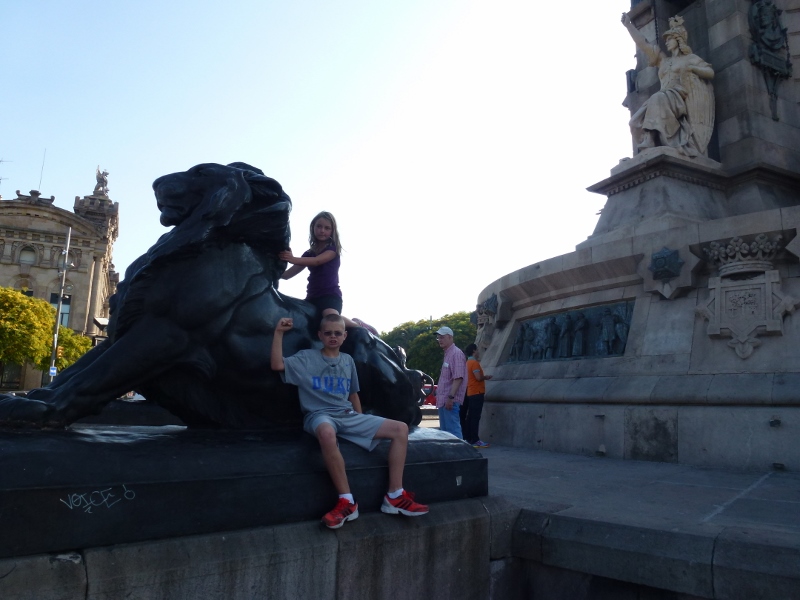 We just followed along and explored the area of Barcelona that is near the ports.  This is also where all of the cruise ships are, so it was very touristy.  We had loads of fun walking around, and the buildings were so gorgeous.  We happened upon several little plazas and just enjoyed people watching. 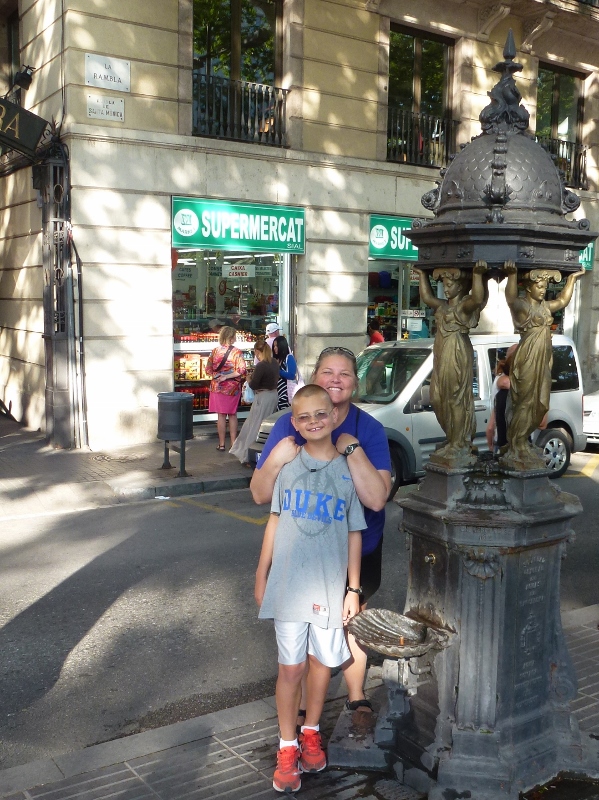 About 8:30pm, we walked back over to the ferry building and loaded up in our car anxiously awaiting our boarding time.  The kids were so excited and kept asking when we were going to go on the ferry.  There were several big ferry boats there and the lanes next to us began to move and slowly disappeared.  When was it going to be our turn?  It was 9:30pm and our group still hadn’t moved.  Then 10:30pm passes, 11:30pm passes, finally after midnight it was our turn to move.  It was over 3 hours late and we were certain that would translate into arriving over 3 hours late as well.  Not ideal, but hey we weren’t driving the 20 hour crossing, so at least it was going to be stress free.   We started our engines and headed to the ferry.  More about the Spain Ferry to Italy…

More about our Summer road trip.