Do you like to experience that rush of adrenaline when you get scared or startled?  Lars does.  Anya does.  And you know I do.  Where do you go if you’re in the mood to be scared?  Well, if you’re the Wagoners, and you just happen to be in Amsterdam, you get scared at The Amsterdam Dungeon.

Note:  Right off the bat, I need to tell you that if you have an aversion to small spaces or are claustrophobic in any way, this probably is not the adventure for you.  Similarly, if you have small kids, or kids that are sensitive to strobing lights, and getting scared, I would not recommend bringing them.

As soon as you show up, the scariness of the situation is brought to the fore as Heidi and I were put in stocks, and the kids pretended they were going to lop off our heads with some very convincing axes.  Once inside the dungeon, it became clear that this was not something that Heidi would like (small, enclosed spaces), so Lars, Anya, and I continued the tour of The Amsterdam Dungeon, and had a blast.  There was definitely some spooky and surprisingly funny moments (I’ll get to that in a bit).  Throw in some 500 years of Amsterdam’s history, and all I have to say is I am glad we no longer have to worry about the repercussions of being labeled a witch.  Whew!

One of the great things about this tour, is that the actors are good.  Very good.  They really get involved with the audience.  With the right group of friends, this would be a great way to get the evening started.  There were a couple of times where I was singled out, and made the butt of some jokes (they called me Traitor Face – sniff), but it’s all in good fun.  Even Lars was brought up to assist in some medieval “surgery”.

In one of the more scary parts of the dungeon, there were some rattling doors behind us.  There was a young woman standing next to me, and I slyly reached out, and touched her shoulder.  She let out a yelp, and I had to stifle a laugh.  I just could not help myself.  The rooms, clothing, and general atmosphere does a good job of putting you in situations ranging from standing before the Grand Inquisitor to being burned at the stake for being a witch.

I’m not going to divulge all of the horrors we saw, but the three of us had a fun time, and if they update or change their show, I would go again. 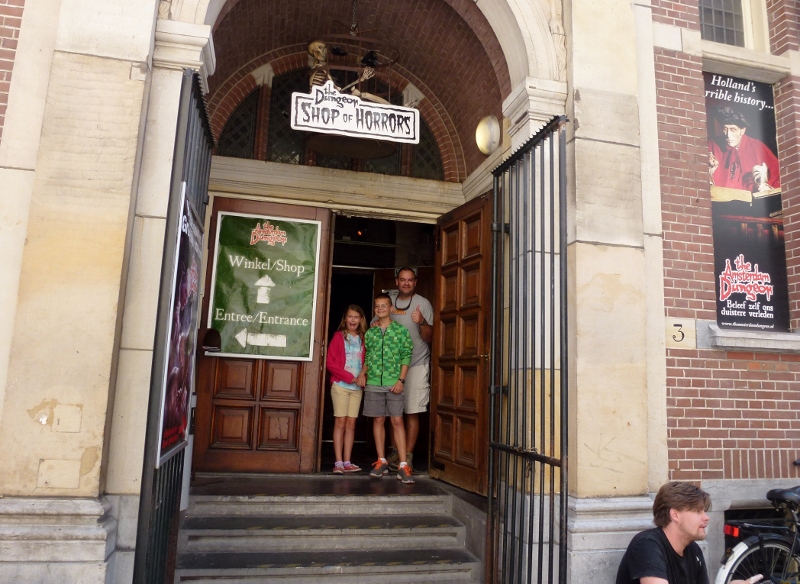 Disclaimer: We would like to thank The Amsterdam Tourism Office for sponsoring many of our activities and transportation.  All of the reviews, recommendations and opinions are our own.