One of the things I really enjoy about our Summer road trip travel adventure is that we’re learning about local products, and how they’re made.  While the Pagani Tour was awesome, we decided to do something a little more down to earth.  We took a tour of Acetaia di Giorgio and saw how they make Traditional Balsamic Vinegar firsthand.

As with most of our adventures, once the tour has been scheduled, the interesting part is finding the location.  We mapped our route, got in the car, and were on the lookout for a factory.  But in this case, there was no factory.  This time, our tour was in someone’s residence.  Behind an innocuous gate was an adorable villa.  The proprietress let us in, and had us sit in the yard while we waited for the other guests to arrive.  They had a cute dog, so we were able to make a new friend, and scratch his belly. 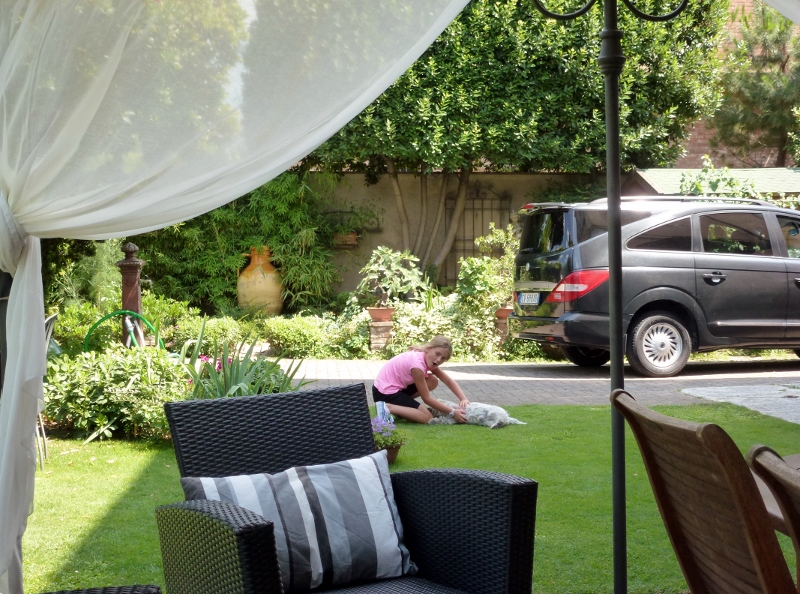 Once everyone arrived, Giovanna took us into her house, and up the stairs to the top floor, which is essentially the attic.  It’s very warm in this part of the house, and this is where the vinegar is stored.  There were dozens of barrels of various sizes, and the air was thick with wonderful smells.  When you think of balsamic vinegar, I bet you think of the dark stuff that is mixed with oil that’s very bitter, and well tastes vinegary.  We were to find out that this is not what we were going to be tasting. 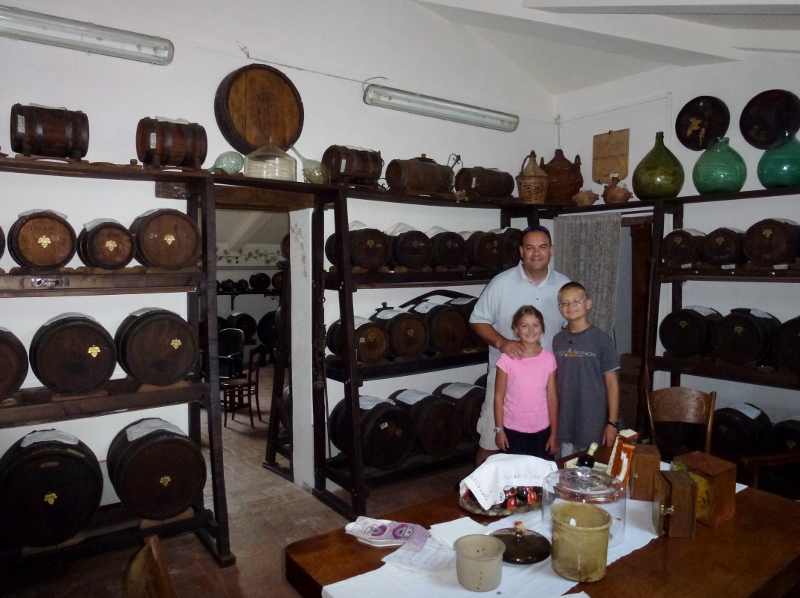 Giovanna explained some of the history behind Traditional Balsamic Vinegar (TBV), and about how the original producer was trying to make wine, but through a series of accidents, came up with Traditional Balsamic Vinegar.  The important thing to know is that the TBV made at Acetaia di Giorgio refers to a specific regulatory process that is very rigorous, and is only available from the Modena area in Italy.  Similar to Champagne or Tequila, in that respect. 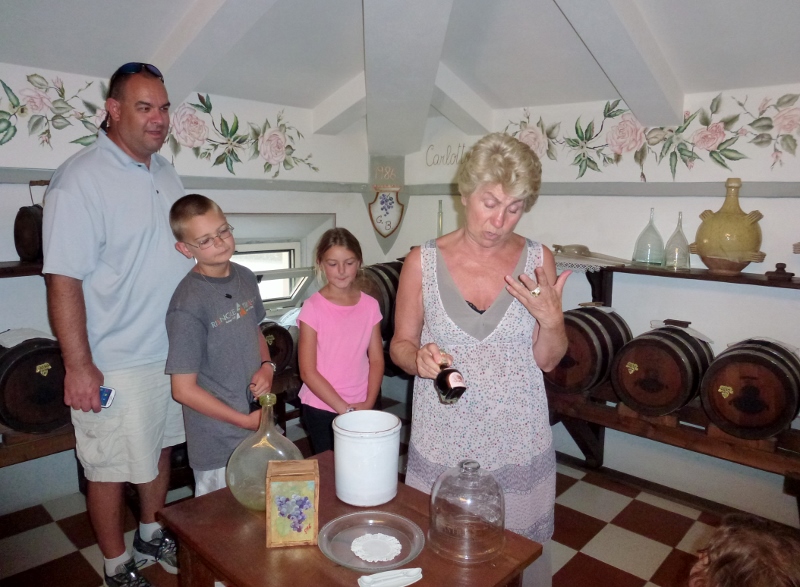 It turns out that there’s a lot that goes into the making of TBV.  While the only ingredients are grapes (grape must), the ageing process is similar to that of a fine whiskey or alcohol.  The minimum amount of ageing is 12 years, and that’s the young stuff!  They have TBV that is aged for over 25 years.  Giorgio (Giovanna’s husband), is the “Master Cook”, and follows the same process that his family has used for generations. 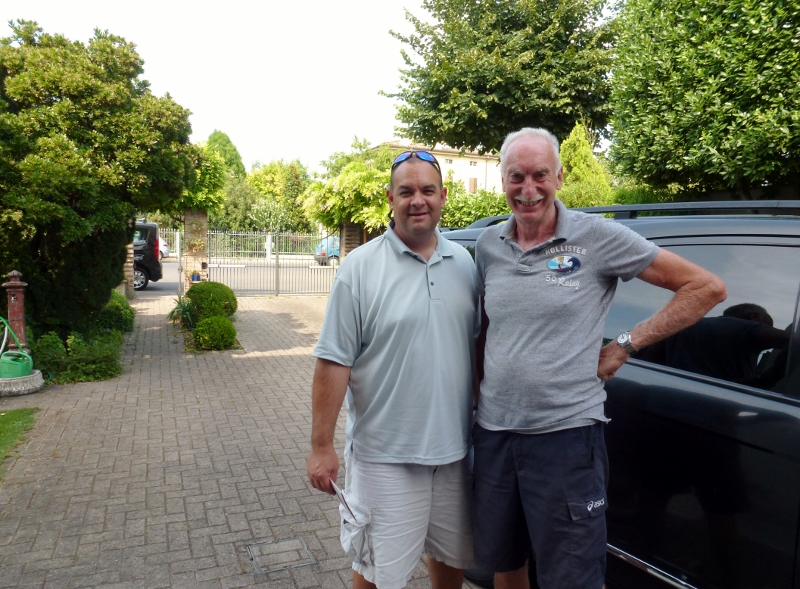 One thing that I thought was pretty amazing was the refilling process.  As there are five barrels from large to small, there is loss due to evaporation, and that loss must be replaced.  Starting with the smallest container, they refill the loss from the next biggest container, and so on.  And this is done every year!

We were allowed to smell from each barrel, and it was amazing how the smell changed from the largest to the smallest.  Once Giovanna gave us all of the technical and historical information, it was down to the fun part:  The Tasting! 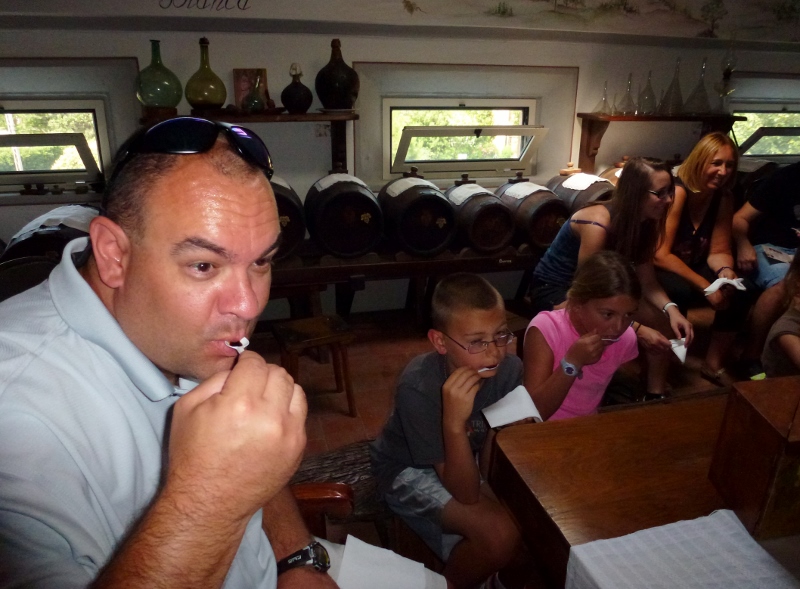 Giovanna provided all of us with tiny spoons, and started us off with some of the younger vinegar.  I hate to call it vinegar because it was great.  It was more like a syrup in it’s consistency, and the sour component wasn’t as strong as I expected.  Overall, we tried several different categories of TBV.  The main difference was primarily the age, which ranged from 12 years to over 25 years.

Giovanna explained one of the special products they make is called Carlotta.  It started in 1986 when Giovanna and Giorgio’s daughter (Carlotta) was born.  They decided to create a TBV for her dowry.  We were allowed to sample it, and it was fantastic.

My favorite was the Giorgio Primo Reserve Cherry [Giorgio Primo Riserva Ciliegio].  This has been aged over 25 years in cherry barrels.  It was absolutely heavenly!  The sour component was very subtle, and the taste was very complex.  I never expected balsamic vinegar to taste so divinely.

The TBV that Giorgio and Giovanna sell is world-renowned, and is pretty pricey.  How expensive?  How about $160 for about 3.3 ounces.  When I come back as a millionaire, I’ll make sure I grab a bunch.  So as expensive as it is, you might be asking, “What’s it used for?”  Well, it’s not a Dip-Your-Bread type of vinegar, but it can be used in many recipes.  Appetizers (bruschetta or salads), main courses (chicken, duck, beef), and even desserts (yes, it’s that sweet)!

Giovanna was a lovely host, and now we’re all spoiled.  From now on, when I have balsamic vinegar, I’ll know that I’ve tasted the pinnacle of Traditional Balsamic Vinegar, and anything else will fall short.

If you have the ability to take a tour, I highly recommend doing so.  It will make for a great memory.

They have free tours in English, and they take about an hour.  At the end of the visit, it’s possible to purchase their products, and they even accept credit cards.