It is very encouraging that the kids are excited to learn Spanish.  They have such a desire to fully communicate with others and would love to just blurt it all out in Spanish, but we just aren’t quite there yet.  They keep complaining that they aren’t learning fast enough, but don’t realize it takes time for these things. We keep telling them it took years to learn English and they are still learning. Either way they want to learn more. 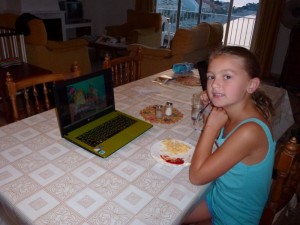 We have been a little cautious with putting too much pressure on them, as school has been a challenge. They will write all about their experiences, when they are ready to share (should be soon). So now that they are asking for tips and ways to learn faster, we are at the ready with info….(not that Alan and I are following our own advice).

We have a great town home that we rented, and were thrilled that it came with British Satellite TV. The downside when wanting to learn Spanish, is that it is in English. One side effect is that the kids are also learning quite a bit British English and learning their humor and accents. This was cool and exciting for them initially, actually they still love it.  We can also get all of the channels in German as well, but not in Spanish.  So what do we do?

Well,  we told the kids to watch more TV!  We have them watch Spanish TV on their computers.  Can you believe it?  I didn’t think we would ever tell our kids to make sure they watch TV every day. They need to watch at least 30-60 min of Spanish TV each day. The rule around the house is “no TV in English unless Spanish TV and their homework is complete”. Most days that means no English TV. That is okay by me!  Anyway, they found Spanish Sponge Bob and Scooby Doo. Each day they come running with excitement, wanting to let us know about the words they understood and what they learned.   Believe me, every little bit helps.

We also have several other tools we are using (Pimsler, various web sites etc).   I explained to Lars the there are several words that are either the same or very similar to English (plan, celebration etc…) He felt a bit more confident with just trying to say “something/ anything”  rather than freeze because he didn’t know the exact word.   We are trying to speak more Spanish around the house and we are planning to work up to a full day with no English (not sure the full Wagoner clan is up for that, so we will see).

By the way, don’t think that they are discouraged. It can be frustrating when you want to just do it now! They are already planning their next 3 languages to learn after Spanish. A different order of preference for each of them, but the same 3. They are very inspired by many of their friends whom are multilingual.

Makes me smile that they have the desire!