Last week each of the kids brought home a note stating it was “Reunion night with the Teacher” on Monday October 1st.  It stated that cycle 1 and 2 would meet at 4pm and cycle 3 would meet at 5pm.  We assumed it was a meet the teacher type of event, so we were very excited to attend.   There was only one problem, we didn’t which cycle the kids were.  I took a wild guess that cycle 1 would be 1st/2nd,  cycle 2 is 3rd/4th  and cycle 3 would be 5th and 6th grades. 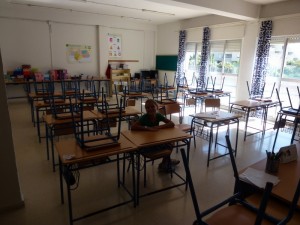 So on Monday, Alan and I showed up, like good “American Parents”, about 5 minutes before 4pm.  We arrived in Anya’s class and her teacher (Carlos) appeared right at 4pm.  We thought it was strange we were the only parents there, so we asked if we were to meet at 4pm. He said yes, it is 4pm.  About 4:10 or so, all of the other parents arrived.  (We really need to get used to this not being on time thing!).

All of the parents sat at the children’s desks and the teacher sat behind his desk. The parent sitting next to us was a nice lady that asked me if we were Americano. Si, Si, Si.   She then asked if we were the parents of Anya. Si, Si, Si.  She then stated that her son in is class with Anya and her daughter is in the same class as Lars. She mentioned that her daughter was telling her about Lars and that he is getting used to things now. I was so excited we had this full conversation in Spanish! I understand so much more than I can say at this point.

He was so animated when speaking that his gestures, helped to describe what he was saying.  We got the gist of it, but it was comical. We now have a good feeling of what the kids experience from 9am-2pm each day. It was exhausting without a doubt, listening so intently.

Near the end of the session the teacher asked if there were any questions. One mother asked a question (not sure what it was), but she was full of emotion and passion. The other mother’s joined in and seemed to be ganging up on the teacher. He would shrug his shoulders and shake his head. So I am guessing it wasn’t his problem.

At that point the side bar conversations began. Alan and I were in the middle of the room and we were surrounded by about 3 or 4 different conversations. All of which were trying to out speak each other. Everyone was speaking 90 mph and as loud as possible.  The passion here is amazing!  We just sat in the middle looking at each other and laughing.

Alan had to leave at 5pm, to go to Lars class and I stayed in Anya’s until about 5:20pm.  I then popped over to join Alan in Lars classroom too.  His teacher is Pepe and he had a more formal presentation with a powerpoint etc.. This was much easier for me, as I could read and figure it out.  Of course it was all just the standard teacher/parent stuff.  Homework expectations, rules etc…

All of the parents were so nice to us, as well as the teachers.  This just goes to show that we have a long way to go with our Spanish.  Baby steps and we will get there. 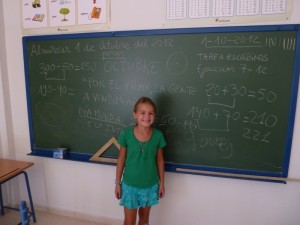 2 thoughts on “Meet The Teacher”