Over the course of our Summer 2013 road trip, we had a lot of experiences.  Some of the most memorable for me were very simple.  It didn’t matter so much the What we were doing, the thing that stands out for me was that they were great moments because we were connecting as a family.  The best memory of the trip was when we rented a boat on Lake Garda Italy.

Lake Garda is a beautiful lake in Northern Italy, and is the largest lake in Italy.  Heidi and I wanted to explore not only the land on this trip, but the waters as well, so we decided that renting a boat on Lake Garda was the thing to do.  It was the first time we had rented a boat, so this was going to be a new thing for all of us.  Obviously, we’ve been on a number of different boats, but never just the four of us, with me as captain.

The morning of the rental, the kids were excited.  Heck, I was excited!  Once all the paperwork was signed and the boat handling basics were explained to me (this is the front, this is the back…), we were off.

I was getting used to the feel of the boat, watching for lake traffic, and generally just trying to be a great captain.  Once I was comfortable, I nudged the throttle forward, and we’re moving at a good clip.  There was a small wake from a boat that had passed in front of us, so I maneuvered our boat so we would hit the wake head on.

As we hit the wake, we caught a little bit of air, and the kids went airborne for a split second.  Heidi wasn’t expecting it, so she gave a shriek, but the kids loved it, and yelled out in delight.  Once the boat settled down, it happened.  Lars turned around, and gave me a huge smile.  His simple expression of happiness brought a flood of boating memories back to me.

As a teen, I would go boating with my best friend Dwayne and his family.  They had a ski boat, and Dwayne’s parents (Frank & Susan) taught me how to single ski, how to drive a boat, and I felt like a part of their family.  Their boating trips were always a blast, and I have fond memories of all the great fun we had.

It was amazing how quickly I was filled with a remembrance of all those great times, and all in a matter of seconds.

Once we were in the middle of the lake, I stopped the boat, called over to Lars, and told him to come over and drive the boat.  His face and eyes lit up, and the only thing that he said was, “Really?!”

I explained the controls, and he got behind the wheel.  He was so nervous (I remember feeling that too, my first time), and once he got the boat up to speed, he enjoyed steering back and forth.  I told him how to scan for other boats, and to look for their wakes.  He enjoyed it immensely.

Once he was done, it was Anya’s turn.  She was enthusiastic to be the captain (technically First Mate), and she practically ran to the back of the boat.  Once again, I explained the basics, and we were off.  Immediately I was struck by how vigilant she was looking for other boat traffic.  Oh, she also seemed to like to go a bit faster than her big brother. 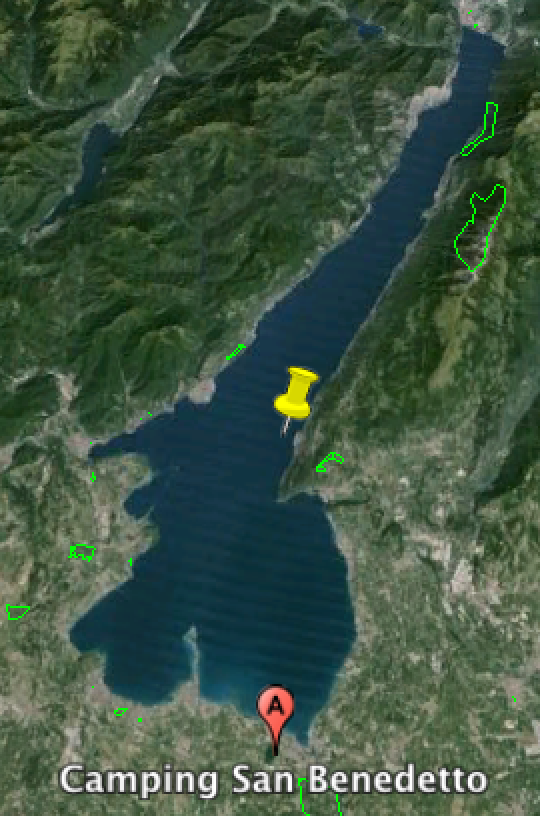 After both kids had done some driving, Captain Alan took over, and we made a bee-line to the middle/center of the lake.  We were staying in San Bennedetto, and wanted to look at Torri del Benaco.  Once we arrived, we anchored about 300 meters from shore, and it was time for the kids to do some swimming.  Lars, still full of confidence from his boat driving, decided to be the first to jump in, and jump in he did.  Now you don’t have to be a rocket scientist to know that a lake surrounded by mountains, is going to have some cold water.

The video captures the “refreshing” nature of the water…

As you can see, Anya was a bit more leery of just jumping in.  After a lot of hemming and hawing, she did it.  Once again, another person confirmed the water temperature.

What about me?  I’m not crazy.  I knew it was cold, and besides, I was busy with all of those important captaining duties.  Plus, I didn’t think the ladder would support me, so I did not partake of the cold water swimming.  I still had fun though.  Once we were about halfway into our rental time, I called everyone back into the boat, and we made our way back to the docks.

It was only two hours out of our forty-three day trip, but boating on Lake Garda Italy is without a doubt my favorite memory.