Generally, I can be an “A-to-B” type of person when traveling.  What I mean by that is if I am at Place A, and need to get to Place B, I will often plot the shortest course, and go straight there.  Not on this trip however. 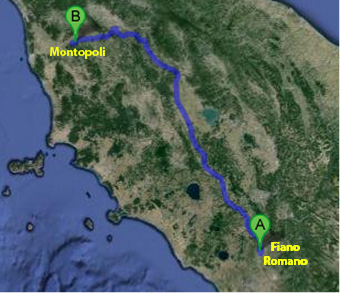 We have been staying at a very nice campground in Fiano Romano (think of this as Place A).  Unfortunately it’s time for us to leave, and our next place to stop is Montopoli (think of it as a Place B).  It’s a small town between Florence and Pisa.

By now, you should know that the Wagoners love water, so I figured we needed a bit of a water detour.  After some searching, I found us a cool sounding place with literally tons and tons of water. 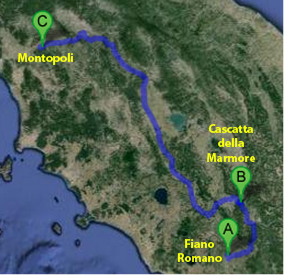 The legend has it that a shepherd named Velino fell in love with a beautiful nymph named Nera bathing in the water below where he was standing.  Velino called to her, and was going to profess his love, but the goddess Juno turned Nera into a river.  Upon seeing his love turned into a river, he went to dive in to the river to be with her.  Juno saw what he planned to do, and turned him into the waterfall, eternally falling but never reaching his beloved.  The reality, while perhaps not so movie-worthy, is still impressive.  It is a man-made waterfall that was engineered during the 3rd century to drain the swampy plain.  At 165 meters, it’s also the tallest waterfall in all of Europe.

The drive there was very beautiful.  This time of year, the province of Umbria is lush and green, and the rolling hills are very scenic.  I knew we were getting close when we started driving up a long windy hill.  As always with driving in Europe, there were some hair-raising instances where we’re driving around a tight turn on a narrow road, and all of a sudden a big semi truck comes around the corner, and he’s two feet over into our lane.  Yikes!  Seeing glimpses of the valley below were worth the occasional “Aaaahhhh I’m going to die!” moments.

Heidi and I didn’t tell the kids what we had planned, and when Lars kept asking (OK, bugging) me about what we were doing, I finally told him:

“We’re going to a Throw Your Kids Off the Mountain excursion.  Unfortunately, we can only go twice, since we only have two kids…”

Lars is not one to be easily bluffed however, so I told him the truth about the waterfall.  Anya was not exactly thrilled, but we got out of the car, and stretched our legs a bit.  Heidi figured out where to buy the tickets, and we all marched our way to the start of our water adventure.

As we walked down to the entrance, you can faintly hear the waterfall.  We passed over a small bridge that spanned some flowing water, and it was moving pretty fast.  Heidi presents our tickets, and as we make our way down, I notice a sign that says something about “Difficulty: High”.  Uh-oh…that doesn’t bode well.  I put it out of my mind, and we start our hike down the thousands of steps that awaited us.  OK, maybe not thousands, but it sure seemed like it. 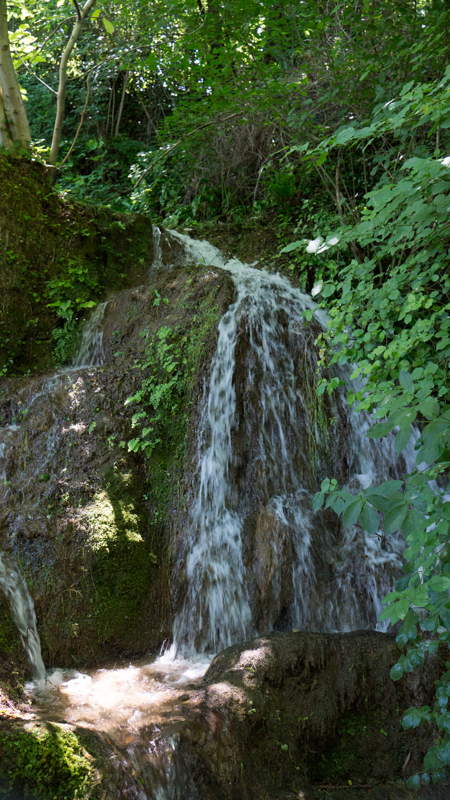 Going down the steps we are greeted with the occasional micro waterfall right next to the path.  The vegetation is green, lush, and very thick.  We get to the first stop called the Belvedere Superiore (upper viewpoint).  This is the top of the waterfall where the bulk of the water flows over.  It’s a breathtaking view, and even though we’re near the top of the falls, we can still see mist rise up from below.  After numerous pictures, we continue the trek down. 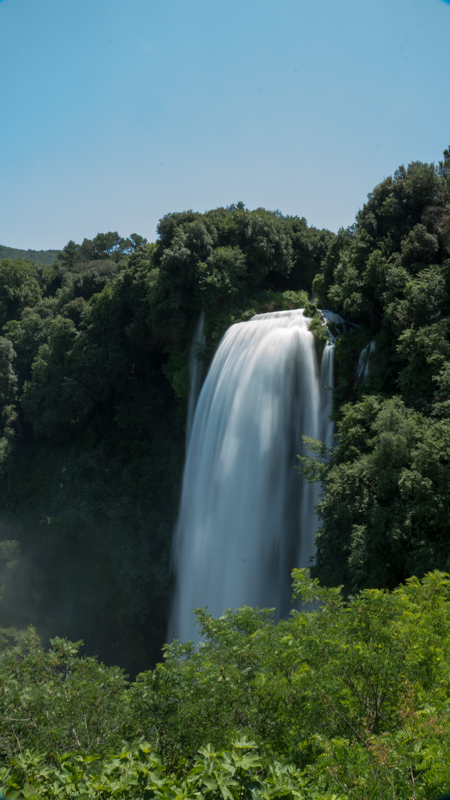 As we descend, the steps get more uneven and steeper, and having broken my tailbone last year on the stairs at our home, I’m a bit leery.  After all, who wants to re-brake a tailbone?  So I’m being extra careful, and warn everyone to hold on to the railing.

As we near the bottom, it’s getting really loud now.  The water is really flowing, and I wonder what it would be like to raft down the section in front of us.  So while we’re at the bottom, we don’t see where the water actually comes down.  There’s a short path to the bottom viewpoint (Belvedere Inferiore).  There is a lot of mist, and I’m seeing people coming back wearing plastic ponchos, and for those not wearing said ponchos, they are coming back pretty wet. 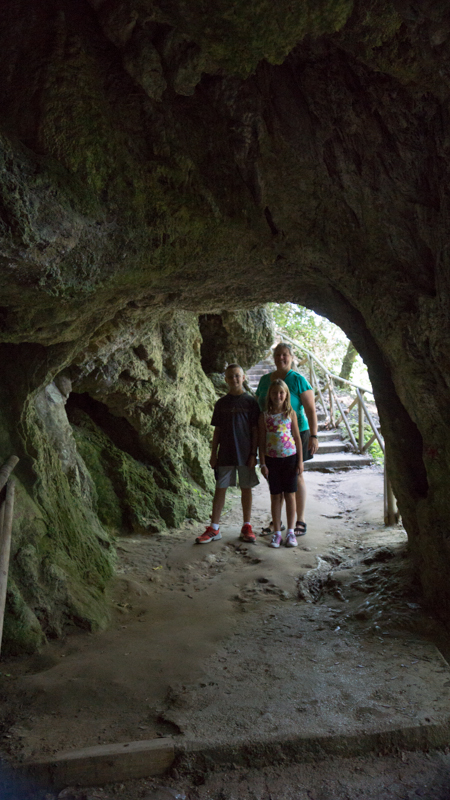 I take Heidi’s camera, and she and Anya go to the viewing area, and come back mildly wet.  Now it’s my turn.  I hand her my camera, and Lars and I are off.  I really like how the mist flows around us, and sort of floats in the air.  Lars’ camera is waterproof, so he’s taking pictures and recording video.  He’s having to shout above the din of the waterfall, and it’s funny to watch.  I take some pictures and video of him, and we make our way back to the girls.

That was pretty awesome!  There is still so much to see here (botanical gardens, different trails and view points), but there about to close access to the waterfall, and we still have a few hours drive ahead of us.  So up, up, up we stride (trudge) up all of those slippery, uneven stairs.  I should have picked an excursion with an elevator!

About half-way up the steps, we see another path.  An Italian lady who is resting on the bench tells me (in English) that it’s a very nice view, but also very wet.  It turns out that we need to walk through the Tunnel of Love to Lover’s Balcony.  Awww.  Such romantic names.  Anyway, once again, we split up to keep the cameras dry, but this time Lars, Anya, and I are going. 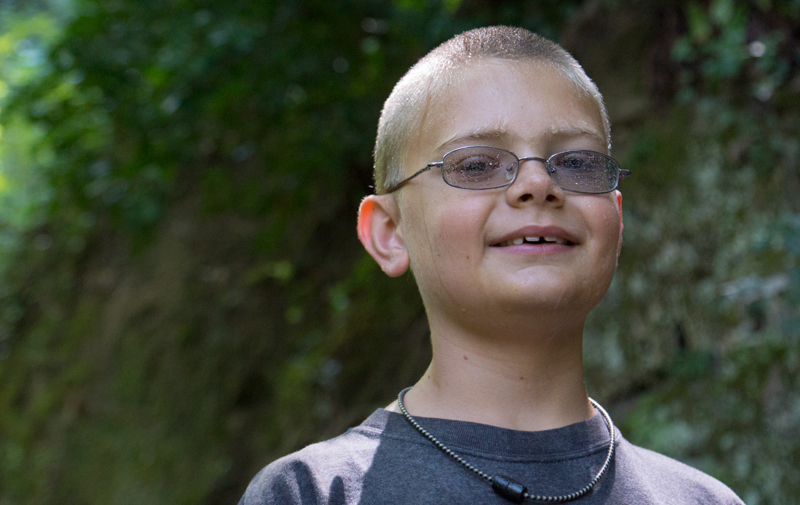 The tunnel is spooky, but you can see the light at the end (heh heh), so it’s not too bad. Once we’re out of the tunnel, it’s like a misty shower envelopes us. A cold misty shower.  It’s very refreshing, but I don’t want to get completely soaked, so I head back.  The kids stay a bit longer, and are dancing around screaming and laughing.

It’s Heidi’s turn, and Anya shows her the way.  Both of them come back pretty wet, and with that, we once again head up the to the top.  I’ve saved you a bunch of huffing and puffing (wheezing), starts and stops, but we finally make it.  As we cross the bridge, we notice that the water is flowing much much slower.  Apparently, the waterfall is controlled flow, and they only let it run for a couple of hours at a time.  Can you imagine the water bill if you forgot to turn it off?

Once we’re at the car, we hydrate, grab some snackage, and make our way down the mountain, and off to Place C.  Not being the typical A-to-B type, definitely served us well.