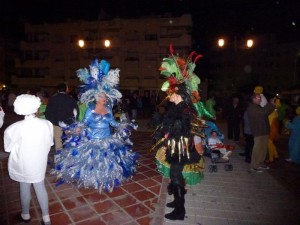 The Carnaval season has sadly come to an end.  We spent the kick of weekend experiencing Carnaval of Cádiz and had a wonderful time.  It was good fun to listen and watch the Chirigotas and be part of the Big Carnaval energy.  This weekend we were able to close Carnaval locally, in the small village of La Herradura.  This is just a 5 min drive from Almuñécar, so a no brainer for a Saturday night activity.

We read that the festivities began at 8 PM and we have finally wised up to “Spanish timing”.  We decided to leave home around 8 PM rather than be there promptly.  As we arrived to the town center, people were beginning to gather.  Just as the Carnaval of Cádiz, everyone was dressed in costume and we even had some singing groups.  Rather than tens of thousands of people, it may have been 100-200.  Once everyone gathered, the parade around town was ready to commence (about 8:40 PM, ah we are learning!).

We followed the singing, dancing, noise making parade the few block to the Town Square. This is where all were collected with a stage and music that we all enjoyed dancing to.  After about 30 minutes or so, the MC hopped up and made a few announcements.  It was then time to have each group or individual in costume to show off up on the stage.  It was a fun party and far more comfortable than the big city experience.  The kids were able to run free and just go crazy!