Well, we were in the school and we there to turn in our papers to go to school and the secretary said Lars and I need to go to class now. My parents were so worried because we didn’t have books, supplies or snacks.  I didn’t want to go because we weren’t ready. They took us to class anyway. 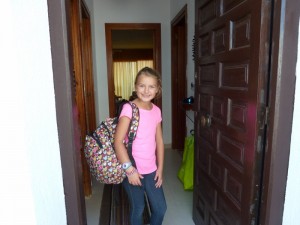 They opened the door to my class and the teacher was standing right there. His name is Carlos. The room didn’t have any color at all, whatsoever.  It was just plain white walls and rows of desks, not tables, full of kids that I didn’t know.  There was no air conditioning, so it was hot.  There was a white board for the teacher, instead of a promethium board.

I walked into the room and stood at the front of the class near the teacher’s desk. He took me by the hand and he held it tight. He asked me a bunch of question in Spanish (What is my name? where am I from? What is my favorite color? Etc…).  I answered them all, but I had to think where I was from because I didn’t know how to say United States, so I said Norte Americana.  I felt a little bit scared because I didn’t know anyone. I was happy because I was in a cool Spanish school. No one spoke English, except for one person in my class. His name is Danelo and he is Dutch.  His mom is from South America and his dad is from England.There was one empty seat and my teacher told me to sit there. The teacher was right in the middle of mathematics and I didn’t know what they were saying because it was all in Spanish. Danelo was like my little laptop and he would help and translate for me. After that we did language and then science and music.  I understood some of what we were doing, but not all of it.  It was kind of cool.

At recess, the kids asked me a bunch of questions too. I didn’t understand everything they said, so I kept saying either I’m Sorry or I don’t know (lo siento or no se). I didn’t have a snack, so my new friends shared theirs with me. I had a chocolate covered crackers and a yogurt thingy. It was ok, not super good. I was so excited I made new friends (Ilu, Paula, Paula, Alejandra, Rosa, Enere, Judith). At recess we played Pia Pia and that was new for me, but fun. It was kind of like tag.

When it was time to go home, some of my friends went to “after school”, some went to the bus and I walked out of the building to find my parents.  I was so excited to finish my first day of school.  I felt so excited that I did a full day of school in Spanish.  I really wanted to make sure my parents got all of my supplies and books, so I would have them for the next day. I loved my first day of school. It was fun because I met so many friends. They were all very nice to me even though I didn’t always know what they were saying.  The next day of school my teacher moved everyone around and he had Danelo sit next to me, in case I needed help in English. So that was helpful.

2 thoughts on “About my first day of school”