I guess you have figured out that I like to plan, or at least appear that I am planning.  Truth be told, I am really a “Go with the Flow” kind of person, but with researched options at the ready to help our Morocco itinerary 7 days. 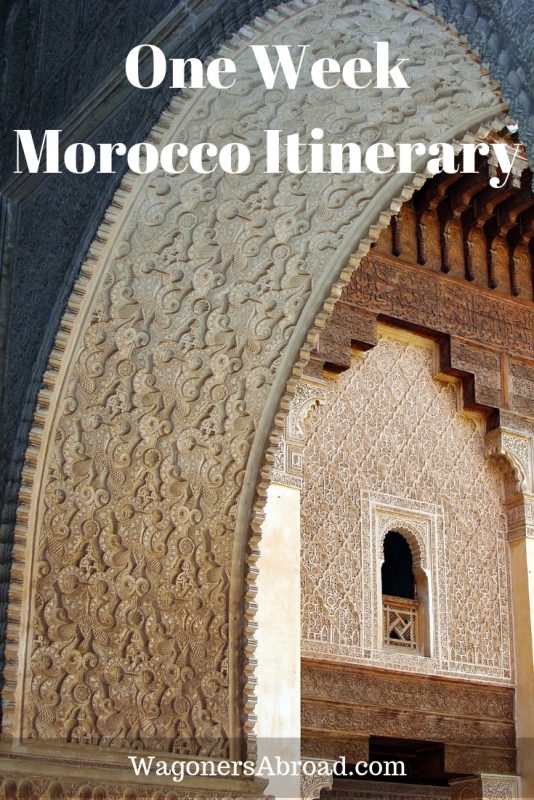 I do find it enjoyable to research all of our options and see what trouble we can get into, as well as duration and costs in advance.  That is about where my planning usually stops.  I over research and we don’t usually partake in half of what I have researched.  This is our one week Morocco itinerary for a family of four and a few gotcha’s! 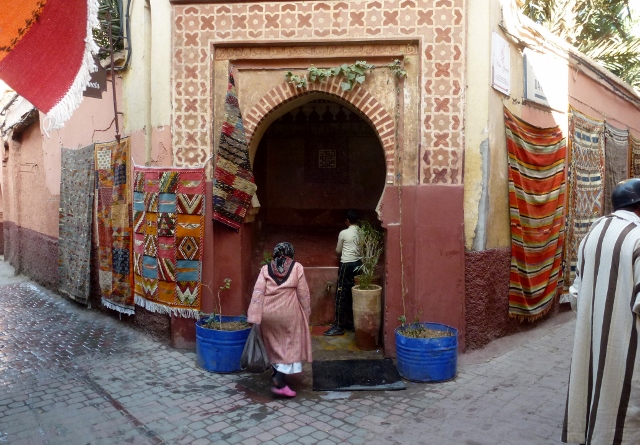 Water Fountain in Marrakech Medina near our Riad

I don’t function well with a schedule and having every moment planned.  I come with my Armor of Researched Choices and throw out suggestions when the need arises.  For the Wagoner Family, that is usually first thing in the morning.  I take a temperature check on the family’s mood, tiredness, and gauge how much energy we may be able to expend, how much walking can we endure, etc.  Sometimes there is no choice and we just battle it out, usually with me getting after Anya to hurry up.

What to do for 7 days in Morocco

All of that said, with 7 days in Morocco, I needed to have a rough plan in advance so we could do the things we all wanted to do.  One of those things was to take a camel trek and go camping in the Sahara desert.  So the entire trip was organized around this one event.  I scored crazy cheap flights on Ryanair from Seville to Marrakech for €35 each round-trip.  Not too bad to get from Spain to Morocco.  The ferry was about €60 each and that only dropped us in Tangier (Northern Morocco).  So, that dictated the dates and duration of our Morocco experience, now I just had to fill in the blanks.

Not to worry, we are frantically writing away, to share all of our experiences with you.  We will review where we stayed and what we did, as well as tips and tricks on travel with kids.  For today, we will review our 1 week itinerary in Morocco.

The planned One Week Morocco Itinerary (Marrakech and more)

The items in Green were reserved in advance and everything else was to be planned on-the-fly.  We knew we wanted to do the Camel trek and Camping out of Merzouga and there is nothing close to it.

We flew in and out of Marrakech Morocco, though Google said it was about an 8-hour drive.  Through much research and reading blogs and forums, we figured it would be closer to a 10-hour drive.  We thought we would split that drive up, and just plan the “travel day” to and from on-the-fly.  When we were tired of driving, we would just find a place to sleep for the night.  Again the aim was to experience Marrakech and the desert.

This is the route we mapped out and it appeared to be pretty straight forward.  The part that is a bit deceiving is the route from Marrakech to Ouarzazate.  This was a journey over the High Atlas Mountains and we were warned the roads were zig-zag and are very narrow.  We understood this and felt it was worth the drive to get to our dream of camping in the desert.

Well the first 3 days were picture perfect.  We arrived about 8:30 pm and it was dark.  We rented a car from the airport, even though we didn’t plan to use it the first few days.  This was the more economical choice, as it was the same price to rent for a week or for 4 days.  Not to mention, this would help us avoid having to pay transport charges from the airport to the Medina.

We picked up the car and headed into the city.  Alan will share his experience on driving in a “budget car”, with no power steering, at night in Marrakech soon.  We found our parking lot outside of the Medina center and left our car there for a few days, near the Palais de la Bahia.  It was just €3 per day to park, so that worked out well for us.

We entered the Medina walls as directed, via the arch right next to Hammam Ziani.  Then we found or Riad (A  patio home or palace converted to bed and breakfast or hotel) and got settled in.  It was a wonderful 3 nights of the Morocco Itinerary at Riad Dar Limoun Amara.  The morning of our departure, we enjoying the included breakfast and were all packed up and ready to head to the desert.

While being served our Moroccan tea, Mohammad (our host) informed us that some other guest left early in the morning to drive to the desert and returned.  The road over the High Atlas mountains was closed.  There was no way to pass, due to the amount of snow that had fallen in the past 2 days.  Yes, it was raining in Marrakech for nearly 2 days and not once did it occur to me, “This means snow in the mountains!”.  Ugg! 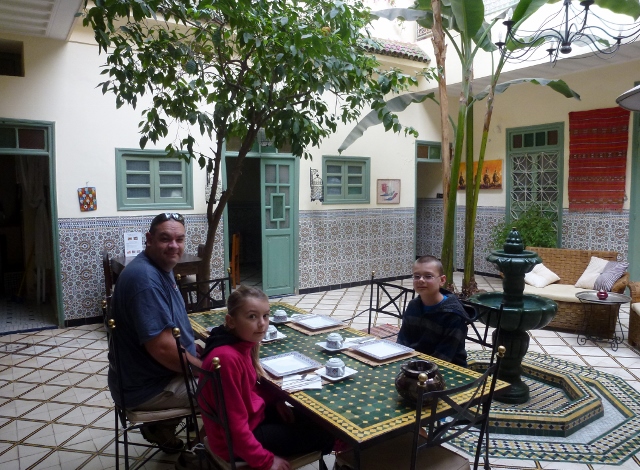 We spoke with the 4 Spanish guys, who attempted to make the journey and they confirmed it was closed.  We continued to enjoy our breakfast in the beautiful patio of our Riad and a little bit of disappointment struck me.  I am thinking, “Great!  The entire reason we are here is to go to the desert and we aren’t going to make it!”

Time to change the Morocco Itinerary to get away from snow

Alan and I discuss our options and realize that even if they open the roads the following day, it wouldn’t be in our best interest to make that journey.  We only had one day of cushion as a travel day each way and we weren’t willing to make the 10 hour journey, all in one shot, over snow-covered mountains, in a car with no power steering, or 4-wheel drive.

We didn’t get to go to the desert, but through friends, we do know how to get a cheap Sahara tour in Morocco for next time!

The Actual one week Morocco Itinerary

By 9:30 am we finished our breakfast, the kids played with the house cat, and I pulled out the laptop.  I almost didn’t bring it, so at this point I was thrilled that I did.  I spent about 40 minutes researching alternative plans, bouncing ideas off of Alan, and cancelling what we had already booked.

We could go south to Agadir, west to Essaouira, or north to Casablanca.  Thanks to all of that “over research” I did before we even departed, I knew there really wasn’t much to see in Casablanca, and Agadir was a very touristy British destination.  Several other bloggers had written about and recommended Essaouira, so poof a new plan was made. 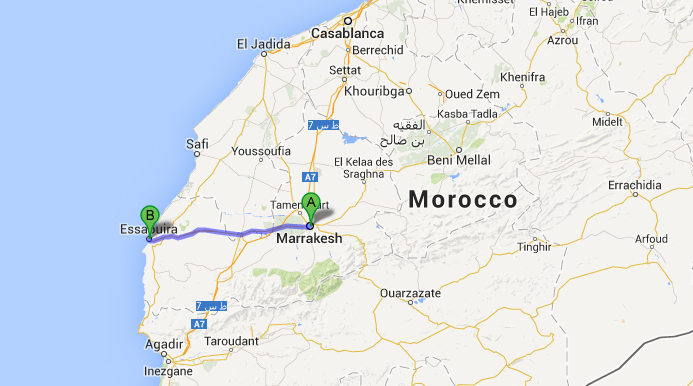 Road Trip in Morocco to the Beach!

By 10:30 am we were in our car and heading to our booked 2 bedroom 50 meters from the beach in Essaouira.  According to Google, the drive was going to be about 2 1/2 hours, so we were set.  We only booked one night in Essaouira, just in case we wanted to move the next day to another location.

Where did we stay in Essaouira?

We arrived at the apartment in the afternoon and it was very clean and spacious.  It was just a block from the beach and about a 10-minute walk to the Medina.  This was perfect for the night and we would explore to see if this was a town we could spend the remainder of our week or if we wanted to move on.

About 3 hours after arriving, the kids had some energy to burn and Alan was “burned” out from the stress of driving.  So the kids and I walked to the Medina and played on the beach.  Oh the sand here was wonderful and so compact it was great for running and playing.  It was great watching the waves crash against the rocks, doing a little tide pooling, and it wouldn’t be a normal day if we didn’t get wet shoes, while just running wild!

It’s a small world after all

It was dusk and getting a bit dark so we started our walk back to the apartment.  Again the kids went running along the beach and out of nowhere I thought I heard someone call out “Lars & Anya”.  That’s not possible, but it wasn’t Arabic or French, so it had to be their names.  Sure enough it was someone calling them!  It was Emily from OliverTheWorld!

For some reason the universe and mother nature put us together again and that is magical!  What a small world, a fellow traveling family on the same beach as us in Morocco.  We originally met up with them in October in Spain.  I knew they were spending a few months in Morocco, but didn’t try to meet up due to our tight schedule.  It was great catching up and I let her know our story and how we ended up at the beach.  We said good-bye, as I didn’t know if we were going to move the next day or stay in this town. 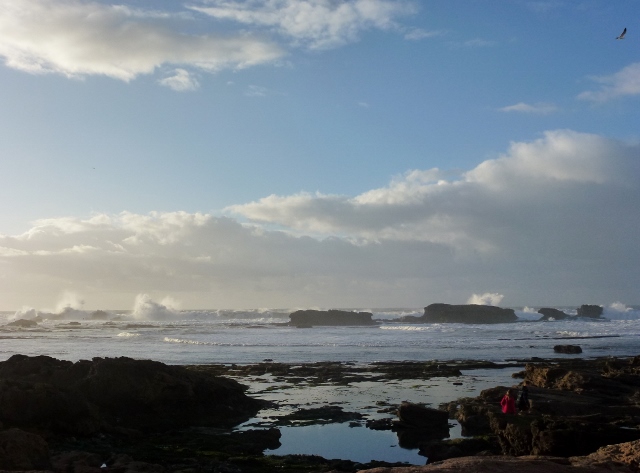 Should we stay or should we go?

After returning to the apartment, we took a family vote.  Basically, if you put the Wagoner Family near a beach, we aren’t going to want to leave.  So with that we all decided that we loved the beach and wanted to stay.  We all felt we should just stay here the remainder of the holiday and just soak it all up.  I was on the research path again, as if we were going to stay, I wanted to be in the Medina where all of the action was.  The next morning Lars and I walked in the Medina, found a Riad and an hour later we were all moved in for 2 nights.

For our last night in Morocco I booked a splurge hotel in advance.  My assumption was that we would be sore and exhausted from riding camels and days of driving, so I wanted to pamper us.  I booked a 5-star resort on the outskirts of town, so we could just relax before our journey home.  This was paid in advance with no cancellation, so of course we honored it and the pampering!  We will tell more later.  For now my fingers are cold and tired of typing.

As you can see we seem like we have a plan, but we can fly with the best when it comes to making something out of nothing!

Give us a bit to go through the 500+ photos, and we will write about all of our adventures.  Hey if there is something specific you are curious about, just ask and we will see if we can include in one of our posts.