When it comes to experiencing new things, we all have our favorites.  Alan and Anya are always up for a new adrenaline rush and if it looks like a thrill they are all over it.  I am always up for joining in with the locals and just being part of whatever local tradition is happening.  When it comes to trying new foods, Lars is the taste testing Man!  He loves to experience and taste new foods.  He is far more courageous than the rest of us, and an inspiration to get us to go beyond our food comfort zones.

After our recent trip to Colorful Morocco, I thought I would share just a few of the things that we sampled (mainly Lars). 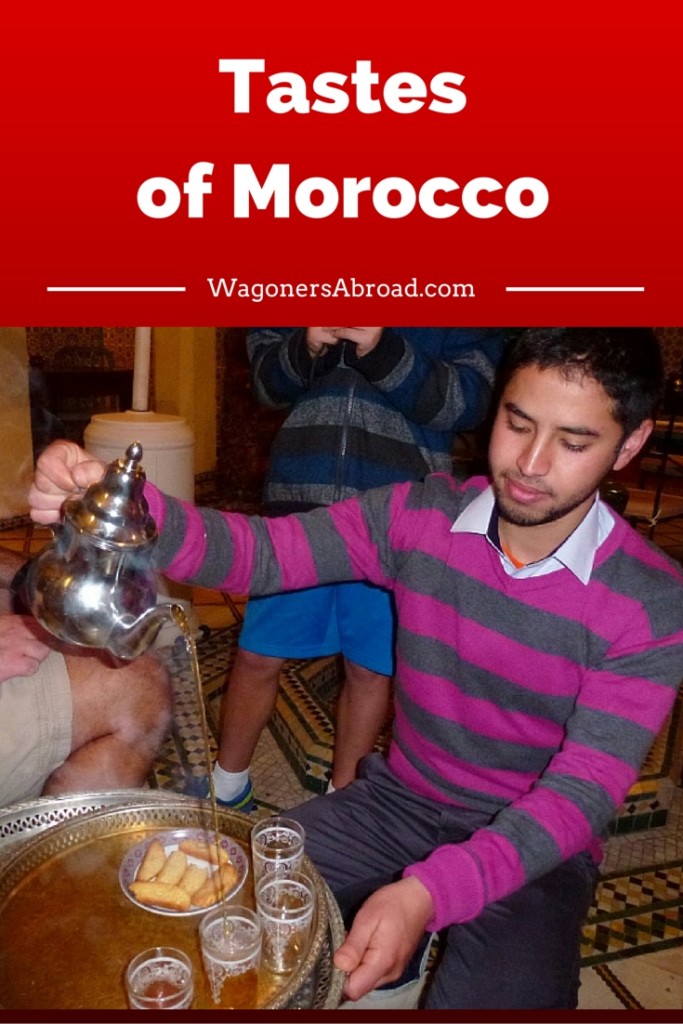 The entire family loves drinking tea, so I’m not sure why we don’t do it more often.  Prior to going to Morocco, we reached out to some fellow travelers and asked if there were any “don’t miss” items.  Talon, from 1Dad1Kid, recommended we partake in Moroccan tea.  This is an integral part of the Morocco culture, so we did just that!  Not only did we partake, Moroccan Tea became a daily routine.  We loved the tea service, and pouring it as high as we could, as well as just sitting in a cafe and people watching.  Luckily for us our Riad in Marrakech as well as our Riad in Essaouira, both served us tea each day.  I have to say, we did get our fill of tea while there.

The process for the made to order Moroccan tea infusion, is quite involved.  It isn’t our traditional process, to just plop in a tea bag and wait a few minutes.  They actually take each ingredient and make a special blend, like mint, freen tea, sage, or jasmine and really make the tea to order.  Then they add a ton and I mean a ton of sugar.

(Great!  Now I’m having a 1980’s flashback of Def Leppard singing “Pour some sugar on me”.  I wonder how long that will take to get out of my head today.)

They pour a cup of tea and then pour it back in the pot and do this a few times.  I think this ensures the sugar is dissolved and mixed.  At this point, it is ready to be served.  I am not usually one to put any sugar in my tea, but this was so fresh and tasty.  Anya wasn’t a huge fan of the tea, but she loved to be part of the process and always took a few sips.  Then either Alan and I scored her remaining tea, as a bonus.  Lars doesn’t like “germs”, thus never took Anya’s left over tea.  We did get a video of Lars serving the tea and the video is on Facebook. 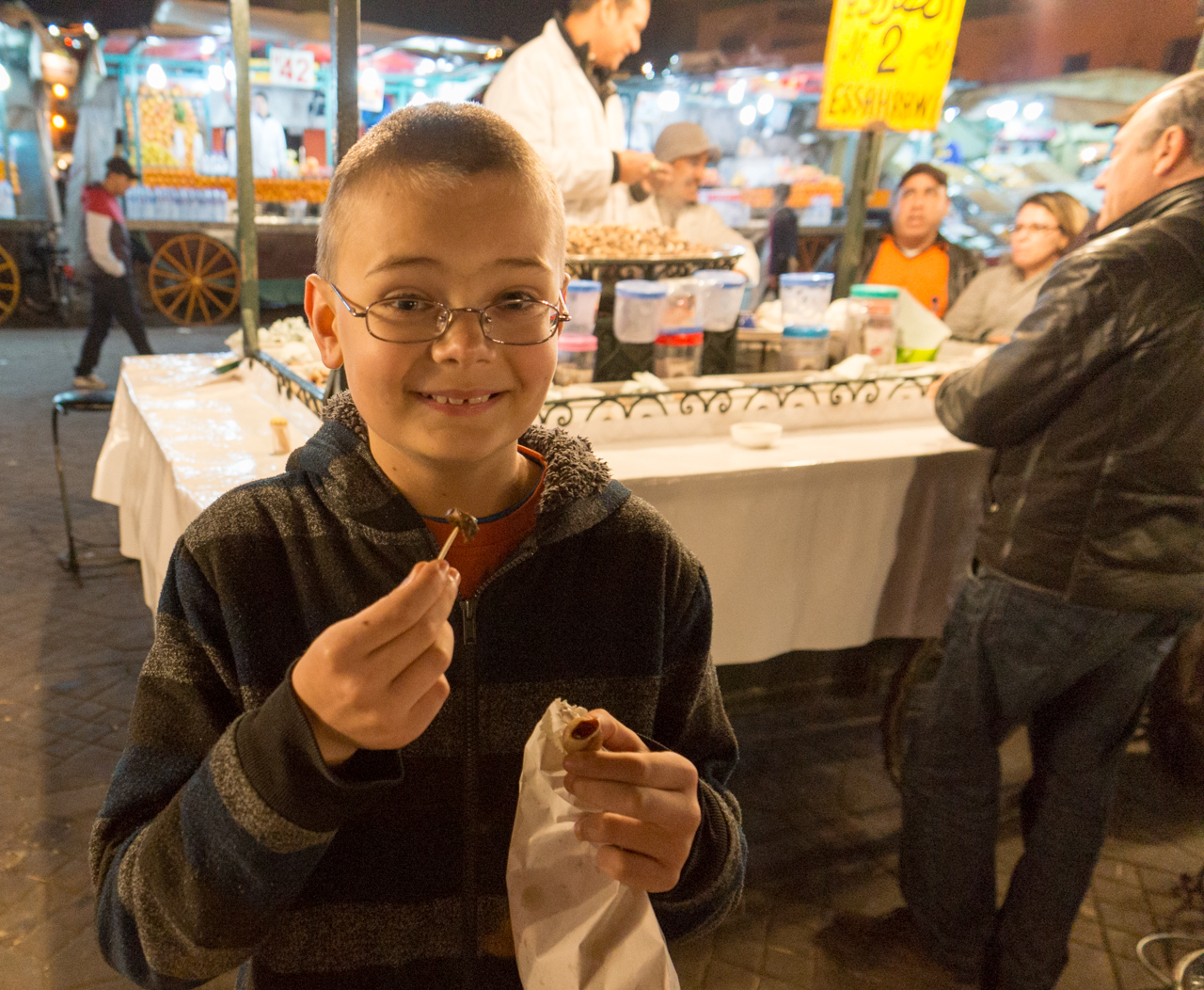 Taste of Morocco – Escargot at the night market in Marrakech

Alan wrote a bit more detail about our night in the Marrakech Medina and Lars eating the escargot in another post, but we had to include it here too.

Lars gave escargot a try the other night and tonight it was octopus in little balls.  It was a Japanese street stand with Takoyaki covered in clam sauce.  For many this isn’t any big deal, but it was a first for Lars.  This was actually a traditional Japanese dish, made by a street vendor in Essaouira.  How’s that for a multicultural experience?

(Takoyaki is a ball-shaped Japanese snack made of a wheat flour-based batter and cooked in a special takoyaki pan.  It is typically filled with minced or diced octopus, tempura scraps, pickled ginger, and green onion)

We were walking along the Medina in Essaouira and loved seeing all of the fresh fruit and souks of all kinds.  There were 2 guys opening up a fruit and eating it like a Popsicle, so we just had to check it out.  Turns out it was Prickly pear and this was a new fruit for us to taste.  The guy cut all the way around the fruit, popped off the top, and squeezed the fruit up.  Lars was first to give it a try and then another for Anya.  The kids enjoyed it, but there were big seeds inside they weren’t too fond of.  The funny part was they both had very red lips for the rest of the day.  I guess this would be a good form of natural lipstick.

Everywhere you looked, there was a little pastry shop with yummy pastries on display.  While these weren’t so unique, they were delicious.  Many of the pastries were unfamiliar to us and there were no labels so we don’t know what they are called, but we just had to try them.  Many were similar to a dense baklava and drenched in honey.  Tasty and messy!

Of course we could never go wrong with crepes.  In Essaouira, this became our daily breakfast. There was a little shop just down from our Riad and for a total of 60 dirham we all had breakfast (that’s about $6.75 or €5).  We would order them up and return to our Raid roof terrace to enjoy the taste, sights and sounds.  Later that night, when walking around the Medina, we even happened upon a cotton candy maker! 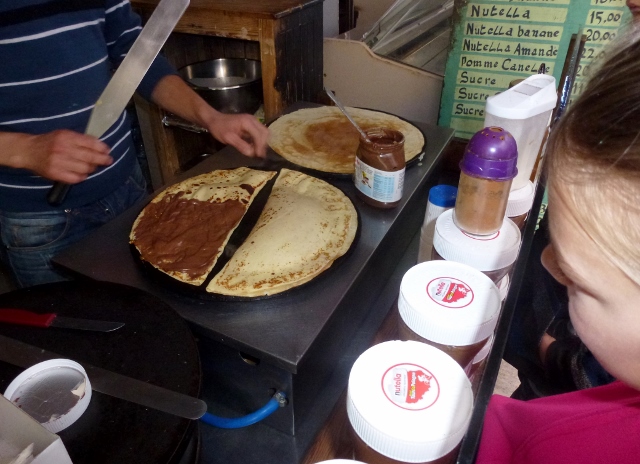 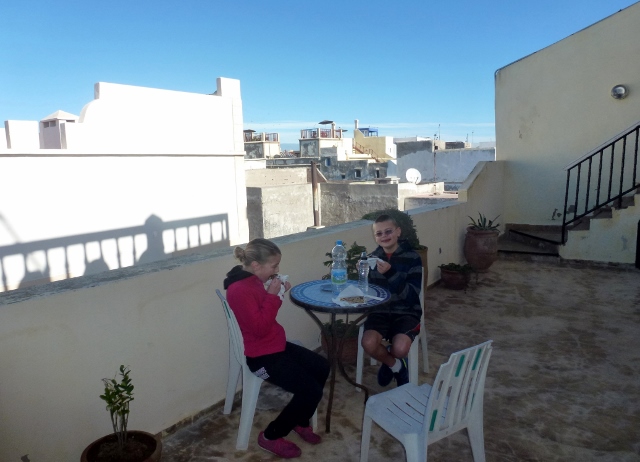 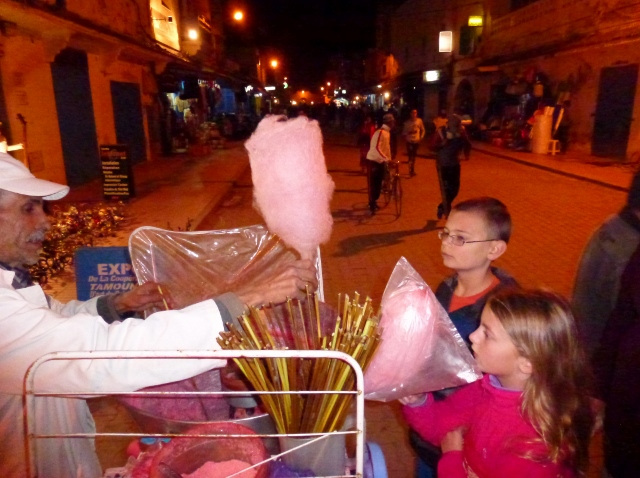 Looks like we are starting a new Wagoner trend, “tasting foods around the world”.   I think we will try to capture the moment and share with you too!   Share the strange foods you have tried with us in the comments below.