So…Where to begin?  I am probably the least qualified to write this post.  Why?  Well, it’s about food, and as you know, I’m the least Foodie person here at Wagoners Abroad.  I’m more of a Meat & Potatoes kind of guy, so when Heidi told me that we were going to do a cooking class while in Morocco, the conversation went something like this: 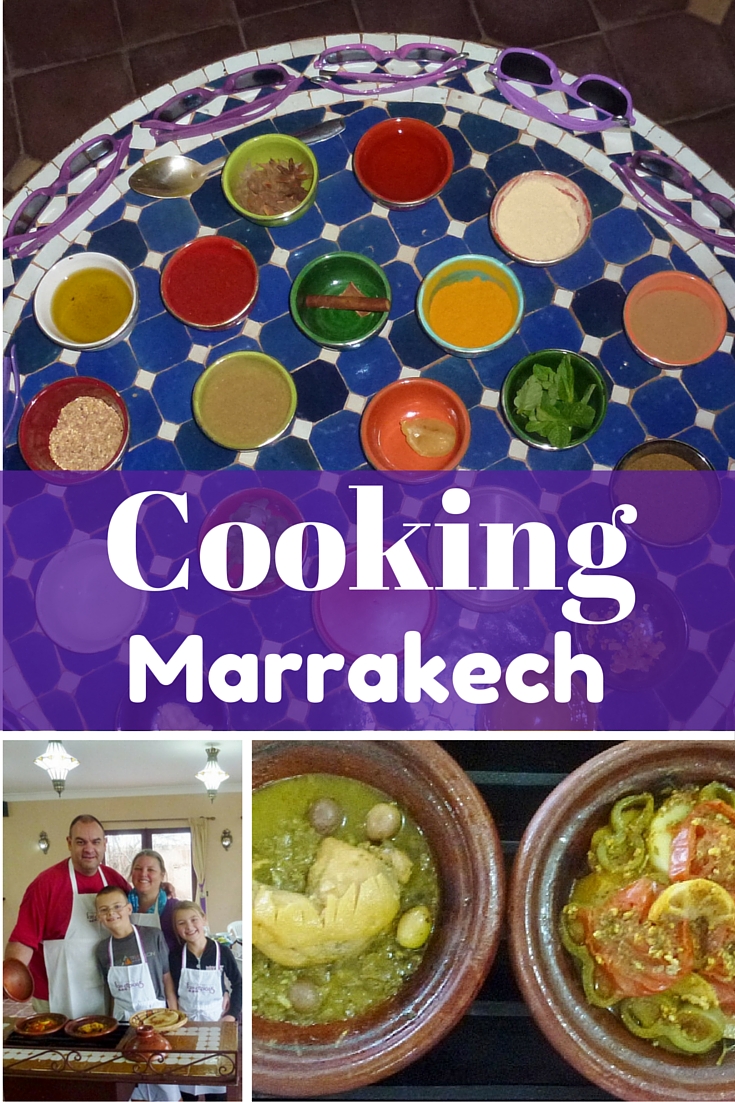 ALAN:  What do you mean we’re doing a cooking class?
HEIDI:  We’re going to learn how to cook a typical Moroccan meal.  In a tajine!
ALAN:  In a tangerine?!
HEIDI:  No…a TAJINE!  It will be fun.
ALAN:  OK.  I’ll stay and watch the kids while you do your tangerine cooking.  (That’s just me trying to get under Heidi’s skin…)
HEIDI:  No.  All of us are cooking.
ALAN:  What do you mean ‘All of us’?  What are the kids going to be doing?
HEIDI:  Cooking.  They’re going to be cooking with us. It will be fun.
ALAN:  (In my not-so-excited voice)  Yeah…it will be fun…

That about sums up what my thoughts were on this whole cooking thing.  I guess I can be a big critic when it comes to food, or doing food things.  Come to think of it, I’m probably the most qualified person to do a post!

Well, if you’re the type of reader who wants me to just get to the point, here you go:

Cooking in Marrakech with Faim d’Epices was awesome! 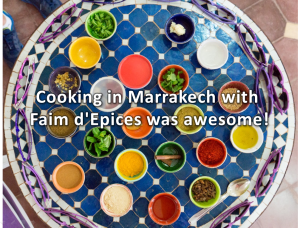 If you want the juicy (get it?) details, keep on reading.  We were staying in the Medina in Marrakesh (inside the old walled part of town), and a van picked us up along with a number of other passengers.  After a 30 minute ride, we were at the facility. I’m not sure what I was expecting, but there were a dozen or so cooking stations in the back of this big room.  At the front of the room where some nice seats with pillows, and our host, Michel, asking us if we wanted Tea or Coffee.

A few words about Michel:  He’s a Parisian transplant who has moved to Morocco, and is sharing his love of Moroccan spices, food, and cooking.  He’s got a great sense of humor, and he was a fantastic host!

We lucked out, as all of the other “students” were very cool, easy-going people.  We met a two sisters from the U.S., people from Ireland, England, and Italy.  It was a well-rounded group of travel and food enthusiasts.  Basically, it was a great group of folks. Once we’d enjoyed our drinks, it was time to get down to business.

Michel asked us to sit around a table that had twenty or so small bowls of spices.  He set up a smell test game, but the catch was that you had to wear blacked-out sunglasses.  I should point out that these were not ordinary sunglasses either.  You see, Michel  adores the color lavender.  It’s everywhere.  Even the glasses, with the blacked-out lenses.

So with our hip shades on, we could smell, but not see the spices he would hold under our noses. Since I’m not the most experienced in the ways of cooking, I knew I was going to be awful at this game.  I said everything smelled like Coriander, even when I knew it wasn’t Coriander.  It became the running joke.

Michel explained about all of the spices and flavors that are used in Moroccan cooking. I had no idea that it was so involved.  He provided some very keen insight into telling the fakes from the frauds as well. For example, Michel told is how to differentiate between real and fake argan oil.  I didn’t even know what this stuff was before the class, but it’s a rare oil that’s made from trees that are only in a certain section of Morocco.  It’s used in foods, and cosmetics, and it can be very expensive, so it’s best to buy the real stuff, and not the common counterfeit.  It’s things like this that made this experience, more than just a cooking class.  It was full of bits about the culture and history as well. 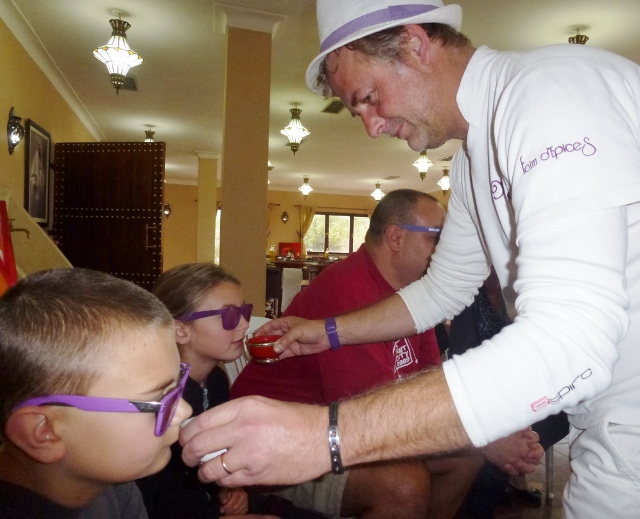 As you have probably guessed, I didn’t do so well on the Guess the Spice game.  Let’s say I was on the left side of the bell curve.  Way left.  It’s OK though, because we all had a good time. During our quiz, the cooking stations were being outfitted with the various spices, vegetables, and other supplies, and the burners were going.  We were about to cook!  And of course, you can’t cook without an apron, so we all donned our aprons, and went to our various cooking stations.

Lars and I decided to cook the fish, and Heidi and Anya chose the chicken. I was worried about the kids in such an environment (sharp knives, hot burners, etc.), but the way the stations were setup, it was very kid safe and they even provided a lower station for the kids.  The stations were circled around our Instructor, Nezha.  Our first item to make was bread.  The bread here, called Batbout, is very hearty, and it gets a burned kind of outer shell which I just love.  And with only 5 ingredients, even I couldn’t screw it up. 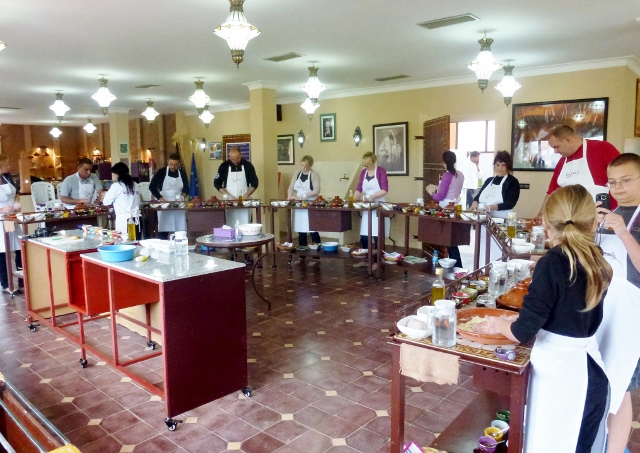 Nezha showed us the proper mixture, and the technique to knead and stretch.  It was apparent that she’s made a lot of bread in her lifetime.  She would definitely get a gold medal if bread-making becomes an Olympic sport.  With all of the boxing (kneading) and stretching completed, it was time to actually form the dough into its final shape before cooking.  It was more complicated than it looked getting the dough into the right shape and thickness.  Anya got top of the class for her form and perfectly shaped bread! 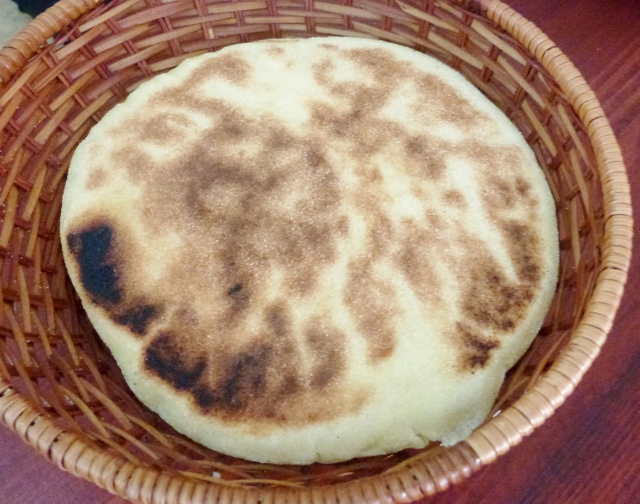 Time for the main dish

With that, we covered the dough to let it rise. Now that we’d literally gotten our hands wet, we were all ready to start making the main dish of our meal.  Nezha had so much patience with us pointing out what spice we were supposed to be using, and how we were to mix things together.  She in combination with Michel walking around to assist, provided enough help for us to feel like we were actually doing it without feeling lost.

As I wrote earlier, the main meal was going to be cooked in a tajine (pronounced tah-ZHEEN).  It’s named after a type of Berber earthenware in which it’s cooked.  It looks a bit like a small paella pan with ceramic teepee.  With our marinade made, it was time to put it all together.  The dish is made in layers.  The bottom one being the celery followed by the carrots.  On top of that goes the fish, with a bit of our sauce, then the potatoes, tomatoes, and a lemon on top.  Some water to go around the perimeter, and that’s it.  The lids were put on, the burners lit, and it was time to take a well-earned break. 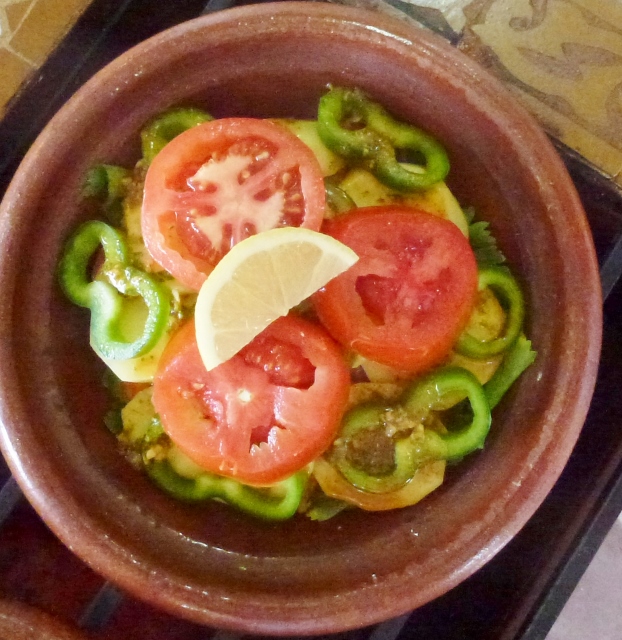 All of sudden, I heard a loud noise, and the ground shook.  OK, it was just my stomach growling.  No real earth-shaking took place.  It turns out, that there were a few of us who were hungry.  And of course, Michel had something in mind to take the edge off of our hunger.  The party music went on and we were all dancing. Michel was playing the drums and this just turned into a family party.  We moved to another section of the room, and watched Nezha made some side dishes:  eggplant salad (Zaalouk), Moroccan Salad, and bread (Batbout).  Just watching her cook the bread brought back memories of my grandmother making tortillas when I was a kid.  Plus the smell made the room a very cozy place to be. 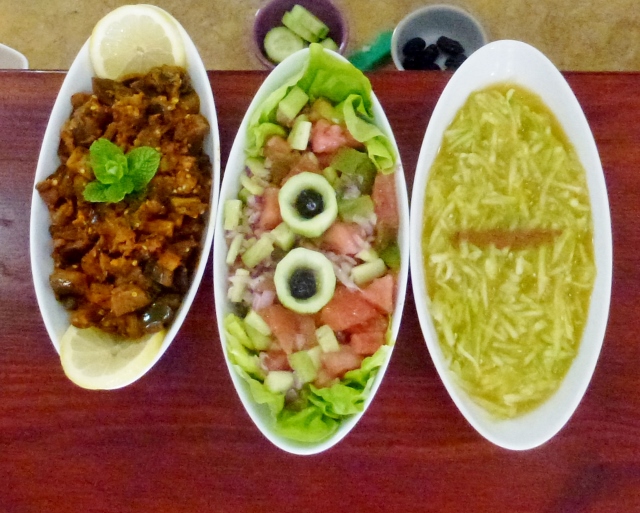 Our snack was a mixture of nuts and dried fruit with some fresh squeezed juice.  Yum. After Nezha was finished with the salads, it was time to eat the bread.  When the bread was ready, we dipped it into the olive oil, and it was amazing!  There is nothing like warm bread to help keep the Hunger Monster at bay.  With all the bread consumed (I could have had seconds and thirds), it was time for us to finish making our own bread.

Throughout the day, I would look outside at the weather, and it was very rainy and dreary.  But that’s totally OK, because we’re all inside cooking and having a very enjoyable time.  When we uncovered our dough, it had risen about an inch.  We temporarily removed our tajines from the burner and used an aluminum pan for the bread.  It’s very simple to make, and all of us did our best to get a beautiful (and tasty) crust.

Unfortunately it wasn’t time to eat the bread yet (shoot!), but we watched Nezha make a traditional Moroccan sweet dish.  We saw them referred to as Moroccan crepes, but their called Msemen.  Once again, Nezha was amazing in how fast she could crank out the food.  When they were all cooked, we all sampled the deliciousness with some of Michel’s homemade prickly pear jam. 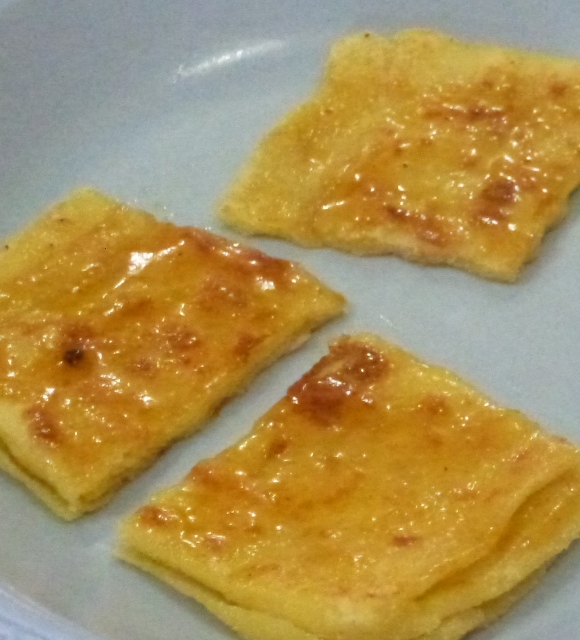 With our meals about ready, Michel and staff were arranging tables and getting the place settings arranged.  The room was filled with glorious smells, and we were about to eat the very food we made.  And it was finally time to eat!  Before we all dug in, we said the Moroccan equivalent of “good health”, and started to eat. 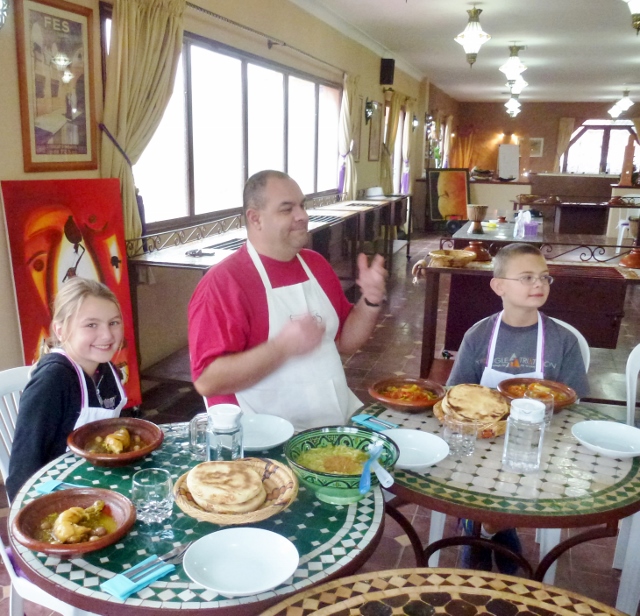 How was it?  It was fantastic.  I’m not a chef type, but it was a very rewarding experience.  Normally, I wouldn’t have touched a meal made in a tajine.  I’m just not that experimental.  But since I knew what all the ingredients were, and how the dishes were prepared, I tried everything.  Yes…everything, even the eggplant and that’s not like me is it?

After a great meal, we retired to the couch area, and had tea and coffee, and talked about travel and culture with our fellow students.  It was a nice wind up to a full day of cooking and eating.  With that, we said our goodbyes, and got back into the van back to our place in the Medina.  Definitely the highlight of the trip for me! 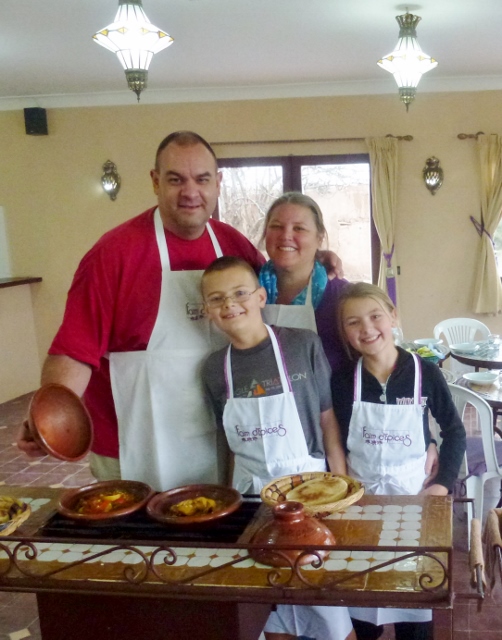 The hospitality and event provided by Michel and the crew at Faim d’Epices was amazing.  Even if you are not big into food, this is something that anyone can and should do.  It’s a family friendly experience that allowed the kids to make their own meal, and exposed them to a cultural aspect of Morocco that we wouldn’t normally have.

You will have a fun time with cooking, music and great food.  The experience from pick up to drop off runs from about 9:30 – 4:30.  They also offer combo packages with Hammam and massages following the cooking class. 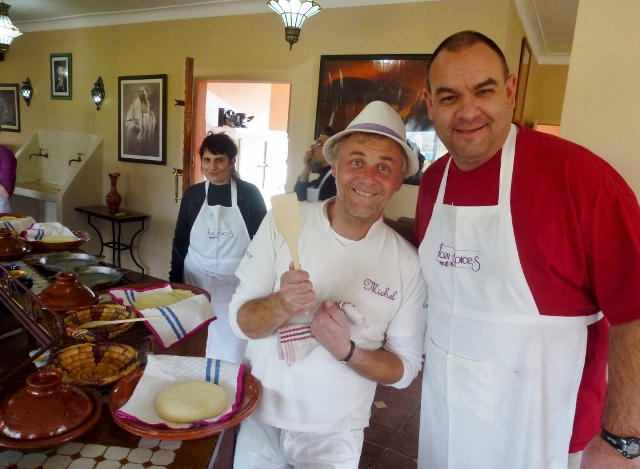 Our experience was sponsored by Faim d’Epices.
This review is our honest personal opinion from our experience.