With our trip to Morocco in the books, I figured I would do a post on what it was like to drive in the country.  Since I’m writing this, and you’re reading it, it’s obvious to say, “We survived!“.  Obeying the “Rules of the Road” was a bit difficult at times, as it didn’t appear that there were any rules at all! 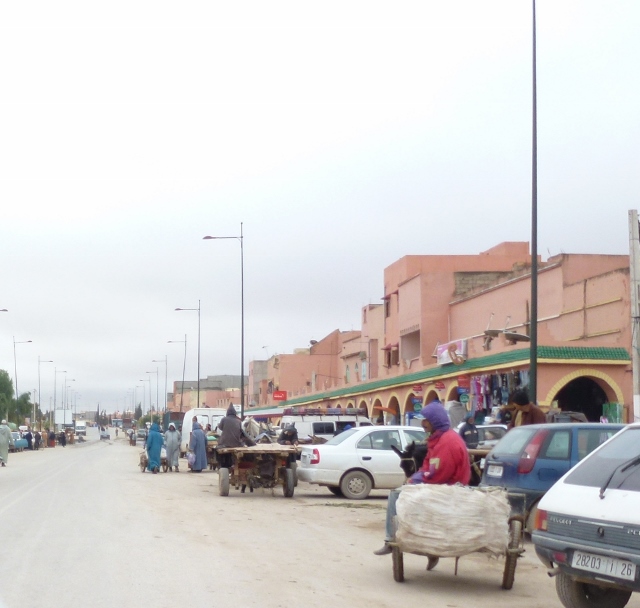 I suppose it’s better to start at the beginning, so let’s begin shall we?  Heidi had us squared away by getting a great deal on a rental.  Once we landed in Marrakech, we just needed to find the kiosk/person in order to get our car.  As we’re walking around the airport, I see a guy holding a sign that looks a bit familiar:

Oh yeah.  V.I.P.  That’s how we roll at Wagoners Abroad!  Who cares if my name isn’t spelled exactly correct.  I’m sure Bono or Kobe experience the same thing from time to time.  With the car representative found, we exited the airport, and found our car way out in the dark parking lot.  Luckily it wasn’t one of those “micro” cars.  The headroom looked adequate, and it had 4 doors, so we’re off to a good start.  It’s a budget model car, but I was expecting it.  (That’s really how we roll at Wagoners Abroad.)

As we’re working through the paperwork (on the trunk of the car), the kids are getting anxious.  Heidi tells them to get in the car, and the kids noticed a slight technology problem with the car.  The windows were manual!  Not exactly a deal breaker, and not exactly a surprise, but it definitely threw the kids for a loop.  They weren’t raised with this “old fashioned” technology.  On closer inspection, it turns out that the car is a Dacia Logan.  To my knowledge, this Romanian technology has not been imported into the US as yet, but it’s definitely missing some of the “creature comforts” to which we’re accustomed.

I’m doing the typical “walk around” to make sure there’s no gaping holes, or serious dents, and I notice that the passenger lock looks odd.  I poke at it, and it comes out.  Not completely out, but the lock just hangs there.  OK…good to know.  I put it back in the hole as best I can, and with the last paper initialled, we are ready to be on our way!

Turn on the engine (it starts!), and I’m backing up, and I notice that it is seriously difficult to turn the wheel.  What is going on!?  It turns out that power steering is considered a luxury, and our rental was absent this key technology.

Rant:  I understand the need to cut costs.  Cigarette lighters, floor mats, and power windows can be expensive to engineer and design in an automobile, but to leave out a steering pump is really cutting corners.  Come on!  Power steering technology has been around for over 100 years!

Now that I’ve provided you a sense of the capabilities of our particular car, let’s talk about the actual driving experience.  In a word, “semi-controlled mayhem”.  I know that’s technically two, but using just the word mayhem would have been too strong.  To give you an idea of what it’s like, imagine you’re driving on a four lane road.  Two lanes for each direction with a well-defined solid line in the middle.  You have your hands at “10 and 2”, and you’re in the inside lane.  Your calm is disrupted because somebody is passing.  On the left and on the right!  Pretty crazy, huh? Now layer all of that with it being close to 9:30 pm, dark outside, with dimly lit roads and you have a very fun combo.

The other thing that adds to the frenetic pace of driving is that not only do you have to contend with cars and scooters, but also horse pulled carriages, and donkeys pulling carts.  Donkeys are not something that I’m used to seeing when I’m driving in the city.  You may even have the odd sheep or goat hop out in the road.  And the pedestrians are another big variable.

There are those pedestrians that are concerned about their life and limb, and then others, who don’t really seem to give a crap.  That lack of concern is manifested by just walking into traffic.  No look.  No stop.  Just the belief that the big guy upstairs will somehow handle it.  I was one of those rare drivers who actually stopped for pedestrians at the crosswalks, and the looks of amazement I received were pretty funny.

At some point though, my need for following the law went out the window.  (My need for following the laws of driving aren’t very strong anyway.)  I just pretty much drove the way other drivers did.  Passing a carriage on the left into oncoming traffic with a solid double line?  Done!  Not signalling for a turn?  I didn’t want to waste my time with that anyway.  There were a few times that were a bit hairy, but it’s not like I was driving a Ferrari or anything.  I will say that Heidi was a good sport with all of this, as she was my copilot, but she did let out a few gasps here and there.

I did wind up getting a speeding ticket on our drive from Marrakech to Essaouira.  I was doing 68 kph in a 60.  That’s like 5 mph over the limit.  Pretty weak, I know, but they had me on the laser, and it was only 300 dirhams (about $36).  Hey, if $36 will keep me out of a Moroccan jail, I consider it money well spent.

Would I recommend driving in Morocco?  I would say it’s not for the timid driver.  You need to be confident in your driving abilities, otherwise it would be very stressful.  We didn’t do as much driving as anticipated with the inclement weather, but overall I was pleased with the driving experience.

Sorry, we didn’t have any photos of driving in the city.  Heidi was too busy closing her eyes and clutching the door handle to get out the camera.