We have been camping on the Thun Lake while staying in Interlaken Switzerland, and it has been very relaxing.  To break up the long, strenuous bouts of relaxation, we decided to take a trip to Niederhorn.

The Niederhorn is the top of a mountain in the Alps, and has an elevation of 6440 feet [1963 meters], and the views of Interlaken Switzerland are nothing short of amazing! 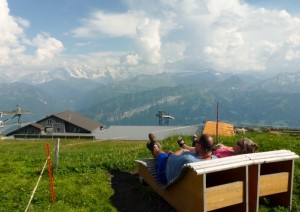 As usual, the biggest concern was trying to find the place.  Since Niederhorn is on the same lake on which we are camping, it’s really just a matter of getting in our car, and turning left out of the parking lot.  Even I can handle that.  The downside is that it’s a winding road.

A quick trip from Interlaken Switzerland

After a short 15 minute drive, we find the spot, buy our tickets, and we’re off!  The first leg of the trip is on a funicular or cliff railway.  While it’s a bit spooky being in a big metal box on the side of a steep hill, it beats walking.  The funicular takes us about a third of the way up the mountain.  We stop at Beatenberg Station, and after that, we take a gondola lift the rest of the way. 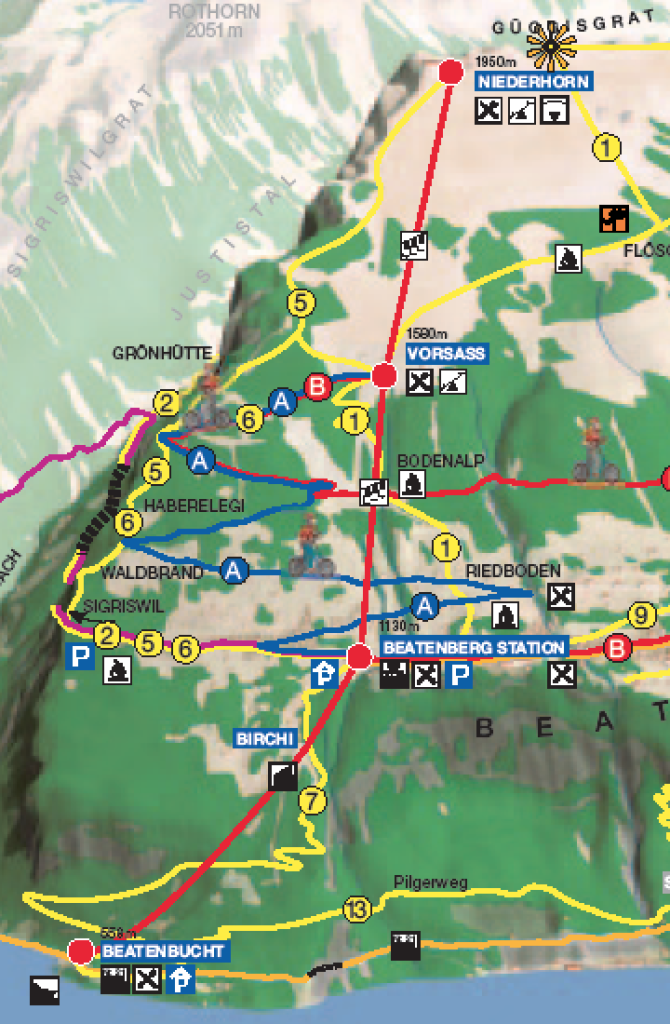 On our way up, there are many hiking trails, and the mountain slopes look like they would make for some nice skiing.  Two-thirds of the way up, there is a brief stop at Vorsass Station, and we see some people unloading a bunch of dirt scooters.  I’m thinking that riding scooters down would be cool, until my mind goes to the Dark Place, and I see myself either flying off a cliff, or running out of control, and smashing into a tree.  We bought round-trip tickets anyway.

Once at the top, there are more paths snaking around.  I do see this big fella, and the first thing that comes to mind is, “Can you hear me now?” 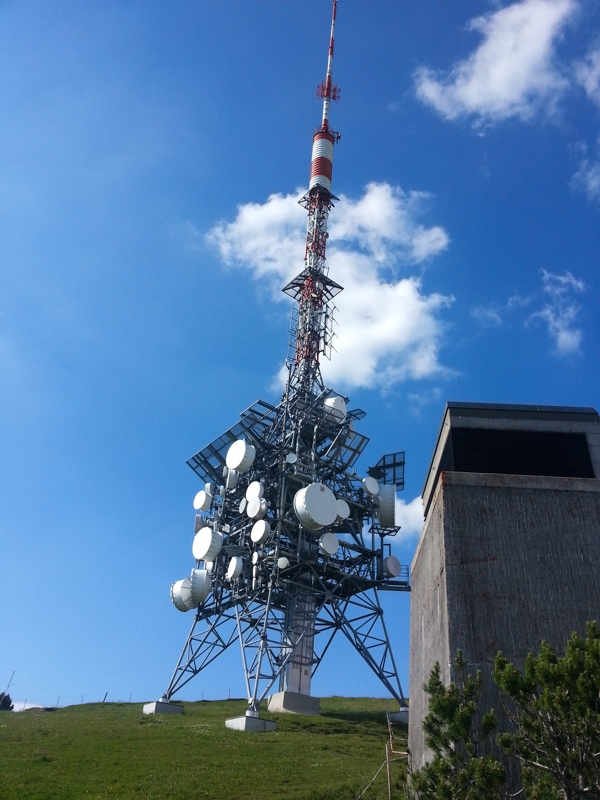 We still have about 100 feet until we’re at the top, and you just have to go to the top, right?  One of the interesting things we notice is that there are a bunch of cows snacking on the world famous Niederhorn Grass, and to keep them contained, there are electric fences all over the place.  Not Jurassic Park kind of electric fences, but simple ones.  These are cows after all, and not blood-thirsty, meat-eating dinosaurs.

We make our way up to the top, and WOW!  It’s gorgeous!  I forgot to bring my camera, so this panoramic is taken with my phone, but it was spectacular to say the least.

While we were at the top, I saw a guy taking pictures of an animal.  Based on his slow body movement, I figured it was wild, so we moved around so as not to startle it.  It was a wild goat!  I took a few pictures, but wound up spooking it, and it took off between two fence posts.  And it didn’t give a damn that it was walking on the side of a cliff. 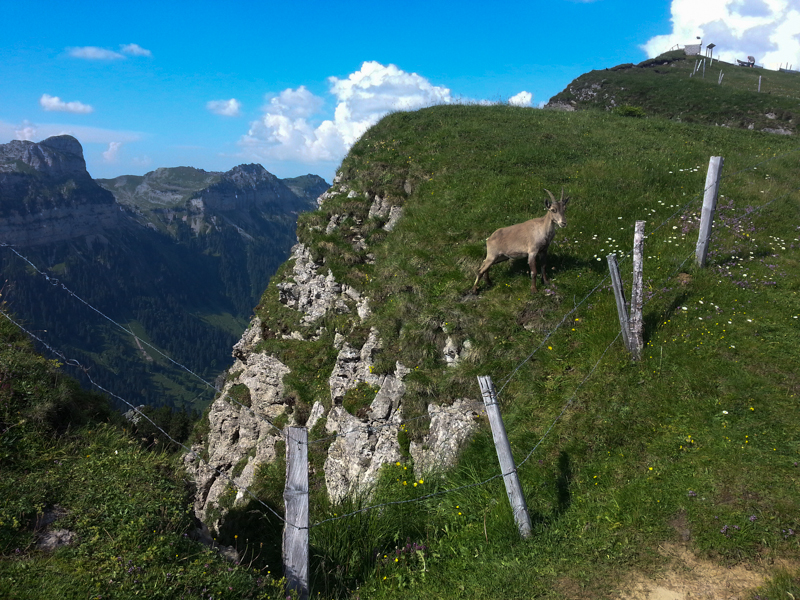 We continued to enjoy the views when I spotted some interesting looking chairs, but they were surrounded by the electrified fence.  Luckily, there was no power to the fencing surrounding the chairs, so I stepped over and relaxed.  Ahhhhh.  Of course, I told Heidi that it was a “live” fence with 50,000 volts.  I managed to grab a pic of her before she carefully stepped over.  (That green tape is the fence.) 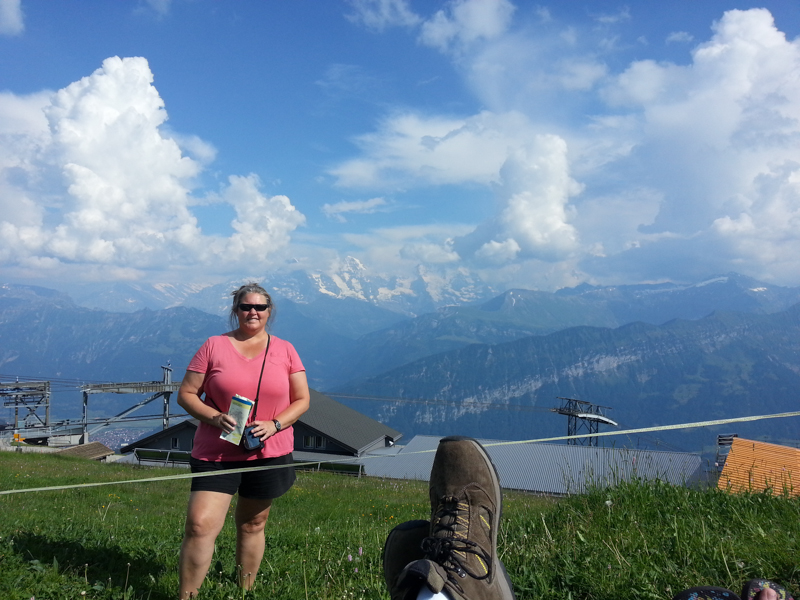 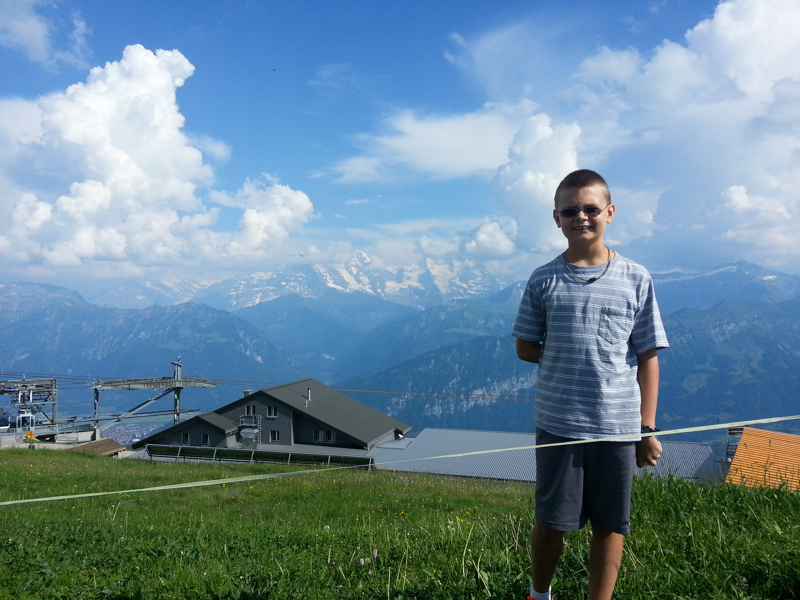 And Heidi and I hold hands and just relax.  Here’s a pic caught in mid-relax: 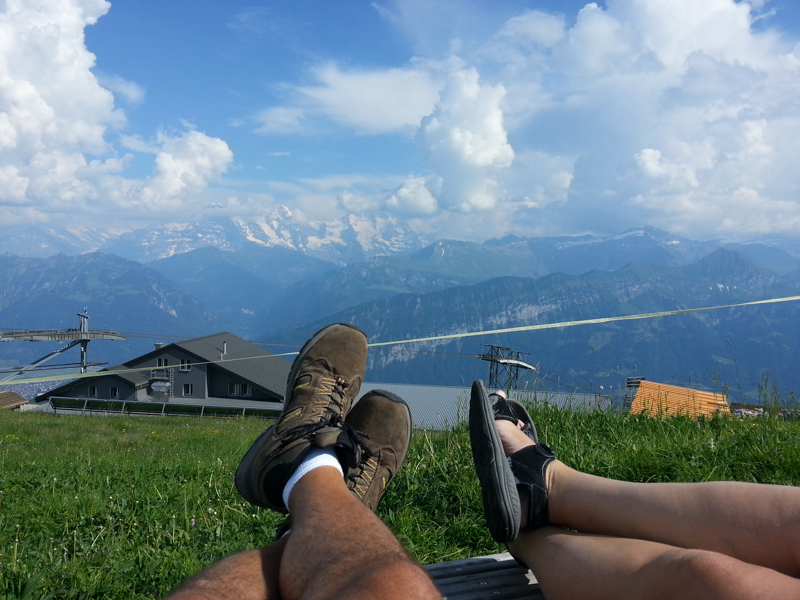 It’s starting to get close to the time when the last gondola/tram heads down the hill, and I don’t want to miss that, ’cause I’m sure as hell not walking down.  This go around, Heidi and I take one gondola, and the kids take a separate one so they can be loud and have more fun.  At the bottom, we regroup, and make our way back to the car and campsite.

Overall, it was a great little excursion to break up our camping in Interlaken.