Time to get up close and personal with a few more animals.  This time we got to feed the hungry hungry hippo at the Chiang Mai Zoo and Aquarium.   It is about a mile from our house, so early one morning we walked over and checked it out.  Upon arrival, it was nice to see the beautiful and lush jungle surroundings. 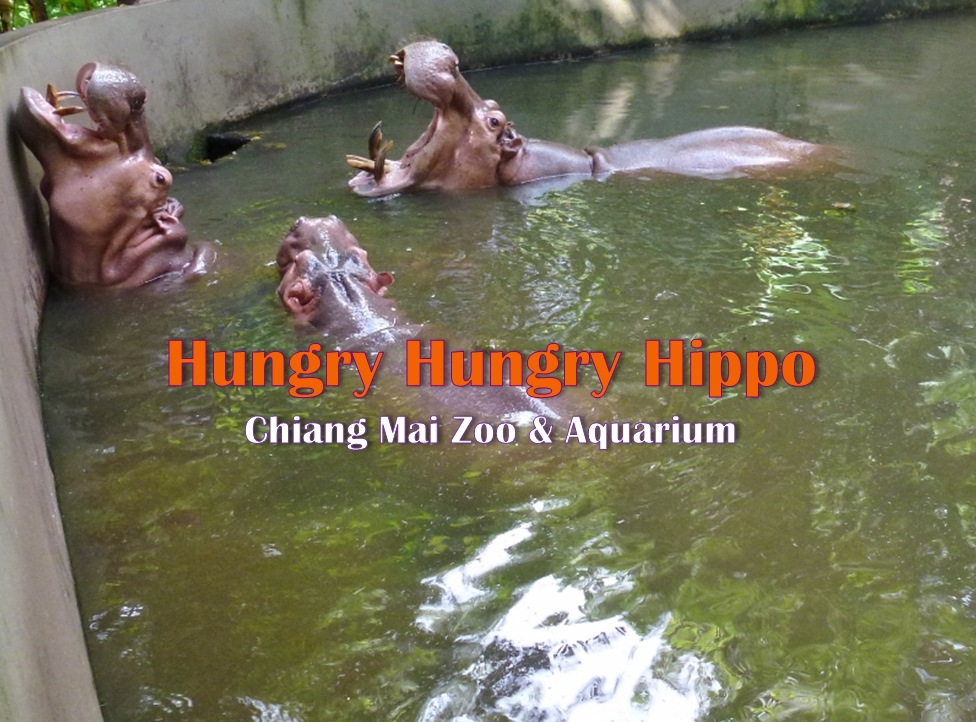 This zoo is built into the base of Doi Suthep and is organized for you to follow a loop up and around.  As you meander through the zoo you slowly wind your way up the mountain, with many stops along the way. 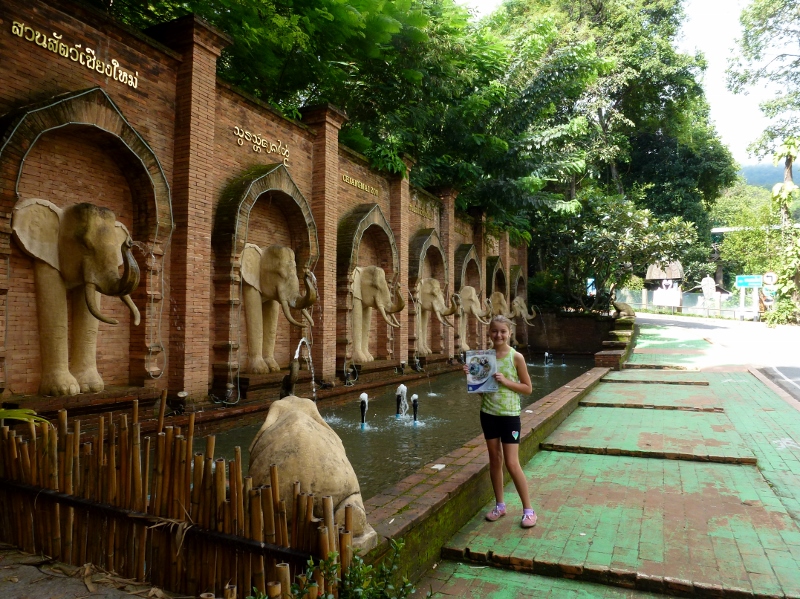 For us first stop was Africa!  I checked the feeding schedules online and knew they fed the giraffes at 9:30, so that is what we came to see.  When searching for the giraffes, we happened upon the hippos!

There were four of them in a water pit and we were up close and personal with them.  I am certain, we could have just reached over and touched them.  Bells start to go off “this zoo experience may be like no other we have had in the past”.  The rules and guidelines are likely to be a little more lax than we are accustomed to in the USA.

The hippos made their way over to the wall near us and opened their mouths.  Those teeth were massive and looked like they needed a good clean and polish.

Wow!  What a sight, looking right down the throat of a big hippo. 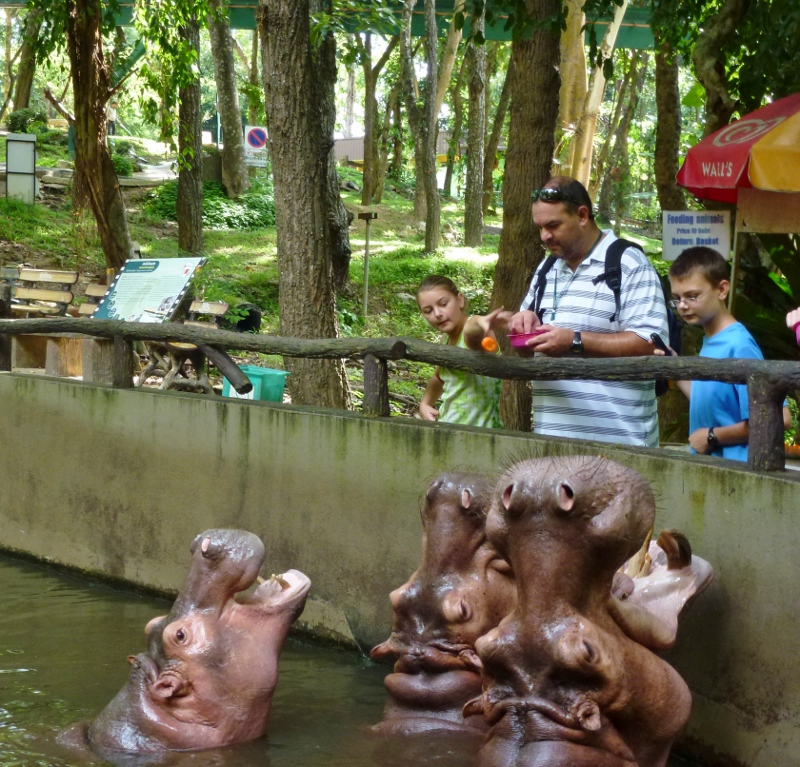 Moments later a man arrived, manning the empty booth behind us.  Along with him came a few baskets of food for 10 baht (about $.30) each.  Of course, we couldn’t resist and it was time to feed those hungry hippos!

Next up it was time to see the Giraffes!

There were 3, which appeared to be a baby, a mom and a super-duper tall dad.  The animals were being fed and again, we were surprised at how close we were to them.  It looked like the giraffe could just walk right over the fence. 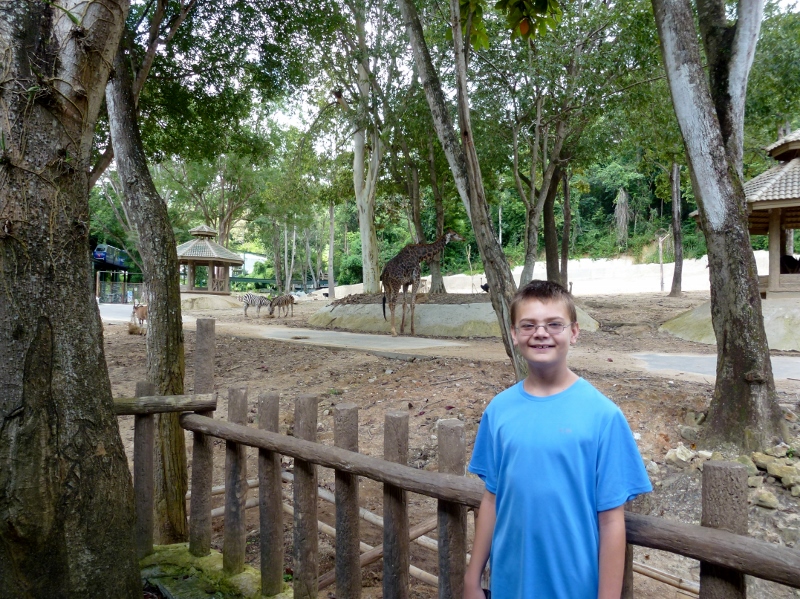 Next stop around the park was the Panda Experience.

As we were rounding the corner, I looked up and saw this huge elephant with big tusks coming at us.  Alan and Anya quickly peeled off to the right, while Anya and I went to the left.  Gotta get out of his way!  Lars and I stood near the gate on the left, little did we know …. 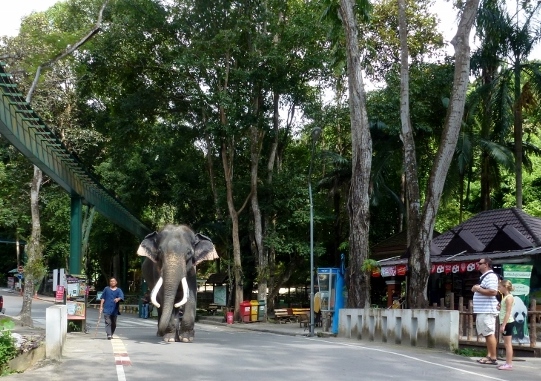 The guide was waving towards the gate and I thought he wanted us to stand over there.  So we did.  He kept waving and waving a bit frantic after the third time.  Then it finally clicks!  He is trying to tell me, that is where the elephant is going.  This was the exact spot where the elephant enters the enclosure. We quickly boogied on out of there, with seconds to spare.  Phew!

We entered in the special viewing area and only viewed one panda.  He looked very tired and lonely, so we aren’t sure if he is all alone regularly or if others are just in another room.  It was a beautiful panda and it would be great to see him with a friend. 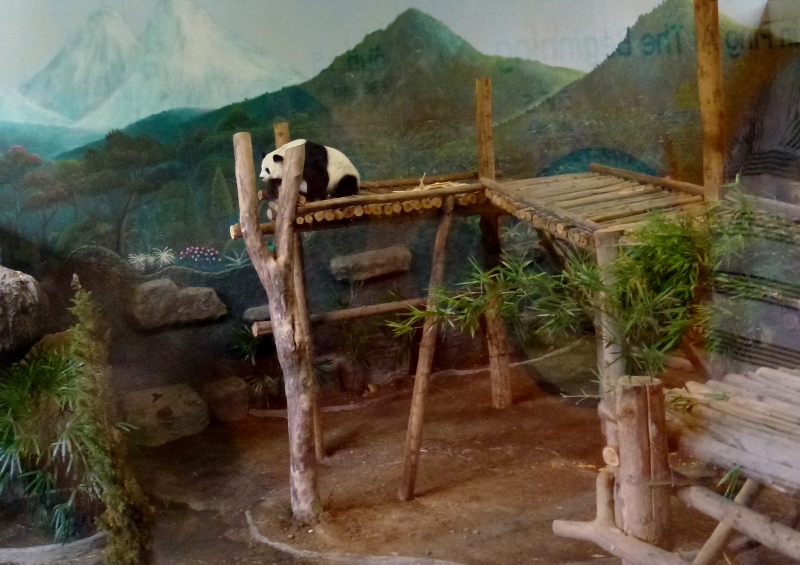 Right next door was something that gave us some serious chills!

It was well over 32℃ (90℉) outside and with humidity topped 38℃ (100℉) and we are dripping with sweat. We entered into the room for the Snow Dome and were handed some huge heavy duty jackets.

You’ve got to be kidding me!  How cold can it possibly be? 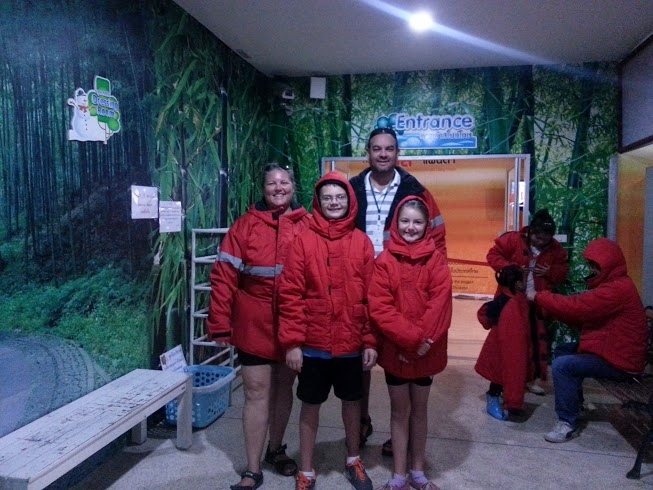 We go ahead and get all bundled up, well on our tops.  We were still sporting our shorts and sandals.  Now we were allowed to enter into the Snow Dome.  It was a room full of ice and snow and the digital thermometer read -6℃ (21℉)!  It was play time, and the kids had a great time tubing down the ice and checking out the igloo that was there on display.  Unfortunately we weren’t allowed to bring in a camera, so no photos.  It was fun, but even being wrapped up in a huge jacket, our sweaty bodies quickly chilled.  So out we went.

We continued on to the Aquarium and really loved that.  Go figure!  We are water people to the core.  We actually received a guided tour and learned quite a bit about Asian fish.  The Aquarium is set up to guide you from the fresh water of Asia highlands, through the lowlands, and into the salty sea.  We loved the sting ray area and we were even able to place our hands in the tank and have them suck on us a bit.  It was similar to the feel of our fish pedicure, but on a big mouth scale.  Weird! 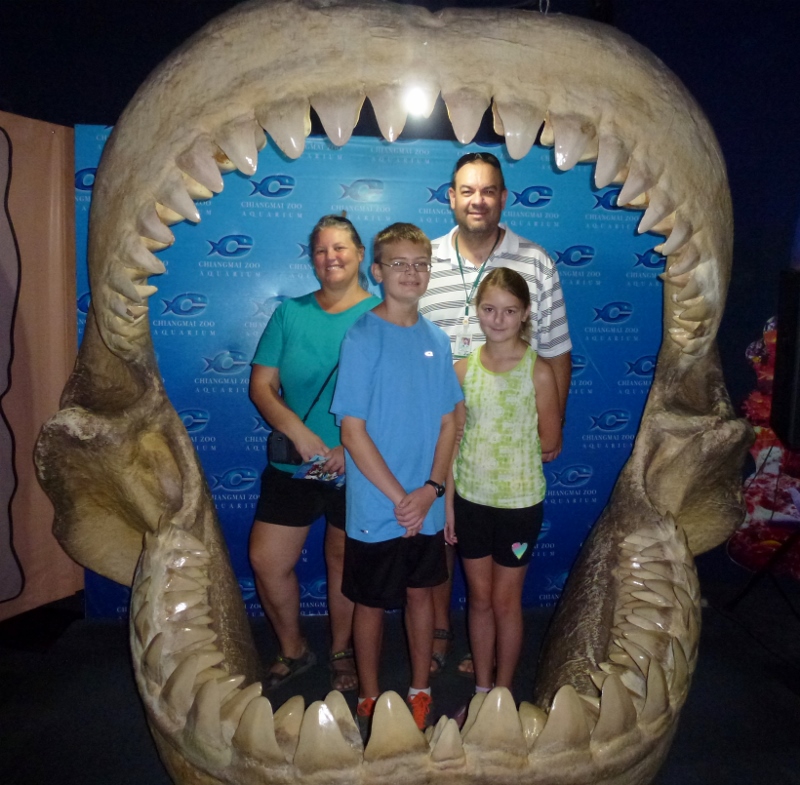 There was some construction going on in one of the aquarium tunnels, so we walked through the other and it was just fascinating.  I can’t get enough of feeling like we are in the sea. It just made it very clear to me that we need to get some diving time in, while we are in Southeast Asia.

We continued around the zoo and hopped on and off the zoo bus.  We made it to the peak of the zoo and visited the penguins.  They sure were funny waddling around and sliding around in their enclosure. Back on the bus we go. We had been at the zoo for a few hours and it was getting very hot, so it was wonderful feeling a breeze and enjoying the view the city below. 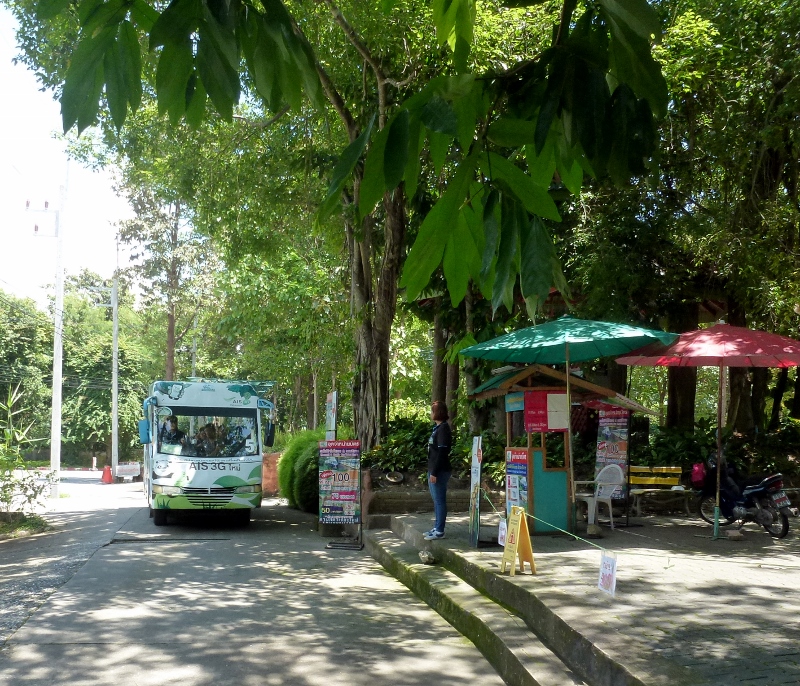 We did pass by some elephants and they were offering rides.  We weren’t up for that, especially after having just visited the Elephant Nature Park.  The did look a bit sad, but we are hoping they are loved and well cared for.  Overall, we had a fun day.  While it wasn’t quite the San Diego Zoo, the kids had fun.  We were really close to the animals and even fed some of them. 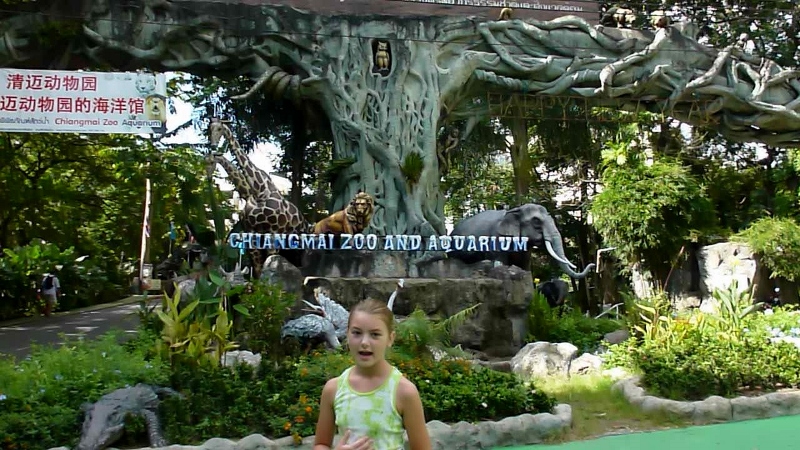 Disclosure: This was a sponsored visit.  All opinions are our own.