As Heidi mentioned in previous posts, we stayed in the Medina while we were in Marrakech and Essaouira.  If you go to Morocco, checking out the local Moroccan Souks are one of those “must do” type of things.  We had fun getting lost (not really), and just wandering around.  In this post, I’ll talk about our experiences walking through the various souks (marketplace or bazaar).  It’s fun to show the kids a different way of buying and selling goods.

While we were in the Medina, we were a very short walk from the dense vendors selling their wares.  Once we were walking through the alleyways, the vendors were friendly.  If you stopped and looked, they would ask you to come in and look around.  They were all to happy to explain what every item in their shop was for, be it spice, soap, leathers, or fabric.  It was actually very educational, and most vendors were very accommodating about letting us take pictures.

If we looked at a food shop, those guys were a bit more energetic about explaining how we should look at their restaurant because their food was the best.  All of this was not unexpected, and I was surprised that the vendors weren’t more pushy.  I was lulled into a false sense of security. 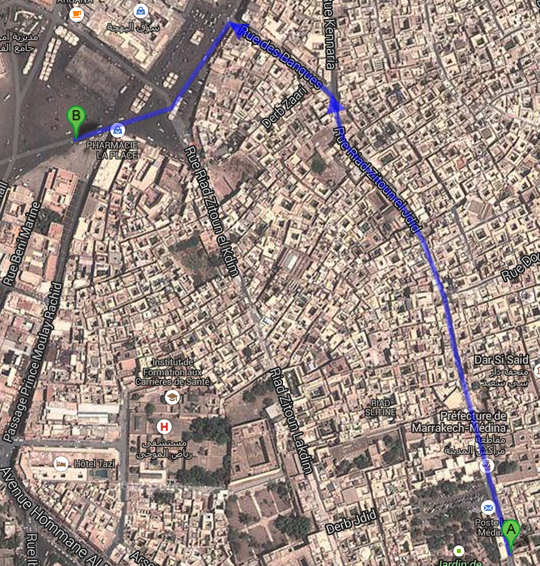 The map above shows the most direct route from the riad where we stayed to the big market square.  Obviously, we went down a lot of other alleys, backtracked here and there, and saw numerous things that you just don’t see everyday.  You can see that we stayed in the thick of things which is what we recommend to those travelers willing to get out of their comfort zone a bit.

So up until we hit the big square (B in the map), things were fairly mellow.  Once in the main marketplace, called Jamaa el Fna, the aggression level went up a bit.  The people were more in your face, and would touch you.  A couple of things happened at the same time which kind of threw me.  First off, there were these guys who had a carpet laid out on the ground, and he had a fairly sizeable cobra slithering around on it.  (Any sized cobra is big to me.)  The guy blowing his flute thing was tapping the cobra on the head with a stick.

Quick experiment:  Take a stick, and tap someone right on their forehead over and over.  I’m going to assume that it doesn’t take long for that person to get irked in a hurry, and tell you to, “Knock it off!”. 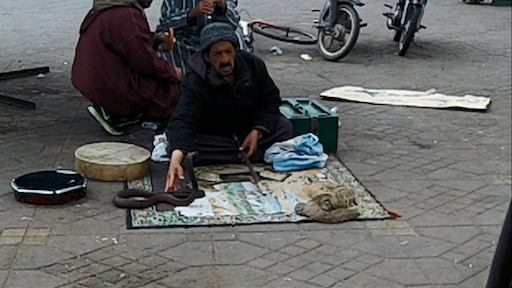 Needless to say, Mr. Cobra was none too pleased, and his hood was fully flared, and he was looking to put a snake hurt on something or someone.  Lars saw this, and went over to take a picture, before I could tell him to hold on.  Once the picture was taken, the Snake Charmer’s business partner wanted some money.  Pictures are not free!  I’m looking for some coins, and the guy is very insistent about getting his money.  “Show me the dirhams!”  (Sorry for the Jerry McGuire reference.).

At the same time this happens, a pair of veiled women (Niqab – only their eyes and hands were showing) were decorating Heidi and Anya’s hands with henna.  “Wow!”, I thought to myself.  “Heidi is actually having this done…”.  What I didn’t see/hear was the women grabbed their hands, said it was free, and just started henna’ing.  Once the henna was done, it went from free to 300 dirhams (roughly 30 Euros).

So I’ve got Mr. Snake Charmer on my left, and the Henna Twins on my right.  Both groups are very insistent on getting some money.  I gave Lars some change (probably around 5 dirhams) to give Snake Dude, just to be done with him, so I could focus on the women asking for a lot of money.  Heidi said, “You told me it was free!”, but one of the women was not having any of it.

Suddenly they were having a limited-time discount, and it went from 300 to 200.  They figured my searching for coins in my pocket was a negotiating tactic, so the price was now 100, then 50.  I’m explaining to them that I don’t have 50 dirham, and that’s when one of the ladies grabbed Anya, and that’s when Heidi’s patience wore out, and she grabbed Anya back, and started to walk away.  I told the woman she could take the 5 dirham coin in my hand, or take nothing.  She took the money (of course), and then made some rather rude suggestion about my mother.  I should have asked for their business name, and filed a complaint with the BBBM (Better Business Bureau of Marrakech).

Wheeww!  All of this happened within about 15 seconds.  Kind of stressful, but our outlay for the “entertainment” was less than 10 dirham.  After that, we told the kids not to take pictures, and don’t touch anything.  As we continued, we saw more interesting sites.  There were guys who wanted you to touch or hold their monkey.  No.  How about taking a picture of my vulture (yes, a vulture).  No thank you.  The entire vibe was so much more intense in the square.

We had read that there are more things to see in the evening in the square, so we knew we had to check it out.  With our day experience behind us, we knew “the rules” and were confident that we wouldn’t buy anything that we didn’t want.

The difference in mood was palpable.  There was definitely a difference from the vibe.  As we walked around, there were many more people.  Vendors selling things, musicians, and tourists. 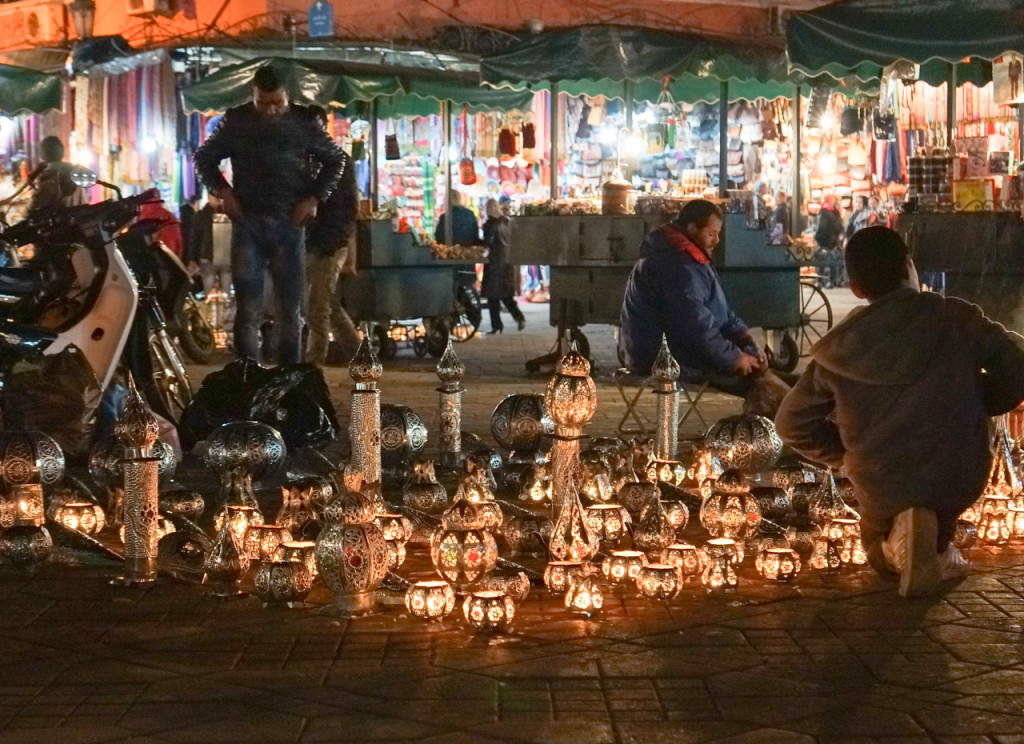 Walking around the square we noticed it was divided into sections.  Our first section was standard vendors, but this time, there were kids hawking things.  There was one young girl who was trying to sell us a toy which is shot into the air with a rubberband, and then it hovers to the ground.  It’s got lights and is very shiny.  She followed us for a good 100 feet trying to make a sell.  There were also a lot of young boys with simple shoe shine boxes.

Next along our path was the dried fruit, fresh fruit, and vegetable vendors.  The produce looked fantastic, and some were even making fresh juice, but we were just checking things out, and didn’t buy anything, but the vendors would call out to us trying to get us to come closer. 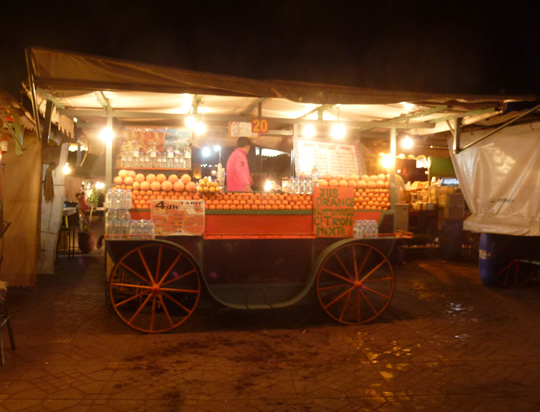 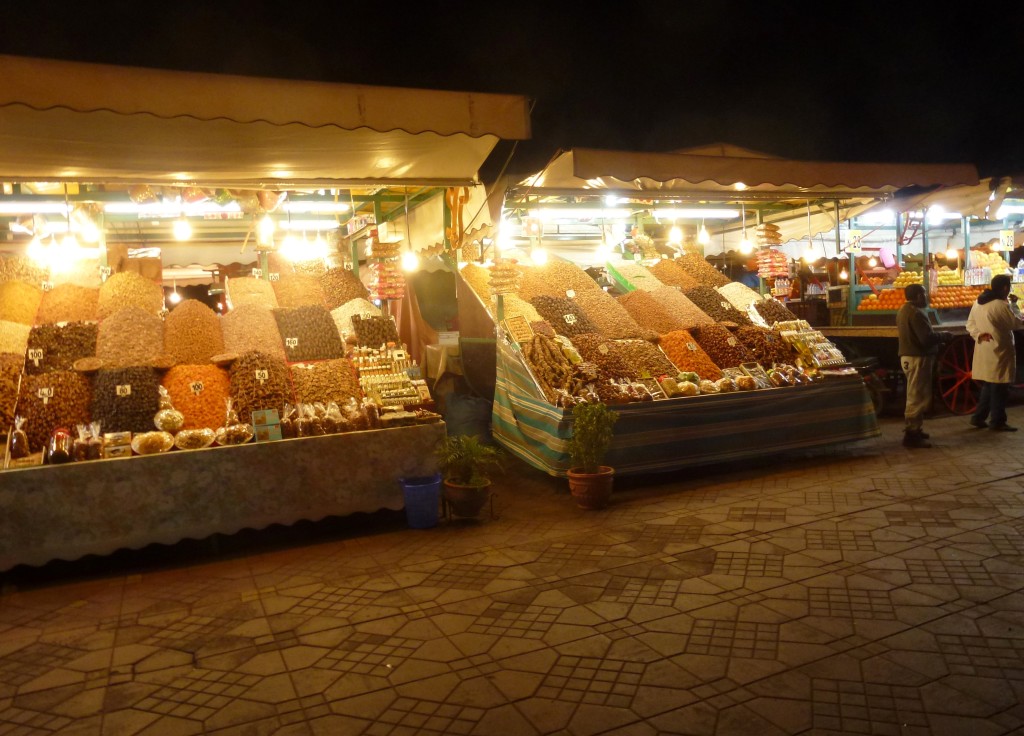 After the fruit carts, there was a cacophony of noise.  There were several groups of musicians and dancers doing performances.  There are very few lights in the square, so it’s very dark, but there would be big groups of people standing around watching the performances.  I could see in the center were typically people seated on chairs, and they all looked like tourists.  A man motioned me to come and sit, but I knew that they were probably going to ask for a good amount of money, so we all just stayed on the outside, and watched and listened. 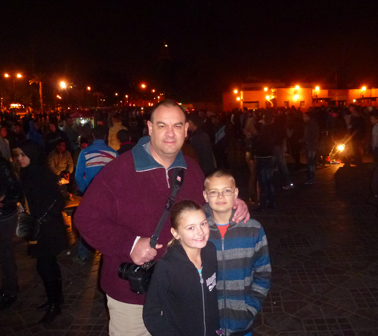 We ran into a guy who had a small popcorn cart, and it was made fresh, so we decided to grab a couple of bags for about 50 cents (U.S.).  I think Moroccan popcorn might just be my favorite popcorn.

We walked around some more, and figured we should take a look at the food vendors.  As we neared the food area, the “salesmen” started coming out.  They were all very insistent that we should look at their menu, or just sit down for a tea.  Yeah, right.  I probably said, “I’m not hungry.” about 50 times as we walked through.  We were in the middle of the “food court”, and once again, the level of aggressiveness went up.  Several competing vendors were stopping me (I was in the lead), and trying to block my way and putting their menus in my face. 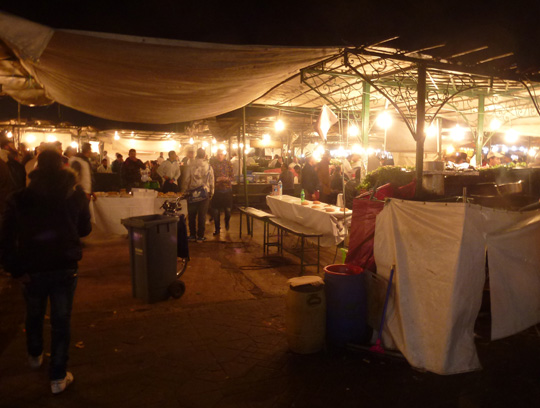 As we were navigating out of the food area, Lars spotted some snails that one vendor was cooking in a bit pot.  He was jazzed about trying a snail (I need to get him checked), and the vendor gave him one to try.  Our intrepid Lars pulled it out of the shell with his trusty toothpick and chewed on it.  And chewed.  Lars’ opinion:  “It tasted like a peppery rubber band.”.  I could have told him that, but, well kids need to learn…about snails.

Visiting the Medina, and touring the souks were a great experience.  All of the senses were engaged, and there were several memorable experiences.  Would I recommend travelers visit the square?  Absolutely, but don’t touch, handle, or photograph anything until you know how much it costs.  Check out our Photo Walk of the Marrakech Medina.

Right off the bat, the atmosphere in Essaouira was different.  It was more laid back.  It had more of a beach town feel to it, which fits, because Essaouira is a beach town.  Once again, we were right in the Medina.  As you can see below, we’re right in the thick of it, and we’re very close to the main square. 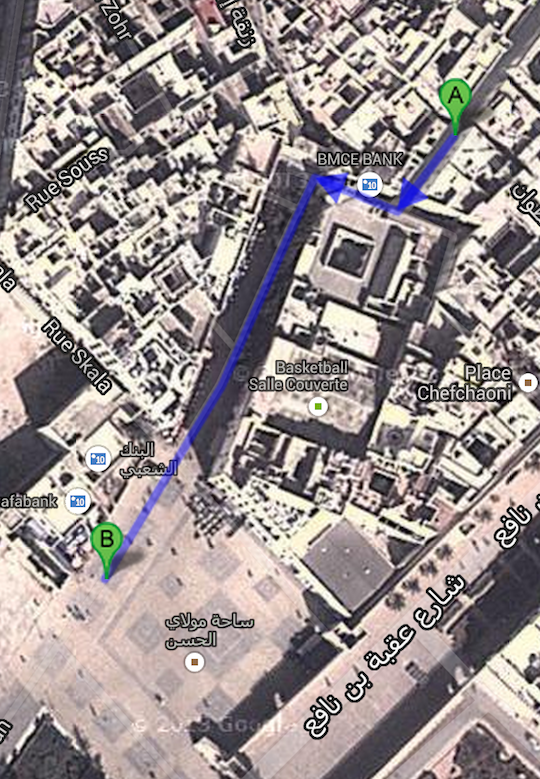 As always, we wandered around the entire area, and the various vendors were so much more relaxed.  They wouldn’t harass or bother you.  If you wanted to handle or look at their wares, it was OK.  It was such a big difference.  The food/restaurants were a tad more assertive, but it was no comparison to Marrakech.  We sampled chawarma from a number of different places during our stay, and it was usually very good.  I even had a chicken tajine for lunch.  Yes…I’ve grown gastronomically!

On another one of our wandering trips through the Medina, we came across the chicken souks.  There’s nothing like seeing a bird get plucked, or hanging meat!  While not overly appetizing, it is a good reminder on the differences between the chicken under the cellophane and the bird hanging upside down right in front of you.

At night, the souks are alive, and there are more vendors with movable carts.  We found the best find!  Cotton Candy!  The guy had a hand-winding cotton candy machine, and we ordered four of those bad boys, all for the low low price of 20 dirhams.  Not a bad deal.

If you’re looking for a more low-key vendor experience, I think it would be tough to beat this place.  We had great coffee, gelato, and tea, and seeing a smaller, less hectic, Moroccan beach town was just what the doctor ordered.

Either way, if you like the In-Your-Face style of Marrakech, or the more easy-going Essaouira, you’ll find tons of things to see and photos to capture.  Just remember what I said about the monkeys.  And the snakes.  Oh, and the vulture…