A few years ago I read about the bamboo train in Cambodia and I was fascinated with it.  It sounded like a fun experience that needed to go on the bucket list, if and when I ever made it to Cambodia.  Back then, it was a far off dream to ever visit Cambodia and look were we went!  As part of our last few days our of a month in Cambodia, we made it to Battambang and rode that Bamboo Train! 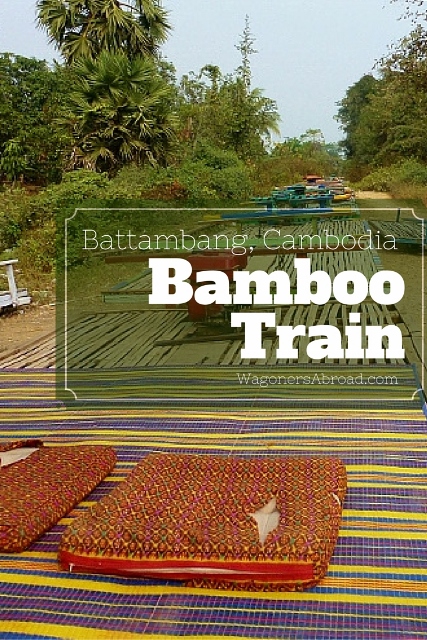 I am sure many of you have dreams like this and hope that they will one day come true.  It seems like we are batting a thousand with our dreams and getting to do things on our bucket list all of the time.  I will let you in on a little secret, it isn’t luck!  We aren’t lucky at all.  In fact, it is something quite different.  It’s about having a dream, with a clear vision and making it happen!  One day I will write about many of these things, but for today you will get to read me rambling on about the Bamboo Train!

For most people this wouldn’t likely make a Bucket List, but if you are in the area you really should take advantage of this.  Rumor has it that the Bamboo Train will stop running soon, as they plan to repurpose the path for something else.  So give it a try as it isn’t expensive, but it is an experience to remember. 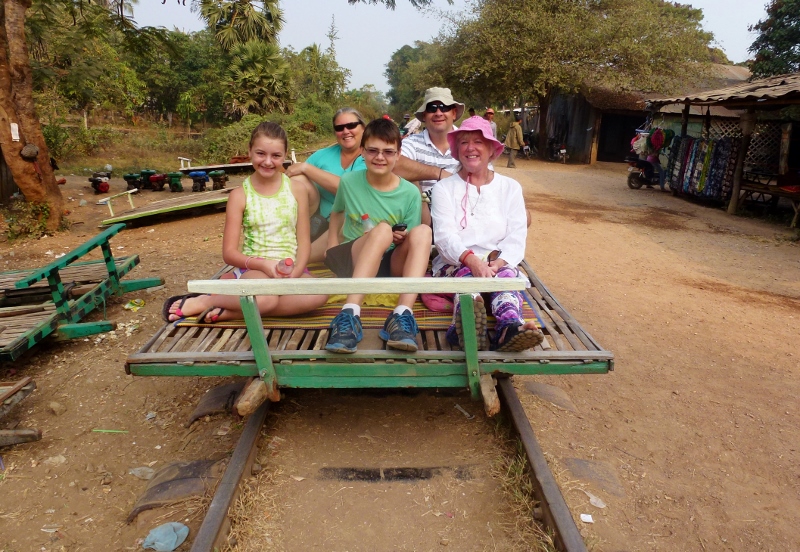 We are all about creating experiences and that is what we prefer to spend our money on, versus “things”.  This was one of those experiences I wanted our kids (and Gma Bev too!) to have to remember their time in Cambodia.  Yes, we did plenty of other great things like touring the floating villages, dirt bike riding and visiting the Angkor Wat.  This was going to be different, as it was something to do that was just pure fun.  This was going to be one last silly thing to do, on our Adventure333, before Gma Bev had to fly back to the USA. 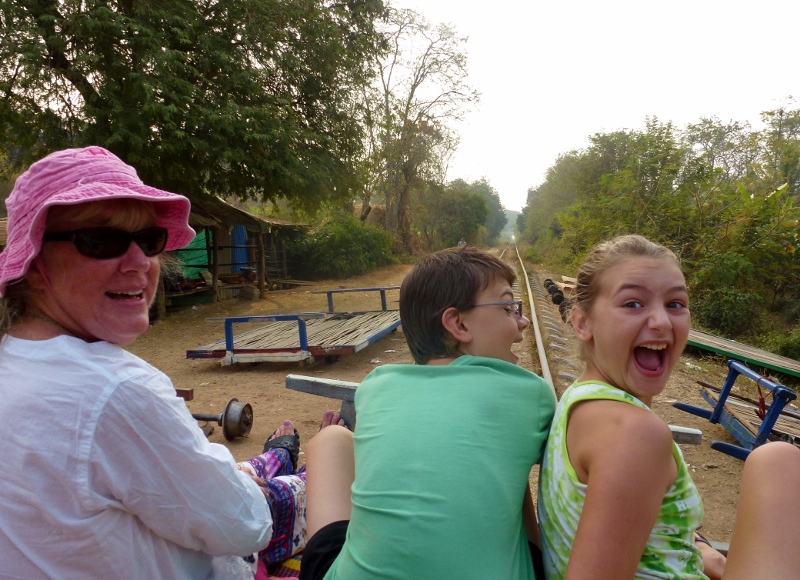 Our Morning Out on the Bamboo Train in Battambang, Cambodia

Hopping on the Bamboo Train

Upon our arrival we were greeted by the “Tourist Police”.  He introduced himself, explained the price of the ride and the process.  We were going to ride on a platform about 20 minutes down the track.  We would stop at a local village and be approached to buy some goods.  He advised that we should feel obligated to purchase things and we should only if we wanted to.  After our shopping, our cart would turn around and return us to the starting point. 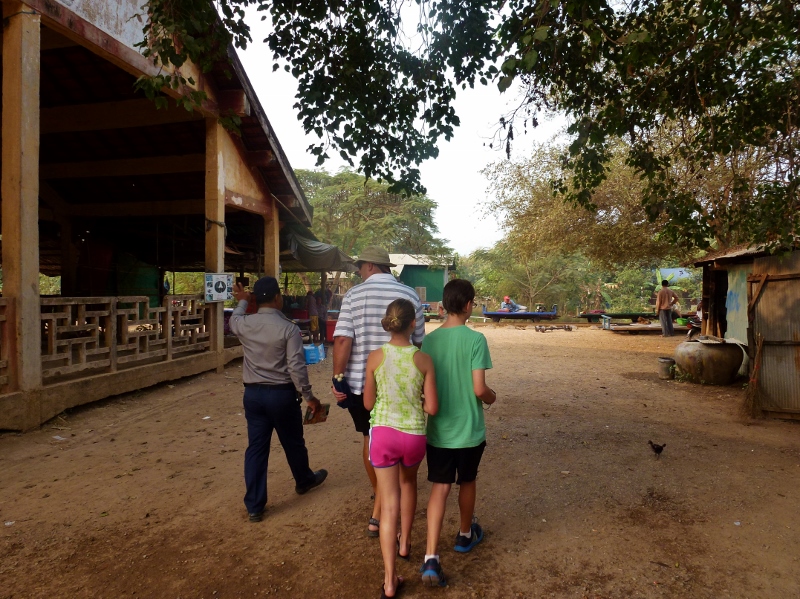 It appeared we were one of the first passengers to arrive for the day.  Woo Hoo!  No crowds.  We love that, so it paid off to be up and out by 8:30 am.  All of the bamboo train carts were lined up, ready to go.  Our driver greeted us, we paid him and off we went! 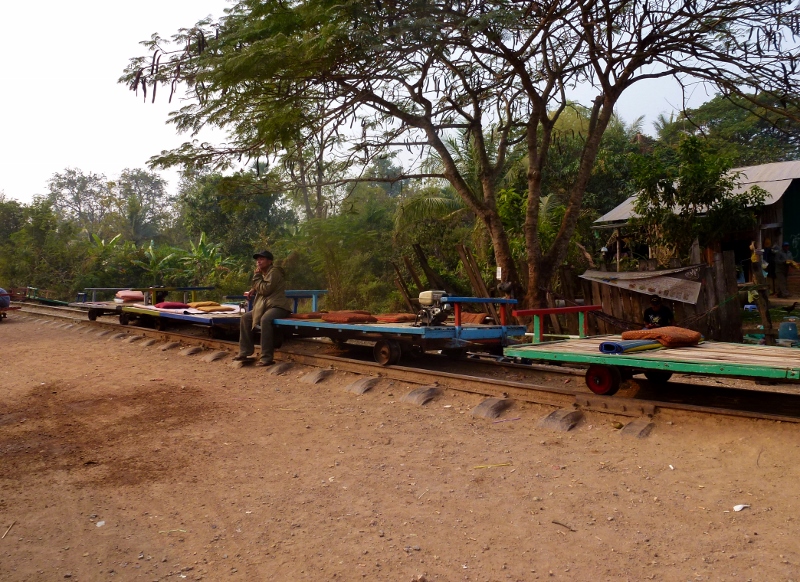 There was a little engine that he somehow drove with a stick.  His brake was a wooden board, which hung by strings and he just stepped down on it to brake!  Yep, a wooden board against the tracks was our brake.  The engine hummed along and off we went.  We started of a bit slow and then really began to zip along with some speed.  The clickety clack sound as we crossed each length of track was great to hear as well.  That is until you begin to notice that parts of the track aren’t really aligned or connected.  It was also apparent that the track was very crooked and misaligned.  Oh well, we will just hang on and see what happens.

Once we were over the initial OMG moments, we were fine.  One of those moments was right off the bat, as we crossed over a bridge, which appeared ready to collapse, with many missing boards!  A million thoughts roll through you mind as you approach. 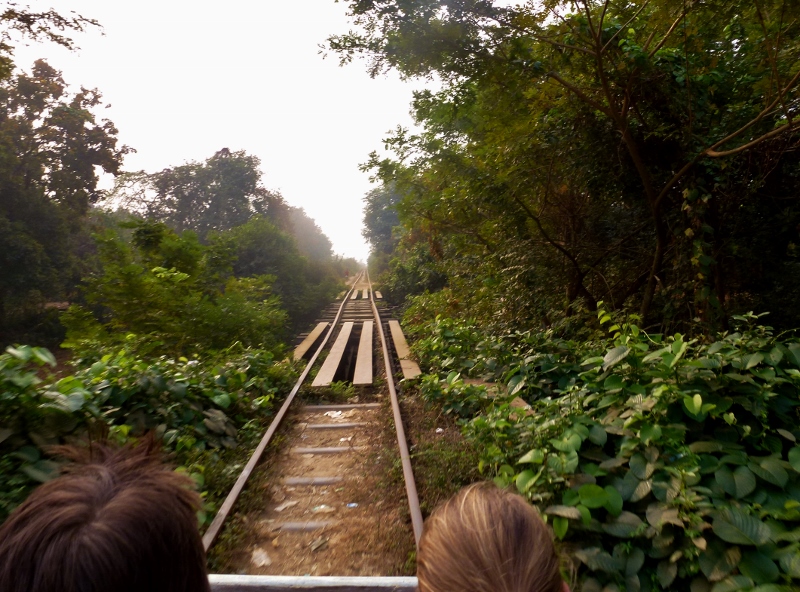 Sometimes you have to just take a deep breath and realize it will only be a 10 foot drop down. 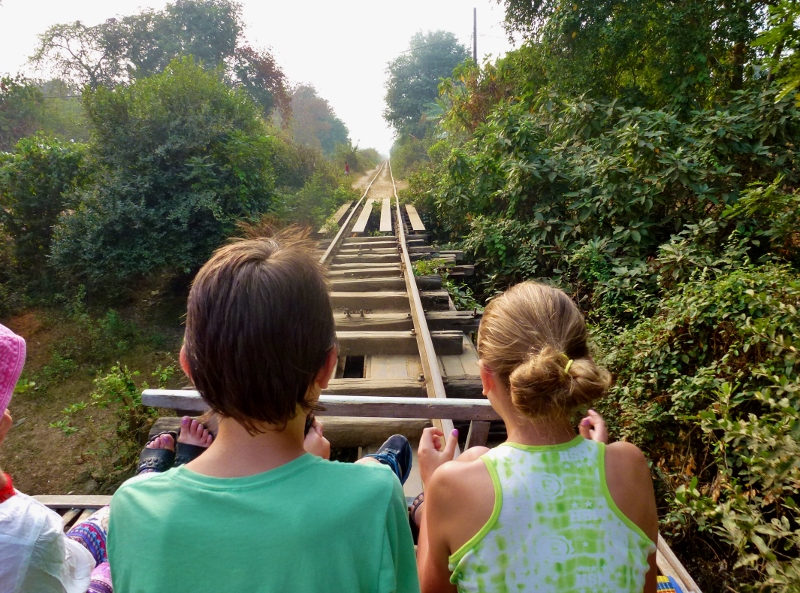 The scenery along the way wasn’t stunning, but it was nice and relaxing.  Our visit was in the dry season in January, so I imagine it is far more beautiful when the rice paddies are lush and green.  There were many high shrubs along the sides, which made it difficult to see past, and sometimes you would get brazed along the side.  It was nice to see the countryside and the water buffalo and some birds as well.  My favorite was passing by the locals and their homes.

Once we made it to the village, it was time to take our train apart.  We watched for a bit and then roamed around the few shops that were there.  The little kids would follow you around trying to sell bracelets and the like, but we just wanted to look around and return to the start. 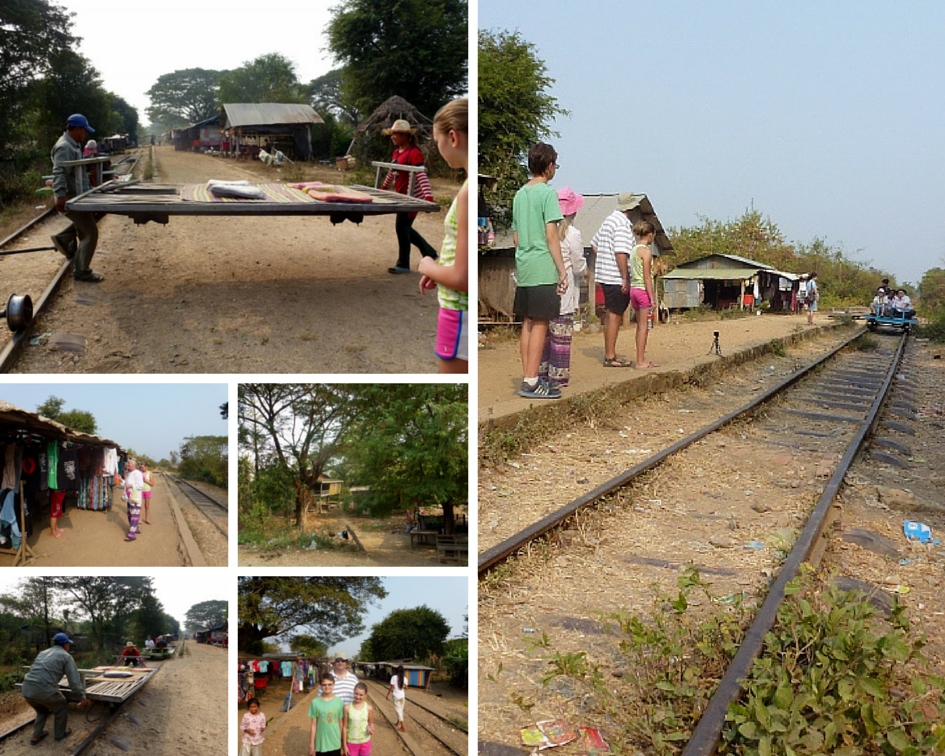 I’m all about a fun game of chicken, but on a fast-moving track it was different.  There is just one track and it is used for both directions.  It was no problem for us on the ride out to the village as we were there early, but on the return look out!  We were blazing down the track, hands in the air, acting like we don’t care.  When all of a sudden we spot an oncoming bamboo train, in the distance. 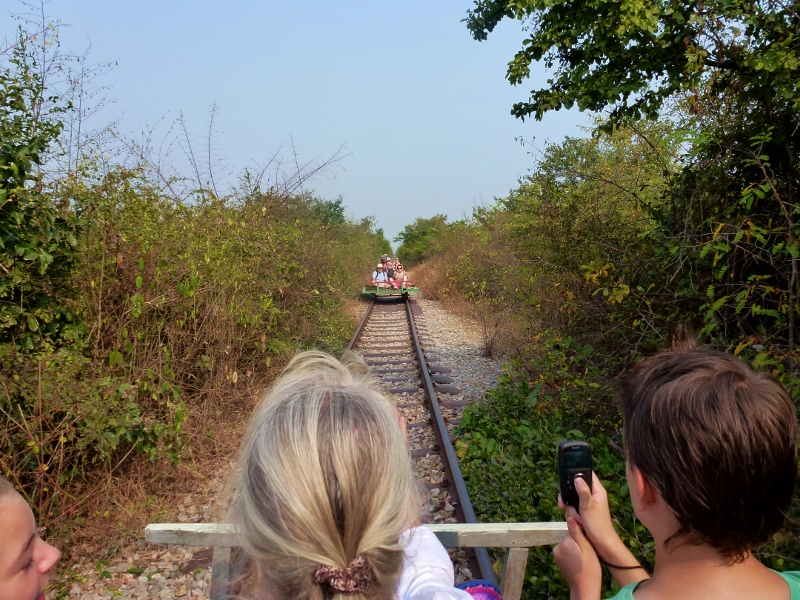 Uh oh, the time has come.  This is what we had been waiting for.  We knew we had 5 people, so that meant we would win the battle of chicken!

Note:  From what we read, if you have more people on your cart, you have the right of way.  We knew we wouldn’t have to get off and disassemble our train, with 5 people.

Wrong!  I guess the most people on a train doesn’t trump a line of 3 cars coming at you.  Nope it was one bamboo train against 3, so off we went.  Our car was taken apart and set aside, as the others passed.  Alan got some good footage with the GoPro too.

Side Note from Alan:  I was not expecting much, but this was a very cool thing to do.  The “train” consists of:

That’s it!  When two trains come together, the “Loser” takes out the engine, and sets it next to the track.  The “Winner” will come over and help the “Loser” take off the bamboo platform, setting it beside the track.  Then the axles are taken off.  When the winner passes, the train is put back together in reverse.  It’s a kick in the pants to watch! 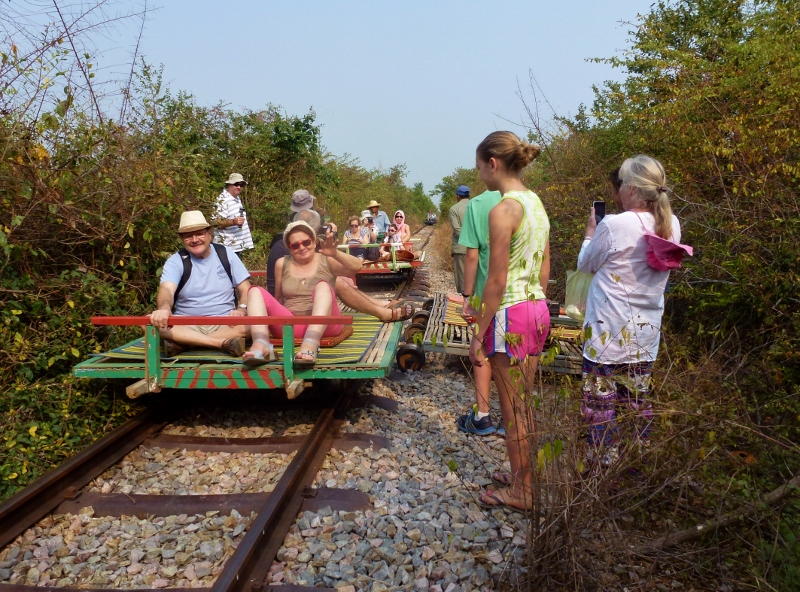 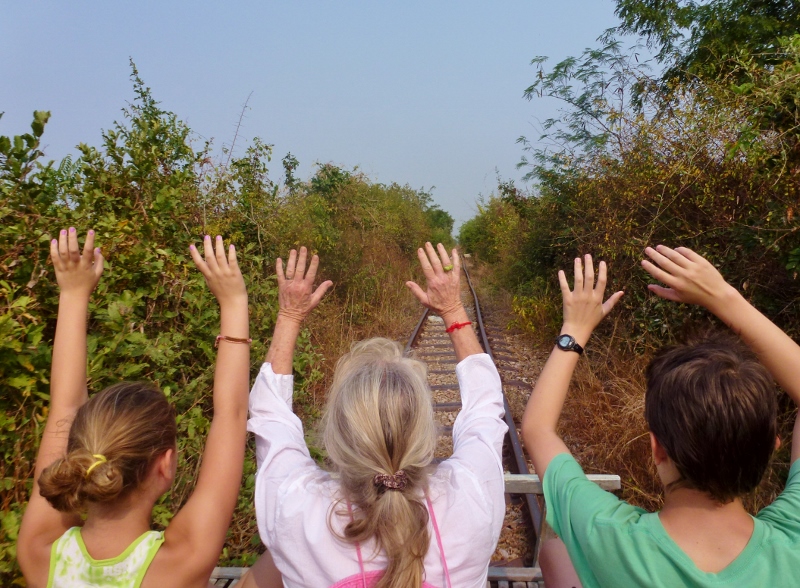 Feel free to watch the video of our Bamboo Train Experience as well.

2 thoughts on “Hurry And Ride The Bamboo Train In Battambang Cambodia!”