This is a post on the military precision that pervades the personnel at Wagoners Abroad. While we were in Phuket, we had rented scooters, and we had a Mission (note the capitalization). 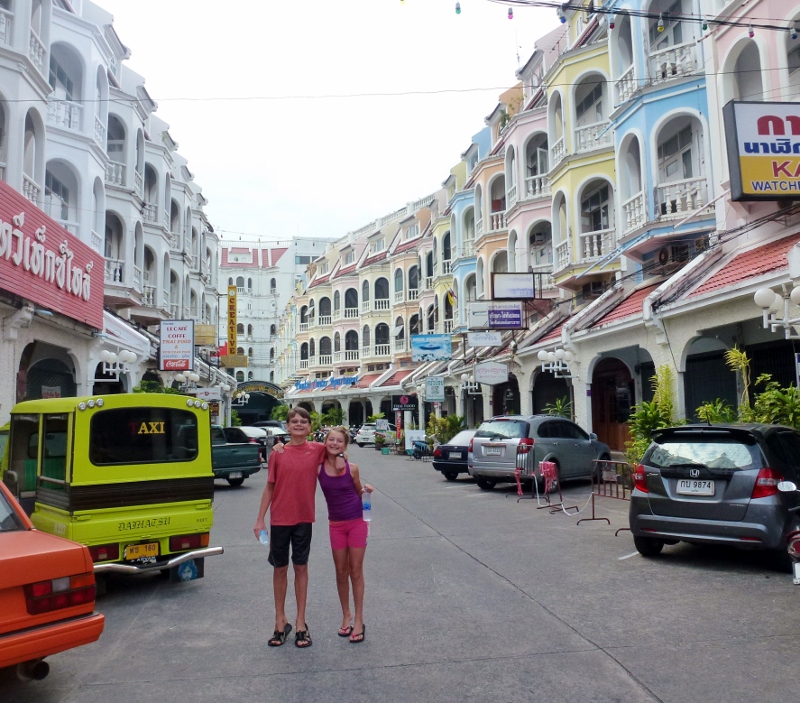 Before we get into the operational details, let me discuss the situation.  We are staying in the section of Phuket called Phuket Town. It’s kind of the “old city part” of Phuket of where our barracks consisted of a room in a hotel.  It was the time of year in Thailand, and much of Asia was celebrating the Chinese New Year.  That meant that spacious accommodations were far and few between.  Trust me.  We were glad to have a place to hang our heads.  It was Phuket Center Apartments.  It had A/C, a fridge, and a kettle, so we were all set. 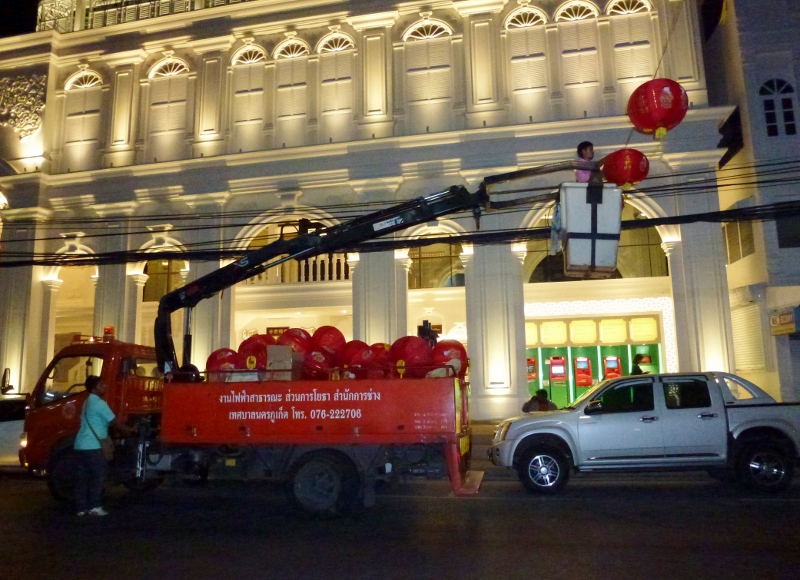 Now as anyone in the military will tell you, there is an unwritten mission, and that is to Come Home.  That will come into play later, but the motorized (remember…mopeds) Wagoners Abroad Squad consisted of Lt. Heidi and Corporal Lars riding point, with myself and Private First Class Anya riding rearguard.

A Sidenote about my rank:  I think of myself as The General.  Sometimes it’s capitalized, but there’s also time when it’s just general.  My rank changes (sometimes daily) from high-ranking military brass to the lowest grunt based on my contribution to The Fight. You know, The Fight to Find Food.  The Fight to Not Get Lost.  The Fight to Let the Kids Stay Up Late.  And so on…

Our mission started a bit late, and at some point it was determined that we were not going to be in the desired place to see a great sunset.  OK…no problem.  If anything, we’re a flexible group.  A flexible group that needed a new mission. 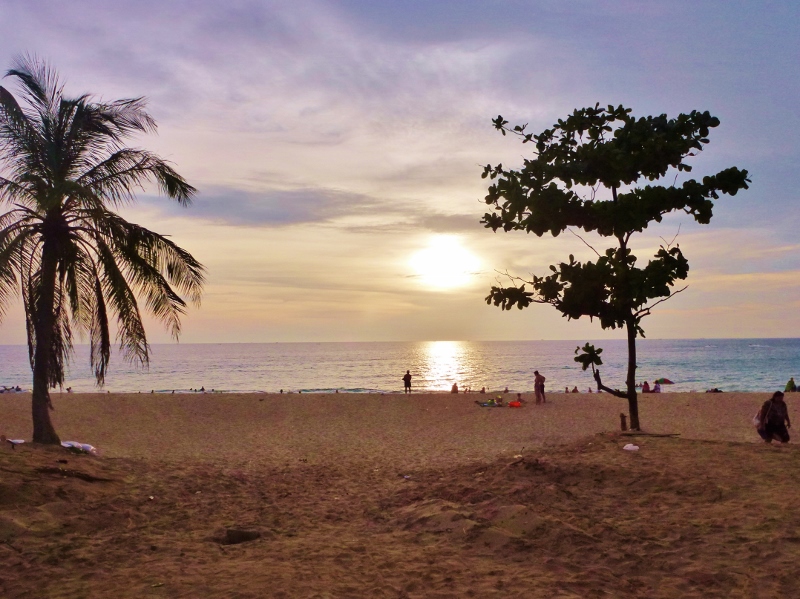 We watched the sunset where we were, in Kata Beach, and decided on a new mission.  Our new Mission:

In order to complete our new Mission, we had to meet a couple of objectives.  Obviously, the biggest one is to find a place that sells shoes.  Heidi had consulted with her local operatives and Internet Intelligence in the area, and had obtained a map which detailed the Mall, in Patong Beach, and the route by which to get to said Mall.

With Heidi and Lars in the lead, we made good time, saw some sights, and then finally came upon our objective…the Mall!  While we met that objective, the objective that we did not meet was parking at the mall.  Actually, we did not discuss this objective at all, and that’s when I took it in my mind to lead by example, and made my way (the wrong way) down a one-way street while being yelled at by the…the… Enemy (Mall Security) is a strong word, so how about Opposition.

I will say this person’s objectives were counter to my objectives at the time.  Not his fault, I was the interloper here, and technically, I was the one breaking the law.  Throughout my life, there have been many many such occurrences of me skirting, bending, and flat-out breaking the law in outrageous fashion, but those missions have been classified as Super Freaking Top Secret, and are beyond your security clearance.

With me “leading”, I tried to find a parking area, and was going to try to get to the other side of the parking structure, but alas, the Opposition had signaled for reinforcements, and I was forced to Retreat.  Retreating is never a fun option, and it is even less so on an under-powered moped.  When I returned past the first Opposition, he yelled at me,

“What direction are you?!”

I chalked this odd combination of words to the heat of “battle”, and that English was not this person’s first language. I completely understood that he was:

But I waved my hand, hung my head a bit, and scooted by him trying all the while to look apologetic.  All this time, the other half of the squad had actually followed directions of the Opposition and went what the military likes to call The Right Way.  Unfortunately the Squad was officially separated.  Fortunately, Private First Class was not aware of the terms mutiny or insubordination, so I was still in charge of our two-man team.

During a Post-Mission Debrief, it was determined that Lt. Heidi and Corporal Lars had waited at the point where we had lost them.  Like good soldiers, they waited, and waited for their leader.  But no leader was found…

So what is the Mission again? 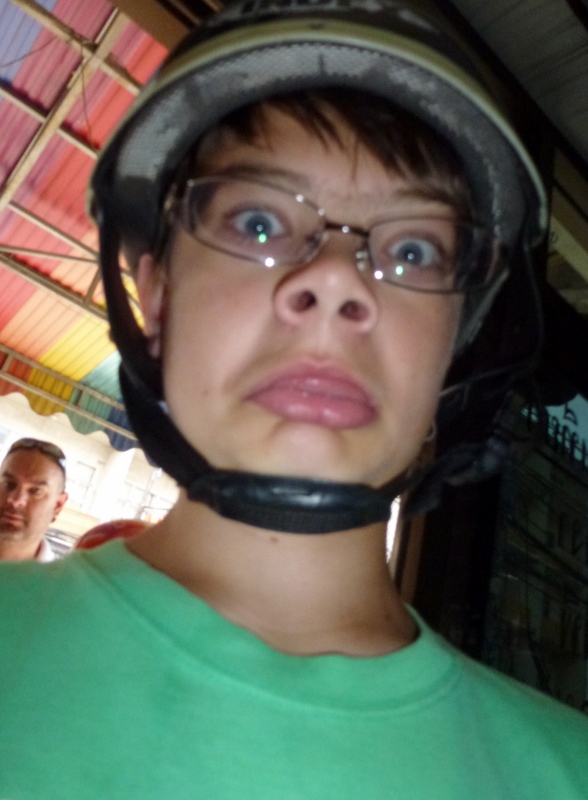 That did not change, so with that, Anya and I went into the mall parking deck, parked, and made our way to the floor that sells shoes.  We scouted and searched, but we were unable to find our comrades.  Our telecommunication devices were calibrated to the local frequencies (no SIM cards), so we had no way to communicate:

With the second Mission a bust from my standpoint, we reverted to the unspoken mission of Let’s Get the Hell Home.  After all, it was dark, and HQ was 20 kilometers away.  So that became our newest mission, and to that end, we made our way back home.

Along the way, we completed another unwritten mission, A Soldier Gotta Eat, and then were back on the road.  It was about the time we made it into Phuket Town that it dawned on me that I didn’t know exactly where our Headquarters was.  I know relatively where we were, so there was a bit of Wrong Way This and U-Turn That (those ARE military terms).

The fact that you are reading this means we were ultimately successful in getting home.  Not five minutes after our arrival back at HQ, the other part of our team returned, and we had a bit of a debrief on the When, Where and How Badly the Mission fell apart.  Even though the first two missions were compromised (I think the military term is FUBAR), the intel we gathered about the area, our backup plans, and my overall leadership abilities, will be extremely useful for future missions.

4 thoughts on “Phuket Scooter Day! We’re On A Mission”