If you haven’t noticed by now, Gma Bev likes to do her own thing.  Sometimes she meets amazing people and other times, she may have a little mishap.  When she visited us in Spain, a couple of years ago, she was “mugged” in Gibraltar.  We’ve also shared her Shenanigans In Laos last month.  This month we will share what she was up to in Vietnam.  Let’s just say it wasn’t quite as mellow as Laos or as innocent as her mugging in Gibraltar.  Vietnam was full of energy, scooters and scams.  We share it all with you here!

We will start with some of her Facebook posts and then we will get into her stories about the scams.  We will let her tell you in her own words about her scam experiences.  Yes, there is an “s” at the end of the word experience.  It wasn’t once, nor was it twice.  It was three times!   Well, 3 biggies worth writing about, and sharing with you.  That way you can be aware and hopefully avoid the same misfortune.

This is the proper way to cross a freeway.  We actually did it, too!  Notice the entry/exit places for vehicles and pedestrians on left side.  No need for on/off ramps.

(link to Facebook Video, it may not be visible to all viewers)
DROWNING!  Most people in Vietnam do not swim.  32 people a day drown in this country.  This city, had a flood in 1999 when 400 people drowned mainly because they couldn’t swim.  Today on our boat trip I happened to film some commotion on the bridge which is about only 20 ft. high.  (My kids used to jump off a bridge that high on the King’s River.)  A person committed suicide by jumping and no one could swim to save him.  The boats were there to recover the body.  This is a city of 3 million with no public pools; however they now have a program to teach children to swim.

(link to Facebook Video, it may not be visible to all viewers)  My daily walks are usually in the back alleys as that is where the locals live.  I passed this family earlier and when they invited me to sit I declined.  But this time I accepted.

Kudos to Heidi Wagoner for finding the ‘Carmel’ of Vietnam!   — at Hoi An Ancient Town. 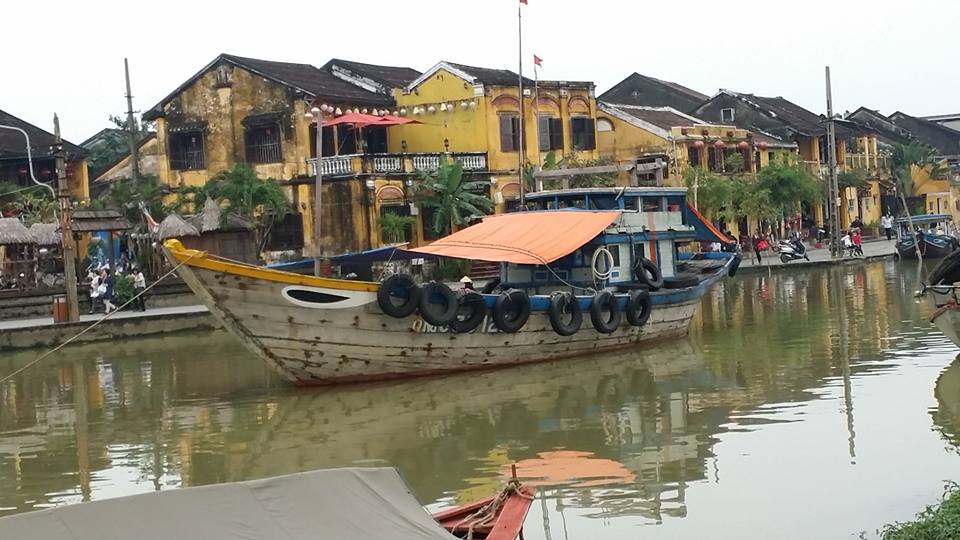 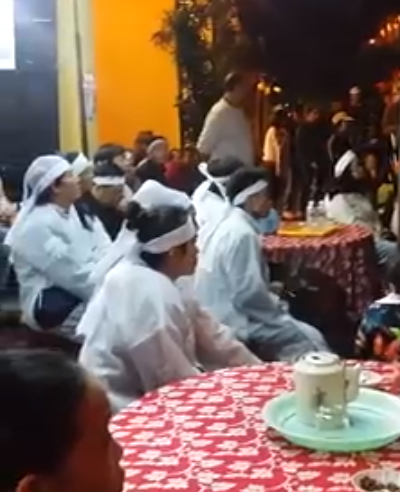 Sorry for all the videos but pictures just don’t convey enough of what we are experiencing.  It’s akin to walking on another planet.  No better…no worse….just different.  Amazing how you mingle with locals they accept you right away.  In every city so far I have walked many miles by myself, day and night, and have felt perfectly safe.  And all the people who initiate a hug with me….mind blowing!
December  (Facebook Video)
MERRY CHRISTMAS! I was sitting outside a mall in Hue, Vietnam when I noticed 3 girls waiting for someone. The 2 cute 10-year olds spied me and began giggling and nudging each other. I knew each was daring the other to approach me. Finally they got up the courage and introduced themselves. In chatting, they mentioned they learned a Christmas song in English. The third gitl was a big sister. Aren’t they adorable. I’ve been so busy, I forgot to post this!
December 22, 2014 at 7:37pm

Just had to share as i thought it was cute what Nam wrote.  He and his girlfriend are going to meet with us at the airport this Friday before we fly to Saigon. 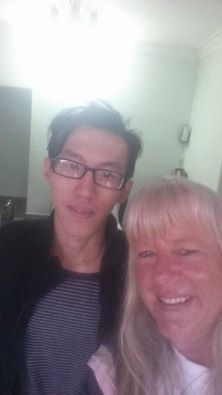 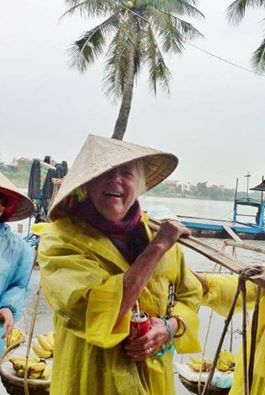 (link to Facebook Video, it may not be visible to all viewers)

A NOTE FROM SAIGON…..I am now officially an expert at crossing the street! 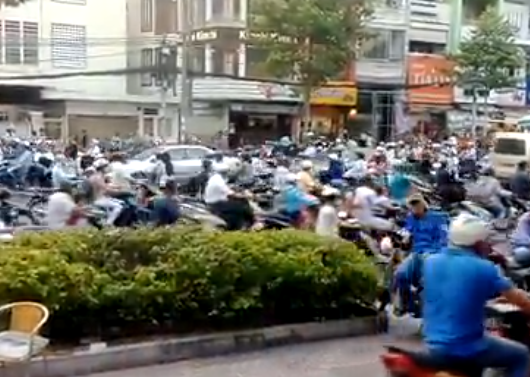 December 30, 2014 at 2:35am ·
(link to Facebook Video, it may not be visible to all viewers)  A little after 1 am, I finally decided to investigate where the loud music was coming from.  A birthday party on a Monday night!  They insisted I join them.  It’s 2:30 am….just got back to my room, only to discover Heidi, Alan and Anya were still up having a pickle party! 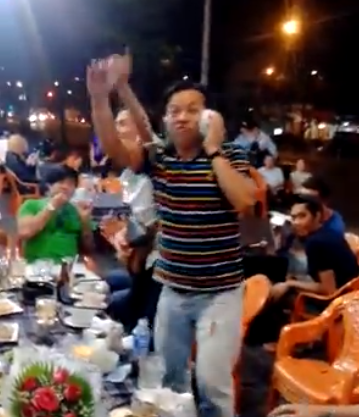 January 1 at 1:07am
HAPPY NEW YEAR FROM VIETNAM!

First picture is the requisite McDonalds.  We are staying right across from KFC.  (Pls. view prior post to see how I risk my life just to get a chicken/biscuit!)

Third pic is the only post office at least in this district.  9 million people in Ho Chi Minh, 8 districts.  AND, no mailboxes!  You must go to P.O.  Heidi and Lars in front of P.O. And Alan and Anya at the tunnels used in Vietnam war by the North.

I love you all and I especially send a big hug to my husband who is being such a good sport about my not being there!

January 2 at 9:16am
Actually at bus waiting to go to Cambodia.  So long Vietnam!
Thanks for reading through all of her updates.  Now you get to read about her scams!

SCAM
There was a slight drizzle as we embarked from the shuttle at the entrance to our hotel in Hanoi, Vietnam.  We were immediately surrounded by women attempting to sell us $1 dollar ponchos.  We all politely declined and walked on.
After unpacking, I returned outside and the six vultures quickly descended upon me again.  This time I was only holding my camera encased in a wallet, an umbrella and my requisite Pepsi.
One asked if she could exchange her one’s for a twenty.  I willingly obliged as she counted out the money in her partner’s hands. (Remember my hands were full.)  She slapped down a ten then counted out ten ones and handed them to me as I gave her a 20 in return.
Another lady then said, “Oh, me, too!”  We repeated the process and they thanked me profusely.  I walked off feeling proud that I was being so nice.  Later, back at the room, I discovered they had only given me the ten one’s in each case!  One demerit for me.  And, of course, they were all long gone.  Please note that $20 for them is way more than one day’s wages.
BAM
In Ho Chi Minh City (Saigon), population 9 million, there are over 3 million people on mopeds.  They not only drive over all the streets with no stop lights to speak of and absolutely no street signs at all, they also drive and park all over the sidewalks.  One has to get used to walking in the obstacle course as pedestrians have no right-of-way anywhere.
I was on the edge of the sidewalk talking pictures which aforesaid camera encased in a wallet.  The wallet had a silver ring with a lanyard encased around my wrist. I was being savvy by now! 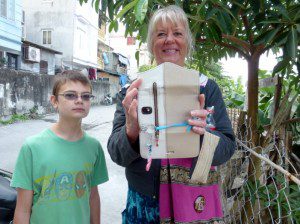 Within half a second, a man on a moped whipped right by me, grabbed my wallet and was on his merry way.  I was so stunned, my arms were still in the air with the silver ring dangling from the lanyard still around my wrist!  Alan went with me and I purchased a $150 temporary replacement.
BAM
Undaunted, I was still determined to take pictures of the city.  Four days later I was again on the sidewalk, but this time, no purse, no wallet and grasping the very small phone with both hands against my chest.
I, once again, saw a motorcycle quickly swerve towards me with a lady driver and male passenger.  He not only grabbed the phone, but drug it up my chin and across my face all in a matter of about 1/10th of a second and they, too, didn’t even slow down!
These people are professionals.  He did not even have time to communicate to the driver.  They were totally in sync.  I did get another very, very cheap replacement; however, took no more pictures until we left Saigon forever!

Note from Heidi:   She forgot to mention the we tried to do due diligence and report the theft of her first phone.  We were told we could find tourist police near the market.  We walked over to the market and found this nice man (tourist police).  He tried his best to inform us where we needed to go.  He even wrote the address and directions on Gma Bev’s hand, but we couldn’t read it.  Oh well. 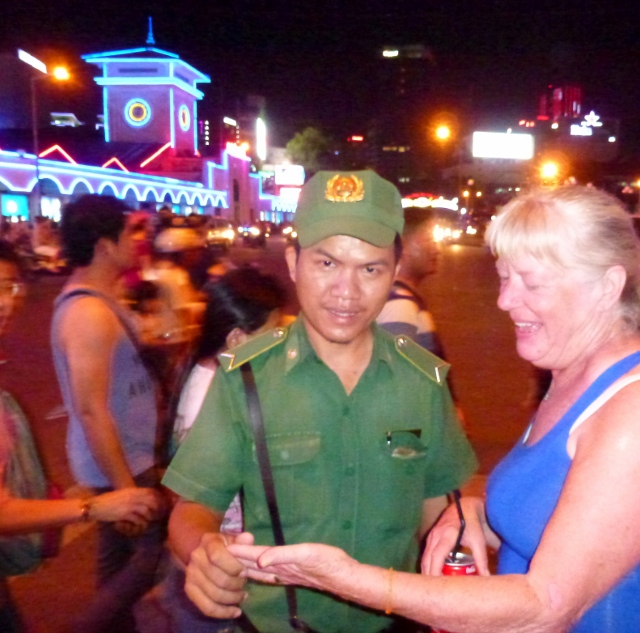 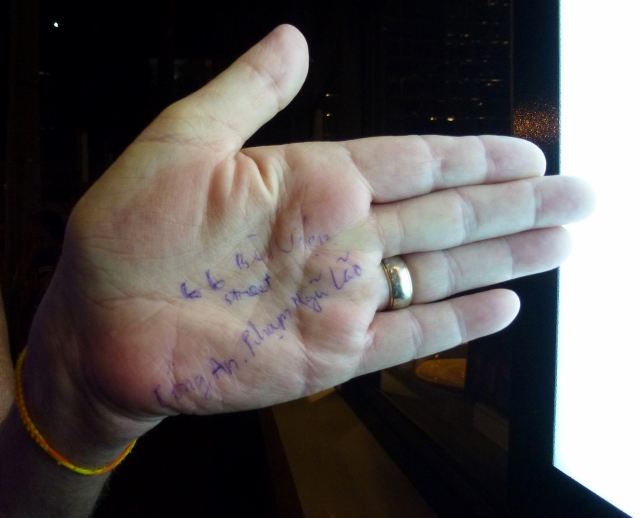 She also made some good friends in Saigon, so it wasn’t all bad.  We stayed at the Bali B Hotel in District 1 and here are some friends Gma Bev made along the way. 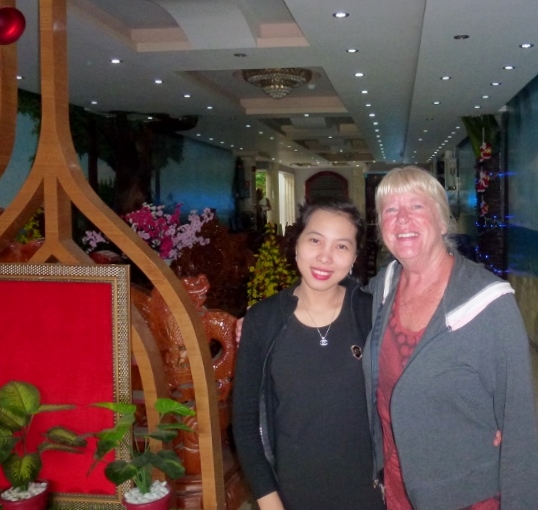 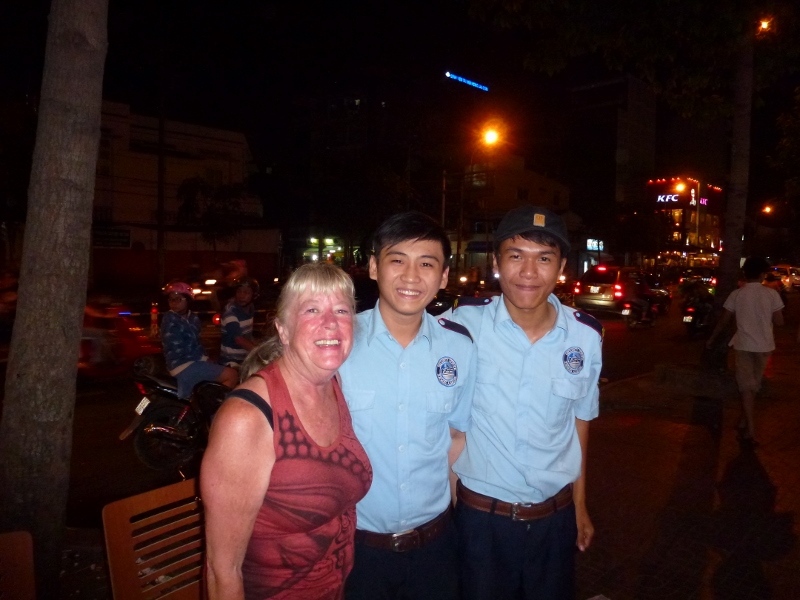 Well, there you have it. Luckily she wasn’t harmed in any of these situations, but she could have been.  Let’s just say she has been far more cautious since this all occurred and she welcomed Cambodia with open arms.

We are doing our best to capture it all for you, as we know you are curious.  Thanks for following along, we really appreciate it.  Please feel free to ask any questions or tell us what you think in the comments below.

6 thoughts on “Gma Bev’s Shenanigans In Vietnam – Scams Too!”