This is a post that I’ve been putting off for a long time.  Why?  It’s not a particularly pleasing topic, but it’s one that needs to be covered.  Heidi and I knew the place was going to be a bit rough, but wanted to visit it anyway.  As a tourist, it’s easy to see all of the fun stuff.  Beaches, cities, waterfalls, and the like are worthwhile but in this post, I’ll cover the UXO Museum we visited. 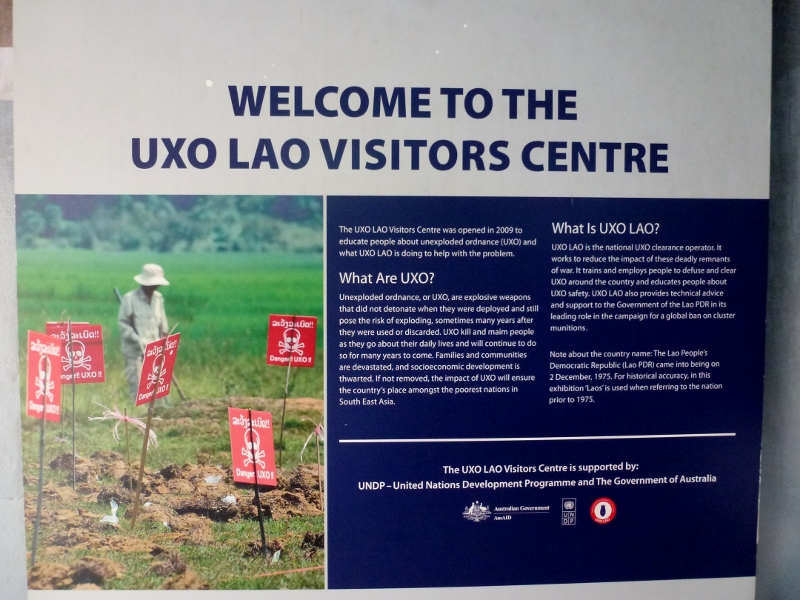 If you don’t know, UXO stands for UneXploded Ordnance.  That’s a military phrase for unexploded bombs or mines.  You probably see where I’m going with this.  The short of it is this:

This bombing was kept secret from the public, with military officials, as well as the President of the United States, stating that there was no U.S. presence in Laos.  I could compare the similarities of the past, to what is going on now, but that’s not what this post is about.

All of that ordnance that was dropped during those nine years makes Laos the most heavily bombed country per capita in history.  Obviously, many villages were destroyed, lives lost, and hundreds of thousands displaced.  But it’s the ongoing toll that brought us to visit the Lao National Unexploded Ordnance Museum in Luang Prabang.

Unfortunately, a significant portion of the ordnance dropped across Laos never detonated. Cluster bombs (a big metal casing with hundreds of bomblets) are the biggest risk to communities in Laos.  Here are a couple of typical scenarios:

This has taken place over the last 50 decades.  While U.S. kids are being taught to look both ways before crossing the road, Lao kids are learning to not pick up metal balls or go in unmarked fields.  Pretty sad, huh?

The purpose of the UXO LAO organization is to educate, as well as remove the unexploded ordnance.  The staff member at the museum informed us at present, about 1 person a day is impacted in Laos by these. Statistics from their site:

“Around 12,000 UXO-related accidents occurred since 1973. Data gathered by UXO Lao in areas where it operates in from 1999 to present, show 934 casualties, divided into 655 injuries and 279 deaths. Data indicate more than 50% of the victims are children and more than 81% are male. Bombies are the most common cause of accidents.  Please note that UXO Lao only receives reports of UXO accidents in areas it operates in. Actual UXO accidents nationwide may be more than this.”

The biggest risks listed by the UXO LAO are:

While we were there, we saw all of the above ordnance, and watched videos of how the UXO had affected a person, family, and community.  It was pretty hard to see the aftermath of these unexploded munitions.  It is a small place, but makes a very big impression.

If you do visit Luang Prabang, it’s a worthwhile place to visit.  As an American, it makes me ashamed of what my government did, but we need to remind ourselves about this, and to not let it happen again.  I don’t know if Anya really understood the meaning of it all, but it definitely affected Lars, and we had a good talk about it on our walk home.