Continued from A Day Trip To Gibraltar – Part I

In the last post, we had just arrived in Gibraltar.  Getting in was very easy, and not too time consuming.  Now we were on our way to the Upper Rock Nature Reserve.  Getting around a (less than) 3 square kilometers was pretty easy, and we made our way to the admission gate without any problems.


Side Note #1:  One of the things you get used to here in Spain (when you’re not completely fluent in Spanish), is that when you go to buy something, or you know you’re going to interact with a local, there’s a bit of a tense-up.  It’s not major, but at least for me, I try to plan my conversation ahead.  It makes it easier for me that way.  Heidi may be different.

Heidi needed to get out of the car to pay for tickets.  And guess what?  They spoke English!  Now I know you knew that, but when you get used to hearing Spanish, it can throw you a bit when you hear English.  She got back to the car and said, “I actually understood everything they said.”

With our tickets purchased, we drove up up up the hill, and past some monkeys (macaques), and then we hit a dead end, and had to turn around.  We were close to St. Michael’s Cave, so we decided to park and walk.  A few of us were a bit hungry (I’m not naming names), so we decided to have a small snack.

Our daughter was walking down the hill with a bag of Cheese Puffs.  I warned her that she needed to finish eating before we got to the monkeys, because if they saw she had food, they would steal it from her.  I’ve seen America’s Funniest Home Videos enough to know this.  We packaged up the food, and put it in the backpack, and went to say “Hi” to the monkeys.

Side Note #2:  I love my mother-in-law Bev.  And she knows it.  But I will confess that for a split-second, I thought of playing a joke on her.  Only a split-second.  I was thinking that it would be a great video if I grabbed some of those Cheese Puffs, and threw them on her while we were near the monkeys, and then watch as the bedlam ensues.  Again, a split-second.  And since I’m being all honest, and confessing, I actually chuckled out loud at the thought.  Come on!  That would have been absolutely hysterical!  Plus the $250 I could have made from the AFHV people would have been icing on the cake.

But I didn’t do it.  I just thought about it, and laughed.  Next time I come to Gibraltar, I’ll bring someone I don’t like that much and a full bag of Cheese Puffs, and I’ll take video.  I promise. 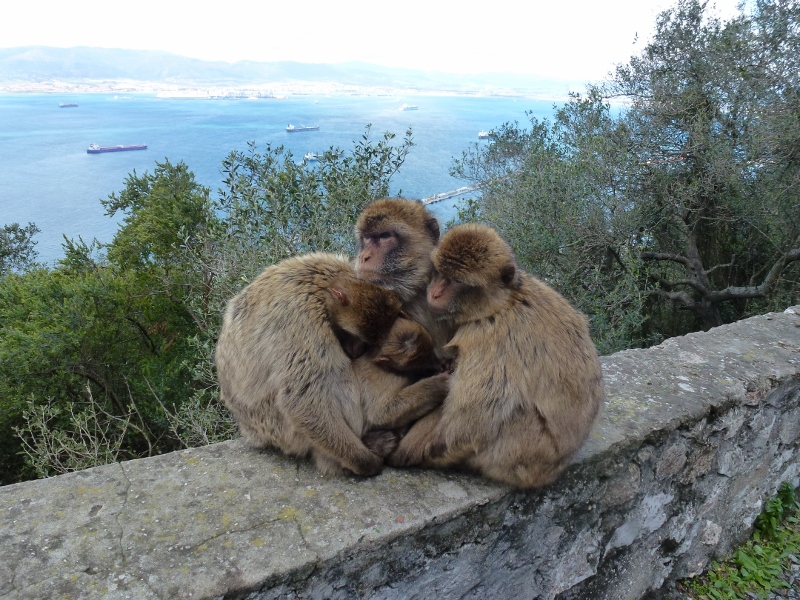 These little monkeys are adorable when they’re doing their monkey thing.  They look at you with those human-like eyes as if to say, “You got any food?”  Sometimes it was a little creepy, but they can run around the trees/ledges like nobody’s business.  As we were walking to the next attraction, the adolescent monkey followed us a bit, and then went to visit another group of people coming down the street. 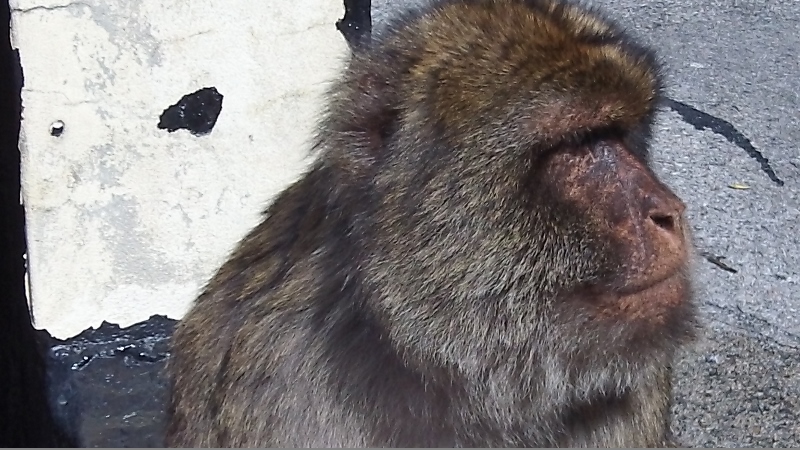 Our next stop on our walk up the hill was St. Michael’s Cave. You should definitely click on that link.  I’ll wait.  I have always liked stalactites and stalagmites.  The fact that they take thousands of years to form a drop at a time is just amazing to me.  There was a large cross-section of a stalagmite on display, and the colors were gorgeous. 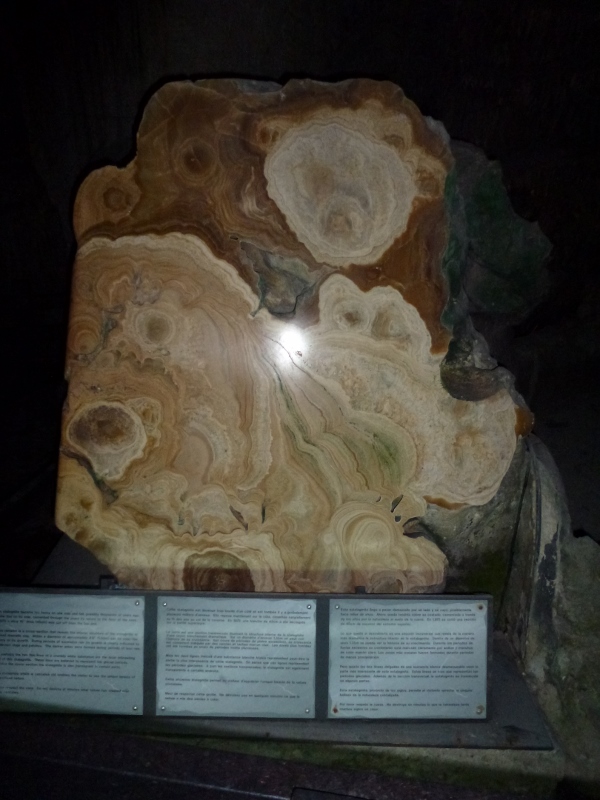 The acoustic properties of the cave are awesome, so I bet a concert or opera would be pretty cool.  I’m guessing the Miss Gibraltar beauty pageant wouldn’t be too bad either.

All this time, the paths had been easy pavement.  Next to the observation area, I saw a path up the rocky slope.  Being the non-conformist that I am, our daughter and I decided to go up.  After all, there’s no sign telling me we can’t go up.  I assumed that Heidi and/or our son would follow after us.  Some of those steps were brutal.  One of them was about a third as tall as her, but she shinnied her way up, and we got to a very cool emplacement.  You could tell where they had mounted weapons on the floor.  There was also a small network of tunnels and rooms. 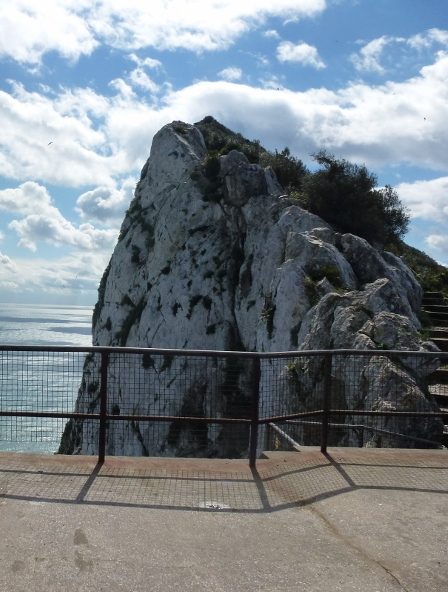 At this point, we’re only about 15 feet from the highest point on The Rock.

After admiring the view, we slowly made our way back down to the observation point, and walked a bit further up the road to see the other family of monkeys.  They have an area where they lay out food and water, and there were some monkeys eating.  I don’t know what it was, but the vibe with these monkeys was a lot different.  Granted, there were a lot more of them, and there was a bunch of food around, but they just seemed a bit more aggressive.

At one point, our son is a few feet in front of me, and we see a large male monkey walk away from us with his goods hanging out.  He shoots me quick funny look that only a ten-year old son can give, and to be adult about it, the only thing I could think of to say, was, “Yep.  That’s a male.”

Heidi was doing some filming when I see a big male walking up toward her.  He had the bearing of one pissed-off monkey.  So what does Heidi do?  She gets out of his way!  Seriously, he looked like he wasn’t going to take any crap from anyone.  After that show of dominance, we wondered if Bev was bored, and made our way back down to her. 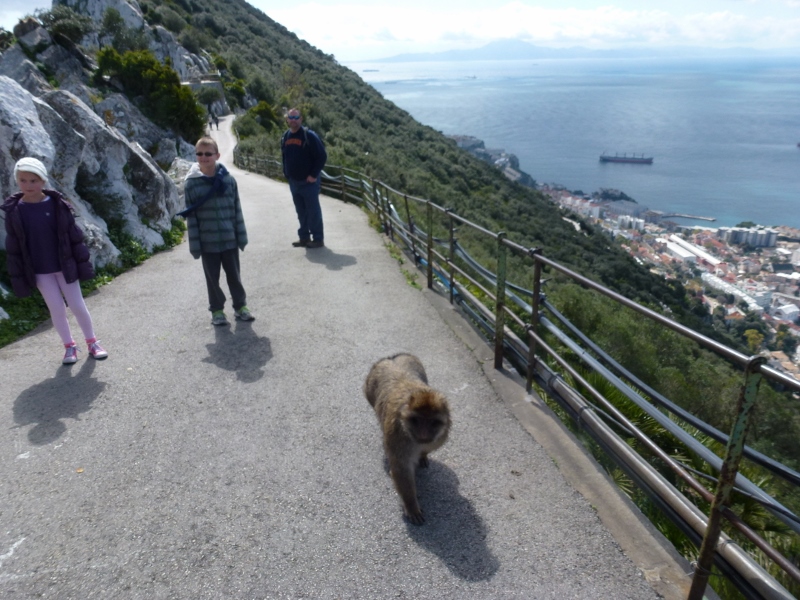 We found her, and she had a great story.  I’ll let her tell her version of the story.

Once we were all back together we continued on to the Apes’ Den which is another large feeding area and lookout.  Heidi dropped us off, and went to park the car.  We didn’t see much in the way of monkeys, so we walked down to where Heidi was parked.  It turns out that Heidi had a new friend.  There was a monkey sitting on the side mirror. 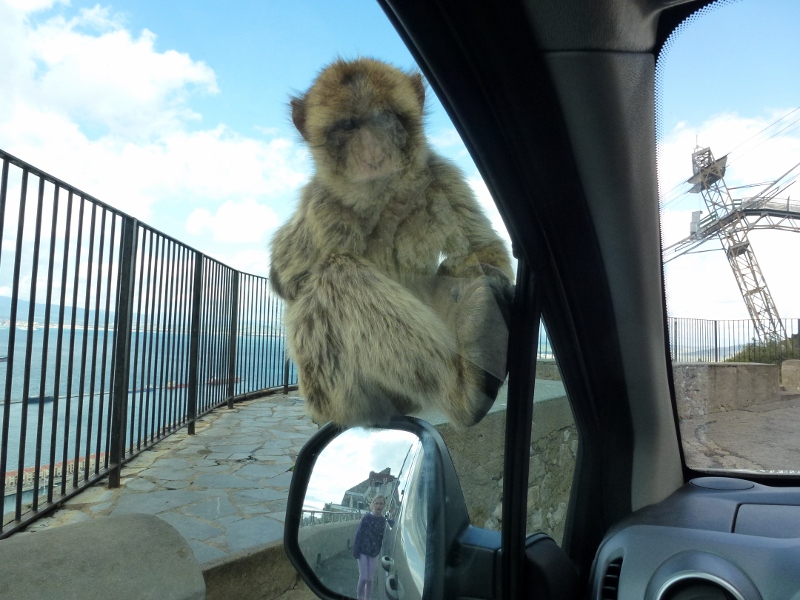 After being reminded not to feed the monkeys by one of the Ape Management people (risking a £500 fine), she was worried that if she opened her door, the monkey would climb in and go nuts in our car.  I didn’t check our insurance policy, but I’m pretty sure we’re not covered for “interior damage caused by a monkey”.  So, he just sat there.  Looking at her.  Staring her down.  I called out to Bev and the kids to quickly get in the car, and then I hopped in myself.  Once I was in, he crawled over our car to my side, and sat on my side mirror.  Staring me down now.

After a few moments, when it was apparent that we weren’t going to feed him, Heidi started up the car, and inched forward.  “Shoo monkey” doesn’t really work.  So Heidi went a tad faster.  At about 5 m.p.h., I started worrying that the monkey was going to fall off, and hurt himself.  I didn’t want to break a monkey (that’s like 10 years bad luck), and just as I was going to tell Heidi to stop, he adroitly jumped off the car and on to the ledge.  Problem solved.

The Great Siege Tunnels were made by the British at the end of the 18th century to fend of the Spanish and French.  It’s pretty amazing the work that went into carving out the tunnels.  Not to mention how they got the huge cannons up there.

I’m thinking that they must have had some short people in the “old days” because sometimes there was enough room for me to stand, and sometimes, not so much.  As a rule, I don’t like walking around places where I may bash my head into the ceiling, so I waited back at the car while the rest of the (shorter) family continued on. 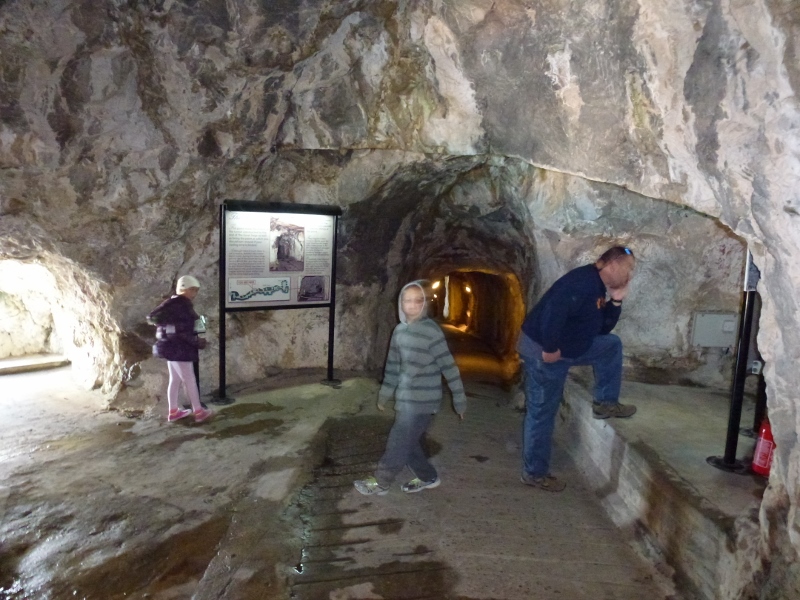 After the tunnels, we had covered a lot of uphill and downhill ground, and we were ready for a change.  We had read/heard that shopping in Gibraltar is great.  There’s no VAT (sales tax), so there’s all these great deals, so on and so forth.  The big shopping area is off Main Street, so we decided to park the car, and check things out.

It’s a charming part of town, but as we’re not big shoppers, it wasn’t really such a huge deal for us.  We went into shops here and there, and found some stuff that we remembered from our days living in London (Ribena, Cadbury Flake, etc.).  One of the things I miss about England is being able to go into a pub and getting a really good Chicken Kiev with some pub chips (french fries).  Yum!  So as we were walking by the numerous restaurants/pubs, I was on the lookout.

One of the last places I looked at had it, so we stopped for a meal.  Bev was hankering for some fish and chips, so she ordered them to go.  How was it?  It was OK.  Not the best, but decent.  After eating, we were all on the mellow side, and decided to head back to the car.  On our way back to the car park, we stopped at the multi-story mall, and looked around.  While Bev was wandering around, I found a puzzle book of the variety that she likes, and some Cadbury Eggs (love ’em!).

After an enjoyable day exploring Gibraltar, I was wondering what it would be like to go back through the border crossing.  I think we timed it correctly, because even though it was about a 35 minute wait, we beat the rush.  The guard glanced briefly at the passports, and waved us through.  Once again, pretty painless.  We were on our way back to our hotel room for some dinner and relaxation.

Another great Day Trip on the books!