Yes, it’s another first for me in Thailand.  One of my birthday gifts was to get a massage; my first Thai massage.  Now when you think of Thai massage, what comes to your mind?  No, I’m not talking about THAT kind of massage.  I’m talking about the real kind.

Let me start off by saying that this post contains some references to body parts, but since this is a family blog, I’ve done my best to keep it clean.  Having never had a Thai massage, I didn’t know what to expect.  When I think of a massage, I think of a calming environment, and relaxation.  This environment itself was a big room with 8 pads on the ground, and my experience was very…OUCHY. 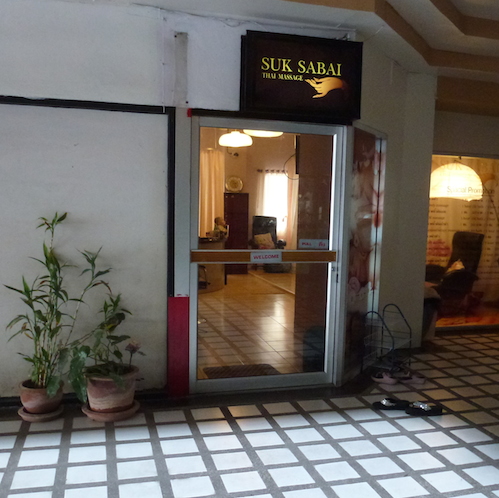 It started out in normal fashion.  I arrived at the spa a bit early, took off my shoes outside, and walked in.  The receptionist, not speaking much English didn’t know if I was having 1 massage for two hours, or two massages for one hour.  After some discussion with a colleague whose English was a bit better, it was determined that I was there for a single massage at two o’clock.

Once the scheduling had been resolved, I was given a glass of nice cool water, and I sipped on it until my masseuse arrived.  While I was waiting, the receptionist grabbed a towel and led me to the back corner, and told me to put on the clothes that she had laid out.  The shirt was very lightweight and very soft.  Unfortunately, it doesn’t matter how soft fabric is, if the garment doesn’t fit.  And it wasn’t even close! 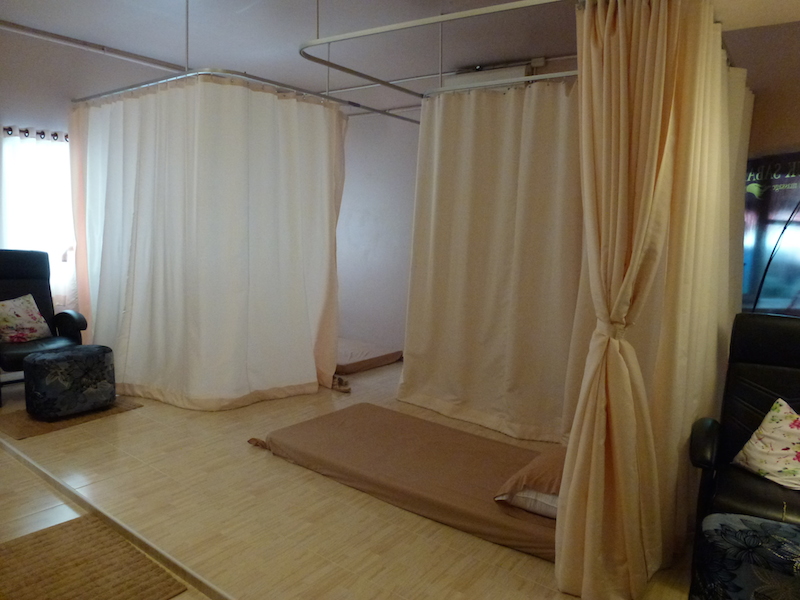 On to the pants.  They were made of the same material, and while they were just a tad short (probably a new record for high-water pants was set that day), I was able to wear them with my own shirt.  I explained to the receptionist that the shirt didn’t fit, and she had a bit of a chuckle.  After getting the attire sorted, a tall man (shorter than me, but very tall for Thailand) arrived, and introduced himself.  It was this tall but wiry fellow who was going to be working on me.

In the previous spas that I’ve been to, the massage table, was off of the ground. This one was on the floor, and felt more bed-like.  The masseuse asked me to lay down on my back, and he used the damp towel to wipe down my lower legs and feet.  Then he got down to work.

As I describe the things he did to me, I can’t be overly descriptive as I didn’t really watch what was going on.  I had my eyes closed, due to either the pain, or trying to get into a relaxed state.

The masseuse started off by spreading my legs, and working his way up from my ankles to the adductors (those muscles on the inside of the legs).  So he’s grabbing and stretching the muscles going up, up, up, and it happened.

His hands were essentially cupping my junk!  When I say cupping, that’s not exactly what has happening.  Let me explain.  Take your hands and hold them in front of you. Pretend you’re holding a ball (snigger) in each hand.  That’s technically cupping.  Now take your relaxed hands (keeping that cupped shape), turn them over, and touch your thumbs together.  Now touch your index fingers together.  See the hole in the middle of your hands?  That was the shape of his hands, and they were totally touching my goods!  Is that a reverse-cup?

I had my eyes closed, but when the “cupping” happened, I let out a bit of a nervous laugh.  I was thinking how the hell am I going to describe this to the readers.  I opened my eyes, and he was looking down at me with an odd expression (and still cupping!!).  I’m sure the contact was a byproduct of where he was massaging, but it was still a bit odd.

I closed my eyes again, tried to relax, and then it was on to the next position.  Once my legs were stretched, he sat down, and put my left leg in a weird position. With my leg out, and knee bent, he was digging in to my calf with his hands while he kneaded the bottom of my foot with his knee!  That felt really weird.  I’m not a foot massage person at all, and was not liking this.

With the bottom of my foot adequately massaged, he threw my entire leg up over his shoulder and was giving it a good push towards my body.  Ouch!  My hamstring was really tight and I could swear I felt some ripping.  One disconcerting thing about the massage so far was that the masseuse was not slow when he would move my limbs from one position to another.  He used really quick motions, like he was practicing his wrestling skills.  Then it was time for the same thing on the other leg.

There was more massaging, more occasional contact with my wedding tackle, and then it was time for me to roll over.  It actually took me a bit to get up.  With me on my stomach, he went to work on my back.  With his elbows!  He was playing my spine like a xylophone.  Up and down my back, and there were several times I was ready to tap out, and call it quits.  I think he could tell when I was on the cusp of saying something, and he would stop.

When he was done elbow stabbing me, probably the weirdest part of the massage happened.  He climbed on me, so that his knees were on my butt, and the balls of his feet were on my calves, and he was rubbing my back and shoulders.  This felt really weird.  With that move (whatever it’s called) done, my massage came to an end.

If I were to draw a pie chart of the experience, it would probably look like this: 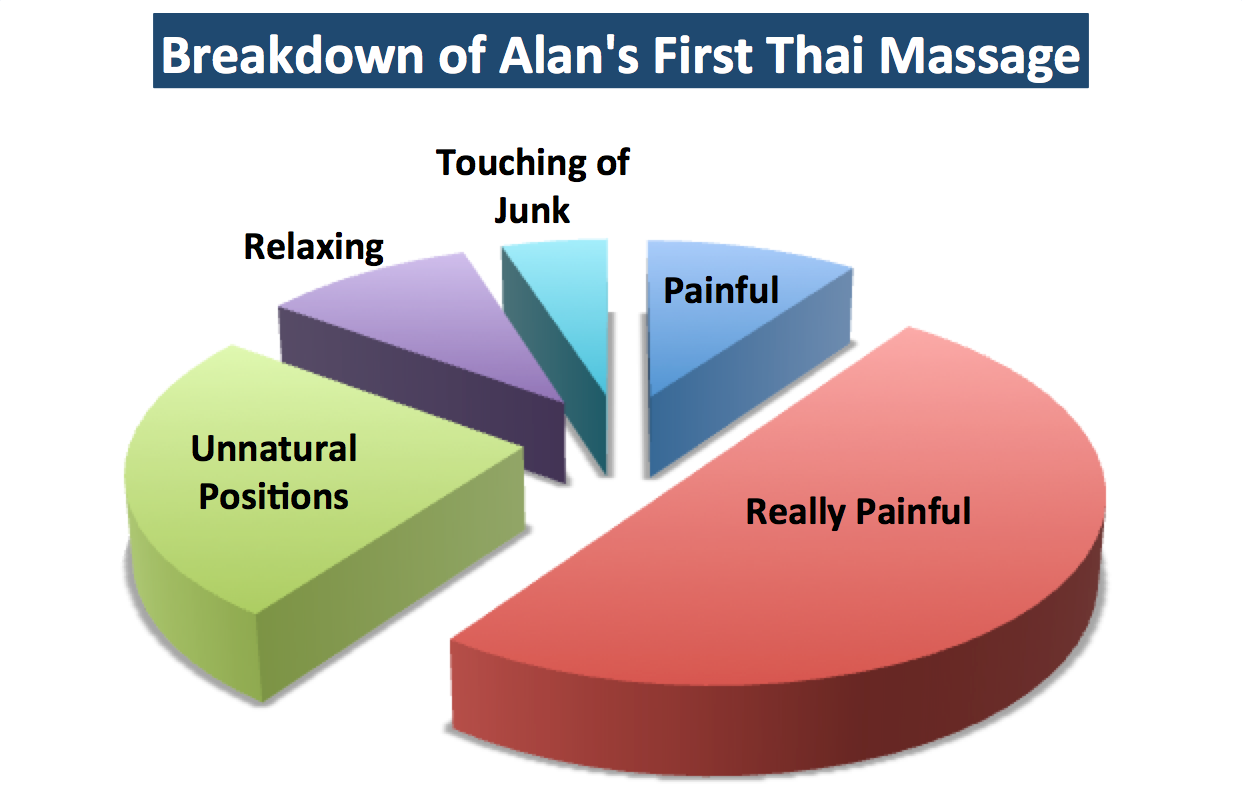 That said, would I do it again?  Yes, I probably would.  I wasn’t as sore as I thought I would be, and it probably helped my flexibility.  I could do without the extreme reverse-cuppage, but I guess you take the bad with the good (or is that good with the bad?).  All of this joy for 150 Baht or just about $5 for an hour, so not too bad.

How about you?  Ever had a particularly odd massage?