It’s that time!  Time for another Scooter adventure and things to do in Krabi Thailand with kids!  It’s Scooter Day around Krabi and Ao Nang Beach!  Today’s journey takes place while we’re back in Krabi Thailand.  This is an action-packed post, so pay attention.  I’d hate to lose you!  (Yes, that’s a not so subtle reference to our last Scooter Outing.)  We’ve learned a few things since last time, and now we’re on the top of our game! 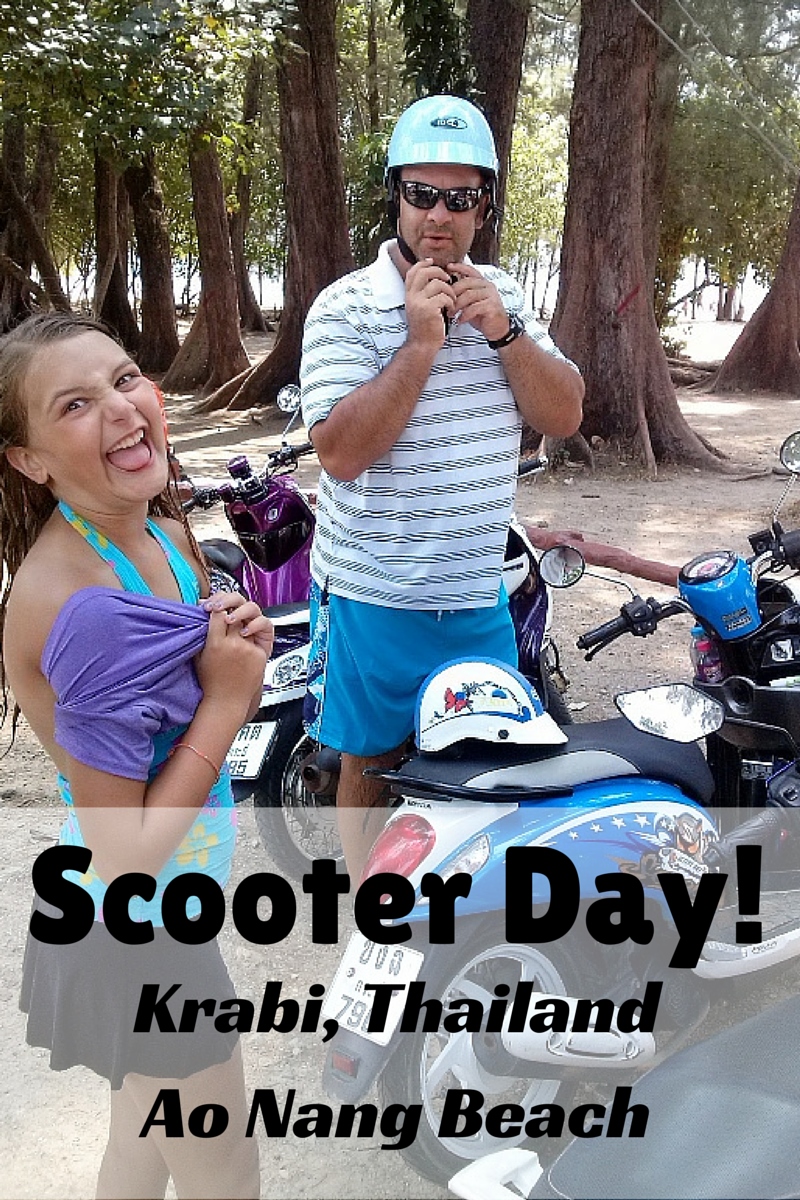 First off, Krabi is interesting town.  I didn’t know what to make of it at first.  It’s a bit touristy, but not overly so, and the locals were nice.  It’s got a strange sort of charm that I liked.

For instance, one fun thing to do in Krabi is to drive around the main part of town and check out the intersections.  They have unique decorations around the traffic lights.  Here’s just one of the ones we saw: 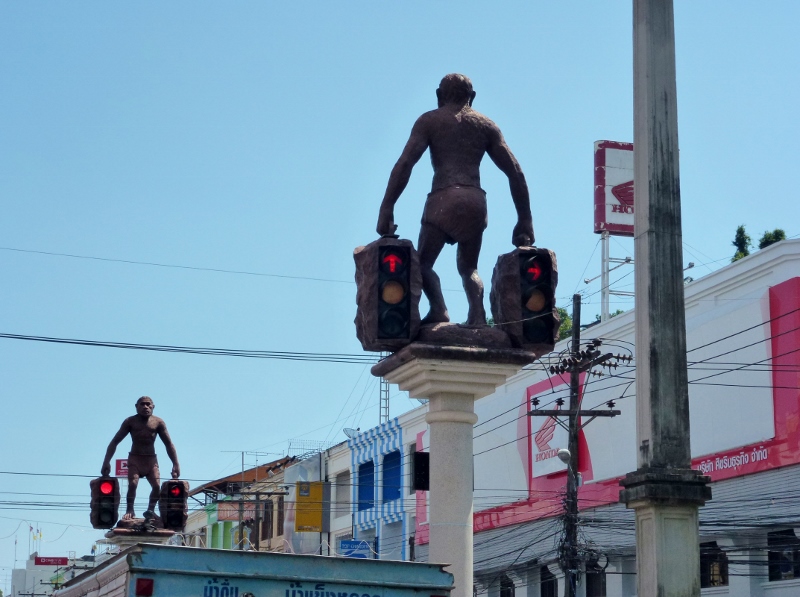 Not something you see everyday, right?  There was a big statue of an elephant holding a sword, another one depicted a huge eagle, and a really mean looking sabre tooth tiger.  These are just a few of the ones I can remember.  By the way, you can’t see any of the Caveman’s “goodies”, so this is kid friendly.

Stop by the local temple, Wat Kaew Korawaram.  We were not dressed in the proper attire to go in, and there was some sort of service or event where most of the monks were sitting.  So, we didn’t stay long, but we heard some monk chanting that was very different from anything we’ve previously heard.  Some parts were almost western as there was a bit of “Doo wop”, so it made me chuckle a little bit. 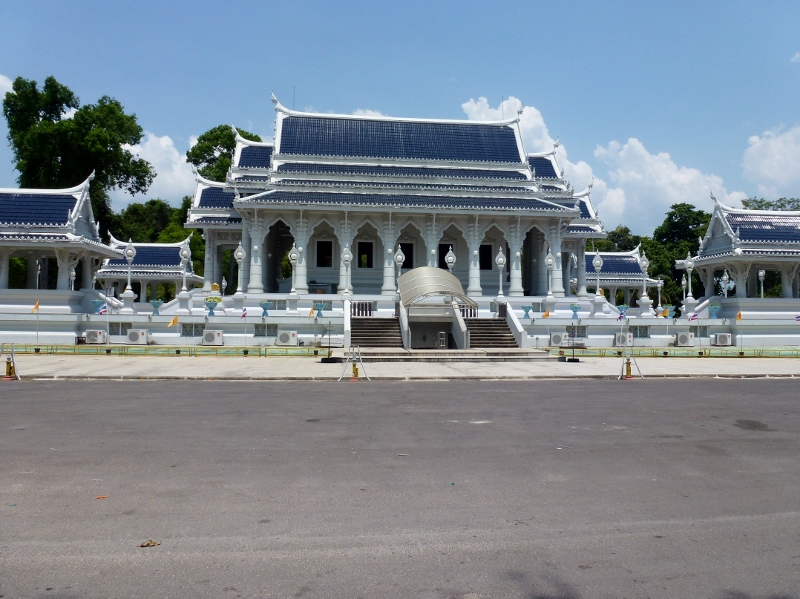 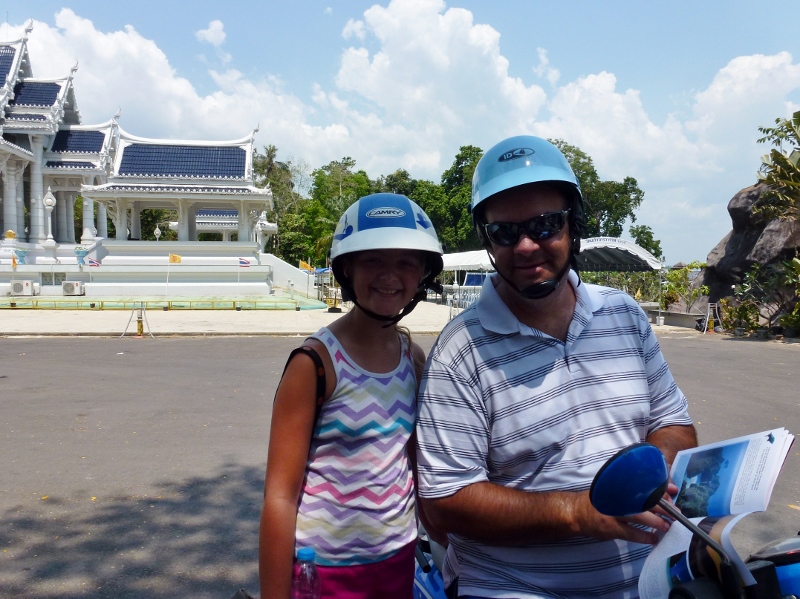 OK, let’s get to the meat of this post.

We rented the scooters!  This was one of our favorite things to do in Krabi.  Time to get our helmets on and enjoy the wind and scooter sounds.  We decided that we wanted to go to a beach, a fellow traveler had mentioned.

Off to Ao Nang Beach

We decided to visit Ao Nang Beach.  It was approximately 20 km away from where we were staying in Krabi center.  That doesn’t sound like a lot, but my butt gets a bit numb on these narrow moped seats, but it wasn’t too bad.  As always, with me was my thrill seeking copilot, Anya.  She’s an excellent passenger, because she doesn’t move around a lot.  It makes for a more enjoyable ride and she likes to go fast!

Sidenote about Tattoos:  Tattoos.  I get it.  Something forever to remember.  But of all things, why would someone want to get a tattoo in Thailand?!  I mean, I love Thailand, but sterile conditions and awesome sanitation is not what comes to mind when I think of Thailand.  Some of the places we saw were definitely professional, while most looked like the owner’s idea of cleanliness was to wipe the used needles on a paper towel.  Someone explain it to me…

Now where was I?  Oh yeah…we’d just arrived at the Ao Nang Beach area, which looked pretty good.  In one area, there were a lot of boats, but there was one section that had a small area cordoned off for swimming. 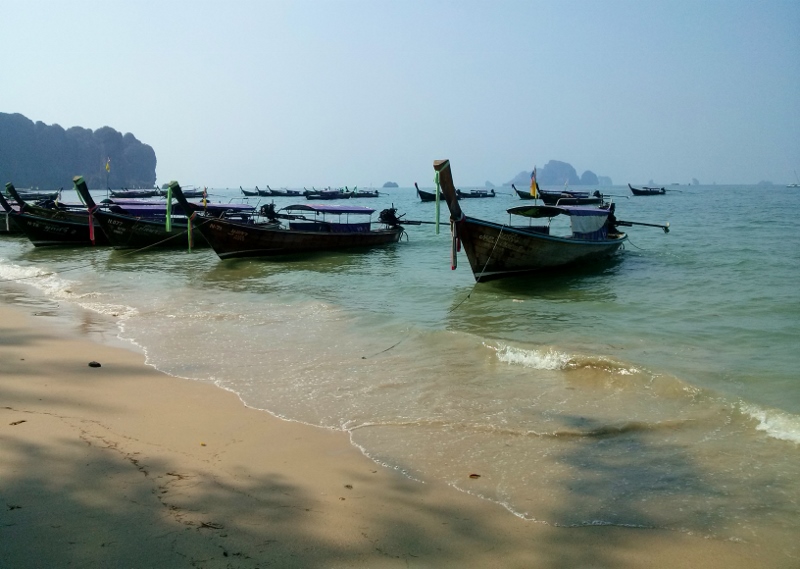 We figured we’d wash off some of the road grime, and cool off, so we hopped in the water.  The kids were less than enthusiastic.  To give them credit, the beach itself was a bit odd, and the area was not conducive to just relaxing, but it was nice to get wet. 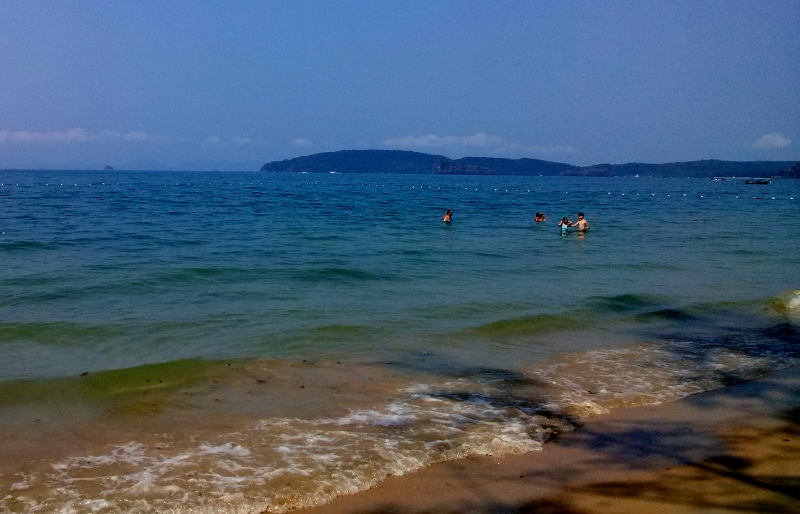 Get a cool refreshment

We were in the water only a short time, when we decided to get something cold to drink, and then do some more exploring in order to find a better beach.  After the drinkage was drunk, and the snackage was eaten, we were back on the road.  We had a general idea that a better beach was a bit further, and boy were we not disappointed.

Dip into the beach again

Another 10 minutes, and we were at a Krua Noppharat Thara.  We parked our scooters, and took it all in.  Now this is what I’m talking about!  A really long stretch of beach with nice sand, and not a lot of people.  Perfect!  I have to also point out that while we’re in this area, we’re seeing these amazing little islands sticking out of the water.  Does anyone know the official name for them?  Help me out here. 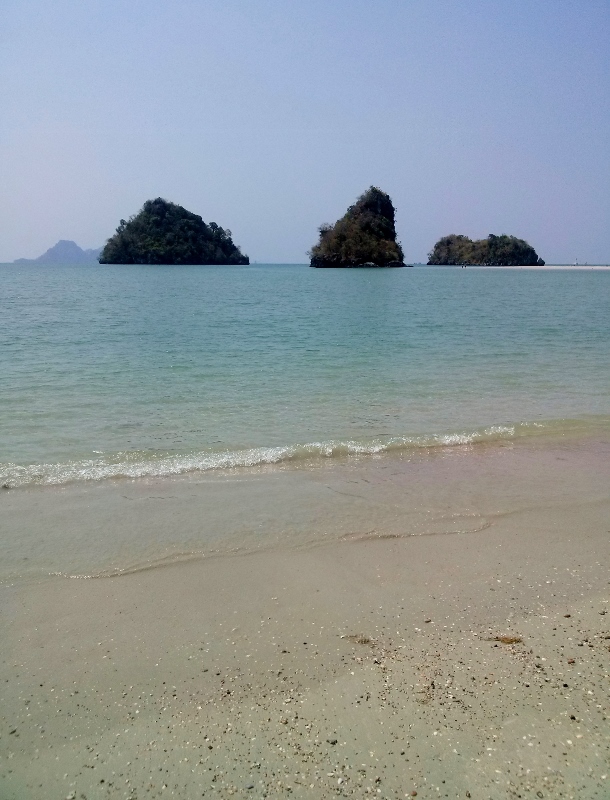 We kept walking, and once we reached the point, we could see a small island, but we would have to cross about 50 meters of water.  I was watching some people who were in the middle of crossing, and it was pretty shallow.  Anya and I decided to forge ahead.  It started to get deeper (about waist-high on me), and I was having second thoughts as Heidi had her camera, and didn’t want it to get wet.  Luckily, it was only a few steps in the “deep” part, and then it started getting shallower.  Whew! 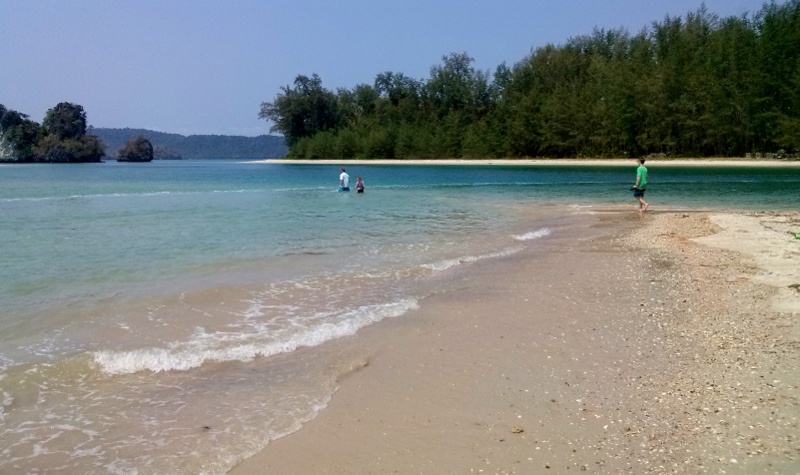 We all crossed, and since the island was so small, Anya and I decided to walk around it just to see the entire thing.  There was the occasional tourist sunning themselves, or enjoying the water.  Once we were roughly three-quarters of the way around the island, there was a wide open beach area.  Heidi and Lars were bringing up the rear, and once they arrived, everyone hopped in the water.  It was a fantastic temperature, and very clear. 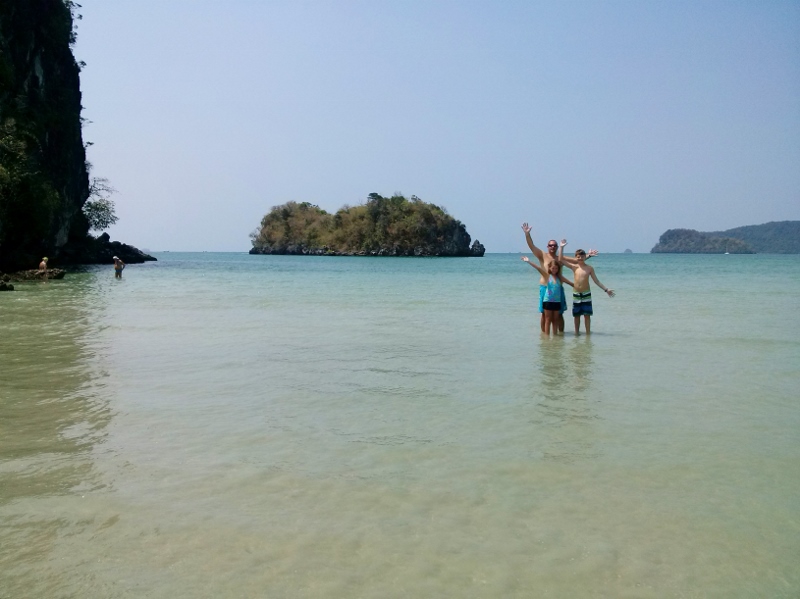 More time in the water

We made our way to another of these little islands.  There was no beach, but we were able to get out of the sun, and look at the trees and vegetation growing.  We talked to a couple who had made it around most of this small island swimming.  They said the water got much deeper and choppier on the windward side, so we opted not to go around.  This was such a relaxing experience.  I wish we could have spent more time there, but it was getting a bit late (we still had to head back), and we had all had a bunch of sun.

With that, it was time to rally the troops, and head back to our scooters, and make our way back home.  Once again, we had to cross the water to get back to the main beach area, but we’re old pros, so that was no problem. 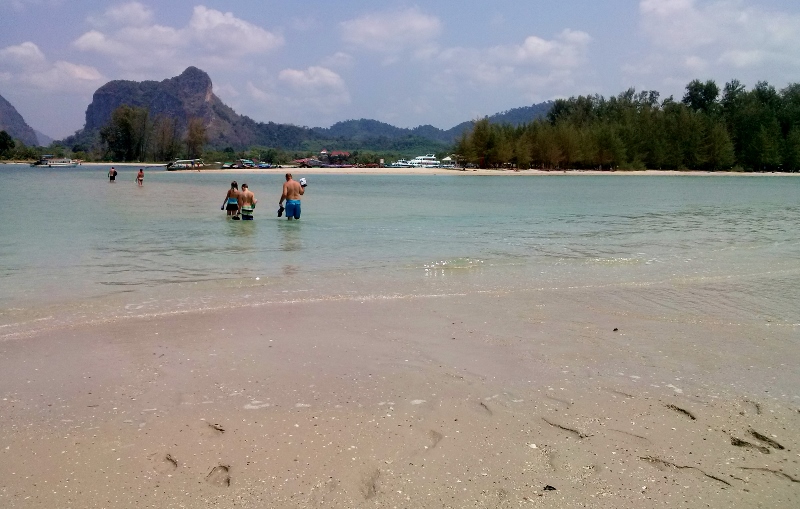 We found our scooters, donned our amazing looking head-gear, and made our way home.  But not before we found some local nourishment.  Chalk up another successful Scooter Day!  Another thing to do in Krabi would have been to stopy by the Ayodhaya Resort Spa, but that will have to be another time. 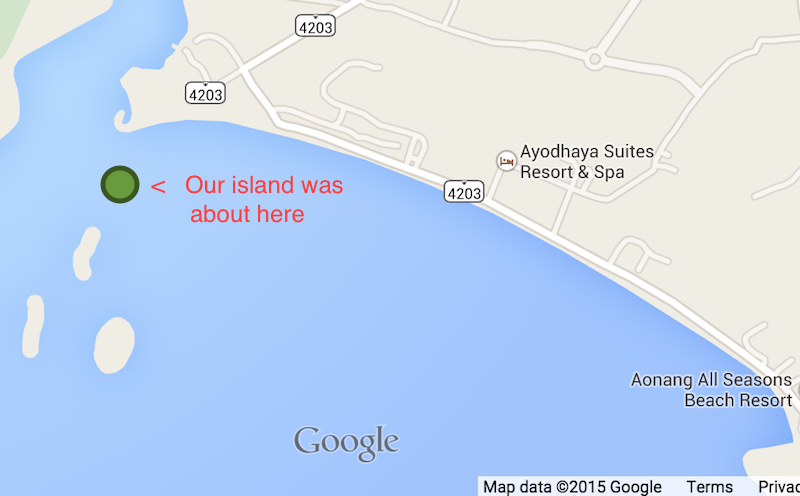 What’s the best Scooter Adventure you’ve ever had?  What things to do in Krabi have you enjoyed the most?

6 thoughts on “Things to do in Krabi Thailand & Ao Nang Beach on Scooters!”