After the super touristy island of Koh Tao, we stayed on the more relaxed island of Koh Phangan.  We were about a 5 minute walk from Haad Yao Beach, and I must say the beach is nice.  Fine white sands, great water; basically everything you would want in an island beach.  Today is going to be a fun day for us because it’s a Scooter Day!  I love these.  Any chance to get on two wheels and zip around is A-OK with me.  Check out our scooter day in Laos, at the Blue Lagoon.

The staff at Shiralea Backpackers Resort recommended a reputable place from which to rent scooters, and it just so happens to be the same place that handled our laundry.  Go figure!  If you do wind up renting a scooter anywhere in Thailand, make sure to check around, and see which companies are on the up and up.  I’ve heard horror stories of companies that rip-off customers.  Some will charge you crazy prices for any scooter problem, even if it isn’t your fault or the scooter breaks down.

With our scooters acquired, and our helmets donned, it was time to get out on the open road.  Since Anya is more a fan of speed than Lars, she rides with me.  She is an excellent passenger.  She is so good that sometimes I have to reach back and touch her leg to make sure she’s still on!  Heidi and Lars like to take it easy, especially on the downhills.  The roads here are not exactly well-maintained, so one does have to exercise caution.

Here’s a map of our entire journey for the most part around the northwest side of Koh Phangan.  I say that because we took a wrong turn here, missed a road there, but we were on wheels and having fun, so it’s all good. 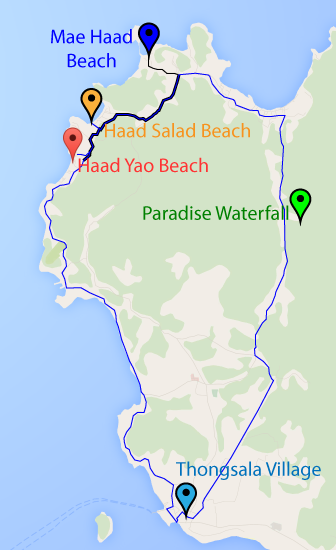 You’ll notice the thick part of the path.  We actually did more than a loop, so we covered some ground that we’d already seen.  Our first stop is Haad Salad Beach.  A very nice beach to do some snorkeling, but we wanted to venture on.   Next stop was Chaloklum, the dip way at the top of the island.  Koh Phangan is far bigger than we thought, but it was gorgeous!

This looked like something we needed to explore a bit more, we went way to the west on the beach. We parked the scooters and walked along the beach for the perfect spot to test the waters. We recently purchased an inexpensive mask/snorkel for Anya so she could learn, and she is taking to it like a duck to water. Along our exploration,  we had to stop and play, because it had…a rope swing! 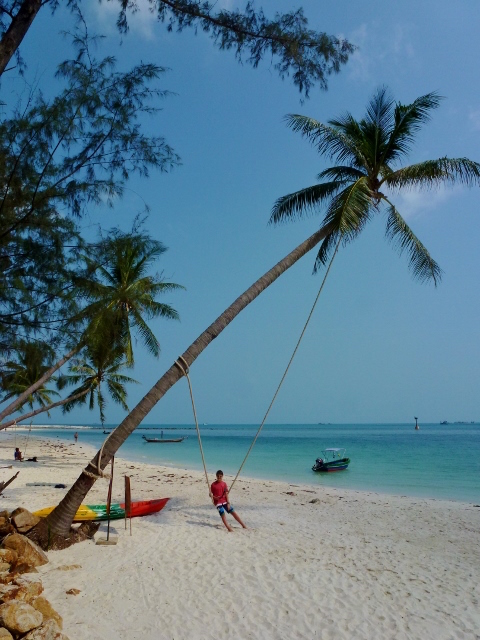 This was a relatively quiet beach with just a few tourists, so it was a nice little break.  As usual, Lars was taking the GoPro around and filming his next epic video (stay tuned!).  Once we were waterlogged, we figured it was time to head out, and see some more of the island.  With no particular destination, we got on our bikes and rode.

Now I have to say, when it comes to getting on two wheels, I’m serious.  I am all business.  This is my scooter game face: 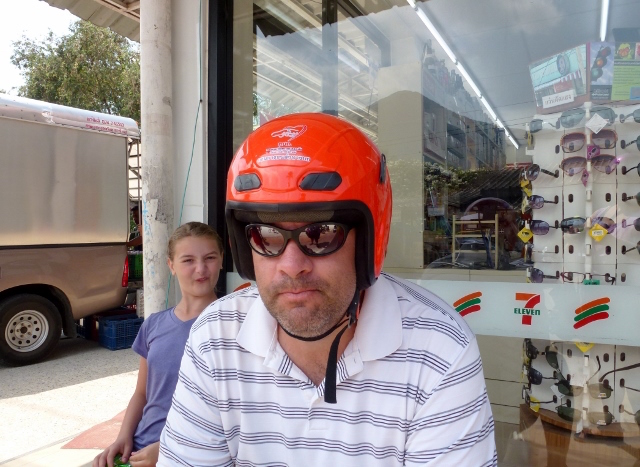 Ignore the crazy girl in the background.  She’s taking away from all that manliness you see before you.  I make that helmet look good!  This award winning image was snapped while we’re figuring out our next stop and hydrating.  Enough talk, let’s scoot!

Waterfalls in Koh Phangan, even in the dry season!

We’d heard that Paradise Waterfall was a nice place to visit, and that there’s a gorgeous view nearby, so we figured we would check that out, and capture a few pics.  It was a bit tricky finding it, but once we there, we had an unexpected bonus.  It’s free!  Heidi loves free.  I love free.  We all love free.  Before our trek up the mountain, the kids decided it was time for a quick pic. 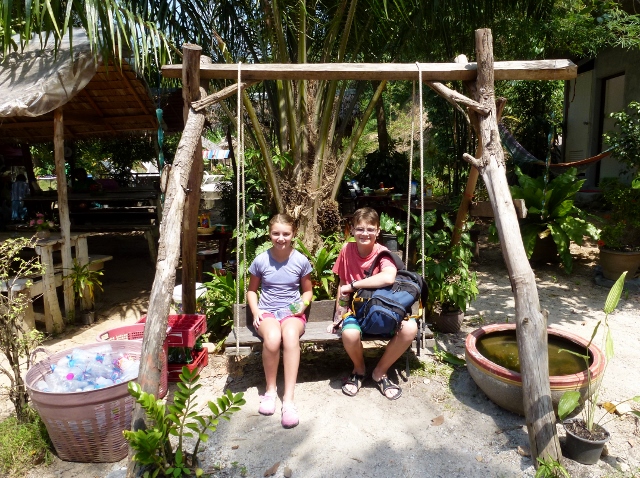 We had been informed that the waterfall was not flowing heavily, it’s not the rainy season afterall, so we weren’t expecting much, but I gotta say that putting my feet into the cold mountain water felt good.  Once again, Anya and I lead the way up the hill, with Heidi and Lars bringing up the rear. 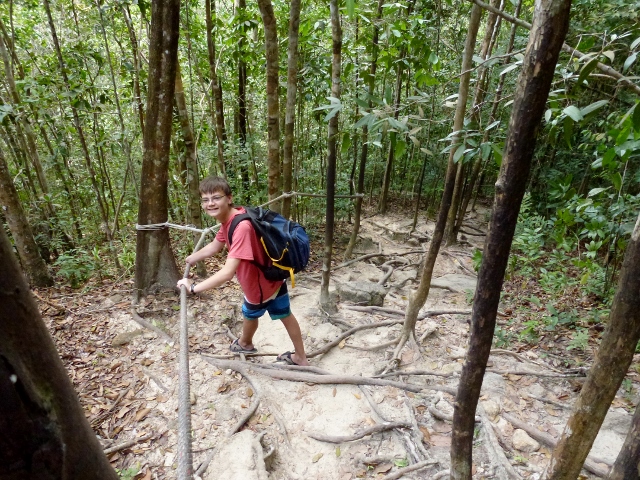 As we were separated, we had to do the occasional yell to make sure we’re all following the same path.  It’s not a difficult path, but all of us were wearing sandals, so it can made the footing a bit treacherous.  (Huffing and puffing!) We finally made it!  I checked with the other climbers, and none of them remembered to bring beer, which was a tad disappointing, but I’ve got to say that the view was amazing. 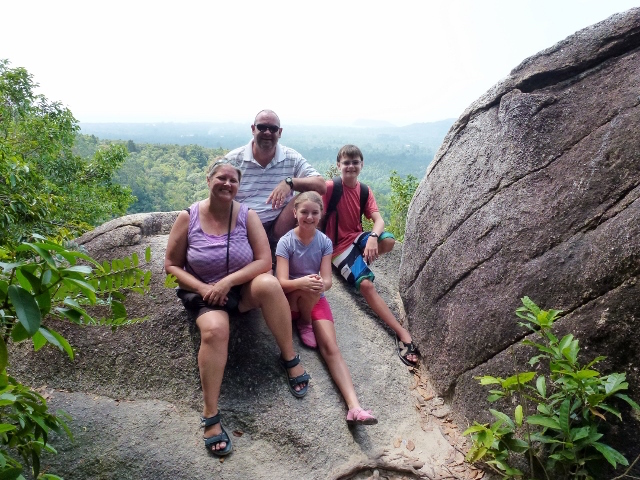 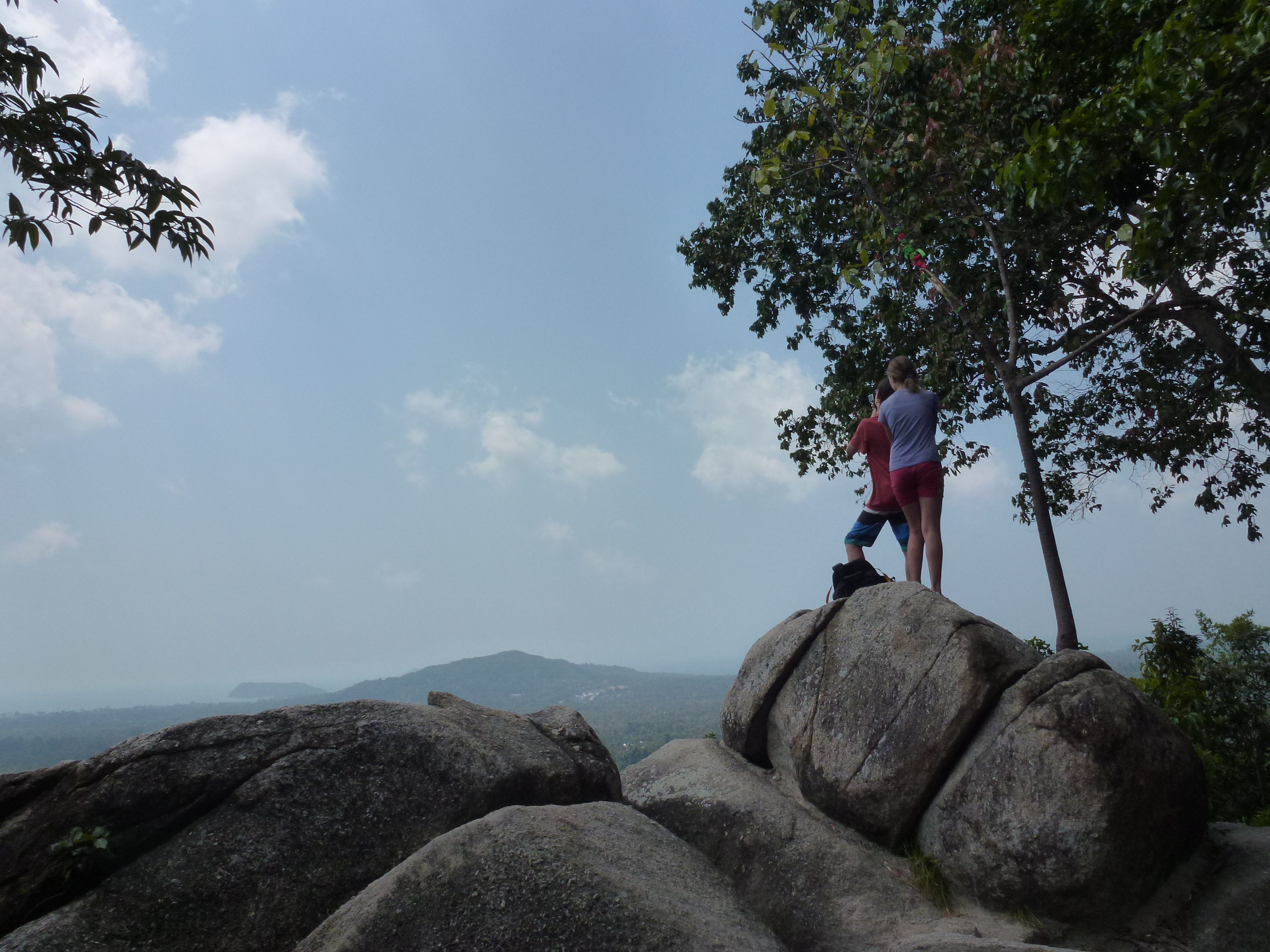 There was no elevator, escalator, nor any kind of “-ator”, so we had to climb down.  Going down in sandals meant we had to be really careful.  We all made it down though, although it took a bit of wind out of us.

Next up on the Koh Phangan Scooter Day!

Our next stop was to get our machines gassed up, and then find some grub for the humans.  We had a nice ride all the way down to Thongsala Village.  This is the village in which we arrived from the ferry, so a few places looked familiar.  It was full of tourist shops and the like, so not really our thing. Time to move along.

Our last stop was way back at the top of the island.  It’s a beach area called Mae Haad Beach.  We missed it our first go-round, but decided it would be a great place to snorkel, and wash off some of that road dirt.  As you can tell from the map, we actually covered some of the same ground as I mentioned before, but it was nice to wind the little scooter engines up.  This isn’t much of a flat path either.  We did plenty of ups and downs as well.

The cool thing about this beach is there is an island that looks like it’s connected to the mainland but it’s not.  If you look at the route map above, you’ll see the blue marker, and a very thin line that makes it looks like the two pieces of land are connected.  Perhaps, when the tide is out?  When we arrived, we saw many people walking in the water about waist deep going back and forth.  There’s also supposed to be some good snorkeling along that line.  Heidi and I relaxed, and let the kids rough-house with each other, while we just swam around and did some quality people watching.

I know I’m done when I get all pruny, so it was time to pack up and leave.  The kids were able to snorkel a bit, and burn off some energy, and it was time to head back to our resort.  Again, it’s not shown on the map, but we got way lost.  We missed a critical right (or was it a left?), and wound up very far south.  I normally have a pretty good sense of direction, but I messed up.  Heidi’s “sixth sense” is better than mine, and she and Lars got lost as well.  Not to worry though as we got some directions from a local, and made it home just fine. 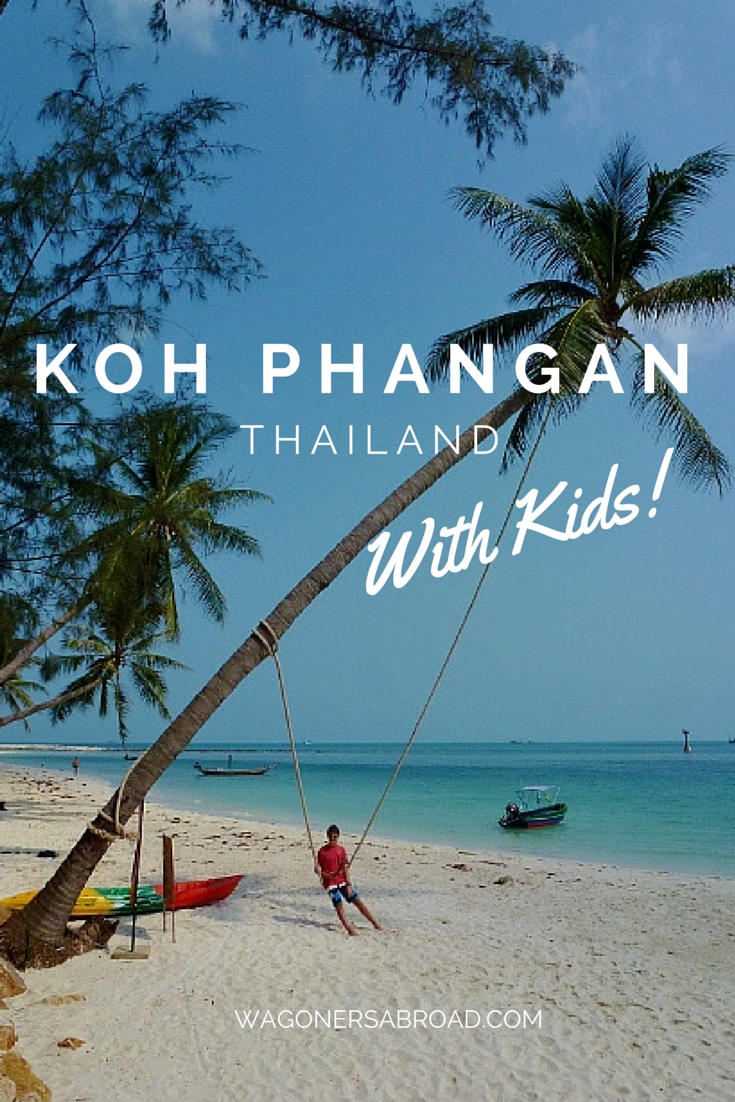 How about you?  What’s your experience with Scooter Days?  Love ’em or hate ’em?