When researching travel options for our journey from Hue to Hoi An, I found there were several choices.  I happened upon the option of a private car versus the bus or train.  I reached out to a few agencies for pricing and within minutes, I had a reasonable price from Hue Private Cars (VM Travel). 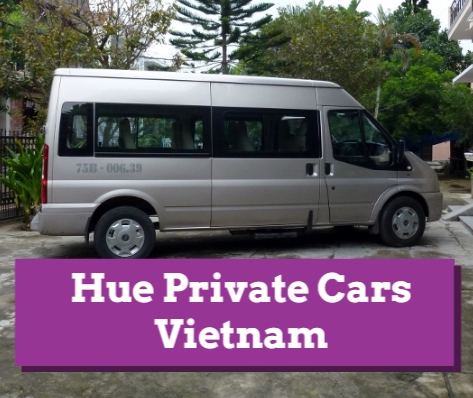 I quickly ruled out the public transit options, even though I was certain the train was the best choice for us.  The price of the bus was least expensive, but it would likely go through the tunnel rather than over the mountain.  This would mean less spectacular scenery.  The train is what we had planned all along, and it was only a few hour journey, but it too would just skim the great scenery.  Having a group of 5 also sways the decisions.  What seems inexpensive for one or two people quickly adds up for 5.  All in all, a private car was going to be about $2 more per person than the train.

With the private car, we would be able to stop when and where we wanted along the way. The driver was English-speaking, and would also point out the sights along the way.  So not only was this private transport, it was going to be like having a half day tour thrown in!

As mentioned in previous posts, we worked our a review deal with VM Travels and our private car was sponsored by them.  So that was an even better deal for us.  Below you will find our review of the day.

Review of Hue Private Cars from Hue to Hoi An

The options for cars were seats for 4, 7 or 14 people.  We had been taking the 7 seat private cars as our airport transfer and they were basically and SUV or minivan.  With all of our luggage, we felt that would be too crowded for a 3+ hour drive.  We opted to select the 14 seat van and go in comfort over the pass.  This would prevent the kids from fighting about someone touching them, rubbing elbows, or whatever.

The driver arrived promptly at our appointed time, with a mini bus.  It seemed kind of silly the 5 of us loading into such a big van, but believe me it was wonderful.  We each had an empty seat beside us, so that kept us all happy.  The driver quickly loaded our luggage and off we went.  He spoke English and let us know we could stop along the way. 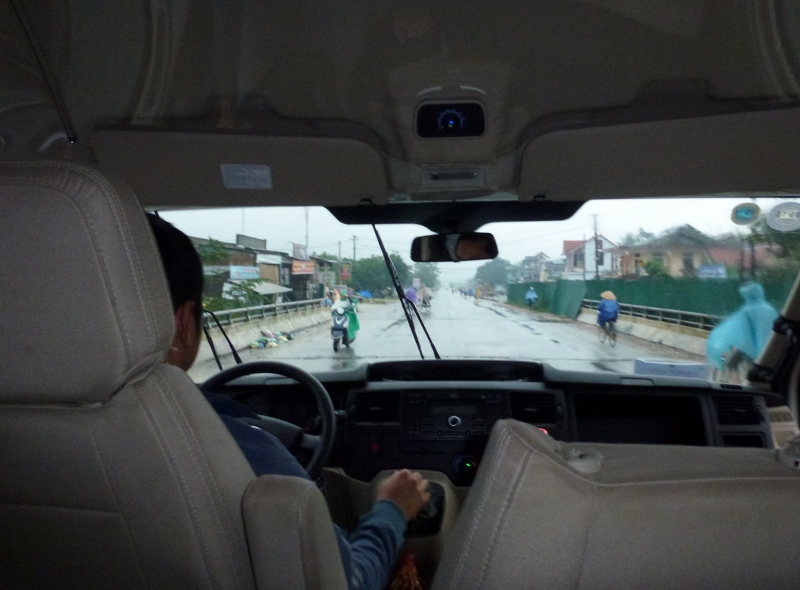 It was pouring rain the day of travel, so it really spoiled the spectacular scenery we expected to view.  Needless to say through the clouds, fog and rain, the scenery wasn’t as stunning over the Hải Vân Pass as we had imagined, but the driver still pointed out all of the sights.  He asked us to let him know if we wanted to stop anywhere along the way and at each sight he offered to stop for photos etc. 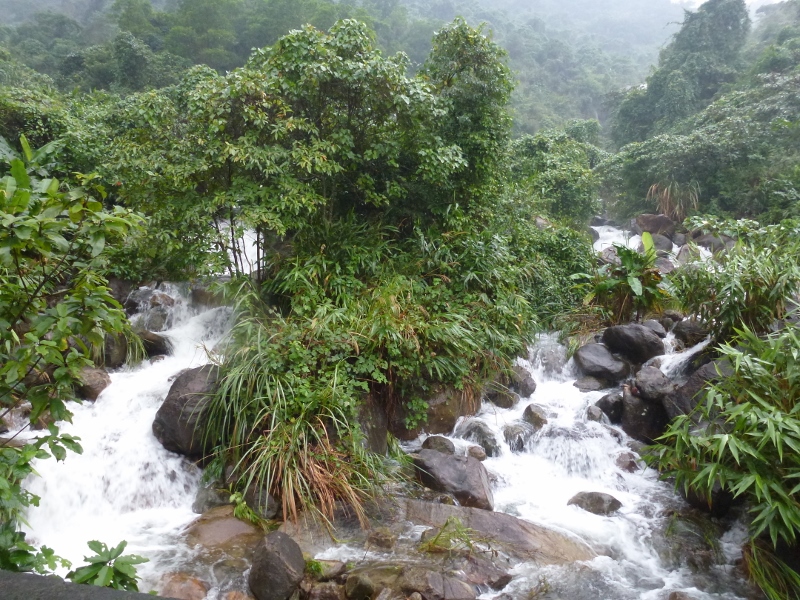 A beautiful water fall, plummeting down from the jungle above the road, passing under the road, to then plummet to the sea. Even though it was raining, we all hopped out to soak it all up.  We managed to take a quick photo as well. 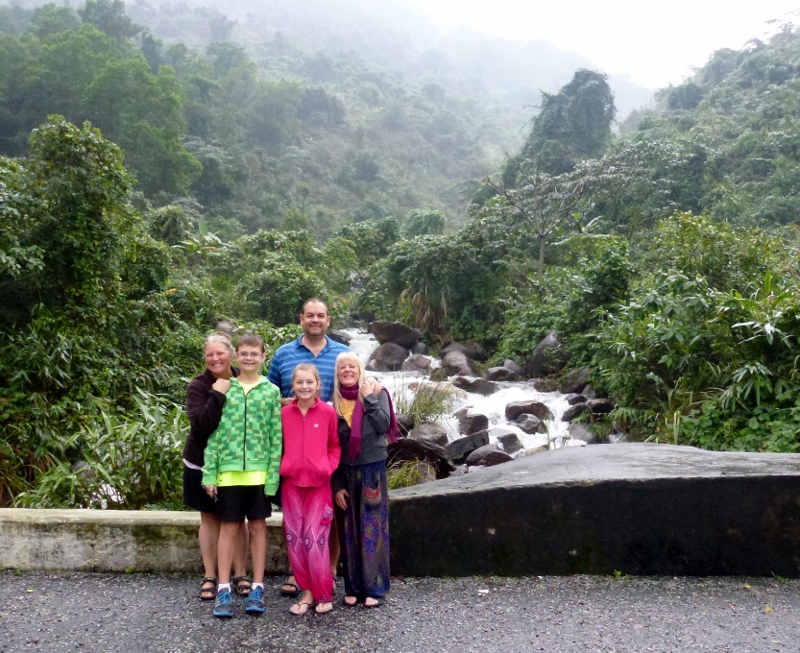 When we reached the peak of the pass, the fog was very thick and it was difficult to see the road.  We stopped off at the shops along the road for a quick toilet break and browse of the local goods.  It was cold and rainy, but within about 10 minutes the fog lifted.  We hopped back in the van and headed down the other side of the pass.  It was a bit easier to see the beaches below on the descend, but it still wasn’t crystal clear.  We soon arrived in Da Nang and we crossed the Dragon Bridge and Marble Mountain.  There are plenty of shops and things to see at Marble Mountain, if you care to stop. 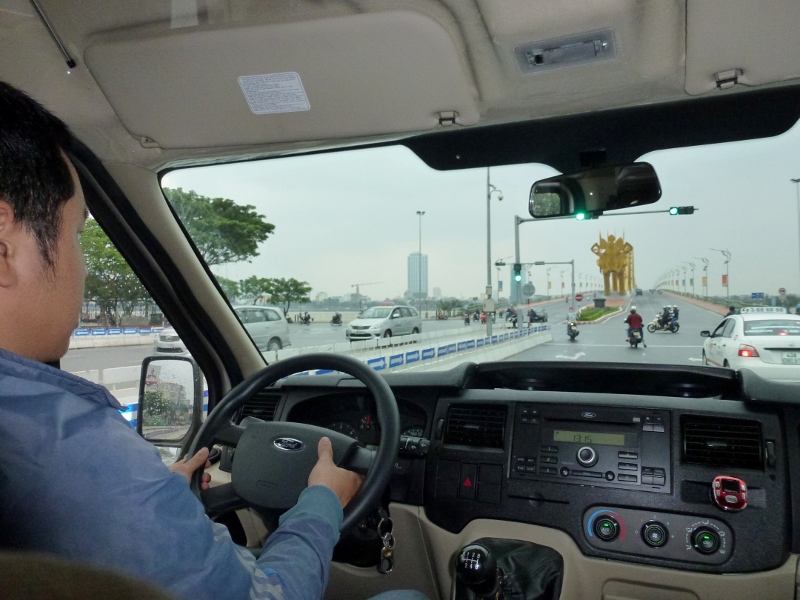 In no time we were in Hoi An.  Wow how time flies when you are having fun!  The driver took us directly to our homestay.  How wonderful to be taken door to door!  With 5 of us (3 generations) it was so easy and I would bet far less stressful than the train or bus.  It saved us from having to hire taxi’s or tuk tuk’s to and from our accommodation in each city.  Not to mention all that we got to see and learn along the drive.  We felt very safe with our driver and he took it easy on the mountain roads for us.  Highly recommended.
Extra tip:  If you have a group of 4 or more, really take advantage of this option.  We priced the train and bus and this wasn’t much more and it dropped us at our hotel in destination city.  That saved on an extra taxi from bus/train station too.  If you are just a couple, I bet there are others in the hotel traveling to same destination.  Group together and share the expense.  It is almost like a one way day tour rather than a private trip.  The driver is full of information about the area and the sights.

Hue Private Cars can take you where you need to go!  You may also book your Tour of Hue, Vietnam, airport transfers, tours outside of Hue, as well as wonderful budget accommodations at Grace Hotel.

Disclosure: Hue Private Cars (part of VM Travels) was kind enough to sponsor our private transport.  All opinions are our own.

6 thoughts on “Living Large With Hue Private Cars in Vietnam”