Heading in to this adventure, while seemingly confident on the surface, underneath I was a little worried.  Worried about how the family would acclimate to Thailand, the food, weather and culture. 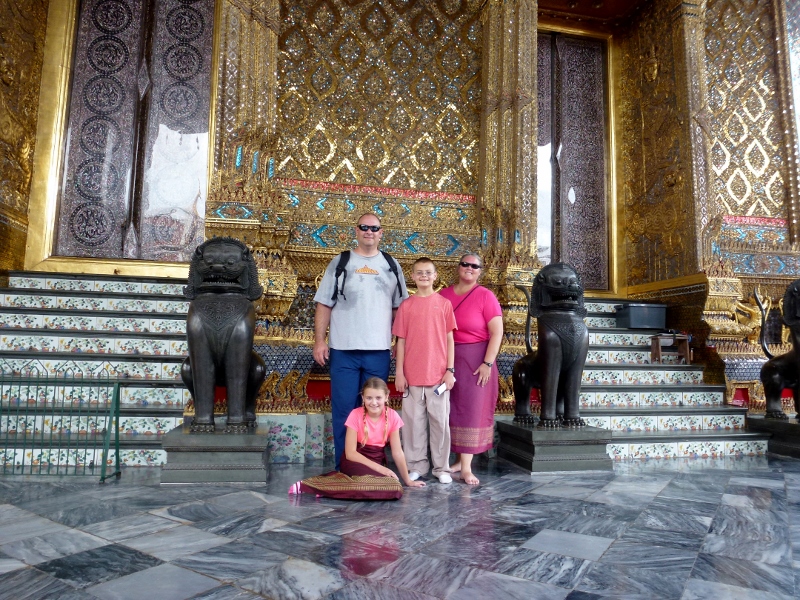 I had visited Southeast Asia 20 years ago, so I was also fearful that my memory wouldn’t serve me well. I also wondered if things had changed so much, would I still be fond of the area.  Even with these thoughts running through my mind, we continued with our plans.  Because it is exposure to those very things, that we were seeking on this journey.   We wanted to test our limits, challenge our comfort zones so we could learn and grow.

We have been preparing the family for culture shock for several months, advising that this would be a journey like no other.  We were stepping into a culture that would be very different from the USA and Spain.  Of course we have visited several other countries, but those are the two we have lived in the most. So with all of this, we have completed out first week in Bangkok, Thailand. 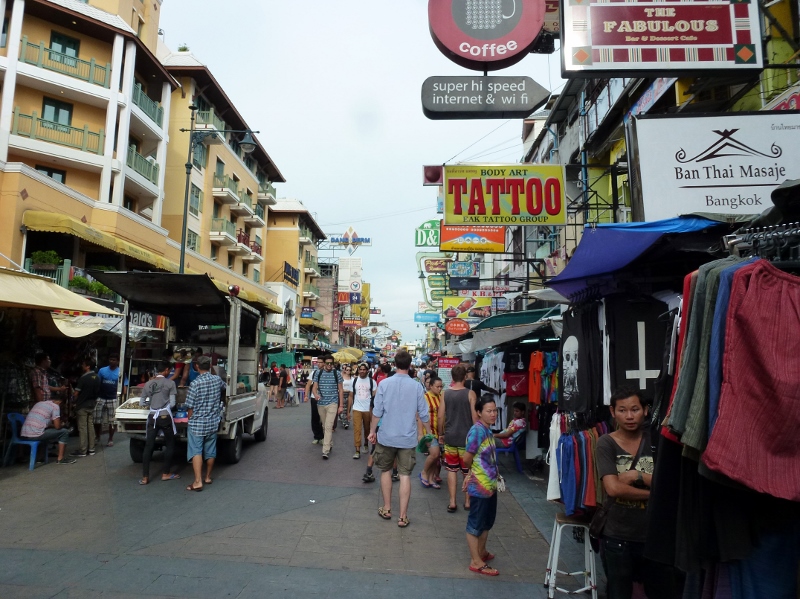 The plan was to stay in Bangkok for 1 week to get used to the humidity and heat, to be exposed to the new foods (with American back up food nearby).  We selected the tourist area off of Rambuttri, near Khao San Road, the backpacker tourist area.  I figured it would be best to be exposed to the street food and other travelers right from the get go.  I didn’t want to tuck away in our own little apartment and have an isolated experience here.  It was time to dive right in and see how everyone did.  Not to mention that anything we want is just out the door.

I have to say, I am amazed as how easy-going and resilient our family is.

As you know we aren’t a big foodie family.  Alan is likely the most selective eater in the family and Lars likes to try most things, even bugs, but still needs some sure things.  Anya and I are middle of the road, we will try some things, but not likely bugs.  Everyone is trying new foods and there has been no trouble feeding anyone. In fact, it has been quite the opposite. We have been excited to try things that are familiar, yet a little different.  Lars of course is going off of the deep end and trying bugs, fruits and more.  More on that coming soon. 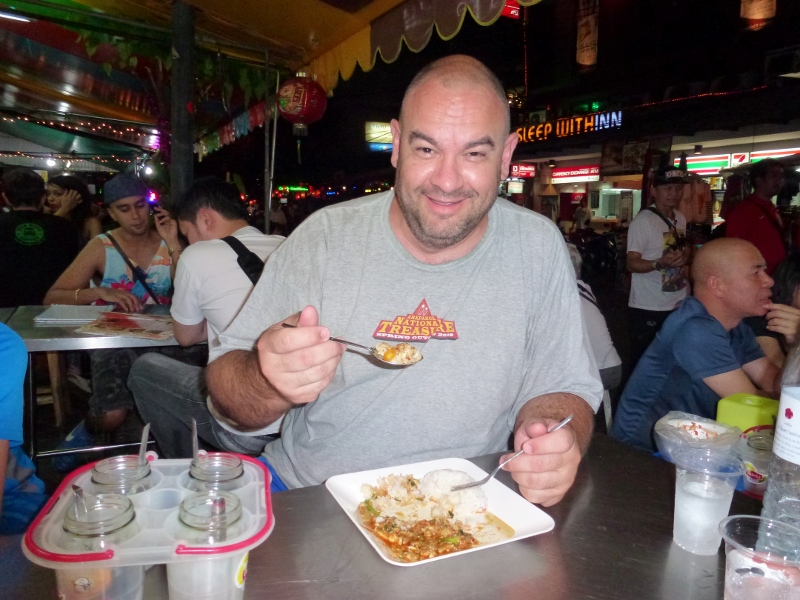 Surprisingly, I am the one having the roughest time.  After cooking every meal in Spain for 2 years, I am having a rough time adjusting to eating out every meal.  Part of it is having to go out when anyone is hungry or trying to keep us on the same eating schedule.  The other part is the budget control freak in me.  There are so many temptations when you are out seeking food while hungry.

We will find our groove and some meals have been far more than that too.  Also, with each meal out, there are those extra temptations of appetizers, treats and more.  I think we have hit the smoothie stand every single day, sometimes twice.  At least that is somewhat a healthy option and for only $1 for a 16 ounce fruit smoothie, I have no complaints.  I just need to get used to our new style. 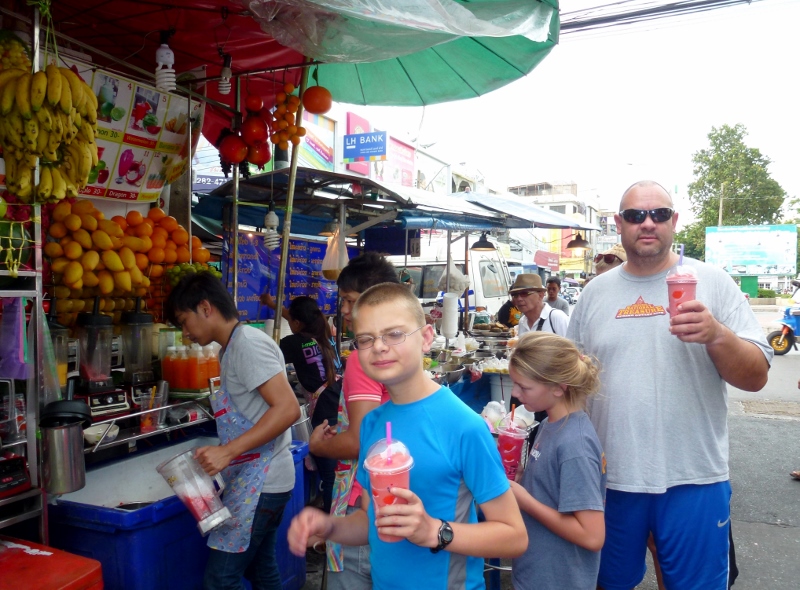 You would think that coming from North Carolina, we would have no problem with humidity.  The heat and humidity here are like no other.  That thick damp air, in which you labor to breathe and you shirt is soaked with sweat, after just 10 minutes of walking.  It is great for the skin and body to cleanse, but only if we drink enough water.

We got off to a slow start staying hydrated, but now we don’t leave the building without that water bottle in hand.  We drink water all day, even when we aren’t thirsty.  After just one week, it doesn’t feel so bad to me anymore.  It is still hot and we are still as sweaty mess, but it isn’t as uncomfortable as it first was.  I am hoping this will be a good slimming experience for me, as it was 20 years ago, but we will see. 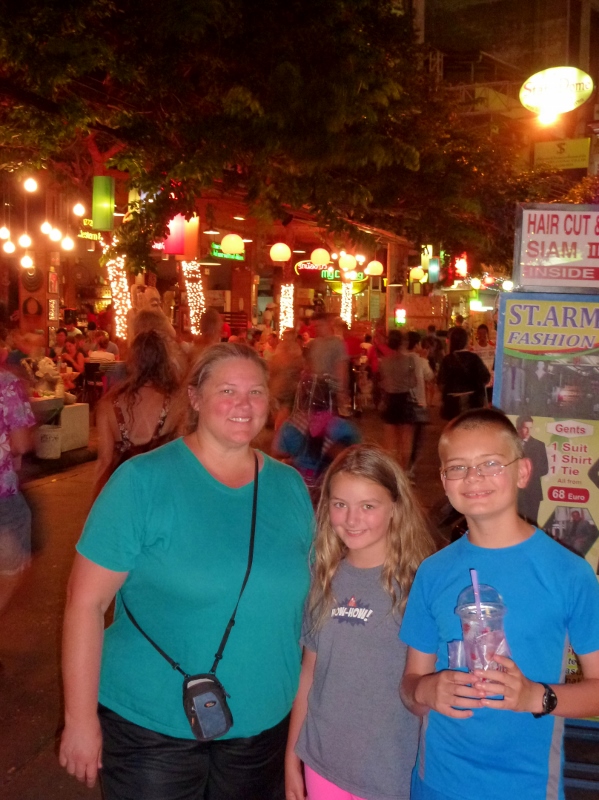 Because it is so hot, we do have the AC running in our rooms. Thank goodness for AC!  Our hotel didn’t have a family room available, so we have 2 double rooms.  The boys have a bachelor pad and us girls are together in another room.  Our room (the girls) was either freezing with the AC on or hot with it off.  There was no in between.  This doesn’t bode well for a good nights sleep.

We have all gotten way off track with any sort of sleeping pattern.  In fact we are nudging it in the wrong direction.  Each night we are up later and then wake up later the next day. So here I am writing at 3 am and I want to force myself to be up by 10am, to try to get back on track.  Yesterday, I woke up the boys at 1pm!  They too were up until about 3am.  Oh and we can’t forget about the rain in our room!

So we aren’t doing well in the sleep department.  Oh well, it isn’t like we have other plans.  We are just missing out on precious daylight hours.  Since we are closer to the equator, the sun sets a little closer to 6pm, not the 11pm like it was in Sweden.  We will figure it out. For now we are just night owls and the city doesn’t seem to mind. 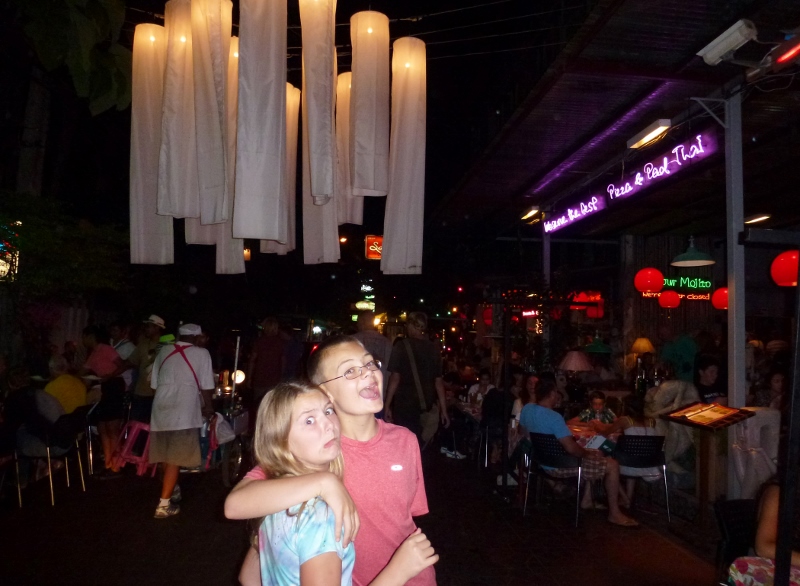 I don’t know what I was so worried about.  Everyone in the family is just going with the flow.  There haven’t been many moments of shock or surprise, but part of that is due to us being in the tourist area too.  We do get a whiff of some odd smell now and again that just turns your stomach, but other than that not bad.  There is one thing that stands out to me is an experience at the Grand Palace with Anya.

We visited the Grand Palace the second day we were in Bangkok.  We hadn’t quite figured out the hydration thing yet and Anya had a bit of an upset stomach, likely adjusting to the new foods and spices.  We were just renting our skirts and pants to enter the palace and Anya had that look on her face of sheer panic.

She quietly announces, “Mom, I have to go to the bathroom now!”  Uh oh, I don’t even know where it is.  We quickly ditch the boys and have no plan to meet back up with them.  We find the nearest staff person to direct us to the bathroom and off we go.  We make it there, accident free, and there was an open stall at the end. Phew! We made it!

It was crowded and hot in the restroom, so I informed Anya I would wait out at the entrance.  A moment later out comes Anya and she didn’t look happy.  That same miserable and pained look was still on her face.

I asked, “Do you feel better?”

Of course I need to know why not, after that mad dash to get there.

She said “I don’t know how to go in a squat toilet.”

Oh my goodness, that poor thing.  (At least I prepped her enough before our arrival that she knew what a squat toilet was.)

I went inside to inspect and sure enough, it was a hole in the floor with to foot pads to stand on.  Ha!  I opened all of the stalls and found 2, at the very end, sporting a western toilet.  Her eyes lit up and lifted her frown into a big smile.  She raced in and the rest is history.

The remainder of the day, she was a bit tired and didn’t feel well.  It was very hot and the day just got the best of her.  Lars is so caring and comforted her, when we found shaded spots to rest.  People were passing by saying “awww” and it was just adorable.  I just had to capture the moment, without them knowing. 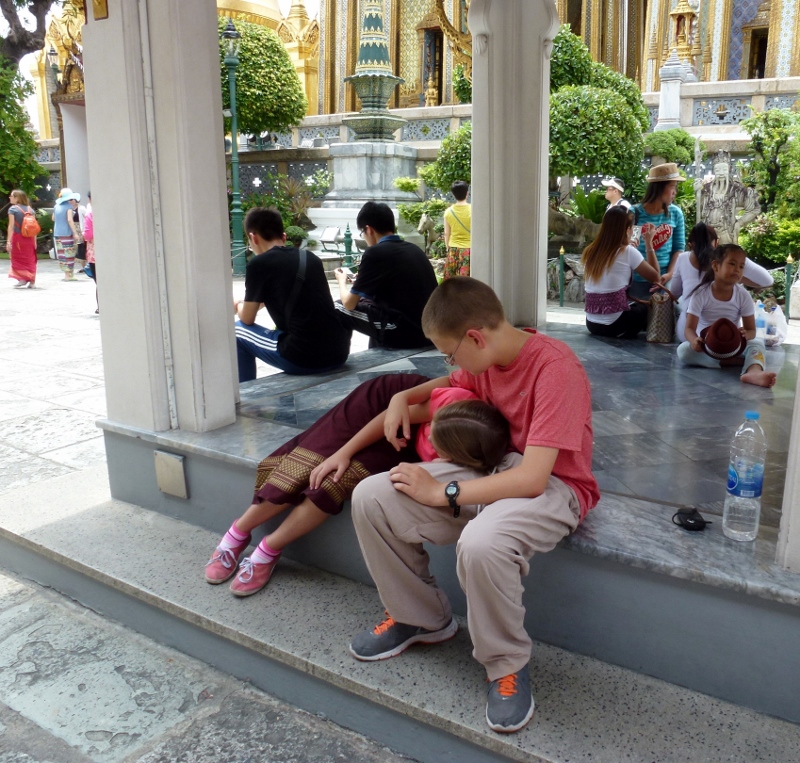 Sidenote by Alan:  I was bitten by a bug!  Not the love bug.  And not one of the myriad bugs they sell on platters here (Ewww!).  I was bitten by a stomach bug!  As stomach bugs go, it wasn’t too bad, but it kept me in the hotel room for a day as I didn’t want to venture too far away from a bathroom.  Even though I’m officially over it, my appetite hasn’t returned, but that’s a good thing.  The money saved by me not eating gives me more money to spend on clothes.  I’m really digging those monk robes!

Other than that, the entire family seems to be fine. Of course I keep asking them and they said I made it sound worse than it is, so it’s not bad.  I am not sure if I embellished too much to over prepare or if we have just traveled to different cultures enough that it just doesn’t shock us as much.  I just remember when I was here 20 years ago, it was a bit of a shock to me.  Again, we are in a tourist area of the city, so this may all change when we get our big kid shoes on and head out to the smaller towns.

Remember to watch the video of the kids our first day in Bangkok.

Next stop: the island named Koh Chang, about 135 km from Cambodia.

Some random photos of our first week in Bangkok:

2 thoughts on “Humidity, Toilets, Critters and More – Adjusting To Thailand”