As you know we spent one week in Bangkok Thailand.  Of course since that was our first week in Thailand, we had to get used to the humidity, toilets and culture.  Lars also stepped up to the plate and ate a scorpion on a stick; please check out the video!  Following our time in Bangkok we envisioned a nice relaxing week or two at one of the islands in the Gulf of Thailand.  The problem was, none of them were going to be a short journey from Bangkok. 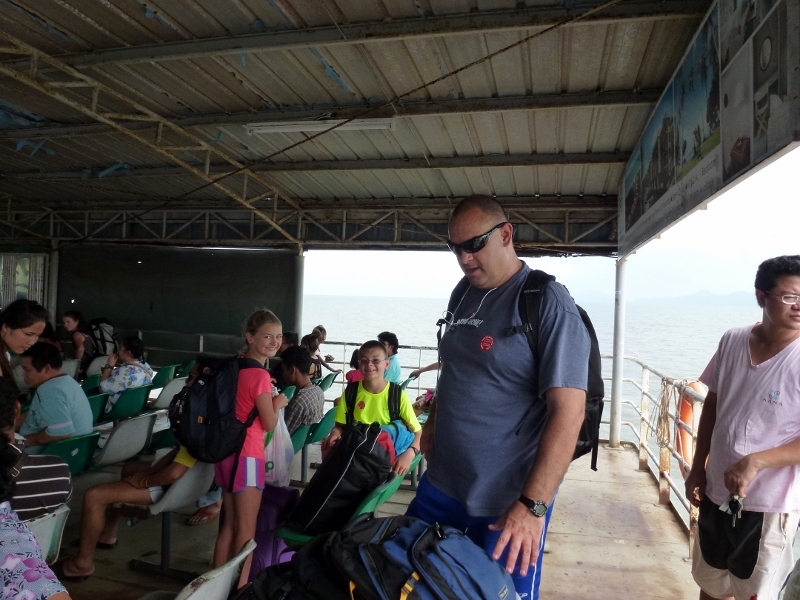 Twenty years ago, I spent some time in Koh Samui as well as Koh Samet.  They were both lovely back then and I have very fond memories.  Part of me didn’t want to taint any of those memories and not visit those exact locations.  The other part of me was very curious to see what it was like now.  Koh Samui was going to be a very long over night journey, and I couldn’t really find any affordable accommodation in Koh Samet.  I thought that was funny, as Mom and I paid about $4 a night each, 20 years ago, for a beach hut.

I researched other islands and Koh Chang kept popping up.  This was a popular backpacker destination, it was closer than the southern islands and it was going to be less touristy.  This sounded perfect!  They did offer beach huts, but with a family of 4, we went the hotel route.  I still stopped to admire the backpacker beach accommodations.  The transportation research began and it seemed there were several options getting from Bangkok to Koh Chang. 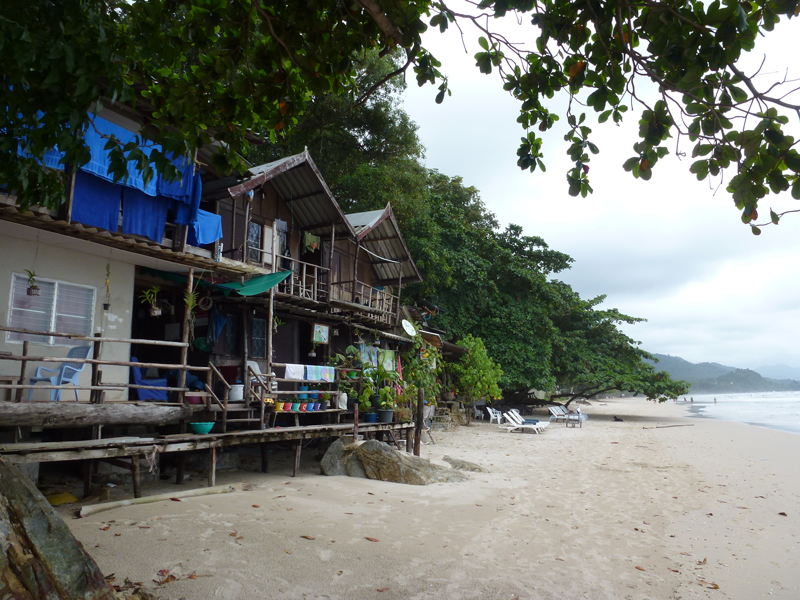 TIP
All of these options can be booked at any travel agent around town or on your own.  We found that the prices varied significantly from one tour / travel agent to another, so ask around.  We opted for the VIP bus and were quoted prices from 300 – 950 baht ( $9.50 – $29.20) per person, for the same exact bus and journey.

We of course opted for the VIP bus and it worked out very well for us.  We each had 2 seats to ourselves, the AC was blowing and there was a toilet on board.  We were loaded up with some snacks and Anya even voluntarily brought out some of her homework!  This was actually a pretty relaxing 6 hours, that is once we actually got going. 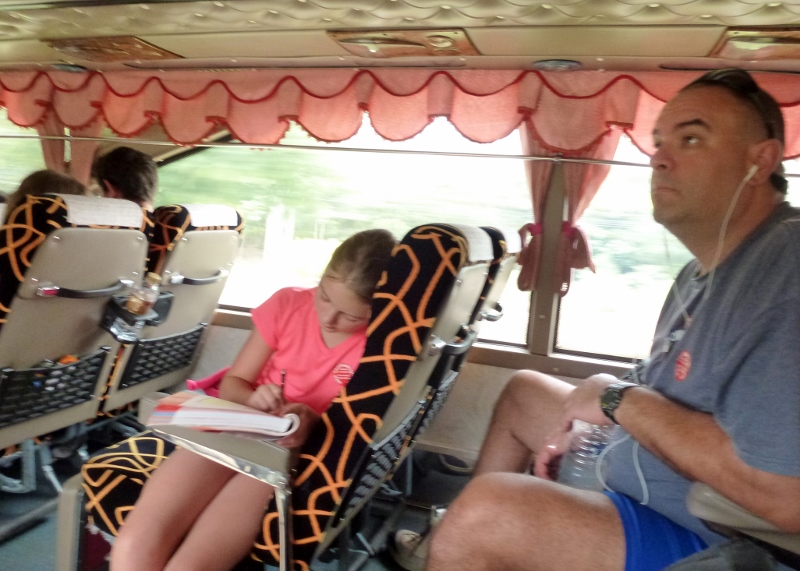 You see they did pick us up at our hotel, but on foot!  The bus was parked several blocks away on a main street.  We all had to lug our things several blocks, but the guide also made stops along the way to pick up others.  It turned out that we walked a huge loop about triple the distance we needed to walk.  That was less than pleasant, but we did finally get on the bus and enjoy that AC.

Like clock work, we arrived at the ferry port.  They offered a little shuttle to take you down to the pier.  We ferried for about 45 min to the island of Koh Chang! 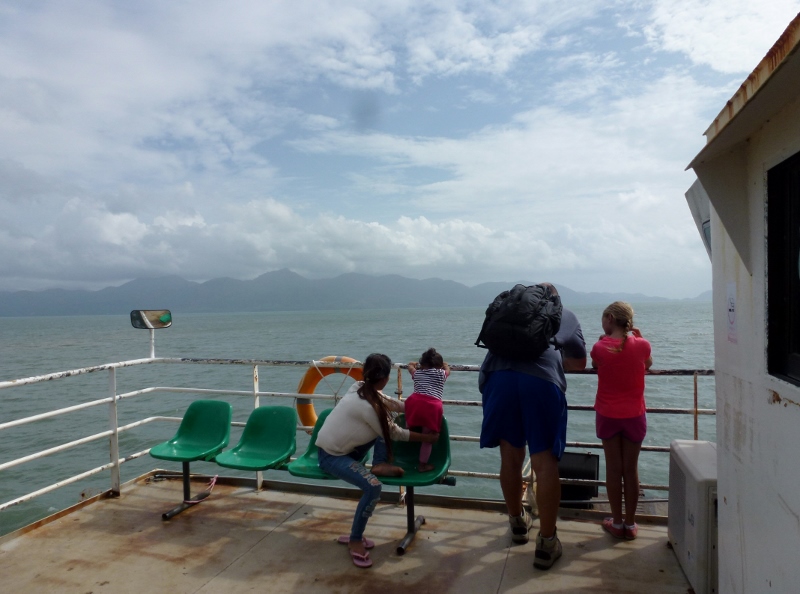 TIP
Upon arrival at the ferry port, you have the option of booking your return to Bangkok, with exact dates or open-ended.  This was 300 baht ($10) per person.  We declined as we weren’t sure if we were going back via Bangkok.

We enjoyed the ferry ride over to the island and the breeze felt great! 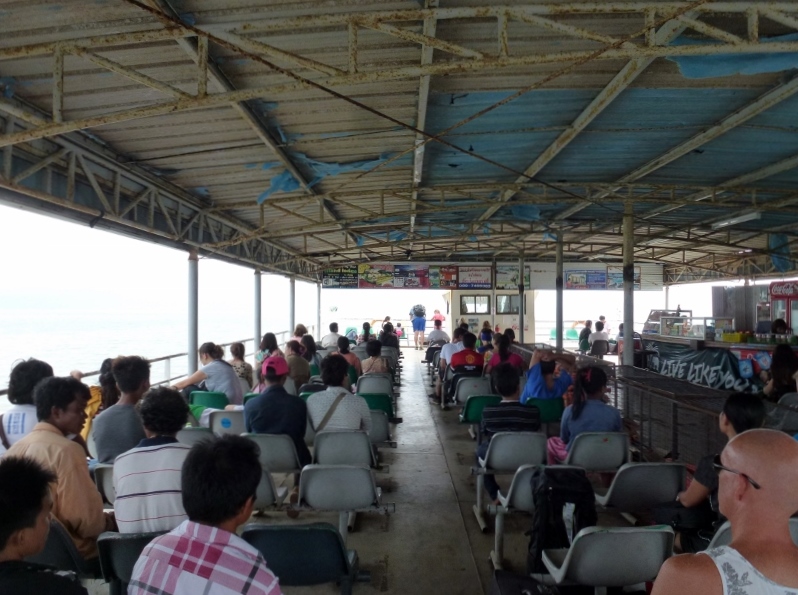 We arrived on the island and just as we thought, the taxis (songtaews) were lined up to take passengers to their hotel.

Songtaews are modified pick up trucks that serve as shared taxis.  These are very popular around Thailand.  It gets its name from the two bench seats fixed along either side of the back of the truck.

They each hold about 12 passengers and the luggage is stored up top.  The first taxi was filled up quickly and the 4 of us as well as a Dutch family of 5 were going to hop into the next taxi.  We were all traveling to the nearest beach, named White Sands.  All of the sudden the “set price” of 50 Baht per person, jumped to 100 baht per person.  Apparently, if they don’t have a full load they will charge you. 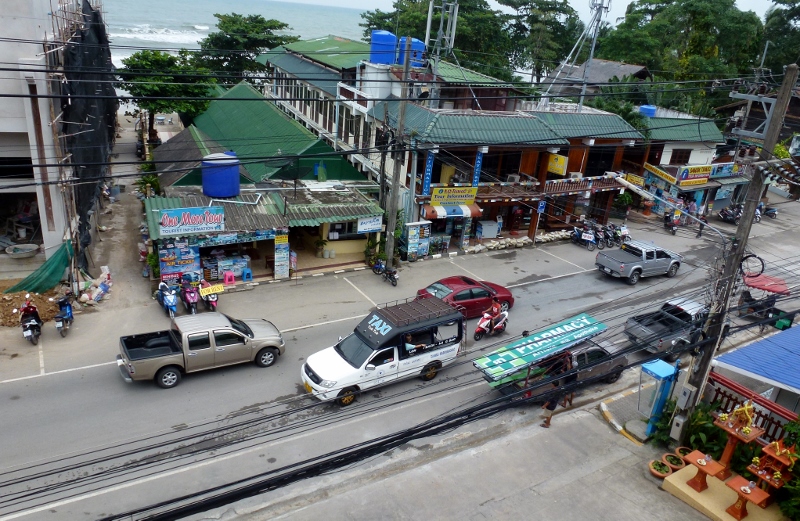 The other mother and I were both adamant that it was a set price of 50 baht.  Alan kept telling me it was just $1.50 each, but that wasn’t the point.  They were just trying to take advantage of us.  The taxi driver was very frustrated with us and said only the first taxi is 50 baht.  We would need to wait an hour for the next ferry to get on the first taxi.  What?!  We were frustrated, the driver was frustrated and rapidly sped off.

There we were in the heat sitting on a stone bench in the sun.  The entire family was mad and frustrated with me. Why didn’t we just pay the higher price.  I of course kept saying it was just feeding the cycle of taking advantage of tourists.  I didn’t want to have anything to do with that.  We were all hot, tired, hungry and just wanted to get to the hotel.  What kind of mother am I?  I was feeling very guilty, but still felt it was the right thing to do.  I need to remember I am not traveling on my own and that I need to think of the others too.

About 10 minutes later another taxi pulled up.  I approached him and the other mother came over as well.  I asked the price and he made a phone call and said it would be 80 baht each.  We took it, as the guilt was weighing heavily on me at this point.  The Dutch family came along as well and we finally made it to our hotel in Koh Chang!

Alina Grande Hotel & Resort – Very nice clean spacious rooms, with AC.  The pool was refreshing.  We had jungle and sea views and were located just across from the beach.  It was green season (monsoon/rainy), so we didn’t really see many blue skies. The sea was very rough and many riptides, so we really didn’t swim there. 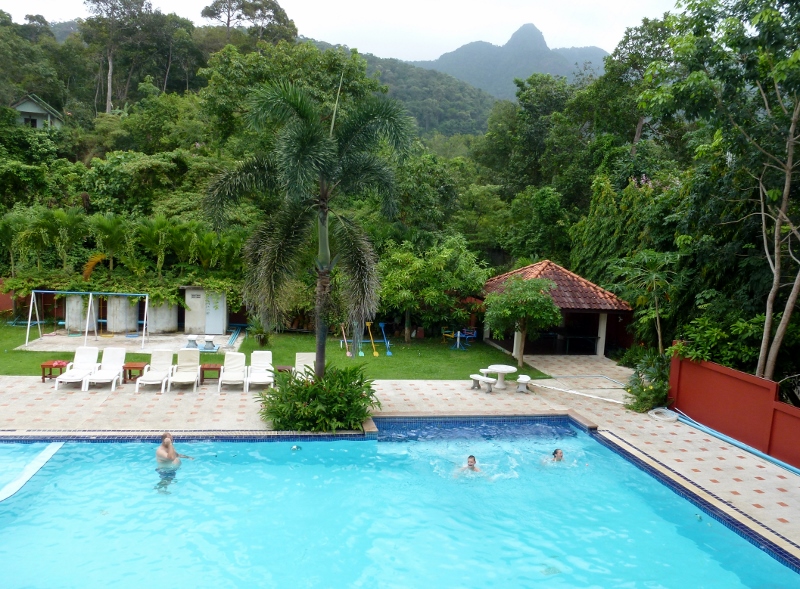 TIP
Green Season is the “rainy or monsoon” season.  It was overcast most of the time, so be prepared for cloudy skies and rough seas in green season.  Maybe once a day we had a downpour and it was very exciting!  I just love the rain.  It would come and go in about 20 minutes.  The day of our departure was a different story and it kept coming down all day. 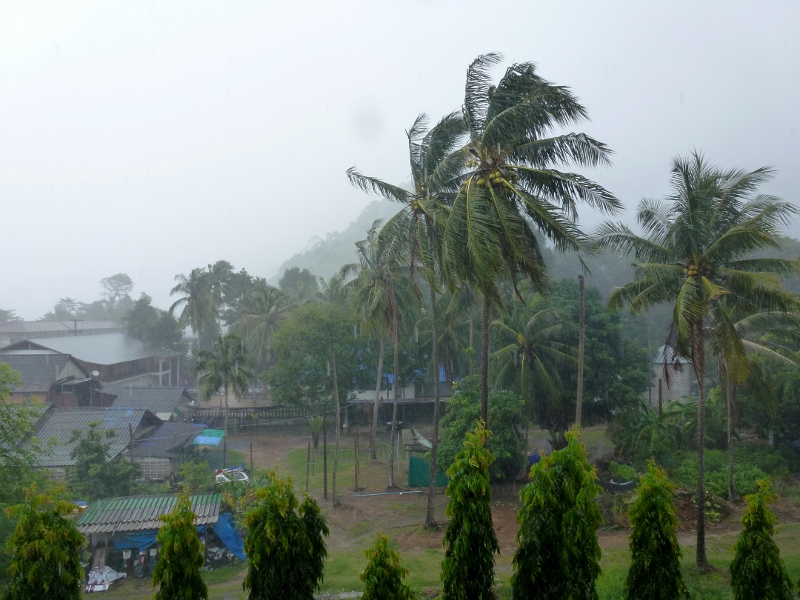 Total cost per person from Bangkok to Koh Chang $12.50