If you want to get a taste of Athens, then create your own Athens Food Tour!  You won’t have to travel far to get a taste of everything Athens has to offer.  We didn’t have the time for an organized food tour this trip, so we decided to create our own and try things along the way. 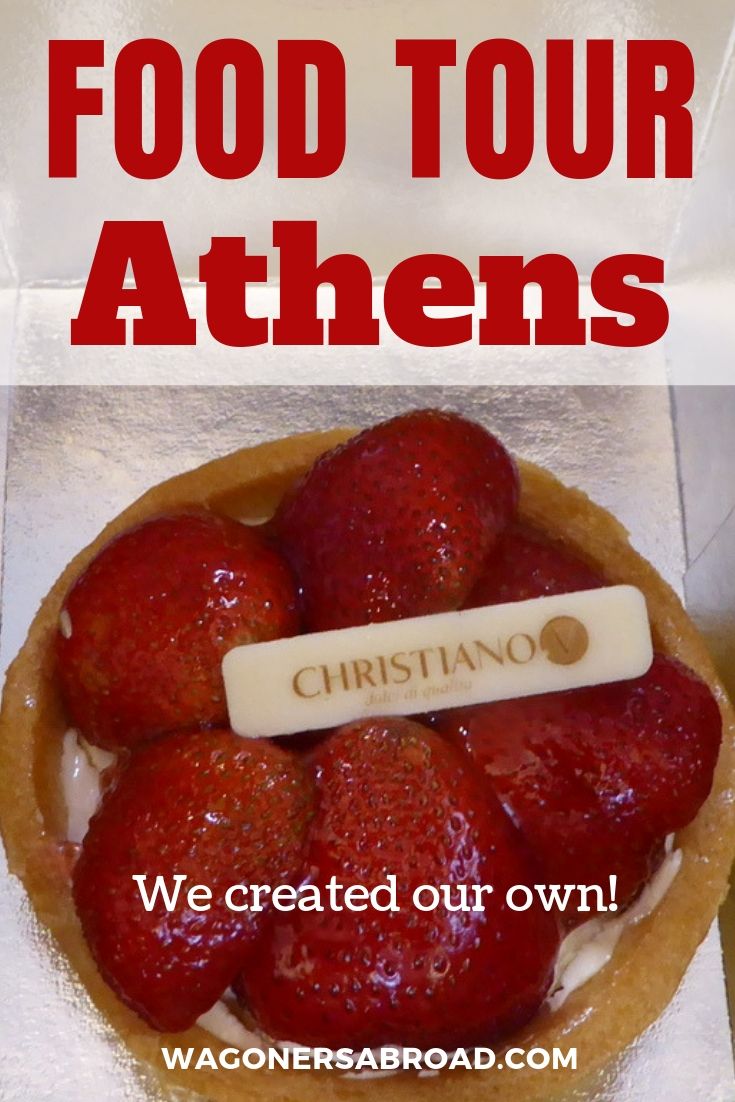 Let’s just say, we didn’t have any trouble finding delicious food while we were visiting Athens, and we even have two vegans to account for.  Rather than an organized food tour, we just sampled food as we explored the city.  It helped that we looked up which dishes to try before we arrived, that way when we spotted them we stopped for a taste.

We recommend starting at Monastiraki Square and explore that general area and then make you way down Athinias Street to the Athens Central Market.  If you cover these two general areas on your own, you won’t be disappointed.  We’ve created a map and marked a few of the locations for you to explore.

Here are some foods to look for and to try.

Skewers of meat are Souvlaki plural souvlakia, is a popular Greek fast food consisting of small pieces of meat and sometimes vegetables grilled on a skewer. 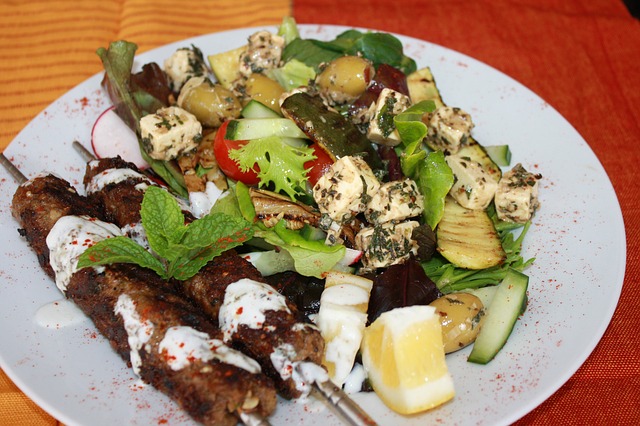 Falafel is a deep-fried ball, or a flat or doughnut-shaped patty, made from ground chickpeas, fava beans, or both. Herbs, spices, and onion relatives are commonly added to the dough.  This is the falafel platter at Savvas near Monastiraki Square. 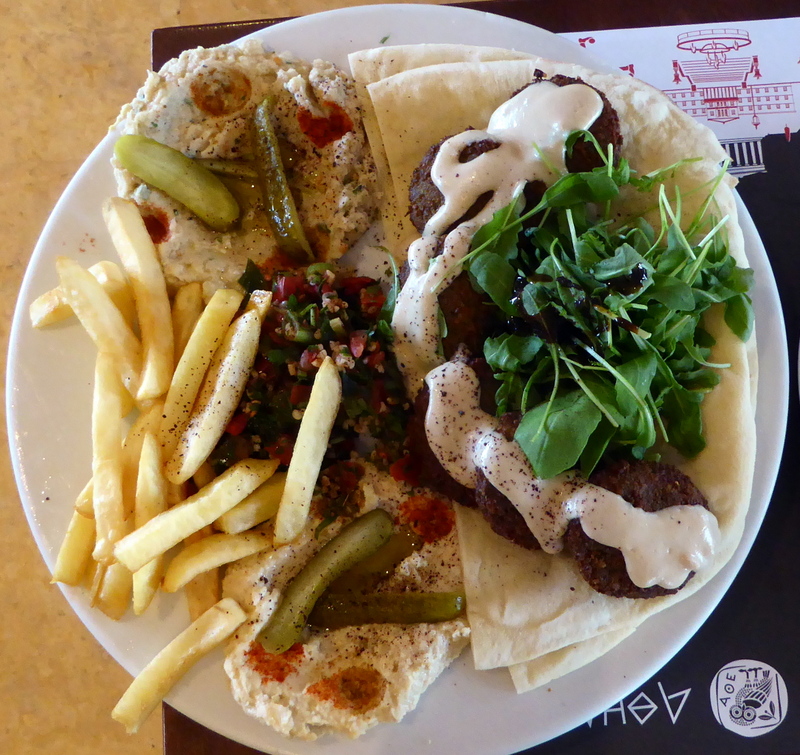 A gyro or gyros is a Greek dish made from meat cooked on a vertical rotisserie. Like a doner kebab, shawarma, or tacos al pastor.  Then stuffed into pita bread and topped with veggies and yogurt sauce.  This is certainly a family favorite.  Now that the kids are vegan, they go for the falafel. 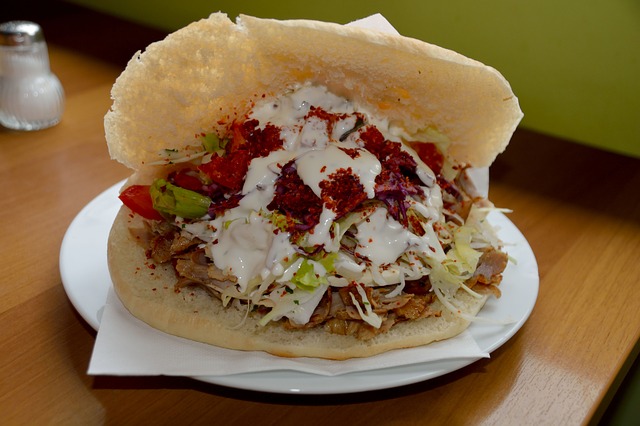 This is a wonderful sauce made from yogurt mixed with cucumbers, garlic, salt, olive oil, sometimes with vinegar or lemon juice, and herbs such as dill, mint, parsley, and thyme.  You can see it in the photos above as a topping on the dishes.

A great vegetarian appetizer made from tender vine leaves wrapped into little rolls and stuffed with rice and fresh herbs, with a touch of lemon.  Sometimes meat is also included in the stuffing. 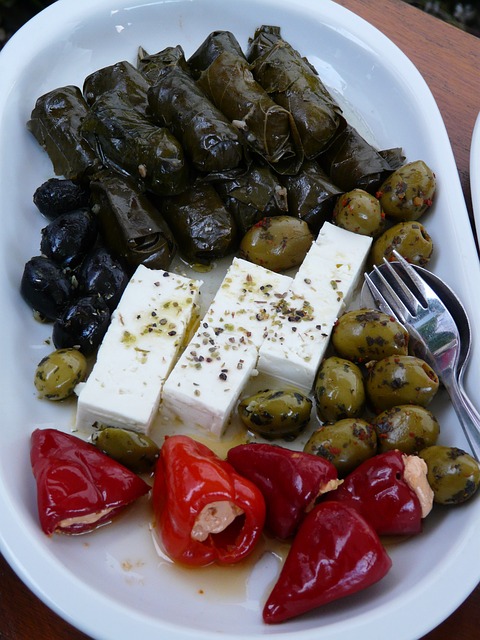 Baklava is a rich, sweet dessert pastry made of layers of filo filled with chopped nuts and sweetened and held together with syrup or honey. Yum! 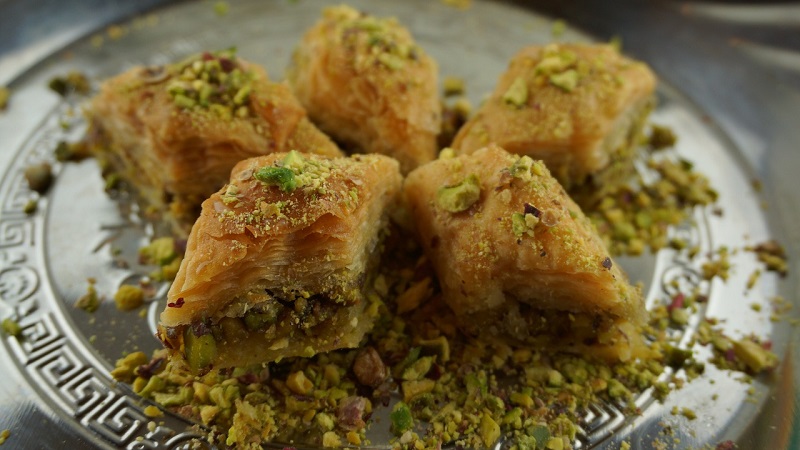 This is a Greek dessert of semolina custard filled in filo and topped with honey or syrup. It’s also known as a milk pie. 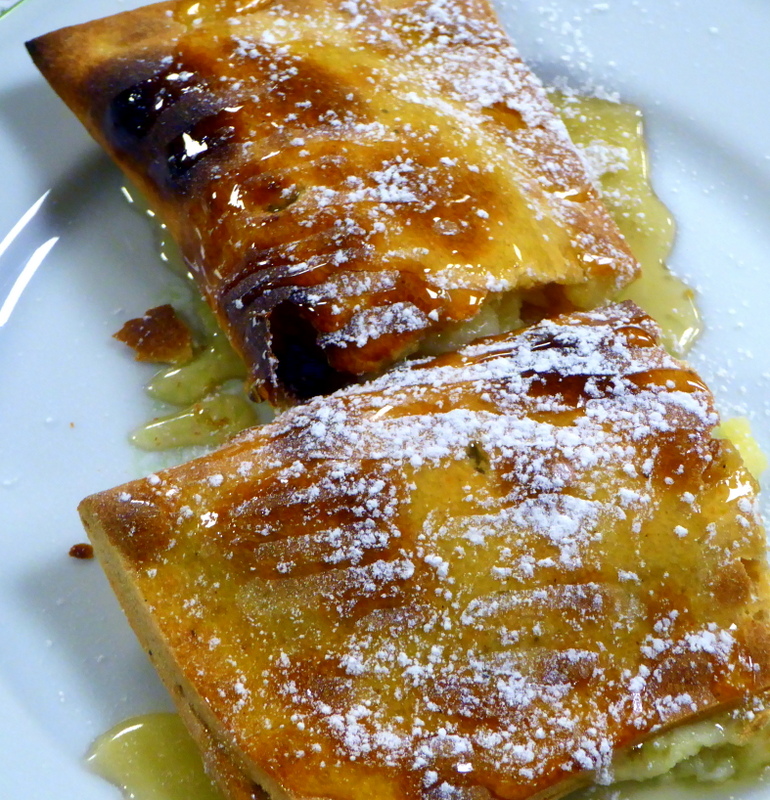 Feta is a brined curd white cheese made in Greece from sheep’s milk or from a mixture of sheep and goat’s milk. Feta is nice and crumbly cheese, perfect for topping a salad, having on bread, served with olives or even in pastries, like a spinach filo pie! 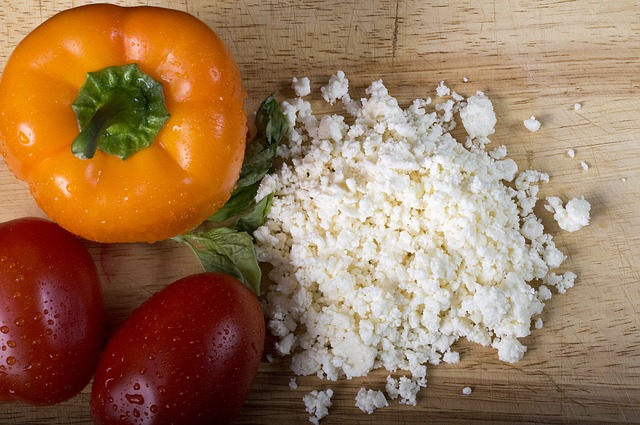 The Kalamata olive is purple in color with a hearty texture.  It is named after the city of Kalamata in the southern Peloponnese, Greece.  These are most commonly used as table olives and are typically preserved in wine vinegar or olive oil. 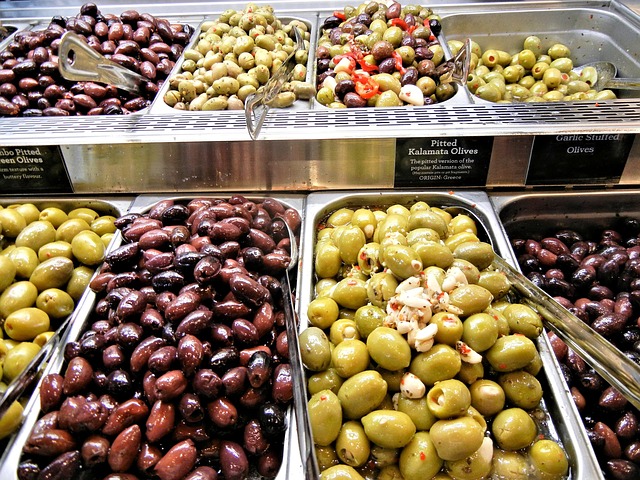 This is a ring-shaped bread topped with seeds, usually sesame seeds.  It looks like a bagel, but with the center hole very large.  It is also known well in Turkey and has been referred to as a Turkish Bagel as well.  This is wonderful paired with the olives and feta!

A fried dough delight, drenched in golden honey.  These are little balls of fried dough, similar to a donut hole.  Then topped with sweet and sticky honey.
Check out this recipe from My Greek Dish and it is their photo below. 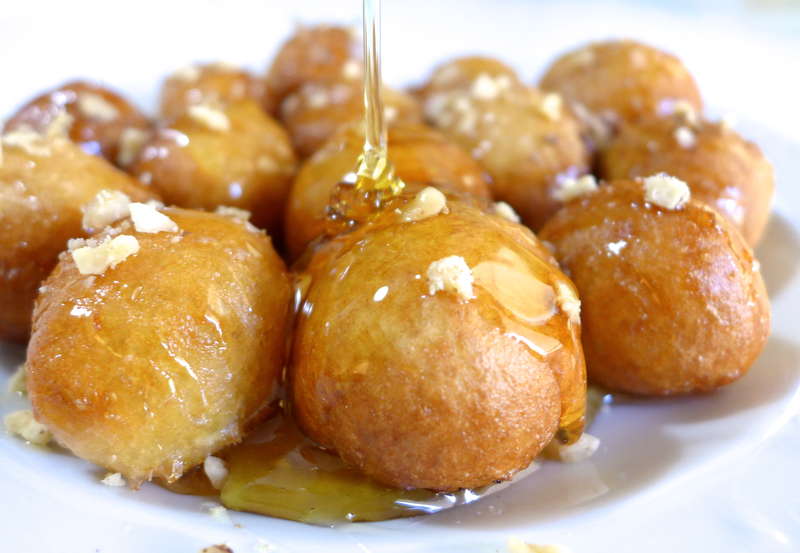 As soon as you near this street the aroma and smells lure you in further.  We had a great time roaming around this area.  There were plenty of treats to be found and even a shop dedicated to selling just flour!  Read more on the full guide to Evripidou Street (the spice street) here. 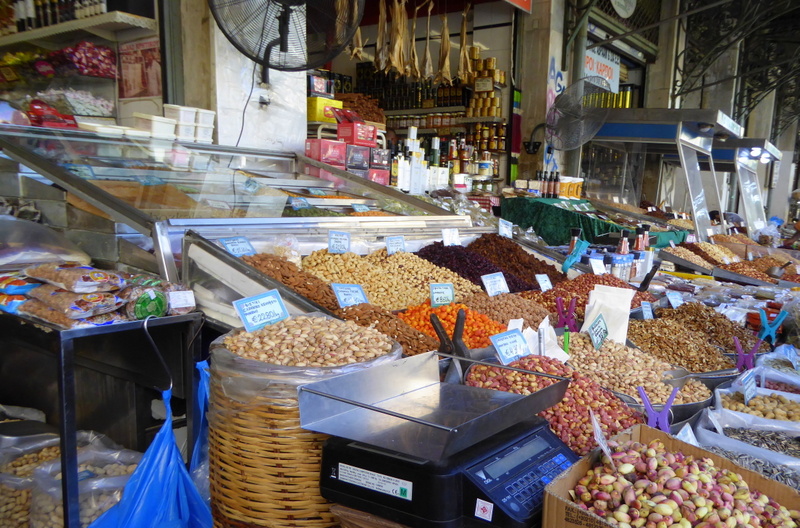 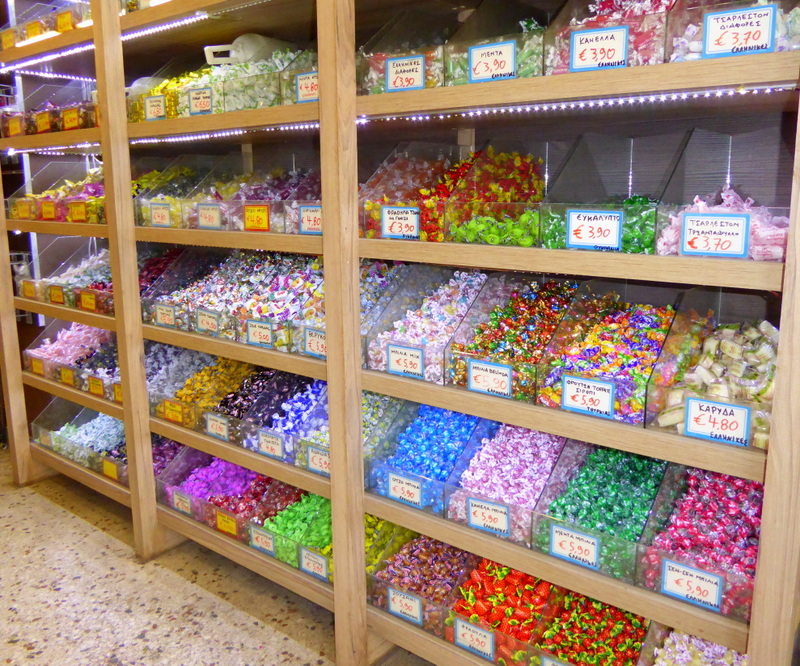 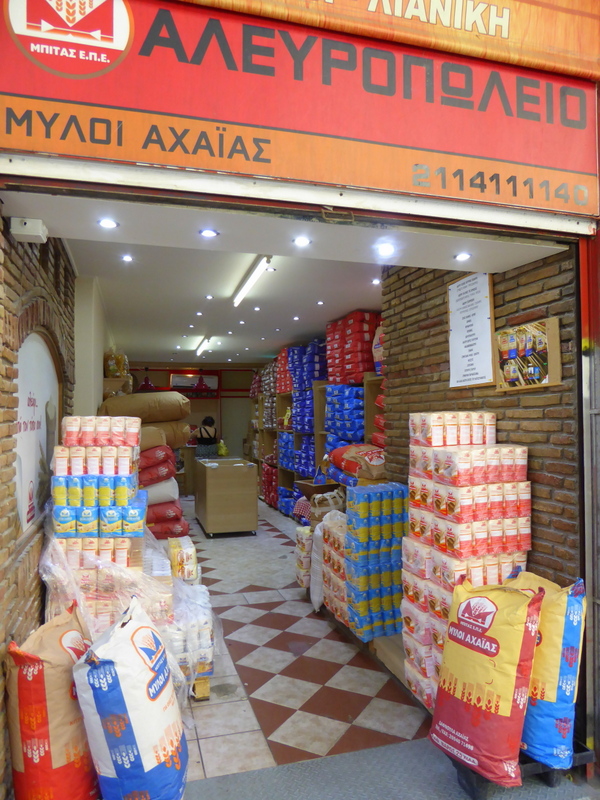 There are bakeries absolutely everywhere!  If you have a sweet tooth, this is the place to be for sure.  We loved the presentation, prices, and tastes from a place at our main metro stop at Monastiraki square, named Beneth.  Beneth is a chain of bakeries in Athens and the quality and value for money is great, but the sights and smells when you walk in are to die for!  This was a frequent stop. 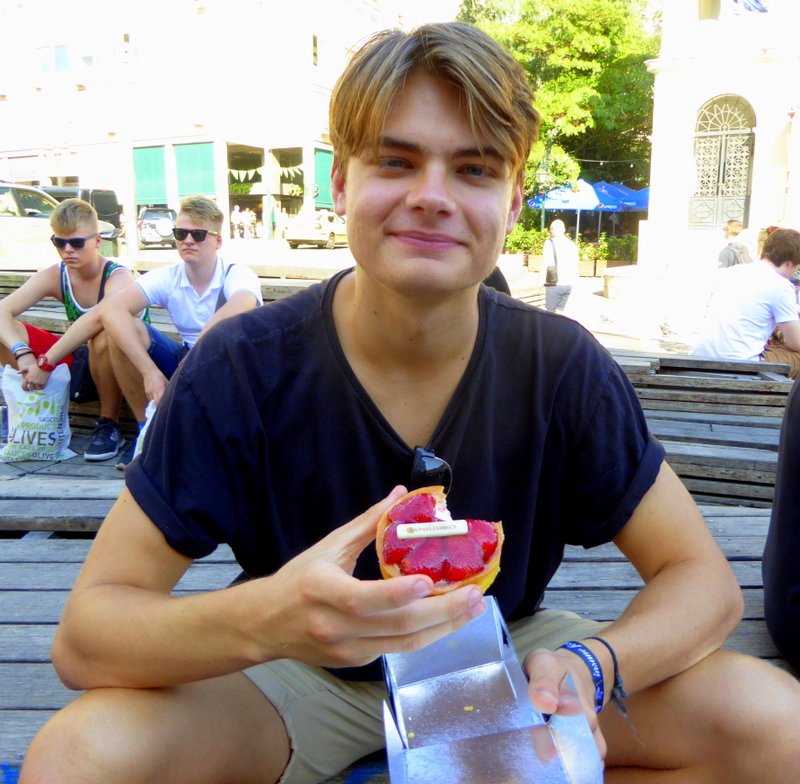 If you aren’t up for creating your own food tour and prefer something a bit more organized, then choose from one of these below.  We usually like a food tour, as we learn a bit of history and more about the culture and traditions.

Tell us about the food you like when you travel.  Do you like Greek food or Greek pastries?

2 thoughts on “Taste Of Athens Food Tour On Our Own”