While planning our trip to Greece, I happened upon a very unique activity and thought it was a must-do for our teens!  It was the Limba Rage Room Athens! 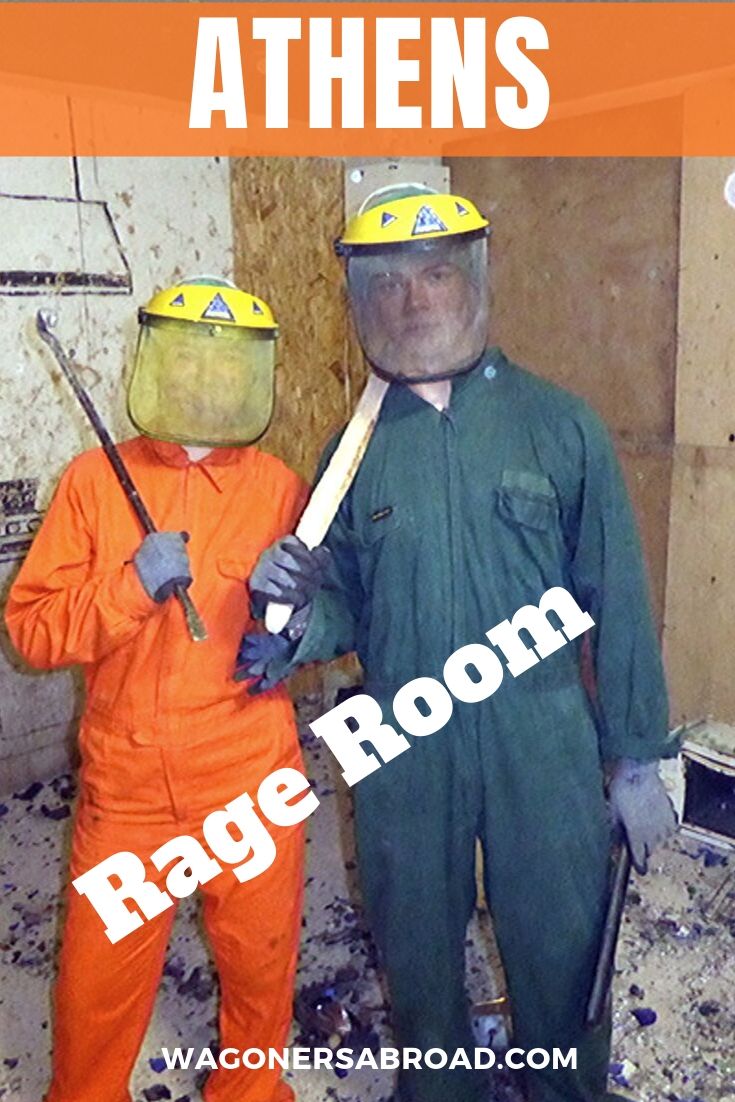 I bet you are asking, “What the heck is a rage room?!” If you’re not, then you are up with the times.  I asked that very question and had to search around a bit to figure out that it was perfect for the Wagoner kids.

I debated if I should tell them in advance or just show up and I decided to make sure they were interested.  It was a very quick “YES!” from them both.  It was important to make this holiday a good one and stress-free for the entire family.  What better way to kick it off, than to let the kids smash things up!

What is a Rage Room?

It is a self-contained room, where you are allowed to smash, break, throw and destroy everything in sight!  It is a room dedicated to letting out all of your frustrations and focusing on one thing, demolishing everything!

The company collects items that were in the garbage or recycle centers and then they bring them to the Rage Room to get smashed up!

Just across from Monastiraki Square was a small alley.  A few doors down was just a yellow door when led to a small room downstairs (kind of like a basement from the street).  We were greeted by a lovely host, signed release forms and were informed about what was about to happen.  While we were doing all of this, very loud classical music was blaring and we could hear all kinds of noise coming from the room next door, with banging, grunting and glass breaking.

We were offered several packages to choose from 5€ up to 100€+.  Each package allows you to smash up more things.  We went for the 20€ with a couple of extra a la carte items.  I think they got 8 glass bottles, 1 glass jar, a keyboard, and one big item.

The kids were getting very jazzed.  First up, it was time to look cool and put on the safety gear!  They had their jumpsuits on first and we took a few pre-rage photos. 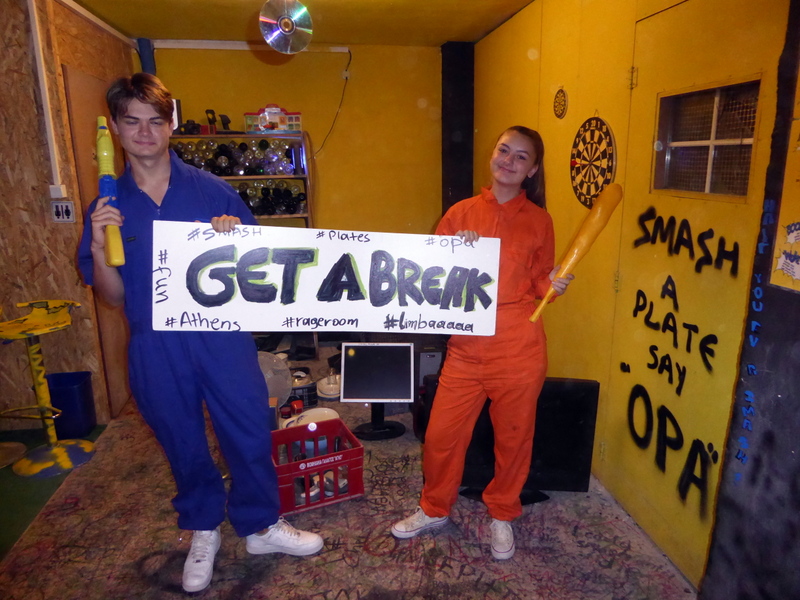 Then upon inspection and getting the head, eyes and hand gear, it was determined Lars needed to change into a jumper with long sleeves.  After a quick change, the kids were then advised to pick out the items they were going to smash.

Picking out what to break 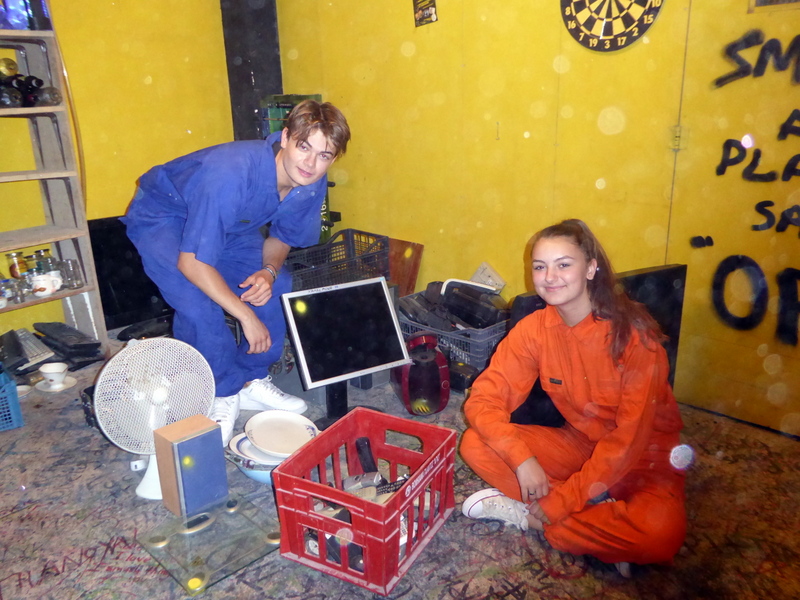 Okay, everything was ready to go and the couple who was bashing things around finally came out.  I thought the room would be cleaned up for the next set, but nope it was just adding more stuff on top of the broken stuff!  There was broken glass absolutely everywhere, a couple of crowbars leaning on the wall and a gutted microwave on the floor still intact.  They were informed they could do anything they wanted, but if they wanted to throw things it had to be against one wall in particular. 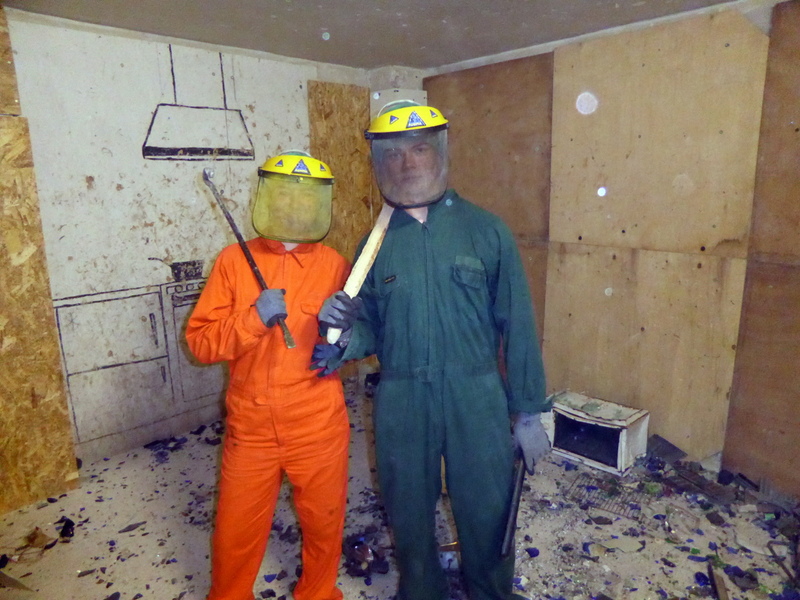 We snapped a few photos and they were off.  I stayed inside with them briefly, also covered with safety gear, but it was pointless.  There was so much dust and debris flying around, there wasn’t going to be a good photo. 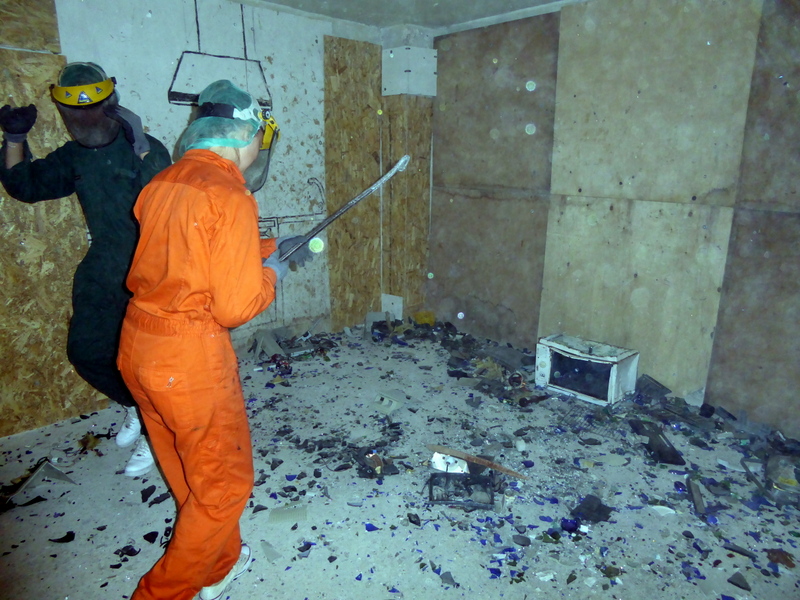 The kids got off to a timid start, but in no time they were completely demolishing all of their items.  They even moved on to the microwave that was leftover.  They beat that thing until it just fell to pieces.  Apparently it was very satisfying. 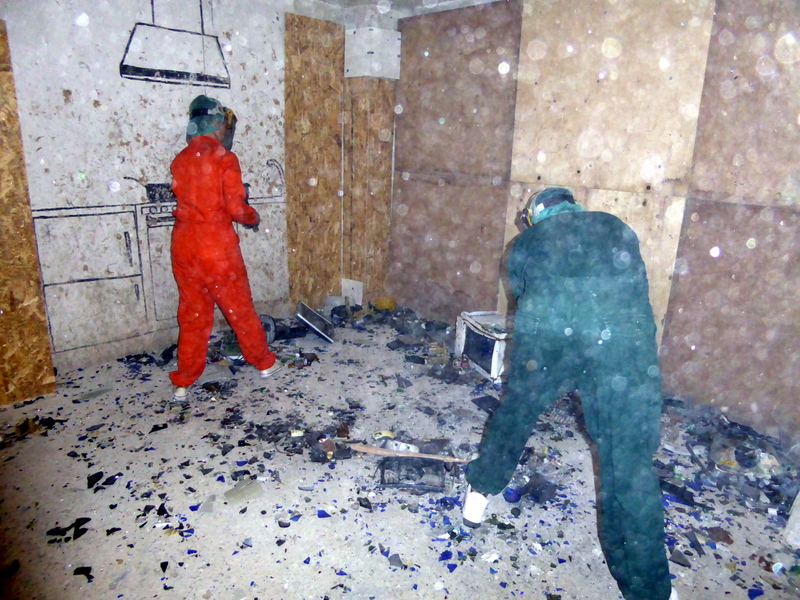 We had a little plexiglass window viewing area, off to one side.  It was so hot and humid in there, Alan finally went out to the street for some air.  I stayed down to see the kids go at it.  After about 30 minutes they came out a sweaty mess and with the biggest smiles I’ve seen on them in a long time.  They absolutely loved it and asked to do it again the next day.  We already had plans, so they just had to savor that moment. 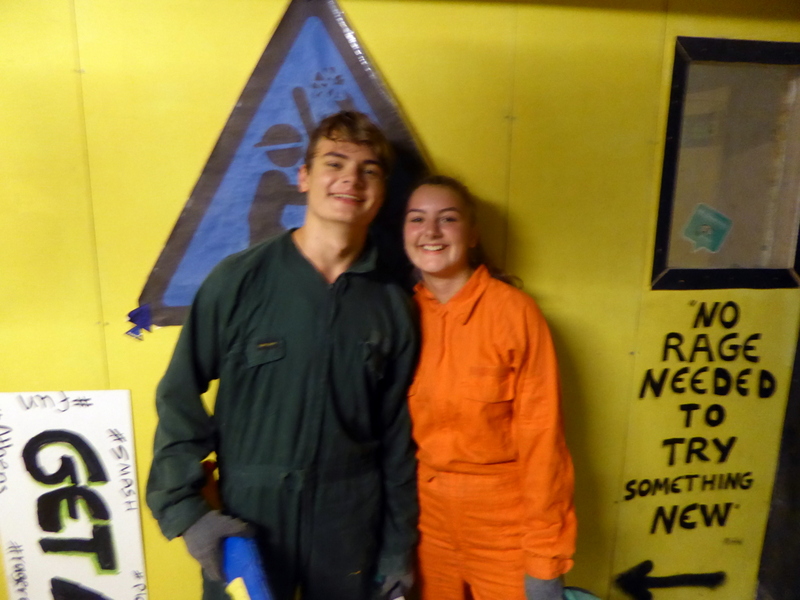 How To Book Your Rage Room

We visited on a Friday night and it seemed to be a popular “couple” thing to do.  If you are into this kind of thing, search for rage rooms on your next holiday and bash some stuff up!

Does this sound like fun to you?  Would you do this?  How about your kids?

Read our full guide for 4 days in Athens with teens.