We travelled into Austria, didn’t do any research about the area, so I had low expectations.  And as you read in Part I and Part II, I am totally sold on Austria.  Heidi and I checked out the requirements for retiring here, and it’s similar to Spain from a financial perspective, but being competent in German is a requirement (ouch).

Well our last morning, and we’re busy packing the car, and we’re about ready to go, when we hear a drum beating.  At first, we don’t think much of it, but it’s getting louder.  We go out on the balcony to check out what’s going on.  There is a big procession with banners, and a marching band. 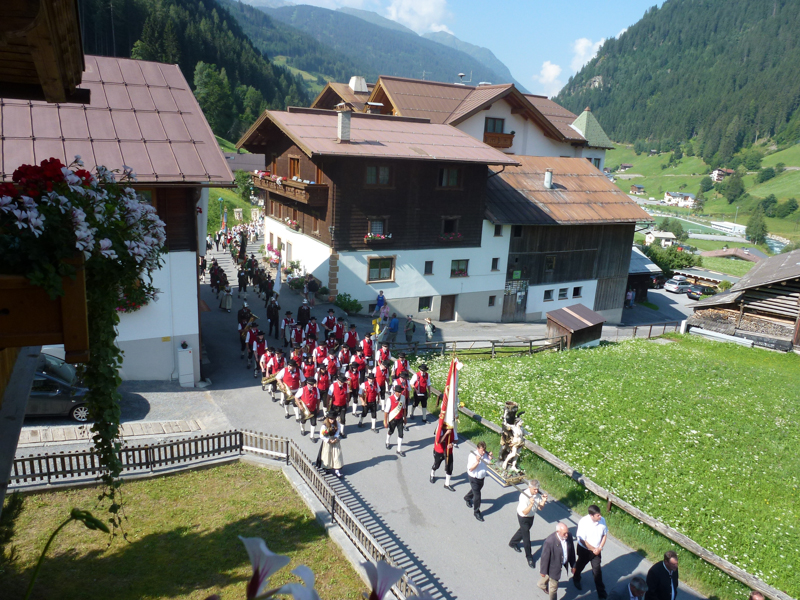 There was also a military-style group of people carrying rifles, and they’re wearing outfits that look very similar to what Revolutionary soldiers would have worn.  They are followed by a mass of people wearing traditional Austrian garb.

The procession stops for a few moments, and then a man yells what I assume to be “Ready, aim, fire!”, and the “soldiers” fire their guns.  As they are right in front of our apartment, it’s LOUD!  Check it out:

We then hear a priest speaking whose voice is being amplified speaking Latin.  At first, I thought it was a funeral procession, but nobody was crying, there wasn’t an abundance of black.  We were ready to head out, but with the procession blocking the road, we couldn’t go anywhere, so we just sat and watched.

Once the priest stopped speaking, the procession started moving again, with the drum beating away.  Since they started moving, I wasn’t sure if they were going to return the same way they came, or how long they would be, so we checked out quickly.  I asked the guy in charge about the procession, and he told me that they do it every Sunday.  So once again, the Wagoners are at the right place at the right time.

We had such a fun time in Austria that I hope we get the chance to go back.