We arrived in Hanoi, Vietnam late at night.  The streets weren’t too crowded and it seemed to be a typical city vibe for 10 pm.  There were a few pedestrians out and about and a light consistent traffic flow around our hostel.  Little did we know what we would be in for the next morning when crossing the street in Vietnam! 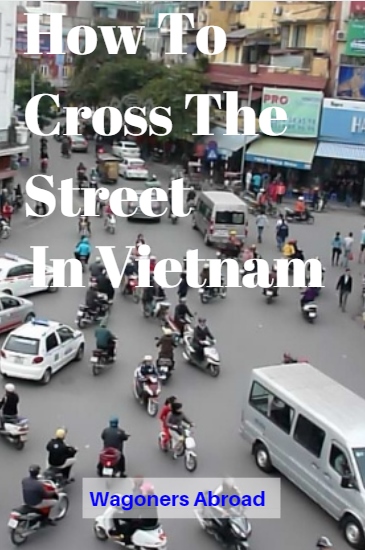 The next morning I awoke to the sound of rumbling traffic, scooters buzzing about, horns honking galore and what sounded like a blaring alarm, following by some sort of announcement on a megaphone.  It was 7:00 am and I just had to go outside to see what all of the noise was about.  I left Alan and Anya to sleep and down the 2 flights of stairs I went and out the front door to the street.

It was just a 2 lane road in the Old Quarter of Hanoi, but it was very active. I was amazed at how a few little hours could make such a difference.  In my mind, it was way too early for commute traffic.  I was apparently wrong.  I looked to the left and to the right and it was a constant and rapid flow.  As I glanced to my right, I noticed Gma Bev a couple of buildings down, leaning on the light post taking video of the traffic.

Of course I walked down for a quick morning chat.  She too was amazed by all of the traffic.  She had already walked to either end of our block and around the corners as well.  We both had no idea how we would ever be able to cross the street.  There were no traffic lights to be found and there was no traffic stopping either.  It was just a steady flow of cars, buses, trucks and scooters.  How is it possible people are crossing the street in Vietnam? 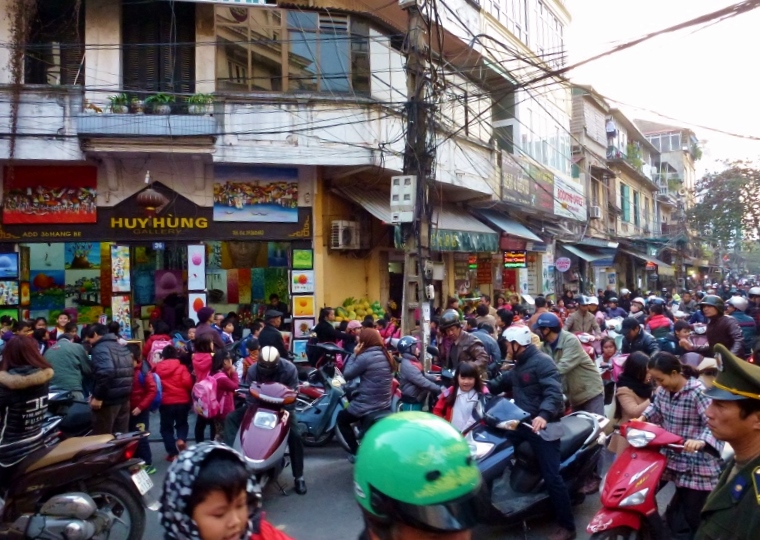 Our hostel was located on one city block that was very small.  You could walk all of the way around the block in less than a couple of minutes.  It was as if we were on a small city island and had no idea how to cross the fast flowing river in front of us.  We had a little giggle about how we would starve to death if we didn’t get off of our “island”, as all of the restaurants were across the street. 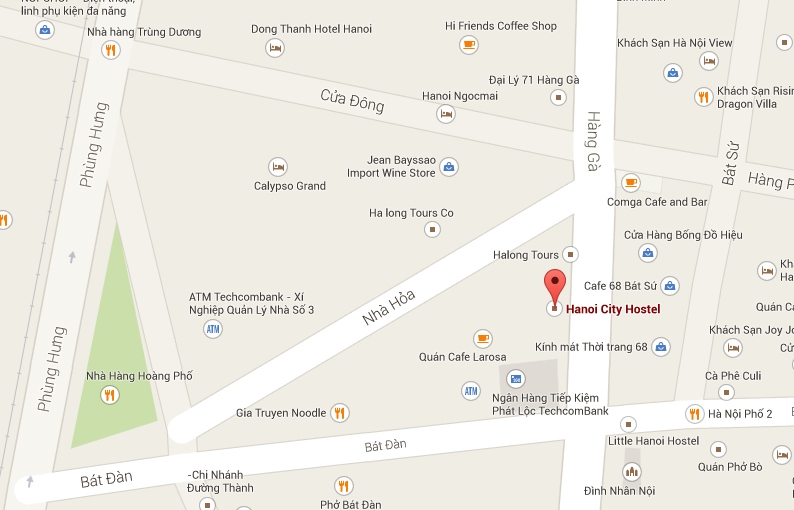 We took a quick walk together around the back of the block, along the smaller single lane streets.  We practiced crossing in these areas first, but it was terrifying.  We didn’t get hit, but it was difficult to navigate, so we just returned back to the hostel and waited for the rest of the family to rise for the day.

Once everyone was awake, we enjoyed our included breakfast and decided we wanted to go out and explore the city.  As we departed, we dropped our room keys off at the front desk.  At that time, I made a quick joke about crossing the street to the receptionist.  I also asked if there was any magical trick to crossing the street and to my surprise, she said there was.

Detailed instructions for how to cross the street in Vietnam!

She said we needed to think of the traffic as if it were flowing water in the river.  The traffic “water” would naturally flow around the obstacles in its path.  She also gave me instructions to follow to make it easier for us to cross.  I thanked her, and we were off!

This information was quickly disseminated among the family members and within 30 seconds we needed to put it to use.  We needed to cross our first street!

We followed the instructions to the tee and it worked!

Oh My! It worked!  How can that be?  I know how to cross the street in Vietnam.  I didn’t think it could be done.

It just went against everything we were raised to do and be, when crossing a street. 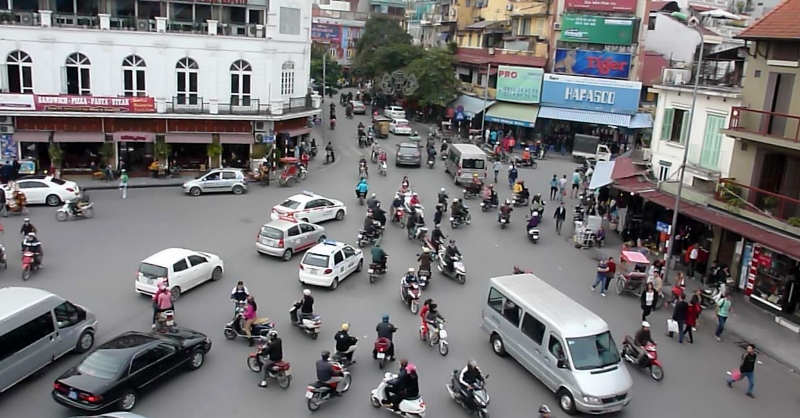 We had plenty of practice during out 5 nights in Hanoi and became really good at it as well. In fact we were getting pretty confident.  We even crossed the highway, just like a local.  Well, it may not have looked as slick and smooth as a local, but we were impressed with ourselves.

Okay, so are you ready for your lesson?

How to cross the street in Vietnam!

Believe me, if you follow these steps, it will be as if you have some super power invisashield around you.

Invisashield = It’s as if nothing can touch you within arms reach from head to toe. No one can see it, but it is your zone and yours alone.  It’s a sphere of “can’t touch this” emanating from your body.  You are invincible and no one will hurt you.

How To Cross The Street In Vietnam Video by Lars Wagoner

With this newly acquired skill, we were now experts at crossing the street.  We could go where all local men have gone before.

We were da bomb!

We put our skills to use for the next few weeks during our time in Hue, Hoi An and Ho Chi Minh City (HCMC) too.  Our confidence was tested a bit in HCMC, as the traffic was far busier than it was in Hanoi.

Did you know it has a population of nearly 9 million people and there are over 3 million registered scooters!  Yep, it was packed with scooters and about 3 lanes wide (not that lanes are observed) on either side of the road.  This was the big time.  We mastered our skill and graduated from the school of crossing the street in Vietnam. But it was really put to the test on New Years Eve. There were so many scooters and people, you couldn’t differentiate between the roads, sidewalks, parks or restaurants.

On this night traffic was absolute insane.  It was like a sea of scooters driving on any surface they could find.  As far as the eye could see, scooters were everywhere. It felt like an army of scooter ants took over the city.  There was no looking left and right, they drive on any side of the street or sidewalk and even in the wrong direction. It is as if the rules just don’t apply to a scooter.  I was even getting so confident that on New Years Eve, I felt as if it would be wise to just control the traffic.

It was about 11:00 pm and we were heading back from being out in the thick of the city party.  Trying to cross the big streets jam-packed with non moving scooters was proving to be a challenge.  I noticed 2 kids (maybe 8 or 10 yrs old) with a bike, trying to cross the same direction we were.  They were getting no where fast and we were in the middle of this scooter pedestrian mosh pit.

I decided to step in front of them and just place my hand on the car or scooter that was about to move forward in my path.  I did the wave the hand thing and it worked!  People actually let us cross.  It still wasn’t easy as we needed to wait for traffic to actually move enough for us to squeeze between the scooters and cars, but we did it.  Once we were on the other side. the two little local kids yelled out a big “Thank You!” in English.  It was so sweet.

Anyway, I think I was getting a little too cocky, but it all worked and we came out unscathed.  Something else was gained from the new skill as well.  For me, I am less stress when we are driving around all of these countries.  I no longer have that permanent state of fear while being transported.  Yep, it is pretty much gone.  That is until we are over taking the car in front and the oncoming bus or truck is about to hit us.  I still get a little panic at that moment, but the general driving and flow I now trust. 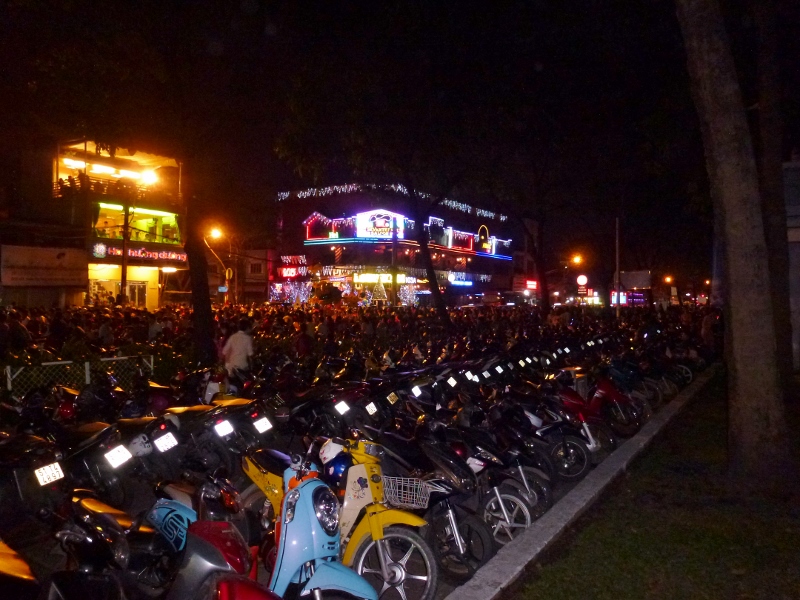 Okay, so what about you?  Tell me your stories, I really want to hear.  Have you tried to cross the street in Vietnam? What is your trick?  Do you follow these same steps or do you have some different advice to add?

8 thoughts on “How To Cross The Street In Vietnam”